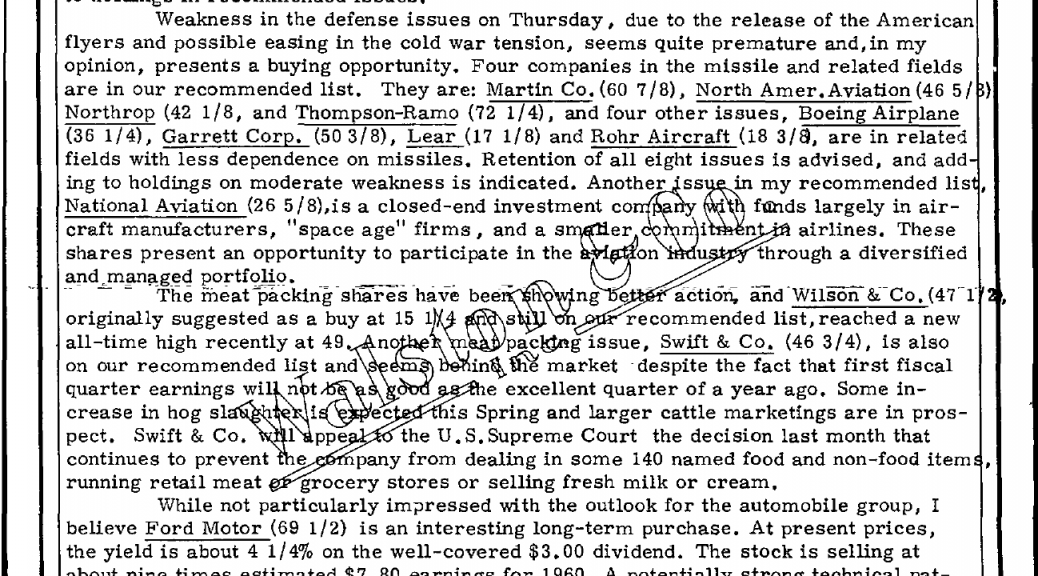 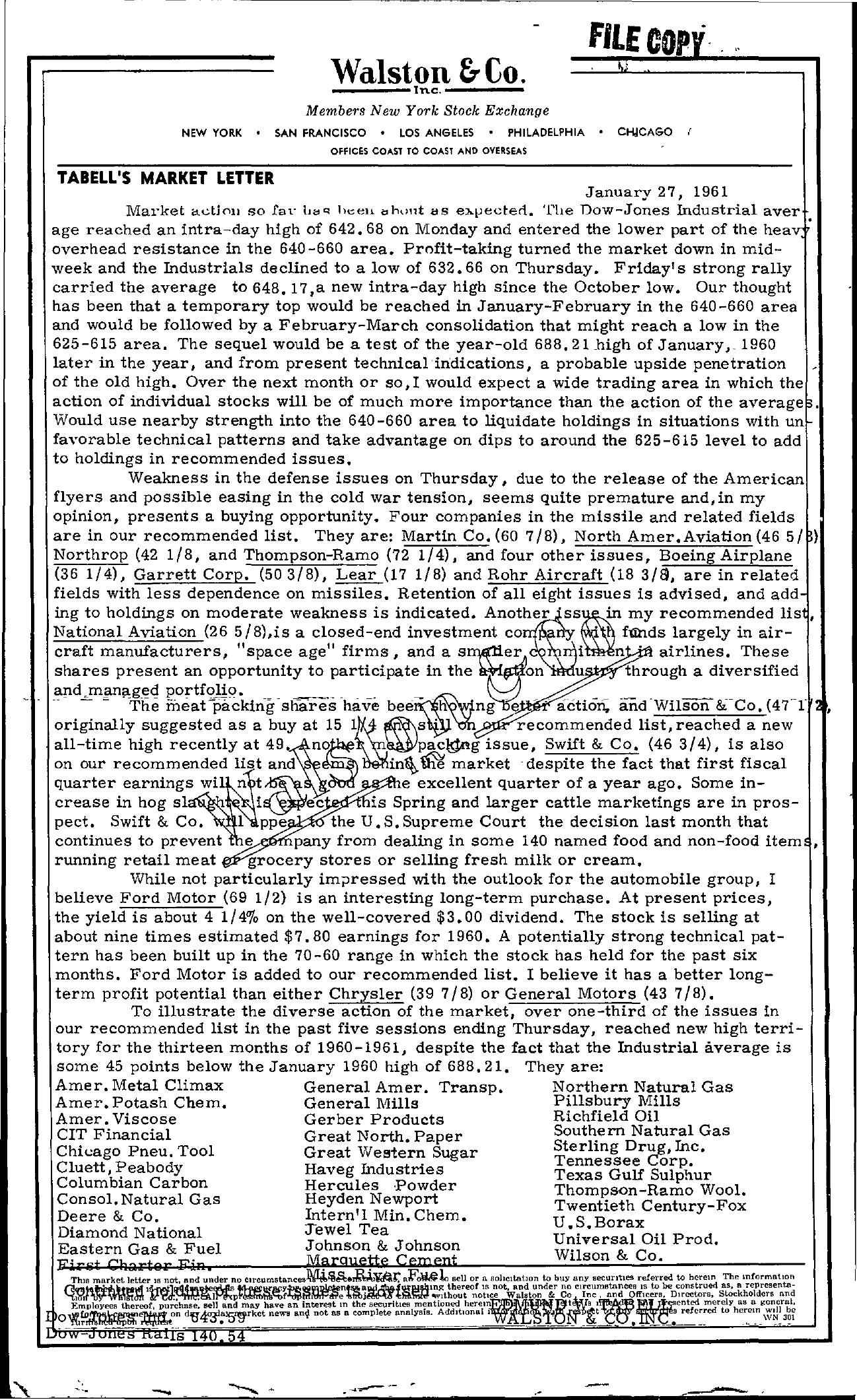 Walston &- Co. Inc. – – – – – fiLE COpy . Members New York Stock Exchange NEW YORK SAN FRANCISCO LOS ANGELES PHILADELPHIA CI-\ICAGO I OffiCES COAST TO COAST AND OVERSEAS TABELL'S MARKET LETTER January 27, 1961 Market actinll so far bq h.,eH hu11t ,,9 eJ.Jecten. The Dow-Jones Industrial aver. age reached an intra-day high of 642.68 on Monday and entered the lower part of the heav; overhead resistance in the 640 -660 area. Profit-taking turned the market down in mid- week and the Industrials declined to a low of 632.66 on Thursday. Friday's strong rally carried the average to 648. 17 ,a new intra-day high since the October low. Our thought has been that a temporary top would be reached in January-February in the 640-660 area and would be followed by a February-March consolidation that might reach a low in the 625-615 area. The sequel would be a test of the year-old 688.21 .high of January,. 1960 later in the year, and from present technical indications, a probable upside penetration of the old high. Over the next month or so, I would expect a wide trading area in which the action of individual stocks will be of much more importance than the action of the average . Would use nearby strength into the 640-660 area to liquidate holdings in situations with un favorable technical patterns and take advantage on dips to around the 625-615 level to add to holdings in recommended issues. Weakness in the defense issues on Thursday, due to the release of the American flyers and possible easing in the cold war tension, seems quite premature and, in my opinion, presents a buying opportunity. Four companies in the missile and related fields are in our recommended list. They are Martin Co.(60 7/8), North Amer.Aviation(46 Northrop (42 1/8, and Thompson-Ramo (72 1/4), and four other issues, Boeing Airplane (36 1/4), Garrett Corp. (503/8), Lear (17 1/8) and Rohr Aircraft (18 3/a, are in related fields with less dependence on missiles. Retention of all eight issues is advised, and add- ing to holdings on moderate weakness is indicated. . my recommended lis , National Aviation (26 5/8),is a closed-end investment co fends largely in air- craft manufacturers, space age firms, and a i n airlines. These ' to in the . on .u. . a . The meat packing shares have e . action. and Wllson & Co. (47 112, originally suggested as a buy at 15 recommended list, reached a new all-time high recently at on our recommended list and issue, Swift & Co. (463/4), is also market .despite the fact that first fiscal quarter n excellent quarter of a year ago. Some in- crease in hog sl Spring and larger cattle marketings are in pros- pect. Swift & Co. 1 ppe the U. S. Supreme Court the decision last month that continues to prevent e pany from dealing in some 140 named food and non-food item , running retail meat grocery stores or selling fresh milk or cream. While not particularly impressed with the outlook for the automobile group, I believe Ford Motor (69 1/2) is an interesting long-term purchase. At present prices, the yield is about 4 1/4 on the well-covered 3.00 dividend. The stock is selling at about nine times estimated 7.80 earnings for 1960. A potentially strong technical pat- tern has been built up in the 70-60 range in which the stock has held for the past six months. Ford Motor is added to our recommended list. I believe it has a better long- term profit potential than either Chrysler (39 7/8) or General Motors (43 7/8). To illustrate the diverse action of the market, over one-third of the issues in our recommended list in the past five sessions ending Thursday, reached new high terri- tory for the thirteen months of 1960-1961, despite the fact that the Industrial average is some 45 points below the January 1960 high of 688.21. They are Amer. Metal Climax Amer. Potash Chem. Amer. Viscose CIT Financial Chiago Pneu. Tool Cluett , P. eab 0 dy Columblan Carbon Consol.Natural Gas Deere & Co. Diamond National Eastern Gas & Fuel F t Cl;t t W General Amer. Transp. General Mills Gerber Products Great North. Paper Great Weetern Sugar Haveg Industn.es Hercules Powder Ne.wport Intern 1 Mm. Chem. Jewel Tea Johnson & Johnson Marquette Cement Northern Natural Gas Pillsbury Mills Richfield Oil Sout'ern Natural Gas Sterhng Drug, Inc. TTeexnansesGseuelf CSourlpph. ur Thompson-Ramo Wool. Twentieth Century-Fox U S Borax '. . 011 Prod. Wllson & Co. -'. .-