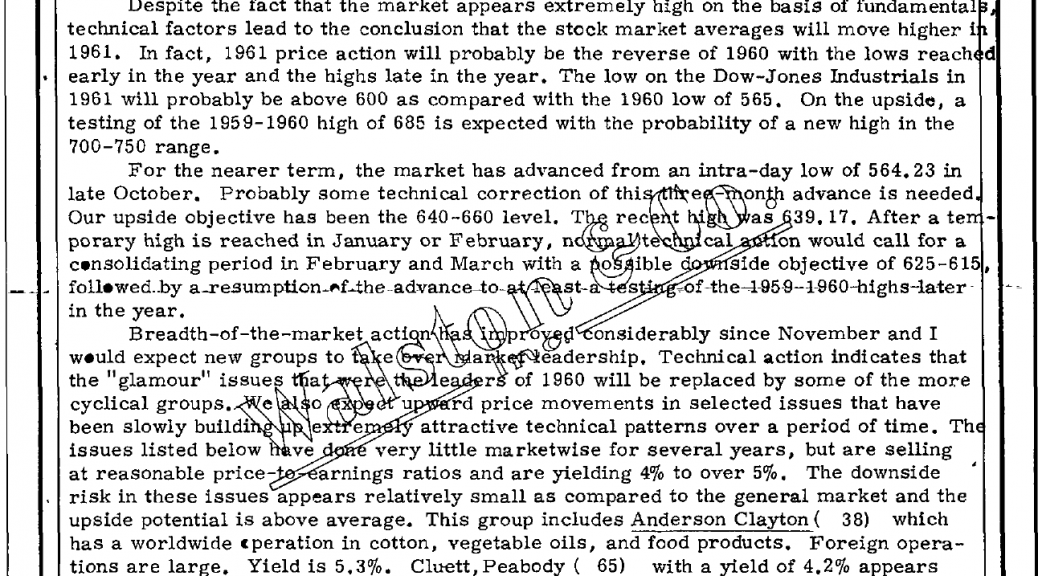 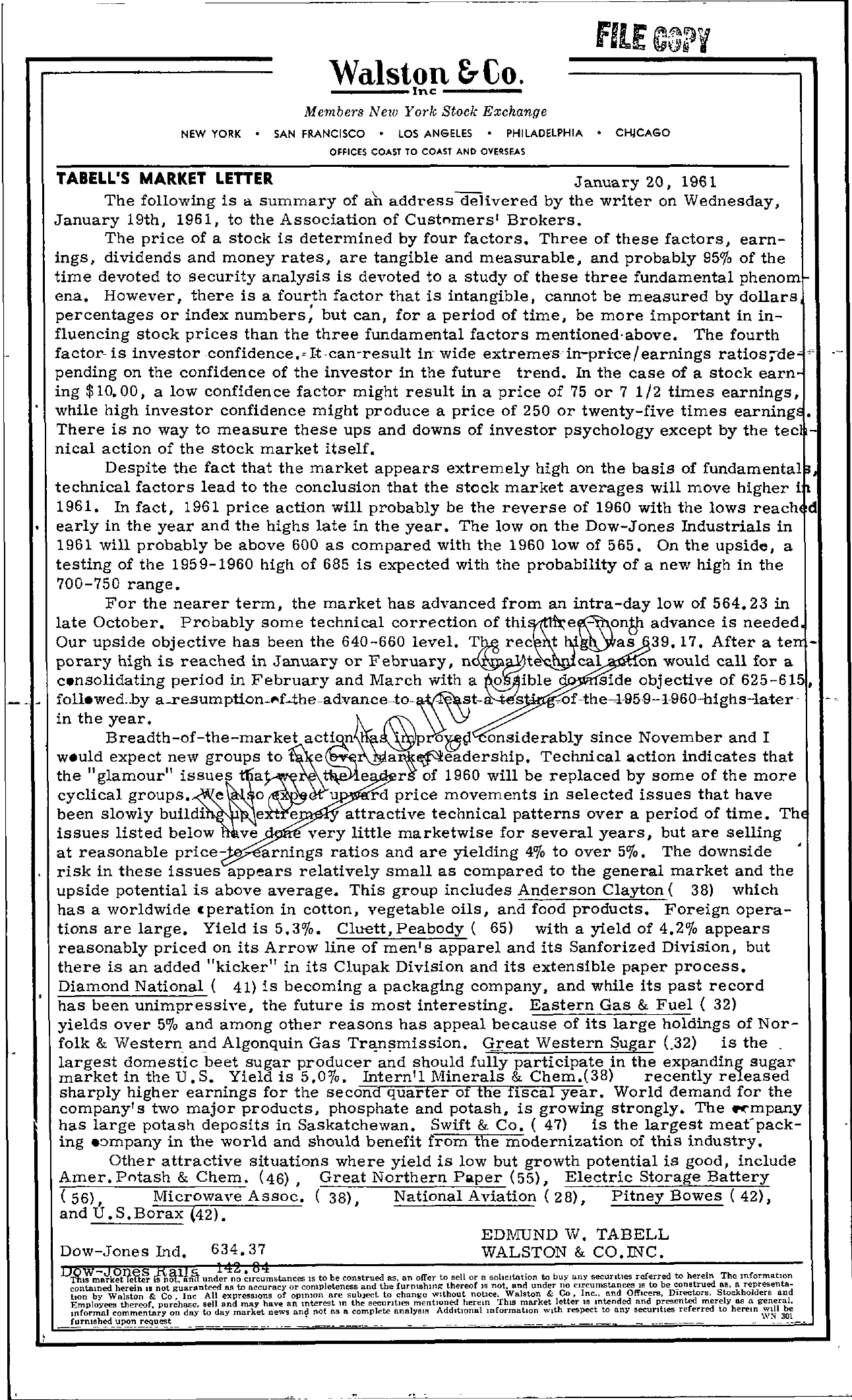 Walston &Co.– Inc Members New York Stock Exchange NEW YORK SAN FRANCISCO LOS ANGELES PHILADELPHIA CHjCAGO OFFICES COAST TO COAST AND OVERSEAS TABELL'S MARKET LETTER January 20, 1961 The following is a summary of a'll address delivered by the writer on Wednesday, January 19th, 1961, to the Association of Custnmers' Brokers. The price of a stock is determined by four factors. Three of these factors, earn- ings, dividends and money rates, are tangible and measurable, and probably 950/0 of the time devoted to security analysis is devoted to a study of these three fundamental phenom ena. However, there is a fourth factor that is intangible, cannot be measured by dollars percentages or index numbers; but can, for a period of time, be more important in in- fluencing stock prices than the three fundamental factors mentioned above. The fourth factor- is It can-result in wide ell.-tremesin-price / earnings ratios,de – pending on the confidence of the investor in the future trend. In the case of a stock earn ing 10.00, a low confidence factor might result in a price of 75 or 7 1/2 times earnings, while high investor confidence might produce a price of 250 or twenty-five times earning There is no way to measure these ups and downs of investor psychology except by the tec – nical action of the stock market itself. Despite the fact that the market appears extremely high on the basis of fundamental technical factors lead to the conclusion that the stock market ayerages will move higher i 1961. In fact, 1961 price action will probably be the reverse of 1960 with the lows reach d early in the year and the highs late in the year. The low on the Dow-Jones Industrials in 1961 will probably be above 600 as compared with the 1960 low of 565. On the upside, a testing of the 1959-1960 high of 685 is expected with the probability of a new high in the 700-750 range. For the nearer term, the market has advanced from an intra-day low of 564.23 in late October. Probably some technical correction of advance is needed Our upside objective has been the 640-660 level. rec t .'gl0kas 39.17. After a te – porary high is reached in January or February, cal on would call for a censolidating period in February and March with a side objective of 625-615, foUewed ..by in the year. Breadth-of-the-market onsiderably since November and I weuld expect new groups to Technical action indicates that the glamour e of 1960 will be replaced by some of the more cyclical groups. e 0 u rd price movements in selected issues that have been slowly buildi ee attractive technical patterns over a period of time. Th issues listed below ve very little marketwise for several years, but are selling at reasonable price- arnings ratios and are yielding 40/0 to over 50/0. The downside risk in these issues appears relatively small as compared to the general market and the upside potential is above average. This group includes Anderson Clayton ( 38) which has a worldwide 'peration in cotton, vegetable oilS, and food products. Foreign opera- tions are large. Yield is 5.30/0. Cluett, Peabody ( 65) with a yield of 4.20/0 appears reasonably priced on its Arrow line of men's apparel and its Sanforized Division, but there is an added kicker in its Clupak Division and its extensible paper process. Diamond National ( 41) is becoming a packaging company, and while its past record has been unimpressive, the future is most interesting. Eastern Gas & Fuel ( 32) yields over 50/0 and among other reasons has appeal because of its large holdings of Nor- folk & Western and Algonquin Gas Great Western Sugar (.32) is the largest domestic beet sugar producer and should fully participate in the expanding sugar market in the U. S. Yield is 5.0'/0. Intern'l Minerals & Chem.(38) recently released sharply higher earnings for the second quarter of the hscal year. World demand for the company's two major products, phosphate and potash, is growing strongly. The mpany has large potash deposits in Saskatchewan. Swift & Co. (47) is the largest meat-packing e)mpany in the world and should benefit from the modernization of this industry. Other attractive situations where yield is low but growth potential is good, include Amer. Pntash & Chern. (46), Great Northern Paper (55), Electric Storage Battery ( 56), Microwave Assoc. ( 38), National Aviation (28), Pitney Bowes ( 42). and U.S.Borax (42). Dow-Jones Ind. 634.37 EDMUND W. TABELL WALSTON & CO. INC. is under no as, an offer aIS to be construed to sell or soliCItation to buy any SeeUritleli referred to herein The mformahon contamed herein 18 not guaranteed Il.B to accuracy or cOnlpleteness and the thereo! IS not, and under no circumstances IS to be ,onstrued as, a representa- tion by Walston & Co Inc All expresSlQns of OPlnlon are subject to change Without nobce. Walston & Co, Inc.. and Officers, Directors. Stockholders and Employee!! thereof, sell and may have an mterest m the SecUrities mentlOned herem ThIS market letter IS mtended and presented merely WI a general. mformal commentary on day to day market news ang not as a complete analYSIS AdditIOnal mformatlon With respect to any secUrities referred to herem ..