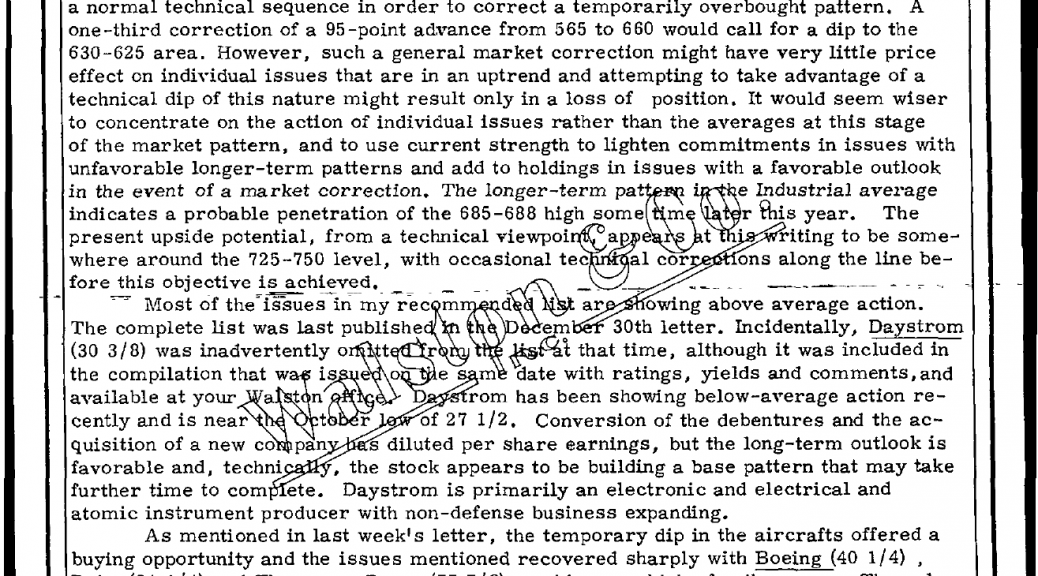 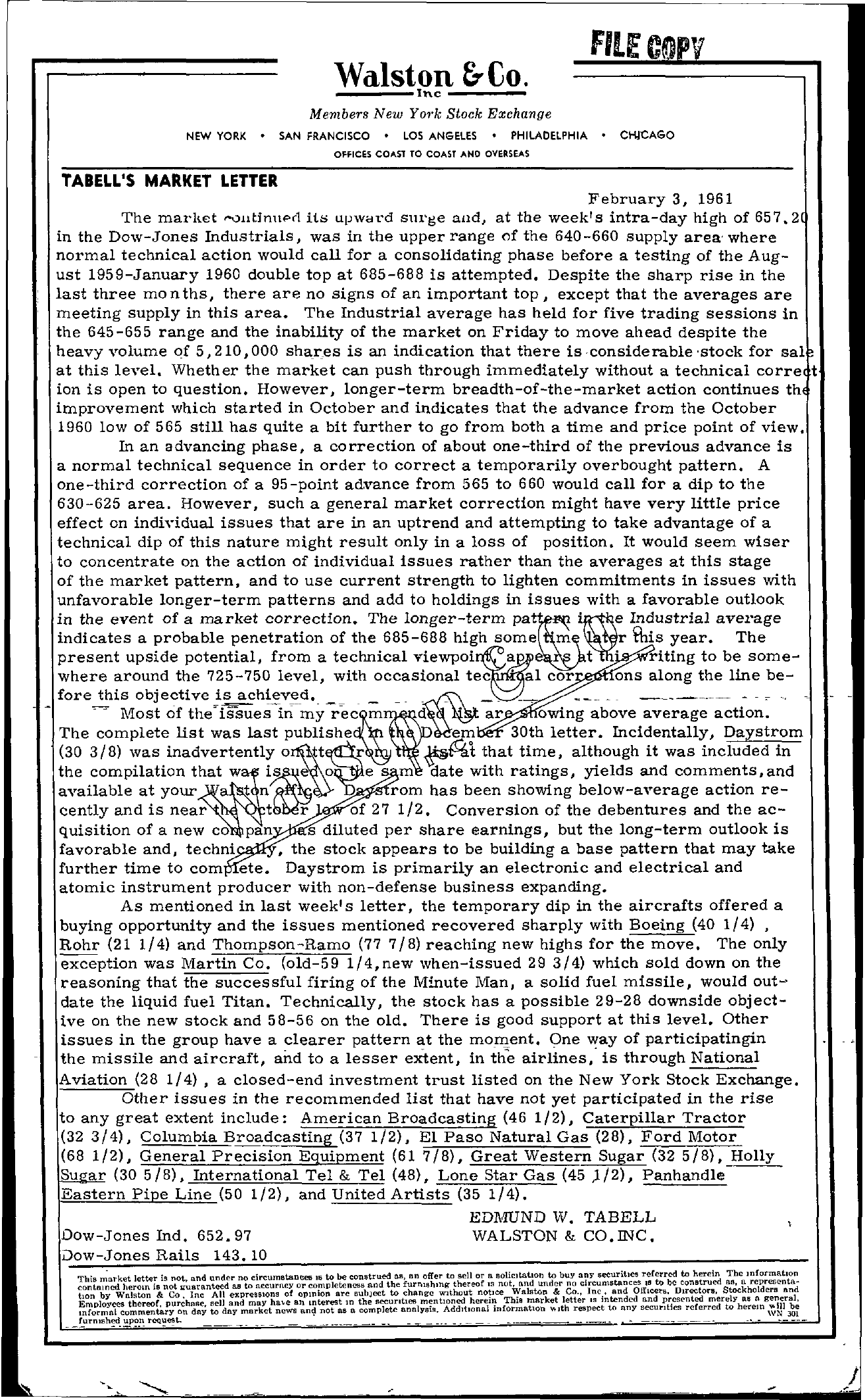 Walston &Co. Inc – – – – – FILE NEW YORK Members New Yo,'k Stock Exchange SAN FRANCISCO LOS ANGELES PHILADELPHIA CHlCAGO OffiCES COAST TO COAST AND OVERSEAS TABEll'S MARKET lETTER February 3, 1961 The market 011tinllPrl Us upwlrd surge and, at the week's intra-day high of 657.2 in the Dow-Jones Industrials, was in the upper range of the 640 -660 supply area' where normal technical action would call for a consolidating phase before a testing of the August 1959-January 1960 double top at 685-688 is attempted. Despite the sharp rise in the last three months, there are no signs of an important top, except that the averages are meeting supply in this area. The Industrial average has held for five trading sessions in the 645-655 range and the inability of the market on Friday to move ahead despite the heavy volume of 5,210,000 sharoes is an indication that there is ,considerable 'stock for sal at this level. Whether the market can push through immediately without a technical corre t ion is open to question. However, longer-term breadth-of-the-market action continues th improvement which started in October and indicates that the advance from the October 1960 low of 565 still has quite a bit further to go from both a time and price point of view. In an advancing phase, a correction of about one-third of the previous advance is a normal technical sequence in order to correct a temporarily overbought pattern. A one-third correction of a 95-point advance from 565 to 660 would call for a dip to the 630-625 area. However, such a general market correction might have very little price effect on individual issues that are in an uptrend and attempting to take advantage of a technical dip of this nature might result only in a loss of position. It would seem wiser to concentrate on the action of individual issues rather than the averages at this stage of the market pattern, and to use current strength to lighten commitments in issues with unfavorable longer-term patterns and add to holdings in issues with a favorable outlook in the event of a market correction. The longer-term Industrial average indicates a probable penetration of the 685-688 high some 'm r this year. The present upside potential, from a technical t ' riting to be some- where level, with occasional tec . al cor ons along the line be- '2-' -, .– -, –fore thlS obJechve lS achleved. 'i-ei'- Most of – -' . ar c -, — owing above average action. The complete list was last publishe em 30th letter. Incidentally, Daystrom (30 3/8) was inadvertently that time, although it was included in the compilation w 0 e s m date with ratings, yields and comments,and available at your a t n rom has been showing below-average action re- cently and is near tr of 27 1/2. Conversion of the debentures and the ac- quisition of a new co pan s diluted per share earnings, but the long-term outlook is favorable and, techni , the stock appears to be building a base pattern that may take further time to com ete. Daystrom is primarily an electronic and electrical and atomic instrument producer with non-defense business expanding. As mentioned in last week's letter, the temporary dip in the aircrafts offered a buying opportunity and the issues mentioned recovered sharply with Boeing (40 1/4) , Rohr (21 1/4) and Thompson-Ramo (77 7/8) reaching new highs for the move. The only exception was Martin Co. (old-59 1/4,new when-issued 29 3/4) which sold down on the reasoning that the successful firing of the Minute Man, a solid fuel missile, would out- date the liquid fuel Titan. Technically, the stock has a possible 29-28 downside object- ive on the new stock and 58-56 on the old. There is good support at this level. Other issues in the group have a clearer pattern at the mOIIl,ent. One way of participatingin the missile and aircraft, and to a lesser eXtent, in the airlines,' is through National Aviation (28 1/4) , a closed-end investment trust listed on the New York Stock Exchange. Other issues in the recommended list that have not yet participated in the rise to any great extent include American Broadcasting (46 1/2), Caterpillar Tractor (32 3/4), Columbia Broadcasting (37 1/2), El Paso Natural Gas (28), Ford Motor (68 1/2), General Precision Equipment (61 7/8), Great Western Sugar (32 5/8), Holly Su ar (30 5/8), International Tel & Tel (48), Lone Star Gas (45 ,1/2), Panhandle Eastern Pi e Line (501/2), and United Artists (351/4). Dow-Jones Ind. 652.97 uow-Jones Rails 143.10 EDMUND W. TABELL WALSTON & CO.INC. This nlIorket letter Is not, and under no circumstances IS to be construed as, an offer to sell or a soliCItation to buy any secUritIes referred to herein The information contlllned herem is not guarant!ed 8.11 to Ilccurllcy or completeness and the furnIShmg thereof IS not, and under no circumstances IS to be construed SS, t by Walston & Co Inc thC!reof purchase All expreSSIOns sell and may of opmion are subJect to change WIthout notice Walston & an mterest In the secUrIties mentioned herein This market Co., Inc, and Officers. Directors, toe letter IS intended and presented merely as 0 II- era ge1 fntnbl , Joimformnl on dny to day nmrkd news not as n complete annlysis. AddItional informatIon '\I,lth respect to any secut'lties referred to herein ''-