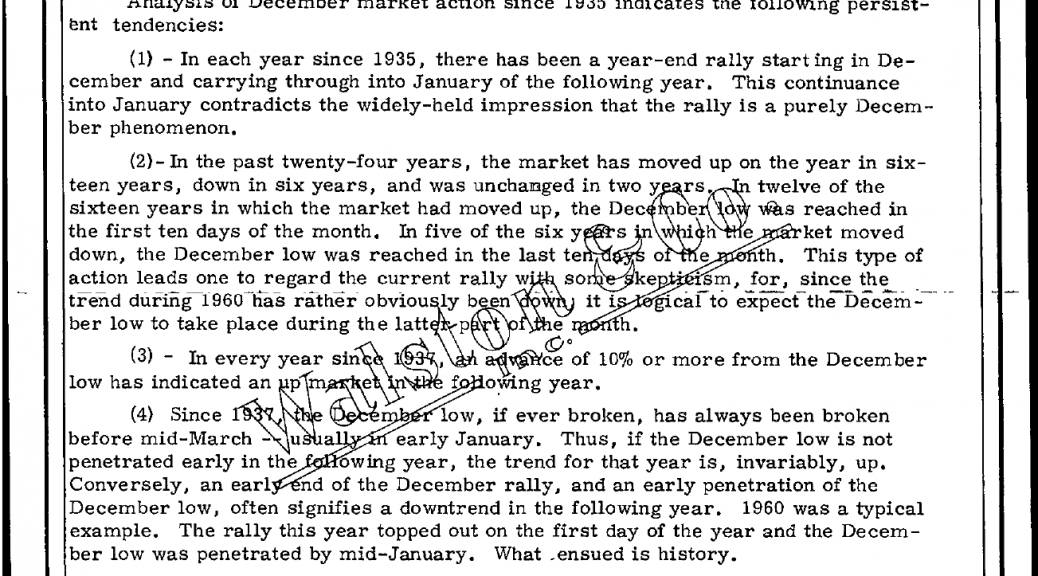 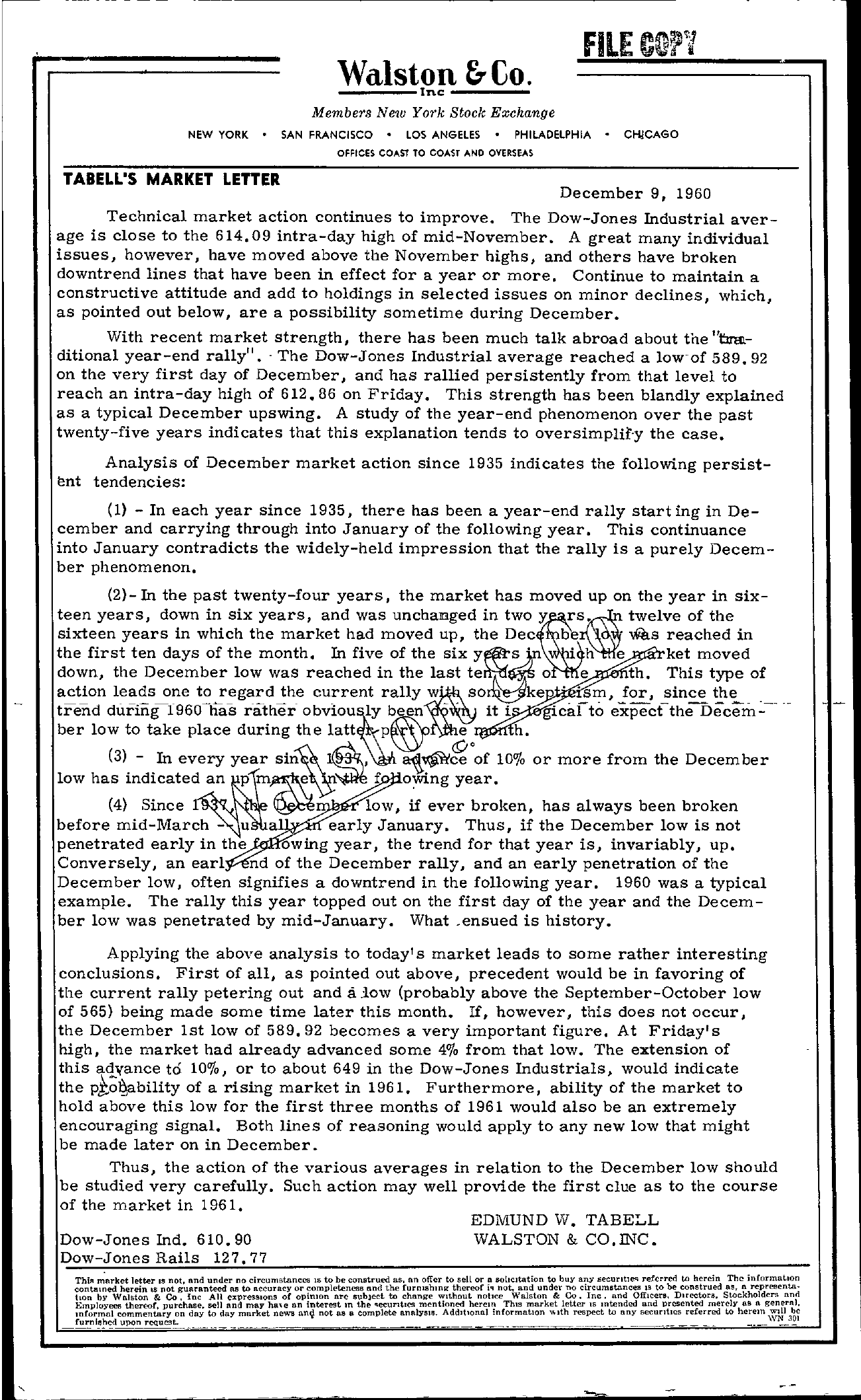 —————————— Walston &CO. Inc Members New Ym'k Stock Exchange NEW YORK SAN FRANCISCO LOS ANGELES PHILADELPHIA CHICAGO OFFICES COAST TO COAST AND OVERSEAS TABELL'S MARKET LEnER December 9, 1960 Technical market action continues to improve. The Dow-Jones Industrial average is close to the 614.09 intra-day high of mid-November. A great many individual issues, however, have moved above the November highs, and others have broken downtrend lines that have been in effect for a year or more. Continue to maintain a constructive attitude and add to holdings in selected issues on minor declines, which, as pointed out below, are a possibility sometime during December. With recent market strength, there has been much talk abroad about the tJrmditional year-end rally. – The Dow-Jones Industrial average reached a lowof 589. 92 on the very first day of December, and has rallied persistently from that level to reach an intra-day high of 612. 86 on Friday. This strength has been blandly explained as a typical December upswing. A study of the year-end phenomenon over the past twenty-five years indicates that this explanation tends to oversimplil'-y the case. Analysis of December market action since 1935 indicates the following persistent tendencies (1) – In each year since 1935, there has been a year-end rally starting in December and carrying through into January of the following year. This continuance into January contradicts the widely-held impression that the rally is a purely December phenomenon. (2) – In the past twenty-four years, the market has moved up on the year in six- teen years, down in six years, and was unchanged in twelve of the sixteen years in which the market had moved up, the Dec b was reached in the first ten days of the month. In five of the six jp i h e ket moved down, the December low was reached in the last 0 ;2 tho This type of action leads one to regard the current ' 'sm, for, since the trend dufingT960-has rather been – – it i gicalto expecnheDecem– ber low to take place during the latt p e h. (3) – In every year 100/0 or more from the December low has p f owing year. (4) Since 1 low, if ever broken, has always been broken before mid-March – u al early January. Thus, if the December low is not penetrated early in the owing year, the trend for that year is, invariably, up. Conversely, an earl nd of the December rally, and an early penetration of the December low, often signifies a downtrend in the following year. 1960 was a typical example. The rally this year topped out on the first day of the year and the Decem- ber low was penetrated by mid-January. What .ensued is history. Applying the above analysis to todayI s market leads to some rather interesting conclusions. First of all, as pointed out above, precedent would be in favoring of the current rally petering out and a .low (probably above the September-October low of 565) being made some time later this month. If, however, this does not occur, the December 1st low of 589.92 becomes a very important figure. At Friday's high, the market had already advanced some 40/0 from that low. The extension of this advance to 100/0, or to about 649 in the Dow-Jones Industrials, would indicate the of a rising market in 1961. Furthermore, ability of the market to hold above this low for the first three months of 1961 would also be an extremely encouraging signal. Both lines of reasoning would apply to any new low that might be made later on in December. Thus, the action of the various averages in relation to the December low should be studied very carefully. Such action may well provide the first clue as to the course of the market in 1961. EDMUND W. TABE!..L Dow-Jones Ind. 610.90 WALSTON & CO.INC. Dow Jones Rails 127.77 ThiA m'nrkct letter IS not and under no circumstances IS to be construed as, an offer to sell or a SollCltation to buy any securltlCi referred to herein The information conhuned herein IS not g;arantecd as to accuracy or completeness and the furnIshing thereof not, and under no circumstnnces IS to be construed as, a repre!!enta tiOn by Walston & Co Inc All expresSIOns of opinion are subject to change Without notIce Walston & Co, Inc, and Officers, Directors, Stockholders and Employees thereof sell and may ha'\c an interest In the mentioned herein ThIs market letter IS mtended and presented merely us n genernJ, lDformnl on day to dny mnrket news uny not us u complete analYSIS AddlhonnJ informatiOn '\\Ith respect to nny securities referred to herem upon rC(1ucst.