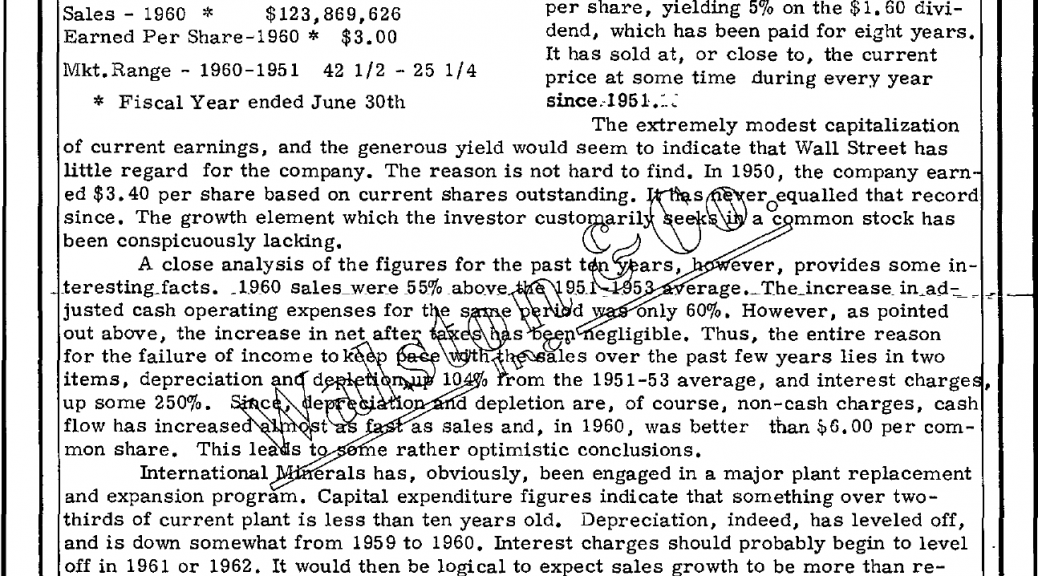 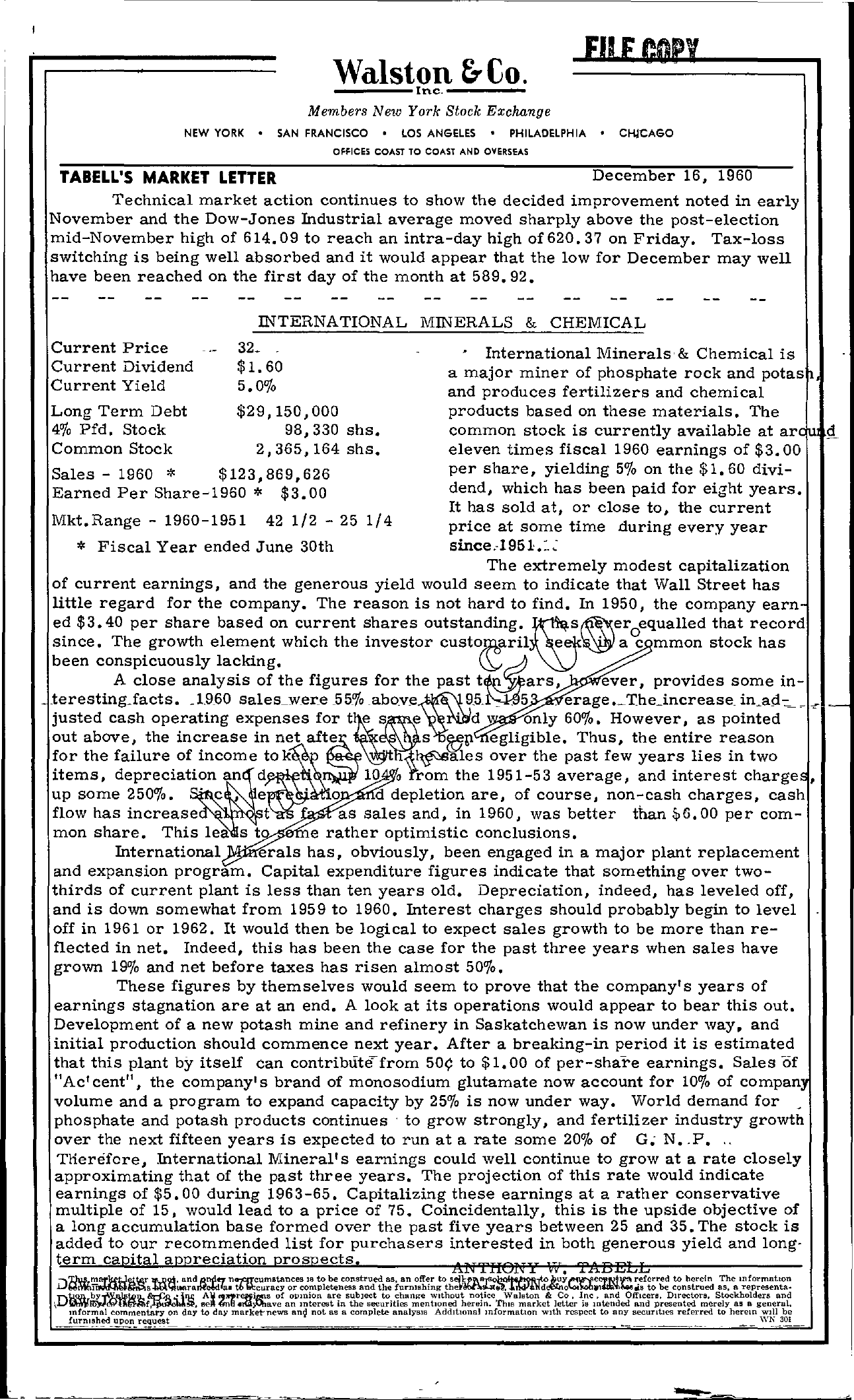 Walston &Co..;….Inc. Members New York Stock Exchange NEW YORK SAN FRANCISCO LOS ANGELES PHILADELPHIA CIICAGO OFFICES COAST TO COAST AND OVERSEAS TABELL'S MARKET LETTER December 16, 1960 Technical market action continues to show the decided improvement noted in early November and the Dow-Jones Industrial average moved sharply above the post-election mid-November high of 614.09 to reach an intra-day high of 620.37 on Friday. Tax-loss switching is being well absorbed and it would appear that the low for December may well have been reached on the first day of the month at 589.92. rnTERNATIONAL MINERALS & CHEMICAL Current Price Current Dividend Current Yield 1. 60 5.0 International Minerals' & Chemical is a major miner of phosphate rock and potas and produces fertilizers and chemical Long Term Debt 29, 150,000 products based on these materials. The 4 Pfd. Stock 98,330 shs. common stock is currently available at ar Common Stock 2,365,164 shs. Sales – 1960 123,869,626 Earned Per Share-1960 3.00 Mkt.Range – 1960-1951 42 1/2 – 25 1/4 Fiscal Year ended June 30th eleven times fiscal 1960 earnings of 3.00 per share, yielding 5 on the 1.60 dividend, which has been paid for eight years. It has sold at, or close to, the current price at some time .during every year since.-195l.. The extremely modest capitalization of current earnings, and the generous yield would seem to indicate that Wall Street has little regard for the company. The reason is not hard to find. In 1950, the company earn ed 3.40 per share based on current shares outstanding. equalled that record since. The growth element which the investor custo)1t,aril e a mmon stock has been conspicuously lacking. A close analysis of the figures for the past tars, ever, provides some in- terestingfacts. .1.9.60 saleswer.e . .5 . The.increase -.. justed cash operating expenses for . d only 60. However, as pointed out above, the increase in net for the failure of income to K items, an up some 250. . c, e I s egligible. Thus, the entire reason . over the past few years lies in two 10 0 the 1951-53 average, and interest charge, d depletion are, of course, non-cash charges, cash flow has increase t as sales and, in 1960, was better than 6.00 pe r com- mon share. This lea s t e rather optimistic conclusions. International erals has, obviously, been engaged in a major plant replacement and expansion program. Capital expenditure figures indicate that something over two- thirds of current plant is less than ten years old. Depreciation, indeed, has leveled off, and is down somewhat from 1959 to 1960. Interest charges should probably begin to level off in 1961 or 1962. It would then be logical to expect sales growth to be more than re- flected in net. Indeed, this has been the case for the past three years when sales have grown 19 and net before taxes has risen almost 50. These figures by themselves would seem to prove that the company's years of earnings stagnation are at an end. A look at its operations would appear to bear this out. Development of a new potash mine and refinery in Saskatchewan is now under way. and initial production should commence next year. After a breaking-in period it is estimated that this plant by itself can contributefrom 50 to 1.00 of per-share earnings. Sales of Ac'cent, the company's brand of monosodium glutamate now account for 10 of compan volume and a program to expand capaCity by 25 is now under way. World demand for phosphate and potash products continues' to grow strongly, and fertilizer industry growth over the next fifteen years is expected to run at a rate some 20/0 of N . P … THerefore, International Mineral's earnings could well continue to grow at a rate closely approximating that of the past three years. The projection of this rate would indicate earnings of 5.00 during 1963-65. Capitalizing these earnings at a rather conservative multiple of 15, would lead to a price of 75. Coincidentally, this is the upside objective of a long accumulation base formed over the past five years between 25 and 35. The stock is added to our recommended list for purchasers interested in both generous yield and long- term capital appreciation prospects. -'\TJu.s..mRl'ls.ctJe.tt.c.r 1f,..Qcn. and nr,qrcumstances J8 to be construed as, an offer to AN''f'IION'Y W. 'f'AEELL referred to herein The mformatIon tb h\curacy or completeness and the furnlshing ….J\dI''Ndce.rno\ot)oo(I1Iab.'il&eeeis to be construed as, a rePresenta &rf.4t. iI).l; Aij of opmion are subJect to change Without notice Walston & Co, Jnc, and Officers, Directors, Stockholders and , acA6nH..-rG'-'bave an mterest in the securities mentioned herein. ThiS market letter is tntended and presented merely as a general, mformal commentary on day to day market-news anojl not as a complete analYSIS AdditIonal tnformatton WIth respect to any securlttes referred to heretn wIll be .. ..