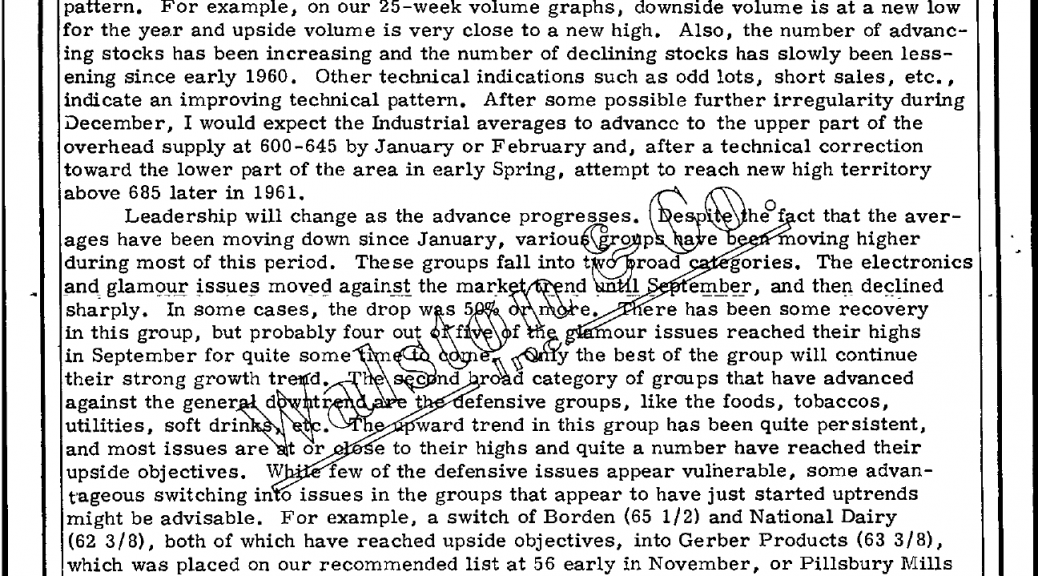 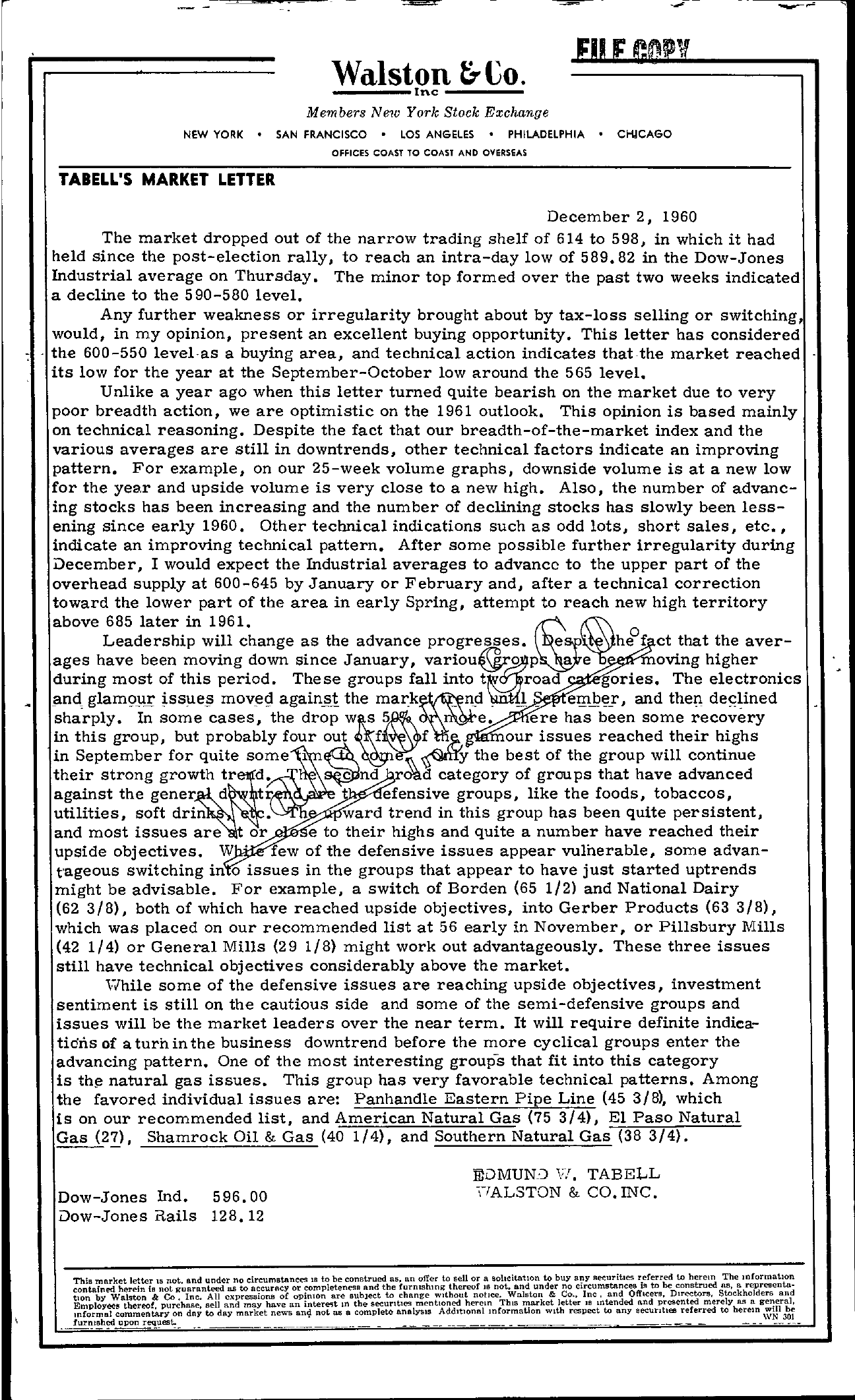 Walston &CO. Inc – – – – – Members New York Stock Exchange NEW YORK SAN FRANCISCO LOS ANGELES PHILADELPHIA CHJCAGO OFFICES COAST TO COAST AND OVERSEAS TABELL'S MARKET LETTER December 2, 1960 The market dropped out of the narrow trading shelf of 614 to 598, in which it had held since the post-election rally, to reach an intra-day low of 589.82 in the Dow-Jones Industrial average on Thursday. The minor top formed over the past two weeks indicated a decline to the 590-580 level. Any further weakness or irregularity brought about by tax-loss selling or switching, would, in my opinion, present an excellent buying opportunity. This letter has considered the 600-550 levelas a buying area, and technical action indicates that the market reached its low for the year at the September-October low around the 565 level. Unlike a year ago when this letter turned quite bearish on the market due to very poor breadth action, we are optimistic on the 1961 outlook. This opinion is based mainly on technical reasoning. Despite the fact that our breadth-of-the-market index and the various averages are still in downtrends, other technical factors indicate an improving pattern. For example, on our 25-week volume graphs, downside volume is at a new low for the yea.r and upside volume is very close to a new high. Also, the number of advancing stocks has been increasing and the number of declining stocks has slowly been lessening since early 1960. Other technical indications such as odd lots, short sales, etc., indicate an improving technical pattern. After some possible further irregularity during iJecember, I would expect the Industrial averages to advance to the upper part of the overhead supply at 600-645 by January or February and, after a technical correction toward the lower part of the area in early Spring, attempt to reach new high territory above 685 later in 1961. Leadership will change as the advance progresses. e . heOf ct that the aver- ages have been moving down since January, a e oving higher during most of this period. These groups fall into t road gories. The electronics glam().1ll' moveg the 1 and then. declined sharply. In some cases, the drop e. ere has been some recovery in this group, but probably four out f ,f our issues reached their highs in September for quite the best of the group will continue their strong growth tr dad category of groups that have advanced against the gener d tr t efensive groups, like the foods, tobaccos, utilities, soft drin ward trend in this group has been quite persistent, and most issues are t or e to their highs and quite a number have reached their upside objectives. W' few of the defensive issues appear vulnerable, some advan- tageous switching in 0 issues in the groups that appear to have just started uptrends might be advisable. For example, a switch of Borden (65 1/2) and National Dairy (62 3/8), both of which have reached upside objectives, into Gerber Products (63 3/8), which was placed on our recommended list at 56 early in November, or Pillsbury Mills (42 1/4) or General Mills (29 1/8) might work out advantageously. These three issues still have technical objectives considerably above the market. V/hile some of the defensive issues are reaching upside objectives, investment sentiment is still on the cautious side and some of the semi-defensive groups and issues will be the market leaders over the near term. It will require definite indiea- tidris of a turn in the business downtrend before the more cyclical groups enter the advancing pattern. One of the most interesting group-s that fit into this category is the natural gas issues. This group has very favorable technical patterns. Among the favored individual issues are Panhandle Eastern Pipe Line (45 3/8), which is on our recommended list, and American Natural Gas (75 3/4), EI Paso Natural Gas (20, Shamrock Oil & Gas (40 1/4), and Southern Natural Gas (38 3/4). Dow-Jones Ind. 596.00 iJow-Jones Rails 128.12 IDOMUN Yf. TABELL ,-rALSTON & CO. INC. This market letter 18 not. Bnd under no circumstances 18 to be construed as, an olter to sell or 8. soheitatlOn to buy 8.!1Y securities r.eferred to herem The mformatlOn contained herein fa not guaranteed IU! to accurney or completeness and the furmshlng thereof 18 not. and under no Circumstances IS to be construed ItS, a representa tlOn by Walston & Co. Inc. All expressions of opinion are subJect to change Without notice. Walston & Co., Inc, und Officers, Dlrcctors, Stockholders and EmployeeI'! thereof, purchase, sell and may have an intere'!t In the seeufltle!! mentioned herem ThiS market letter IS mtended and prcscnted merely as a \VMIInformal commentary on day to day market news anc. not as a complete analYSIS AdditIOnal mformatlon With respect to any securities referred to herein . .. —–