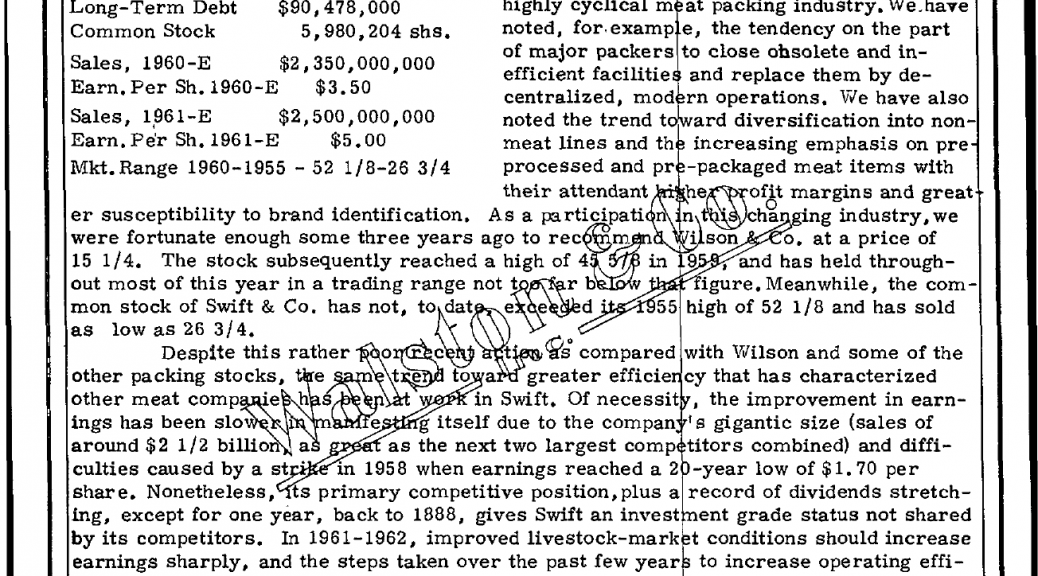 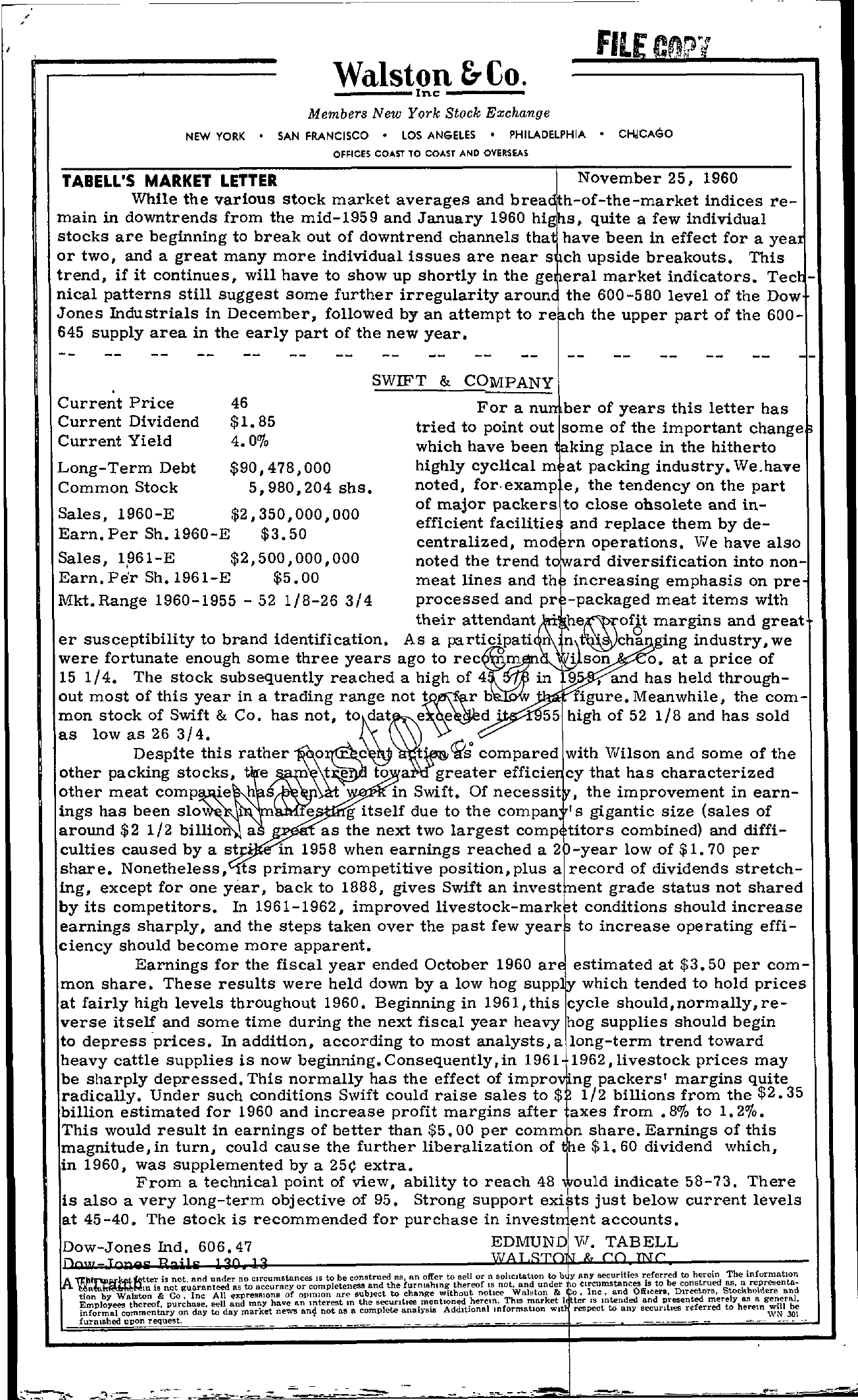 Walston &Co. flL Members New York Stock Exchange NEW YORK SAN FRANCISCO LOS ANGELES PHILADELPHIA CHICAGO OFFICES COAST TO COAST AND OVERSEAS TABEll'S MARKET lETTER November 25, 1960 While the various stock market averages and breafh-Of-the-market indices remain in downtrends from the mid-1959 and January 1960 hi s, quite a few individual stocks are beginning to break out of downtrend channels tha have been in effect for a yea or two, and a great many more individual issues are near s ch upside breakouts. This trend, if it continues, will have to show up shortly in the ge eral market indicators. Tec – nical patterns still suggest some further irregularity aroun the 600-580 level of the Dow Jones Industrials in December, followed by an attempt to re ch the upper part of the 600- 645 supply area in the early part of the new year. SWIFT & COMPANY Current Price Current Dividend Current Yield 46 1.85 4. 0 For a nu ber of years this letter has tried to pOint out some of the important change which have been aking place in the hitherto Long-Term Debt Common Stock 90,478,000 5,980,204 shs. Sales, 1960-E 2,350,000,000 Earn.PerSh.1960-E 3.50 Sales, 1,961-E 2,500,000,000 Earn. Pe'r Sh. 1961-E 5.00 highly cyclical m at packing industry. We.have noted, for,examp e, the tendency on the part of major packers to close obsolete and inefficient facHitie and replace them by decentralized, mod rn operations. We have also noted the trend to ard diversification into nonmeat lines and th increasing emphasis on pre Mkt.Range 1960-1955 – 52 1/8-263/4 processed and pr -packaged meat items with their attendant margins and great er susceptibility to brand identification. As a participati n ing industry, we were fortunate enough some three years ago to i son o. at a price of 15 1/4. The stock subsequently reached a high of 4 in 9 ,and has held through- out most of this year in a trading range not b igure. Meanwhile, the com- mon stock of Swift & Co. has not, as low as 26 3/4. e d' 55 high of 52 1/8 and has sold Despite this rather compared with Wilson and some of the other packing stocks, other meat camp ie h s to a greater efficie cy that has characterized in Swift. Of necessit the improvement in earn- ings has been slo 1 e g itself due to the compan 's gigantic size (sales of around 2 1/2 billion a as the next two largest comp titors combined) and diffi- culties caused by a st in 1958 when earnings reached a 2 -year low of 1.70 per share. Nonetheless, ts primary competitive position, plus a record of dividends stretch- ing, except for one year, back to 1888, gives Swift an invest ent grade status not shared by its competitors. In 1961-1962, improved livestock-mark t conditions should increase earnings sharply, and the steps taken over the past few year to increase operating effi- ciency should become more apparent. Earnings for the fiscal year ended October 1960 ar estimated at 3.50 per com- mon share. These results were held down by a low hog supp which tended to hold prices at fairly high levels throughout 1960. Beginning in 1961,this cycle should,normally,re- verse itself and some time during the next fiscal year heavy hog supplies should begin to depress prices. In addition, according to most analysts, a long-term trend toward heavy cattle supplies is now beginning. Consequently,in 1961 1962, livestock prices may be sharply depressed. This normally has the effect of impro ng packers' margins quite radically. Under such conditions Swift could raise sales to 1/2 billions from the 2.35 billion estimated for 1960 and increase profit margins after axes from .8 to 1.2. This would result in earnings of better than 5.00 per comm n share. Earnings of this magnitude, in turn, could cause the further liberalization of e 1.60 dividend which, in 1960, was supplemented by a 25 extra. From a technical paint of view, ability to reach 48 ould indicate 58-73. There is also a very long-term objective of 95. Strong support exi ts just below current levels at 45-40. The stock is recommended for purchase in invest ent accounts. Dow-Jones Ind. 606.47 EDMUND W. TAB ELL mhnl1ukctictter is not, and under no clreumstnnces IS to be construed as, an offer to sell or n soliCitation to b y Any securities r.et'crred to herein The information is not guaranteed as to accuracy or completeness and the furnlshmg thereof IS not, and under 0 Circumstances l.S to be construed as, a reprcsenta dti n b W Iston & Co Inc All er;preBBlOno of OPlnJon are subJect to change without notice Waloton & 0, Inc, and Olilccro, DIrectors, Stockholders an atbereof sell and may have an Interest In the oecUl'ltles mentIoned herem. ThiS market I ter IS Intended and presentr a informal cornmentiu-y on day to day market news anq. not as a complete analysis Additional InformatIOn Wit respect to any Bccul'Ibes re err to …. 301 furnished upon request. . ——–