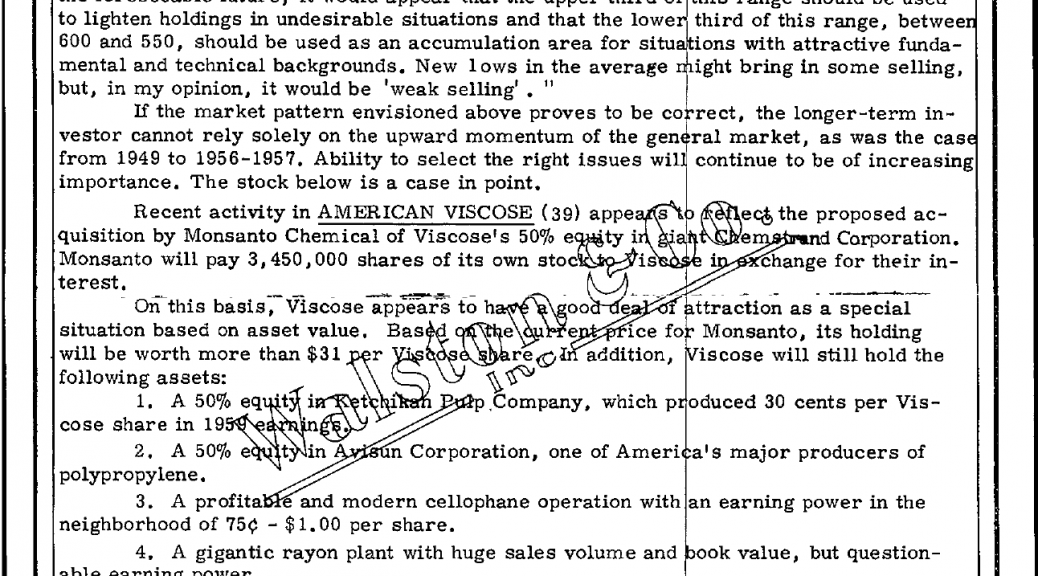 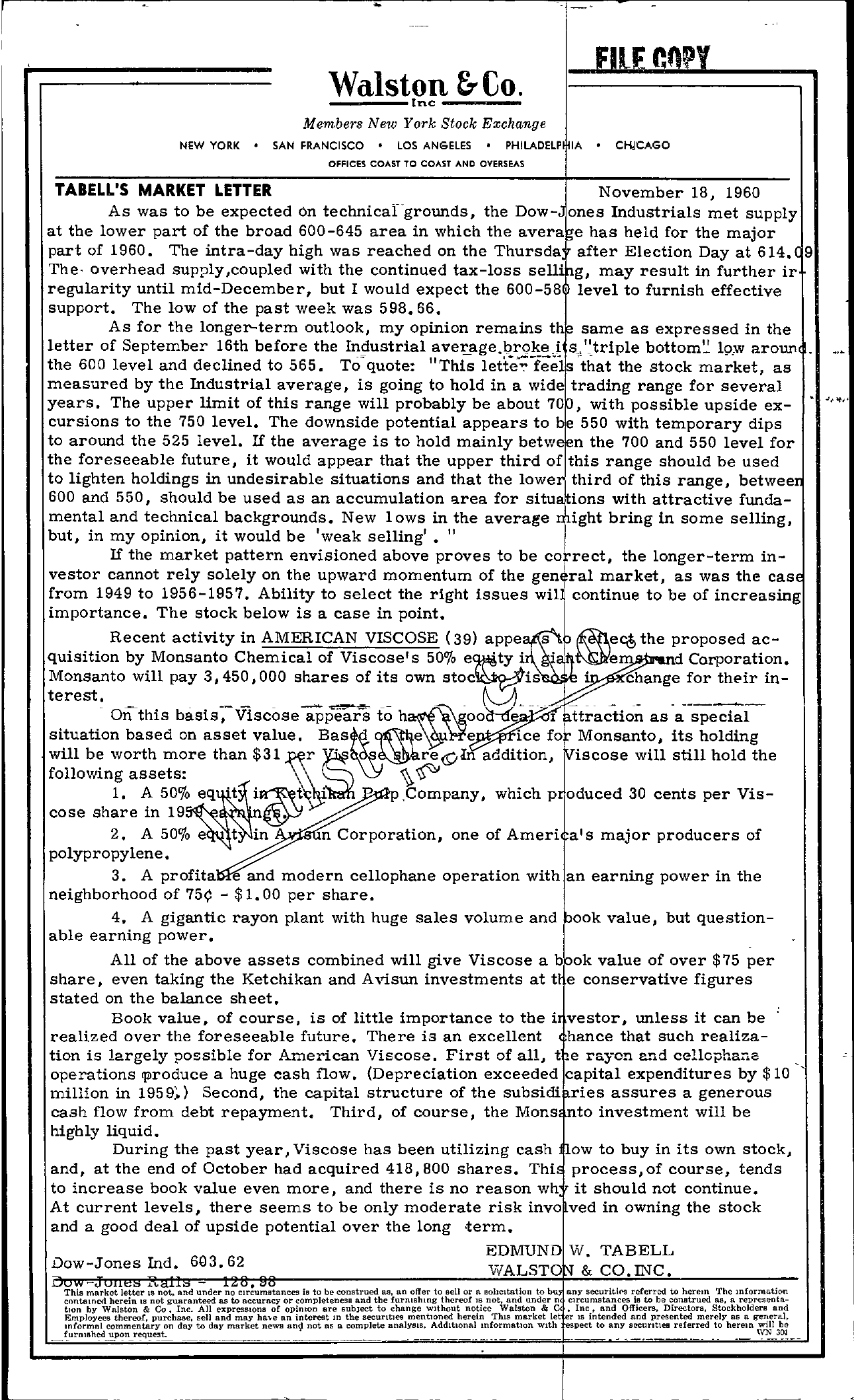 r Walston &- Co. Inc Members New York Stock Exchange NEW YORK SAN FRANCISCO LOS ANGELES PHILADELP IA CHJCAGO OFFICES COAST TO COAST AND OVERSEAS TABELL'S MARKET LETTER November 18, 1960 As was to be expected on technicaCgrounds, the Dow-Jones Industrials met supply at the lower part of the broad 600-645 area in which the average has held for the major part of 1960. The intra-day high was reached on the Thursda after Election Day at 614. C9 The- overhead supply,coupled with the continued tax-loss sellip.g, may result in further ir regularity until mid-December, but I would expect the 600-58 level to furnish effective support. The low of the past week was 598.66. As for the longer-term outlook, my opinion remains same as expressed in the letter of September 16th before the Industrial j s.. triple bottom'.' 19W aroUl'l the 600 level and declined to 565. This s'that the stock market, as measured by the Industrial average, is going to hold in a wide trading range for several years. The upper limit of this range will probably be about 700, with possible upside ex- ',. cursions to the 750 level. The downside potential appears to be 550 with temporary dips to around the 525 level. If the average is to hold mainly between the 700 and 550 level for the foreseeable future, it would appear that the upper third of this range should be used to lighten holdings in undesirable situations and that the lower third of this range, betweer 600 and 550, should be used as an accumulation area for situE ions with attractive funda- mental and technical backgrounds. New lows in the average right bring in some selling, but, in my opinion, it would be 'weak selling' If the market pattern envisioned above proves to be cot-rect, the longer-term in- vestor cannot rely solely on the upward momentum of the gen ral market, as was the caSE from 1949 to 1956-1957. Ability to select the right issues wii continue to be of increasing importance. The stock below is a case in point. Recent activity in AMERICAN VISCOSE (39) quisition by Monsanto Chemical of Viscose's 50/0 Monsanto will pay 3,450,000 shares of its own 1. i the proposed acCorporation. change for their in- will be worth more than 31 following assets 1. A 't cose share in 19 ' 2. A 50/0 e t in -r. polypropylene. addition, !viscose will still hold the 1 ,Company, which p' oduced 30 cents per Visn Corporation, one of Ameri a's major producers of 3. A profita e and modern cellophane operation with an earning power in the neighborhood of 75 – 1.00 per share. 4. A gigantic rayon plant with huge sales volume and /look value, but questionable earning power. All of the above assets combined will give Viscose a bpok value of over 75 per share, even taking the Ketchikan and Aisun investments at tl e conservative figures stated on the balance sheet. Book value, of course, is of little importance to the i vestor, unless it can be realized over the foreseeable future. There is an excellent hance that such realization is largely possible for American Viscose. First of all, t e rayon end cellophane operations rplroduce a huge cash flow. (Depreciation exceeded capital expenditures by 10 . million in 195 Second, the capital structure of the subsidhries assures a generous cash flow from debt repayment. Third, of course, the Mons mto investment will be highly liquid. During the past year. Viscose has been utilizing cash 'ow to buy in its own stock, and, at the end of October had acquired 418,800 shares. This process, of course, tends to increase book value even more, and there is no reason wh it should not continue. At current levels, there seems to be only moderate risk invo ved in owning the stock and a good deal of upside potential over the long ,term. Dow-Jones Ind. 603.62 EDMUND W. TABELL WALSTON & CO. INC. I is to be construed as, an offer to sell or 1\ soliCitation to bu any securiti('9 referred to herem The mformation cl)nuuncd herein IS not guaranteed as to accuracy or completeness and the furnlshmg thereof not, and under cIrcumstances to be as, a representa- tIOn by Walston & Co. Inc. All expressions of opintOn are subJect to change WIthout notIce Walston &, Inc. and OffIcers, Directors, Stockholders nnd Employees thereof, purchase, sell and may ha.. e an interest In the secuntH'g mentIOned herein ThiS market let er IS mtended and presented merely as a Informal commentary on day to day market ncWB anI not as a complete analYSIS. Additional tnformattOn With ;';pect to any SI!CUTItleB referred to herem wdl be \Yl! . I