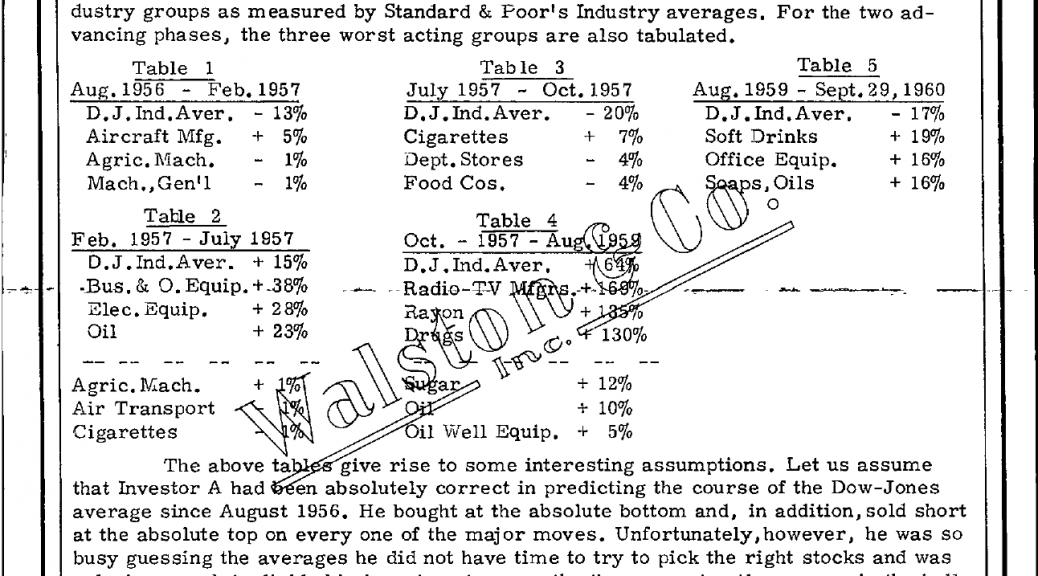 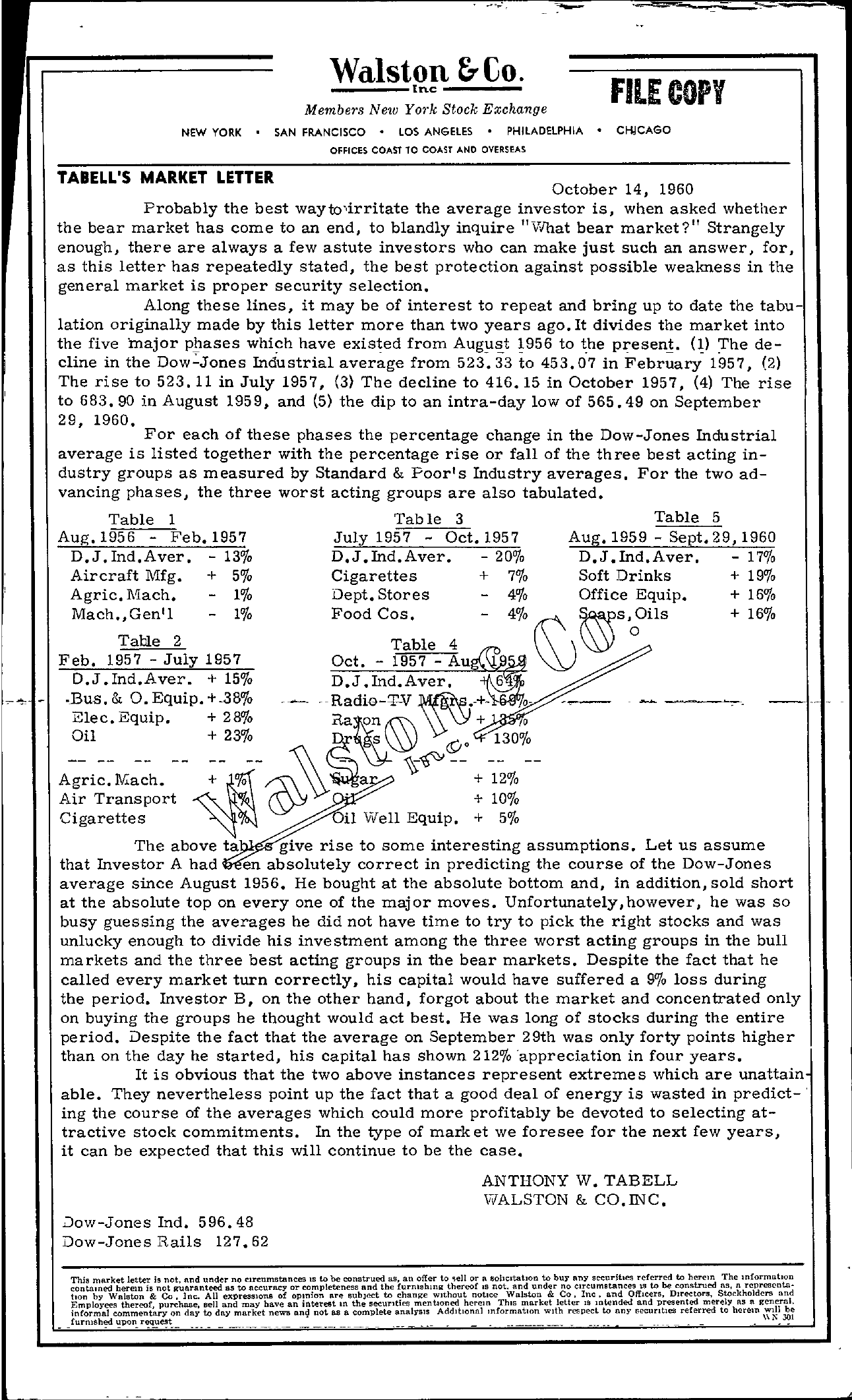 Walston &- Co. Inc – – – – Members New YOTk Stock Exchange NEW YORK SAN FRANCISCO LOS ANGELES PHILADELPHIA OFFICES COAST TO COAST AND OVERSEAS FILE COpy CHdCAGO TABEll'S MARKET lETTER October 14, 1960 Probably the best wayto',irritate the average investor is, when asked whether the bear market has come to an end, to blandly inquire What bear market Strangely enough, there are always a few astute investors who can make just such an answer, for, as this letter has repeatedly stated, the best protection against possible weakness in the general market is proper security selection. Along these lines, it may be of interest to repeat and bring up to date the tabu lation originally made by this letter more than two years ago. It divides the market into the five major Pl1ases which have existed from August 1956 to the present. (1) The de- cline in the Dow''Jones Industrial average from 33 to 453.07 in 1957, (2) The rise to 523.11 in July 1957, (3) The decline to 416.15 in October 1957, (4) The rise to 683.90 in August 1959, and (5) the dip to an intra-day low of 565.49 on September 29, 1960. For each of these phases the percentage change in the Dow-Jones Industrial average is listed together with the percentage rise or fall of the three best acting in- dustry groups as measured by Standard & Poor's Industry averages. For the two ad- vancing phases, the three worst acting groups are also tabulated. Table 1 Aug.1956 – Feb.1957 D.J.Ind.Aver. – 130/0 Aircraft Mfg. 50/0 Agric. Mach. 10/0 Mach.,Gen'l 10/0 Tab Ie 3 July 1957 – Oct. 1957 D.J.Ind.Aver. – 200/0 Cigarettes 70/0 Dept. Stores 4/0 Food Cos. – 40/0 Table 5 Aug. 1959 – Sept. 29,1960 D.J.Ind.Aver. – 170/0 Soft Drinks 19/0 Office Equip. 160/0 160/0 Table 2 Feb. 1957 – July 1957 D.J .Ind.Aver. 150/0 Table 4 Oct. – 1957 D.J Ind.Aver. Ts'4!iil .Bus. & O. Equip. E1ec.Equip. 7' n \).\Y Air Transport Cigarettes ' 100/0 Oil vVell Equip. 50/0 The above ta give rise to some interesting assumptions. Let us assume that Investor A had en absolutely correct in predicting the course of the Dow-Jones average since August 1956. He bought at the absolute bottom and, in addition, sold short at the absolute top on everyone of the major moves. Unfortunately,however, he was so busy guessing the averages he did not have time to try to pick the right stocks and was unlucky enough to divide his investment among the three worst acting groups in the bull markets and the three best acting groups in the bear markets. Despite the fact that he called every market turn correctly, his capital would have suffered a 90/0 loss during the period. Investor B, on the other hand, forgot about the market and concentrated only on buying the groups he thought would act best. He was long of stocks during the entire period. Despite the fact that the average on September 29th was only forty points higher than on the day he started, his capital has shown 2120/0 'appreciation in four years. It is obvious that the two above instances represent extremes which are unattain able. They nevertheless point up the fact that a good deal of energy is wasted in predict- ' ing the course of the averages which could more profitably be devoted to selecting attractive stock commitments. In the type of market we foresee for the next few years, it can be expected that this will continue to be the case. 00w-Jones Ind. 596.48 Dow-Jones Rails 127.62 ANTHONYW.TABELL I'ALSTON & CO.INC. This market letter is not, and under no Cllcumstances IS to be construed as, an offer to ;cU or 1\ sohcltabon to buy any securities referred to herem The Information contamed berem is not /nlnranteed as to accuracy or completeness and the furnlshmg thereof 15 not. and under no cIrcumstances 18 to be construed as, n l'!.prescnta hon by Walston & Co. Inc. All expresSions of opinion are subJect to change without notice Walston & Co, Inc, and Officers, Directors, Stockholders and Employees thereof, purchnse, sell and may have an interest In the secUrities mentioned herem ThIS market letter IS mtended and presented merely as a general. informal eommentary on day to day market news and not as a complete analysIs AdditIonal mfOrmatlOn with resPl!'Ct to any securltles referred to hereIn wI!1 be …..