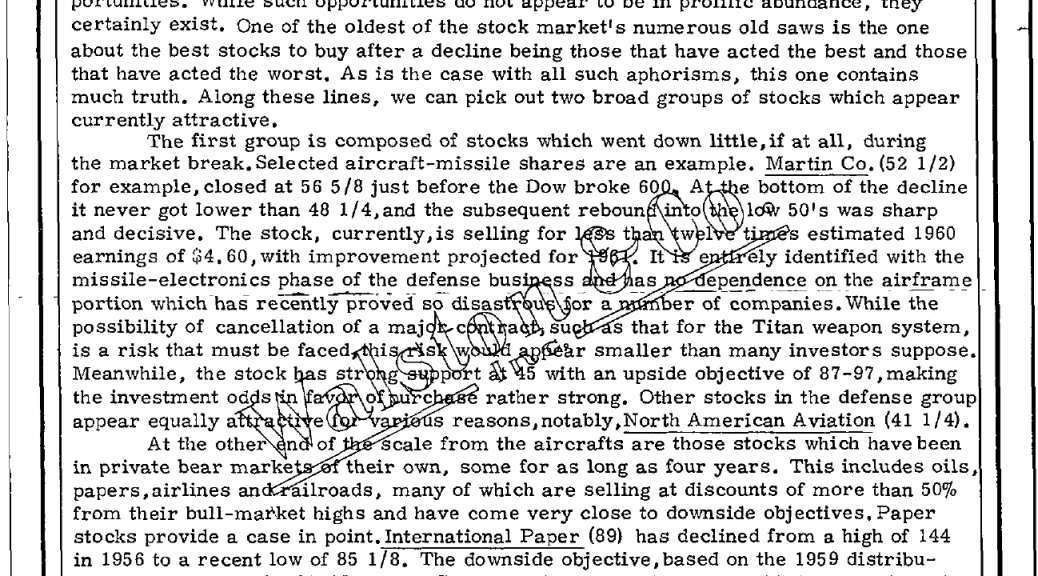 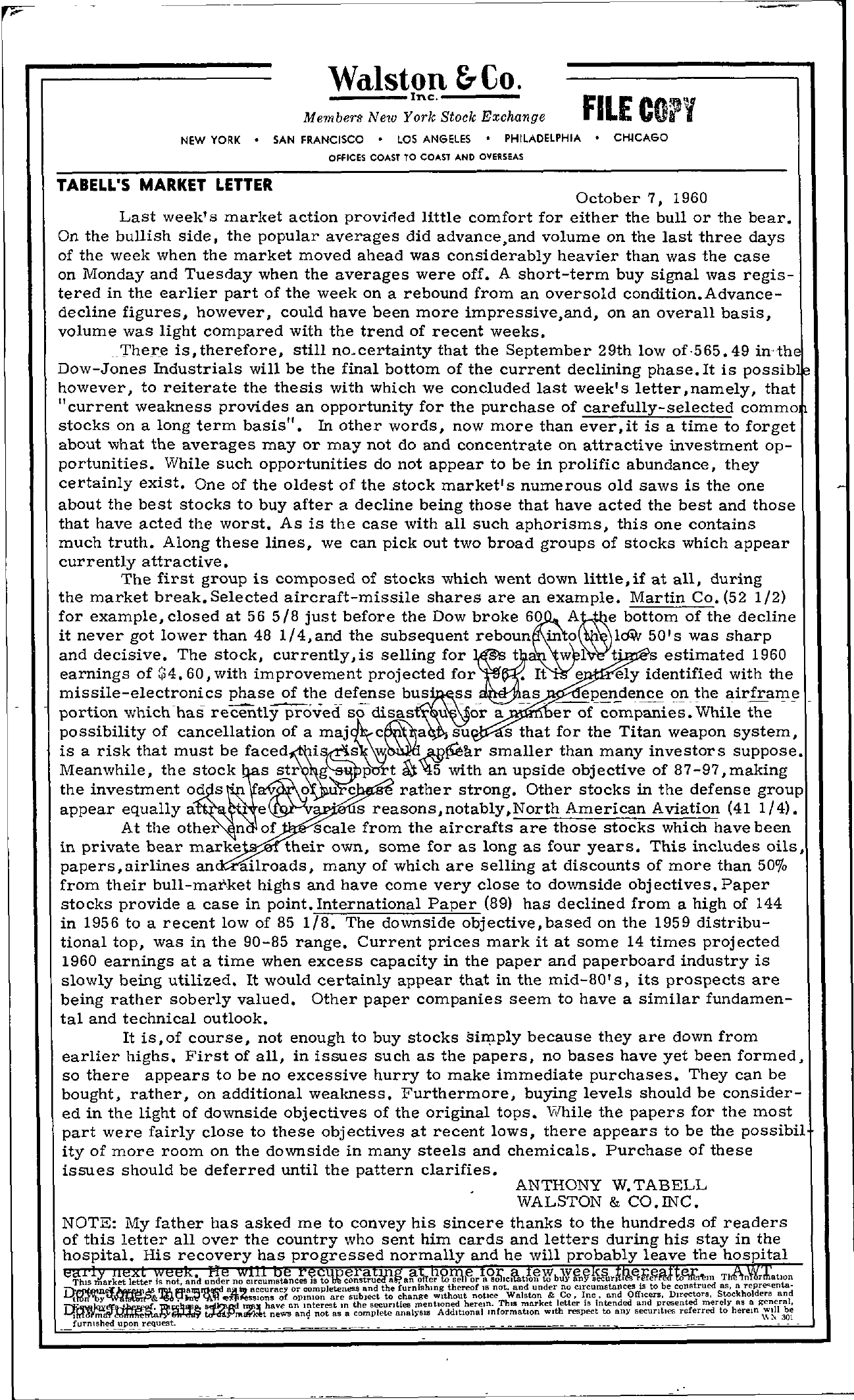 Walston &Co. Inc. Members New York Stock Exchallge FILE NEW YORK SAN FRANCISCO LOS ANGELES PHILADELPHIA CHICAGO OFFICES COAST TO COAST AND OVERSEAS TABELL'S MARKET LETTER October 7, 1960 Last week's market action provioed little comfort for either the bull or the bear. On the bullish side, the popular averages did advance,and volume on the last three days of the week when the market moved ahead was considerably heavier than was the case on Monday and Tuesday when the averages were off. A short-term buy signal was regis- tered in the earlier part of the week on a rebound from an oversold condition. Advance- decline figures, however, could have been more impressive,and, on an overall basis, volume was light compared with the trend of recent weeks. There is,therefore, still no. certainty that the September 29th low of-565.49 Dow-Jones Industrials will be the final bottom of the current declining phase. It is possib however, to reiterate the thesis with which we concluded last week's letter, namely, that current weakness provides an opportunity for the purchase of carefully-selected commo stocks on a long term basis. In other words, now more than ever, it is a time to forget about what the averages mayor may not do and concentrate on attractive investment op- portunities. While such opportunities do not appear to be in prolific abundance, they certainly exist. One of the oldest of the stock market's numerous old saws is the one about the best stocks to buy after a decline being those that have acted the best and those that have acted the worst. As is the case with all such aphorisms, this one contains much truth. Along these lines, we can pick out two broad groups of stocks which appear currently attractive. The first group is composed of stocks which went down little, if at all, during the market break. Selected aircraft-missile shares are an example. Martin Co. (52 1/2) for example, closed at 56 5/8 just before the Dow broke it never got lower than 48 l/4,and the subsequent reboun in 0 bottom of the decline IdW 50's was sharp and decisive. The stock, currently,is selling for earnings of 4.60, with improvement projected for wIt' s estimated 1960 It' e ely identified with the missile-electronics phase of the defense ss u -or a — -portion which has recentlyproved sodisas – as ependence on the airframe er ofc;mpanies. While the – – – possibility of cancellation of a su s that for the Titan weapon system, is a risk that must be Meanwhile, the stock s str g smaller than many investors suppose. p t 45 with an upside objective of 87-97, making the investment od s' c rather strong. Other stocks in the defense group appear equally a 1 . s reasons,notably,North American Aviation (41 1/4). At the other n of scale from the aircrafts are those stocks which have been in private bear marke their own, some for as long as four years. This includes oils, papers,airlines an ailroads, many of which are selling at discounts of more than 50 from their bull-market highs and have come very close to downside objectives. Paper stocks provide a case in point. International Paper (89) has declined from a high of 144 in 1956 to a recent low of 85 1/8. The downside objective, based on the 1959 distribu- tional top, was in the 90-85 range. Current prices mark it at some 14 times projected 1960 earnings at a time when excess capacity in the paper and paperboard industry is slowly being utilized. It would certainly appear that in the mid-80's, its prospects are being rather soberly valued. Other paper companies seem to have a similar fundamen- tal and technical outlook. It is, of course, not enough to buy stocks siIllply because they are down from earlier highs. First of all, in issues such as the papers, no bases have yet been formed, so there appears to be no excessive hurry to make immediate purchases. They can be bought, rather, on additional weakness. Furthermore, buying levels should be consider- ed in the light of downside objectives of the original tops. Vihile the papers for the most part were fairly close to these objectives at recent lows, there appears to be the possibil ity of more room on the downside in many steels and chemicals. Purchase of these issues should be deferred until the pattern clarifies. ANTHONY W. TAB ELL WALSTON & CO. INC. NOTE My father has asked me to convey his sincere thanks to the hundreds of readers of this letter all over the country who sent him cards and letters during his stay in the hospital. His recovery has progressed normally and he will probably leave the hospital searlThIS market letter is not and under no circumstances IS to eofsg.uJll. er I T n ration a;iIIQQi, 8 rOQ'ed accuracy or completeness and the (urnishmg thereof IS not. and under no CIrcumstances is to be construed DB, a repreenta- of OPinIOn are subject to change Without notIce Walston & Co, Inc. and OffIcers, DIrectors, Stockholders and ll9l1ll have an mterest m the secUrtties mentioned hereIn. ThIS market letter is intended and presented merely ns 11 general, news ang not as a complete analySIS Addlttonal mformatlOn With respect to any securItIes referred to herem ..