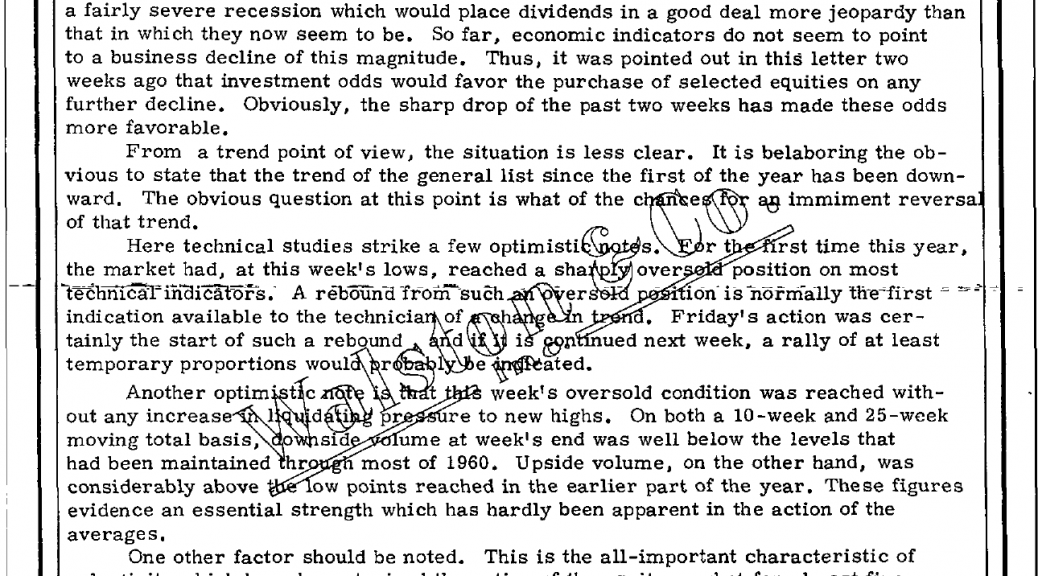 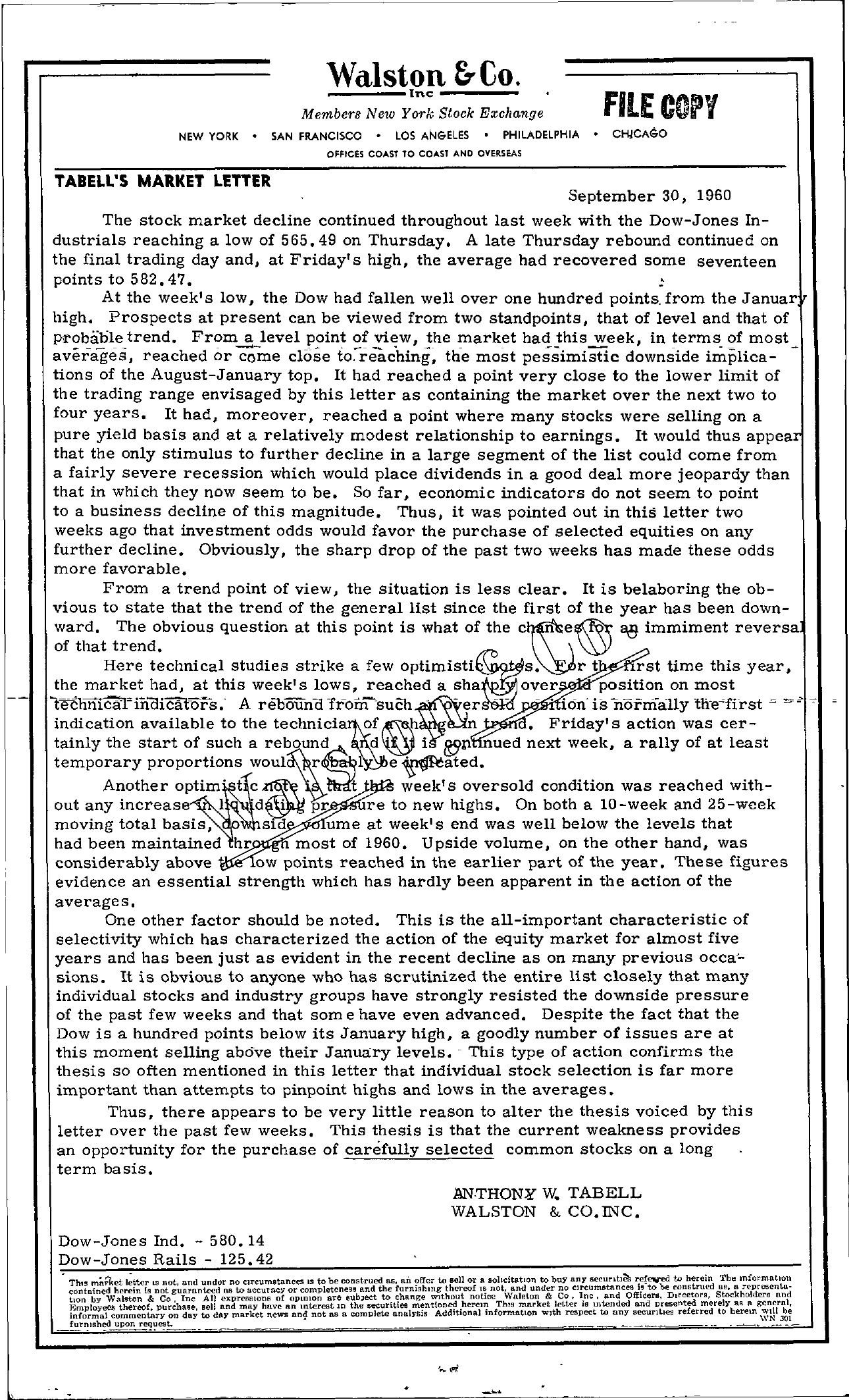 Walston &Co. Inc —– Members New York Stock Exchange NEW YORK SAN FRANCISCO LOS ANGELES PHILADELPHIA OFFICES COAST TO COAST AND OVERSEAS FILE COPY CHICAGO TABELL'S MARKET LETTER September 30, 1960 The stock market decline continued throughout last week with the Dow-Jones In- dustrials reaching a low of 565.49 on Thursday. A late Thursday rebound continued on the final trading day and, at Friday's high, the average had recovered some seventeen points to 582.47. ! At the week's low, the Dow had fallen well over one hundred points, from the Januar high. Prospects at present can be viewed from two standpoints, that of level and that of p!obaole trend. From a level point of view, the market had this week, in terms of most averages, reached or come close to-reaching, the most pessimiStic downside implica- tions of the August-January top. It had reached a point very close to the lower limit of the trading range envisaged by this letter as containing the market over the next two to four years. It had, moreover, reached a point where many stocks were selling on a pure yield basis and at a relatively modest relationship to earnings. It would thus appea that the only stimulus to further decline in a large segment of the list could come from a fairly severe recession which would place dividends in a good deal more jeopardy than that in which they now seem to be. So far, economic indicators do not seem to point to a business decline of this magnitude. Thus, it was pointed out in this letter two weeks ago that investment odds would favor the purchase of selected equities on any further decline. Obviously, the sharp drop of the past two weeks has made these odds more favorable. From a trend point of view, the situation is less clear. It is belaboring the ob- vious to state that the trend of the general list since the first of the year has been down- ward. The obvious question at this point is what of the B8 immiment reversa of that trend. Here technical studies strike a few r t rst time this year, the market had, at this week's lows, reached a position on most tecnnica-riiiaicaturs. A rebouna TrOm-SUCh;!' -. ion is normally ' 7 indication available to the tainly the start of such a Friday's action was cer- d i 8JP ued next week, a rally of at least temporary proportions e Anothe r optim' t c . t week's oversold condition was reached with- out any increase I r re to new highs. On both a 10-week and 25-week moving total basis, sld ume at week's end was well below the levels that had been maintained most of 1960. Upside volume, on the other hand, was considerably above ow pOints reached in the earlier part of the year. These figures evidence an essential strength which has hardly been apparent in the action of the averages. One other factor should be noted. This is the all-important characteristic of selectivity which has characterized the action of the equity market for almost five years and has been just as evident in the recent decline as on many previous occa- sions. It is obvious to anyone who has scrutinized the entire list closely that many individual stocks and industry groups have strongly resisted the downside pressure of the past few weeks and that som e have even advanced. Despite the fact that the Dow is a hundred points below its January high, a goodly number of issues are at this moment selling above their January levels. – This type of action confirms the thesis so often mentioned in this letter that individual stock selection is far more important than attempts to pinpoint highs and lows in the averages. Thus, there appears to be very little reason to alter the thesis voiced by this letter over the past few weeks. This thesis is that the current weakness provides an opportunity for the purchase of carefully selected common stocks on a long term basis. ANTHON W. TAB ELL WALSTON & CO. INC. Dow-Jones Ind. – 580.14 Dow-Jones Rails – 125.42 This anl;ttcr IS not, and under no cIrcumstances IS to be construed as, offer to Bell or a sohcitntlOn to buY any r.efeved to herein The mformatlOn contnined herein Is not guarantccd as to accuracy or completcness and the furnishmg thcreof 1S not, Ilnd under no circumstances IS to be construed as, R reprcscnt.a tlon by Walston & Co, Inc All expressIOns of opinIOn arc subJect to change notice Walston & Co, Ipc, and Officers, Directors, Stockholdcrs and E ployccs thereof purchase sell and may have lin mterest m the securities mentIOned herem ThiS market letter IS mtended and presented merely as a general, wMIcommenb..ry on day to day market news an4 not as a complete analysis Additional information 'Ynth respcct to any SecUl'ltles referred to herem —