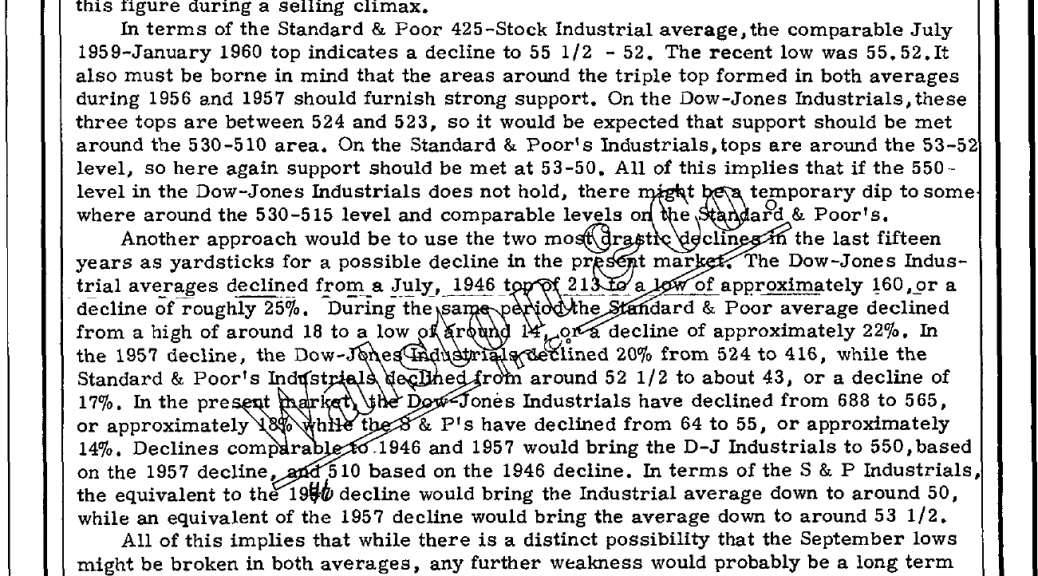 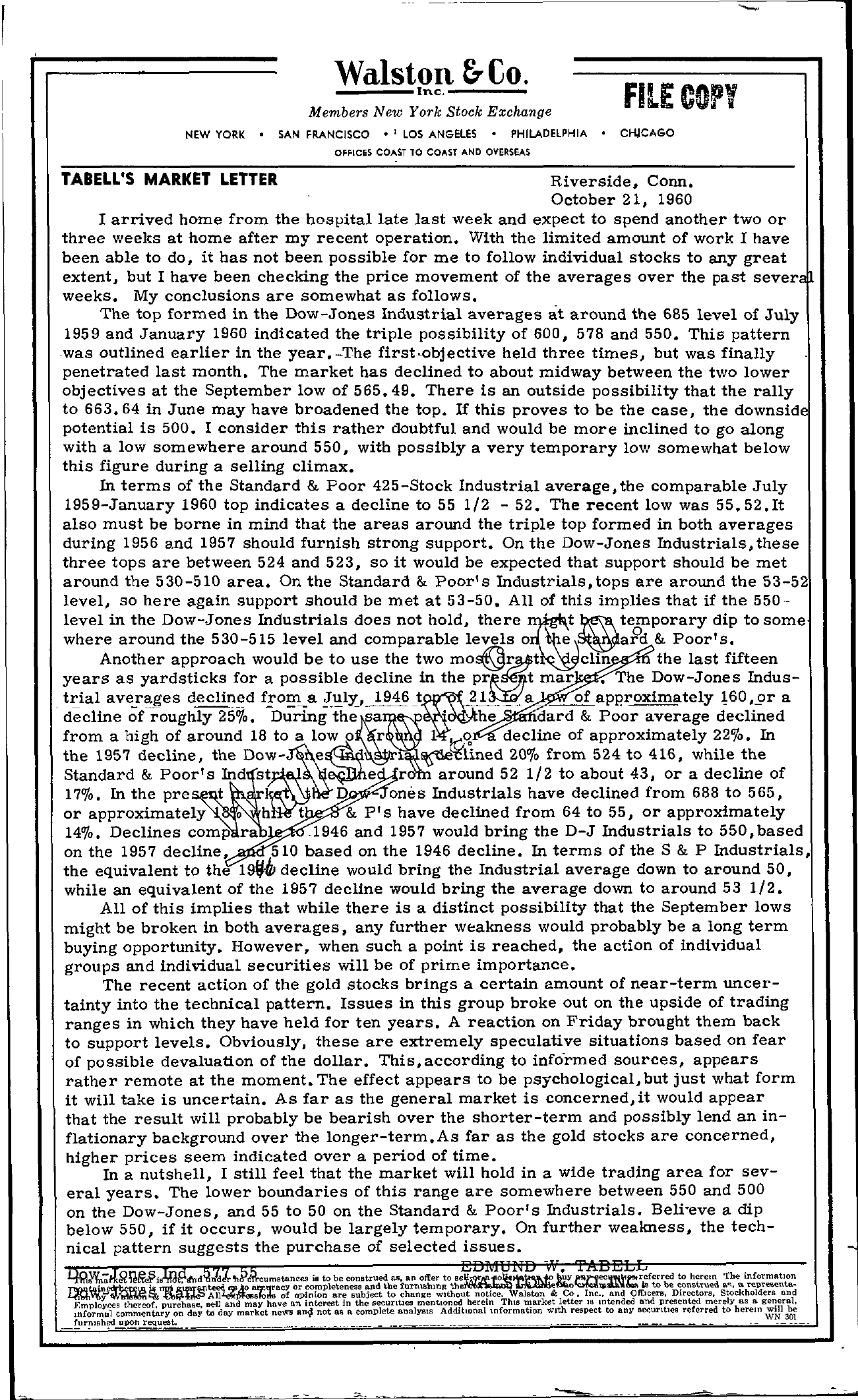 ———————,——–. Walston &Co. …;.. .;…. Inc. – – – – Members New York Stock Exchange NEW YORK SAN FRANCISCO . ' LOS ANGELES PHILADELPHIA OFFICES COAST TO COAST AND OVERSEAS FILE COPY CI-UCAGO TABEll'S MARKET lETTER Riverside, Conn. October 21, 1960 I arrived home from the hospital late last week and expect to spend another two or three weeks at home after my recent operation. With the limited amount of work I have been able to do, it has not been possible for me to follow individual stocks to any great extent, but I have been checking the price movement of the averages over the past sever weeks. My conclusions are somewhat as follows. The top formed in the Dow-Jones Industrial averages at around the 685 level of July 1959 and January 1960 indicated the triple possibility of 600, 578 and 550. This pattern was outlined earlier in the year.-The firstcobjective held three times, but was finally penetrated last month. The market has declined to about midway between the two lower objectives at the September low of 565.49. There is an outside possibility that the rally to 663.64 in June may have broadened the top. If this proves to be the case, the downsid potential is 500. I consider this rather doubtful and would be more inclined to go along with a low somewhere around 550, with possibly a very temporary low somewhat below this figure during a selling climax. In terms of the Standard & Poor 425-Stock Industrial average, the comparable July 1959-January 1960 top indicates a decline to 55 1/2 – 52. The recent low was 55.52.It also must be borne in mind that the areas around the triple top formed in both averages during 1956 a.nd 1957 should furnish strong support. On the Dow-Jones Industrials,these three tops are between 524 and 523, so it would be expected that support should be met around the 530-510 area. On the Standard & Poor's Industrials,tops are around the 53-52 level, so here again support should be met at 53-50. All of this implies that if the 550- level in the Dow-Jones Industrials does not hold, there dip to some where around the 530-515 level and comparable levels 0 e & Poor's. Another approach would be to use the two clm the last fifteen years as yardsticks for a possible decline in the mar The Dow-Jones Indus- tI'ial ave.-ages f,!'0!!l8. .rtI1)', 1946 a of approximately ,sr a decline of roughly 25/0. During he dard & Poor average declined from a high of around 18 to a low 0 r 1 /('Jq, decline of approximately 22. In the 1957 decline, the 1 20 from 524 to 416, while the Standard & Poor's Ind sm r around 52 1/2 to about 43, or a decline of 17. In the pre t D ones Industrials have declined from 688 to 565, or approximately 0 h t & P's have declined from 64 to 55, or approximately 14. Declines comp ra 1946 and 1957 would bring the D-J Industrials to 550,based on the 1957 decline, 510 based on the 1946 decline. In terms of the S & P Industrials, the equivalent to the decline would bring the Industrial average down to around 50, while an equivalent of the 1957 decline would bring the average down to around 53 1/2. All of this implies that while there is a distinct possibility that the September lows might be broken in both averages, any further weakness would probably be a long term buying opportunity. However, when such a point is reached, the action of individual groups and individual securities will be of prime importance. The recent action of the gold stocks brings a certain amount of near-term uncer- tainty into the technical pattern. Issues in this group broke out on the upside of trading ranges in which they have held for ten years. A reaction on Friday brought them back to support levels. Obviously, these are extremely speculative situations based on fear of possible devaluation of the dollar. This, according to info-rmed sources, appears rather remote at the moment. The effect appears to be psychological, but just what form it will take is uncertain. As far as the general market is concerned, it would appear that the result will probably be bearish over the shorter-term and possibly lend an in- flationary background over the longer-term. As far as the gold stocks are concerned, higher prices seem indicated over a period of time. In a nutshell, I still feel that the market will hold in a wide trading area for sev- eral years. The lower boundaries of this range are somewhere between 550 and 500 on the Dow-Jones, and 55 to 50 on the Standard & Poor's Industrials. Beli'eve a dip below 550, if it occurs, would be largely temporary. On further weakness, the tech- nical pattern suggests the purchase of selected issues. . lnd no 'tt c cumstances is to be construed as, an offer to IHiNec'I!N\!jlefrefcrred to herem 'the informatIon nW illJlAo aqqracy or completeness and the fU'I'mstllng ill to 1xl 8.\, a. of opinion are subject to change Without notice. Walston & Co, Inc., and Officers, Directors, Stockholders and Fmployces thereof purchase sell and may have an interest in the secuntles mentIoned herein TillS market letter IS mtended and presented merely as a general, on day to day market news an4 not as a complete analysts Addittonallnformation vnth respeet to any securItIes referred to herem will be . . WN 301