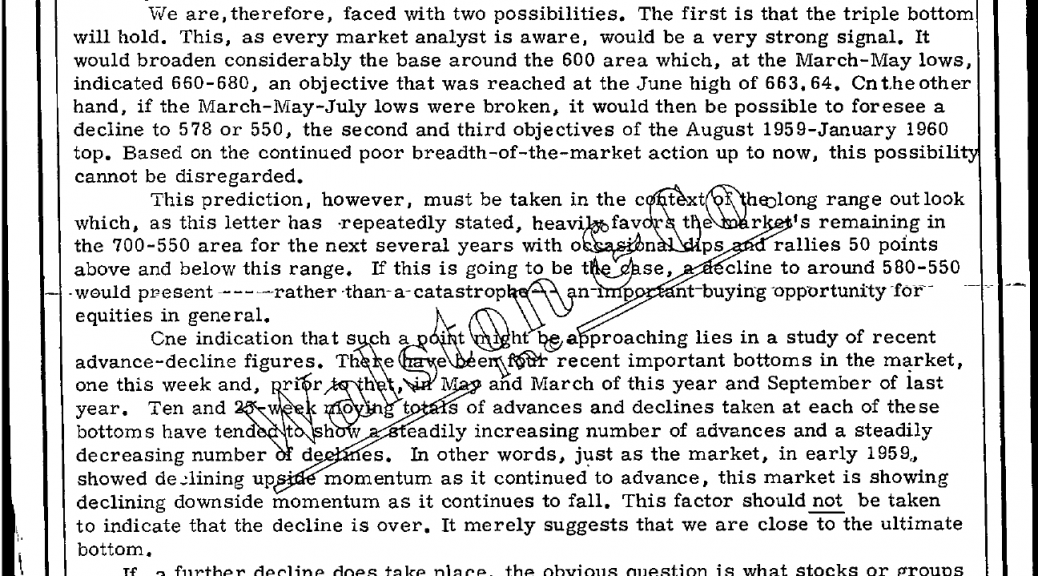 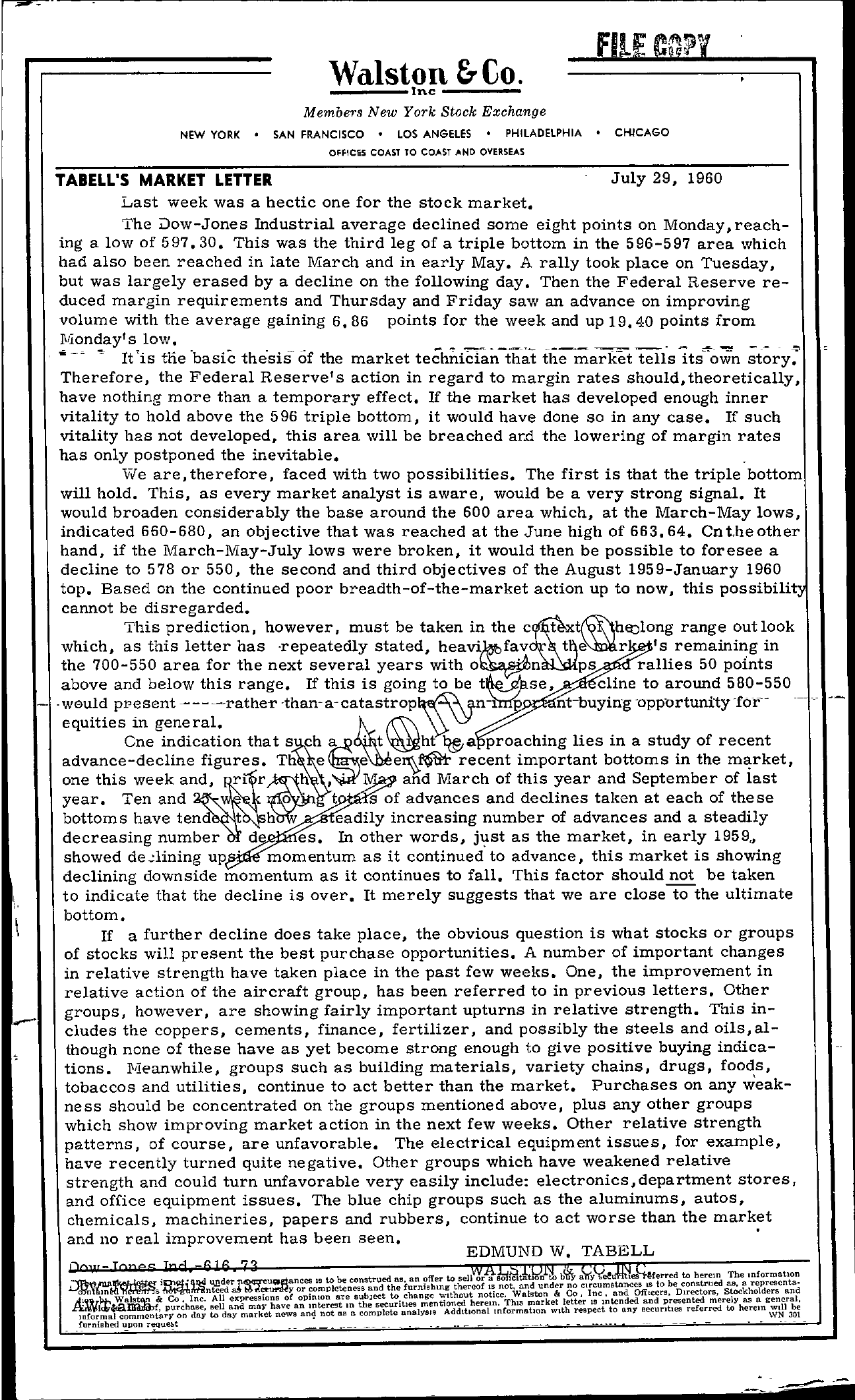 Walston &- Co. Inc Members New York Stock Exchange NEW YORK SAN FRANCISCO LOS ANGELES PHILADELPHIA CHICAGO OfFICES COAST TO COAST AND OVERSEAS TABELL'S MARKET LETTER July 29, 1960 Last week was a hectic one for the stock market. The Vow-Jones Industrial average declined some eight pOints on Monday, reaching a low of 597.30. This was the third leg of a triple bottom in the 596-597 area which had also been reached in late March and in early May. A rally took place on Tuesday, but was largely erased by a decline on the following day. Then the Federal Reserve re- duced margin requirements and Thursday and Friday saw an advance on improving volume with the average gaining 6.86 points for the week and up 19.40 pOints from l – — – — \ / l o n.d.. – a y' ! s lo t-i s w. tli e -basi-c the-sis of the market techn… iC-..i.an that th…. -e. . .m- . a r k e t tell-s its–o–'- wn – ;; Therefore, the Federal Reserve's action in regard to margin rates should, theoretically, have nothing more than a temporary effect. If the market has developed enough inner vitality to hold above the 596 triple bottom, it would have done so in any case. If such vitality has not developed, this area will be breached ard the lowering of margin rates has only postponed the inevitable. We are,therefore, faced with two possibilities. The first is that the triple bottom will hold. This, as every market analyst is aware, would be a very strong signal. It would broaden considerably the base around the 600 area which, at the March-May lows, indicated 660-680, an objective that was reached at the June high of 663.64. en t,he other hand, if the March-May-July lows were broken, it would then be possible to foresee a decline to 578 or 550, the second and third objectives of the August 1959-January 1960 top. Based on the continued poor breadth-of-the-market action up to now, this possibility cannot be disregarded. This prediction, however, must be taken in the range outlook which, as this letter has ,repeatedly stated, t 's remaining in the 700-550 area for the next several years with ps rallies 50 pOints above and below this range. If this is going to be t&Jz\tse, cline to around 580-550 — -would pl'esent —–rathe-r equities in general. fMr\\\, \\ ifn-h;ioc nt-buyin-g -opportunity fo1'- — — V. Cne indication that t'Wht proaching lies in a study of recent advance-decline figures. Th e e recent important bottoms in the one this week year. Ten and bottoms have ten rl , , and March of this year and September of last 0' t s of advances and declines taken at each of these th eadily increasing number of advances and a steadily decreasing number d e s . In other words, j'clst as the market, in early 1959 showed up momentum as it continued to advance, this market is showing declining downside momentum as it continues to fall. This factor should not be taken to indicate that the decline is over. It merely suggests that we are close to the ultimate bottom. If a further decline does take place, the obvious question is what stocks or groups of stocks will present the best purchase opportunities. A number of important changes in relative strength have taken place in the past few weeks. One, the improvement in relative action of the aircraft group, has been referred to in previous letters. Other groups, however, are showing fairly important upturns in relative strength. This in- cludes the coppers, cements, finance, fertilizer, and possibly the steels and oils,although none of these have as yet become strong enough to give positive buying indications. \IIeanwhile, groups such as building materials, variety chains, drugs, foods, tobaccos and utilities, continue to act better than the market. Purchases on any weakness should be concentrated on the groups mentioned above, plus any other groups which show improving market action in the next few weeks. Other relative strength patterns, of course, are unfavorable. The electrical equipment issues, for example, have recently turned quite negative. Other groups which have weakened relative strength and could turn unfavorable very easily include electronics,department stores, and office equipment issues. The blue chip groups such as the aluminums, autos, chemicals, machineries, papers and rubbers, continue to act worse than the market and no real improvement has been seen. e T. -' ,,,,, '7Q EDMUND W. TABELL n In mformal 0111)41 der cuweiances IS to be construed as. an offer to sell or a to herem The mformatIon S I All . or completeness and the f' 6 b cct to furnishIng thereof IS not. and under change Without notice Walston & no circumstances IS to be constrl1ed Co, Inc. and OffIcers, DIrectors, ss.teo.e 0 en; an Bell securities mentioned herem. ThiS market letter IS Intended and presenLf has a genfi!; WNon to day market news ancj not as a complete analYSIS AdditIOnal mformatlon With respect to any BeCUrItIes re err to erem 301 .. .. … . ……. ' .. … . …… . ….