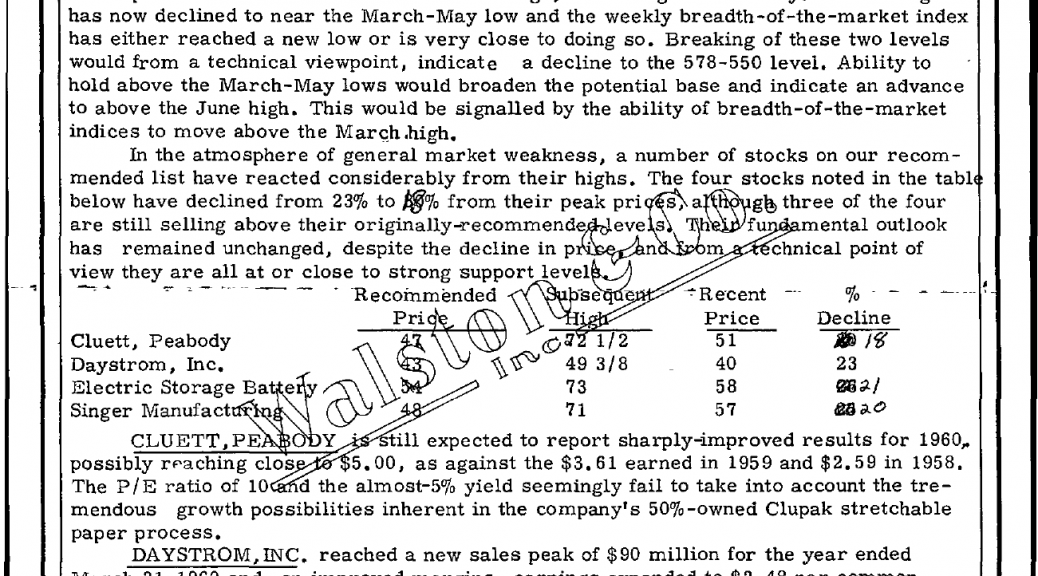 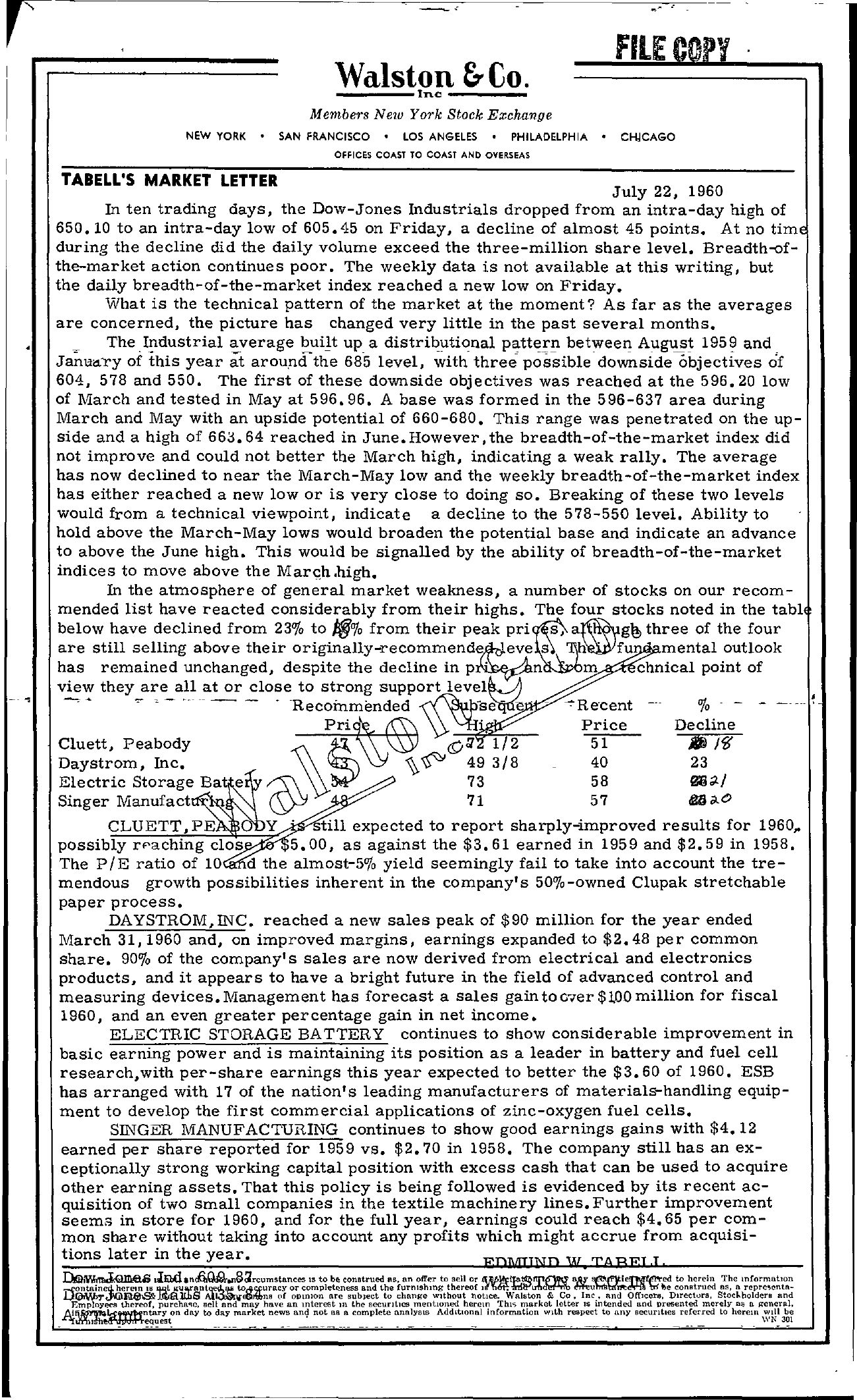 Walston &CO. Inc – FILE Members New York Stock Exchange NEW YORK SAN FRANCISCO LOS ANGELES PHILADELPHIA CI-IICAGO OFFICES COAST TO COAST AND OVERSEAS TABELL'S MARKET LETTER July 22, 1960 In ten trading days, the Dow-Jones Industrials dropped from an intra-day high of 650.10 to an intra-day low of 605.45 on Friday, a decline of almost 45 points. At no tim during the decline did the daily volume exceed the three-million share level. Breadth-of- the-market action continues poor. The weekly data is not available at this writing, but the daily breadth-of-the-market index reached a new low on Friday. What is the technical pattern of the market at the moment As far as the averages are concerned, the picture has changed very little in the past several months. The Industrial average bui!t up a distributional pattern between August 1959 and Jarmlry of this year at arou.ndthe 685 level, with three possible downside objectives of 604, 578 and 550. The first of these downside objectives was reached at the 596.20 low of March and tested in May at 596.96. A base was formed in the 596-637 area during March and May with an upside potential of 660-680. This range was penetrated on the up- side and a high of 66l. 64 reached in June. However, the breadth-of-the-market index did not improve and could not better the March high, indicating a weak rally. The average has now declined to near the March-May low and the weekly breadth-of-the-market index has either reached a new low or is very close to doing so. Breaking of these two levels would from a technical viewpoint, indicate a decline to the 578-550 level. Ability to hold above the March-May lows would broaden the potential base and indicate an advance to above the June high. This would be signalled by the ability of breadth-of-the-market indices to move above the Marc;h .high. In the atmosphere of general market weakness, a number of stocks on our recom- mended list have reacted conSiderably from their highs. The four stocks noted in the tabl ;go/.below have declined from 230/. to from their peak Prim' three of the four are still selling above their originally-recommende;fJev s hWfu mental outlook has remained unchanged, despite the decline in m chnical point of they .. at or to strong support .. – -. L Cluett, Peabody Daystrom, Inc. Electric Storage Bat e Singer Manufact 0)J S)!l 1/2 493/8 73 71 51 40 58 57 .. Iff 23 OOJ./ ail-o CLUETT, PE Y till expected to report sharply-improved results for 1960,. possibly rf'aching clos 5.00, as against the 3.61 earned in 1959 and 2.59 in 1958. The pIE ratio of 10 d the almost-50/. yield seemingly fail to take into account the tre- mendous growth possibilities inherent in the company's 500/0-owned Clupak stretchable paper process. DAYSTROM,INC. reached a new sales peak of 90 million for the year ended March 31,1960 and, on improved margins, earnings expanded to 2.48 per common share. 900/0 of the company's sales are now derived from electrical and electronics products, and it appears to have a bright future in the field of advanced control and measuring devices. Management has forecast a sales gain to c-;er 1,00 million for fiscal 1960, and an even greater percentage gain in net income. ELECTRIC STORAGE BATTERY continues to show considerable improvement in basic earning power and is maintaining its position as a leader in battery and fuel cell research,with per-share earnings this year expected to better the 3.60 of 1960. ESB has arranged with 17 of the nation's leading manufacturers of materials-handling equip- ment to develop the first commercial applications of zinc-oxygen fuel cells. SINGER MANUFACTURING continues to show good earnings gains with 4.12 earned per share reported for 1959 vs. 2.70 in 1958. The company still has an ex- ceptionally strong working capital position with excess cash that can be used to acquire other earning assets. That this policy is being followed is evidenced by its recent ac- quisition of two small companies in the textile machinery lines. Further improvement seemil in store for 1960, and for the full year, earnings could reach 4.65 per common share without taking into account any profits which might accrue from acquisi- tions later in the year. EpDITTTND JU TA BEl .1 , 1J00 IS to be construed as, an offer to sell or aAY to herein The Informubon herem 16 q.qt torir.furacy or and the furnishIng thereof 11'Il6t;rlIYU'hch!f1rib b'hutn'sbl1tMl b1l1e construed as, a of oPlnJon nre subJect to change Without notice. Walston & Co. Inc. nnd Offlccrs, Dlreeturs, Stockholders and Employees thereof, purchR'le, sell and mny have an mterest III the SecUrltlCS mentIOned hercln ThiS market letter IS intended Ilnd presented merely as II. gcncral. on day to day market news and not IlB a complete nnalYsls AddItional information With respect to any securities referrcd to herem Will be