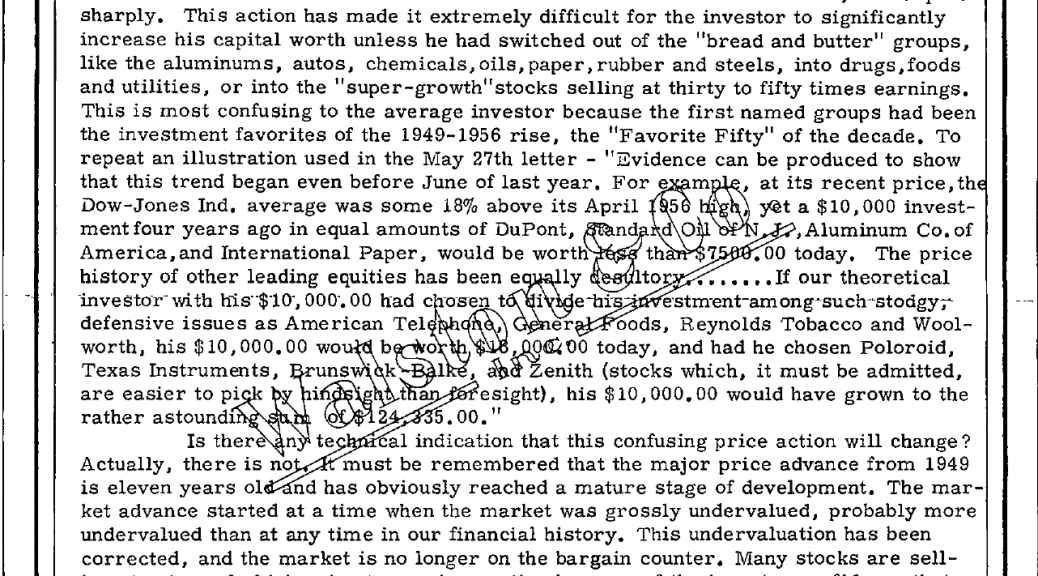 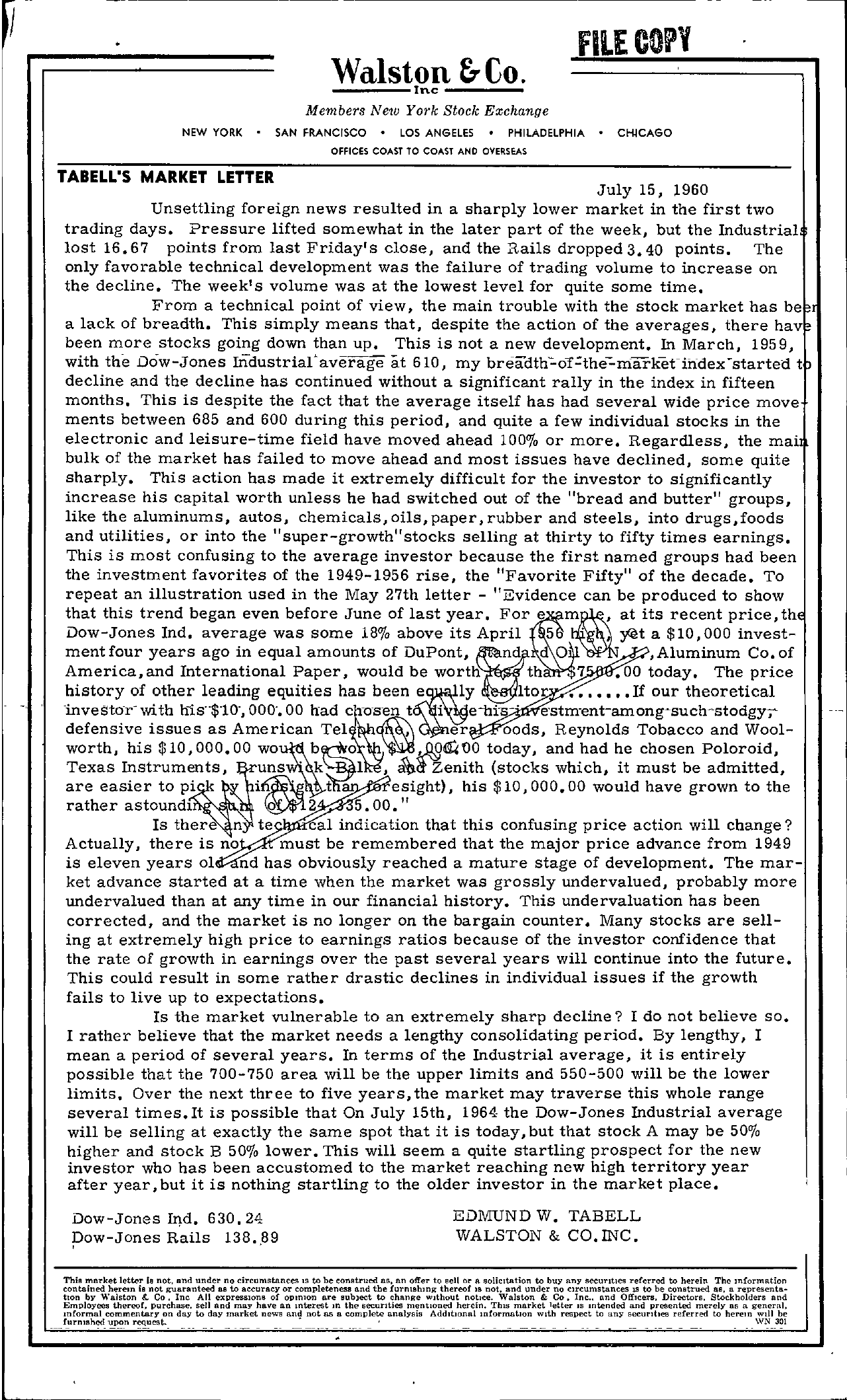 ———————- I filE COpy Walston &CO. Inc Members Ne1v YOI'k Stock Exchange NEW YORK SAN FRANCISCO LOS ANGELES PHILADELPHIA CHICAGO OFFICES COAST TO COAST AND OVERSEAS TABELL'S MARKET LETTER July 15, 1960 Unsettling foreign news resulted in a sharply lower market in the first two trading days. Pressure lifted somewhat in the later part of the week, but the Industrial lost 16.67 points from last Friday's close, and the Rails dropped 3.40 pOints. The only favorable technical development was the failure of trading volume to increase on the decline. The week's volume was at the lowest level for quite some time. From a technical point of view, the main trouble with the stock market has be a lack of breadth. This simply means that, despite the action of the averages, there hav been more stocks going down than up. This is not a new development. In March, 1959, with the Dow-Jones Industrial'average at 610, my breadth-'oTthe-'rnarket-ihdex-started t) decline and the decline has continued without a significant rally in the index in fifteen months. This is despite the fact that the average itself has had several wide price move ments between 685 and 600 during this period, and quite a few individual stocks in the electronic and leisure-time field have moved ahead 100/0 or more. Regardless, the mai bulk of the market has failed to move ahead and most issues have declined, some quite sharply. This action has made it extremely difficult for the investor to significantly increase his capital worth unless he had switched out of the bread and butter groups, like the aluminums, autos, chemicals,oils,paper,rubber and steels, into drugs,foods and utilities, or into the super-growthstocks selling at thirty to fifty times earnings. This is most confusing to the average investor because the first named groups had been the investment favorites of the 1949-1956 rise, the Favorite Fifty of the decade. To repeat an illustration used in the May 27th letter – Evidence can be produced to show that this trend began even before June of last year. its recent price, thE Dow-Jones Ind. average was some 18/0 above its April 5 , yet a 10,000 invest- i i 'mentfour years ago in equal amounts of DuPont, e d 0 ,Aluminum Co.of America, and International Paper, would be wortli th 7 .00 today. The price of leading equities has been lly Ito , If our theoretical mvestor Wl th hl.s 10,000.00 I r aCdOBiBn t 1 e-hlB- e'stm-ent-among-such'-stodgy, defensive issues as American Tel er oods, Reynolds Tobacco and Wool- worth, his 10,000.00 today, and had he chosen Poloroid, Texas uns' k I, Zenith (stocks which, it must be admitted, are easier to pi t his 10,000.00 would have grown to the ratherastoundl 5.00. Is there n te cal indication that this confusing price action will change Actually, there is no must be remembered that the major price advance from 1949 is eleven years 01 nd has obviously reached a mature stage of development. The mar- ket advance started at a time when the market was grossly undervalued, probably more undervalued than at any time in our financial history. This undervaluation has been corrected, and the market is no longer on the bargain counter, Many stocks are sell- ing at extremely high price to earnings ratios because of the investor confidence that the rate of growth in earnings over the past several years will continue into the future. This could result in some rather drastic declines in individual issues if the growth fails to live up to expectations. Is the market vulnerable to an extremely sharp decline I do not believe so. I rather believe that the market needs a lengthy consolidating period. By lengthy, I mean a period of several years. In terms of the Industrial average, it is entirely possible that the 700-750 area will be the upper limits and 550-500 will be the lower limits. Over the next three to five years, the market may traverse this whole range several times.It is possible that On July 15th, 1964 the Dow-Jones Industrial average will be selling at exactly the same spot that it is today, but that stock A may be 50 higher and stock B 50/0 lower. This will seem a quite startling prospect for the new investor who has been accustomed to the market reaching new high territory year after year, but it is nothing startling to the older investor in the market place. Dow-Jones Iq.d. 630.24 D, ow-Jones Rails 138..89 EDMUND W. TABELL WALSTON & CO. INC. This market letter Is not. and under no circumstances IS to be construed as, nn offer to sell or a solicitation to buy any SecUTIties referred to herein The mformation contained herem iB not guaranteed as to accuracy or completeness and the furnlshmg thereof IS not. and under no circumstances UI to be construed aB, Ii representa tlon by lA'alston &- Co, Inc All expressIons of opInion are subJect to change Without notice. Walston & Co. Inc.. and Offlcers, Directors, Stockholders and Employees thereof, purchase, sell and may have an mterest In the securities mentiOned herein. ThIS market letter IS mtended and presented merely (IS a general, informal commentary on day to day market neWD and nOl as a complete analysis Additional mformatlOn With respect to IIny securities referred to herem wIll be –furmshe-d-up-o–n re-qu-est.- — — — – – – – — – – – – — – — – — – – – — WN—3-01