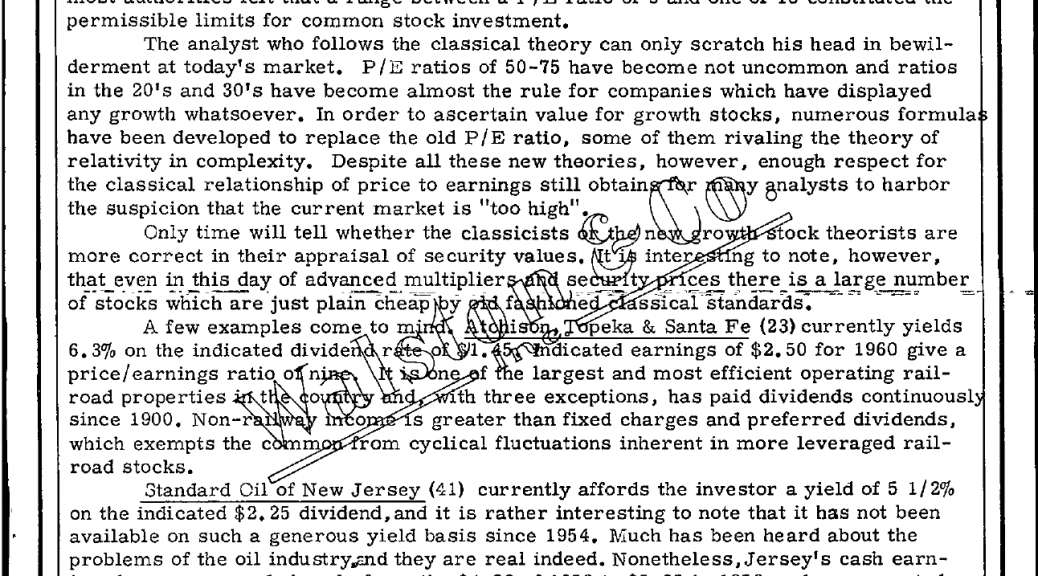 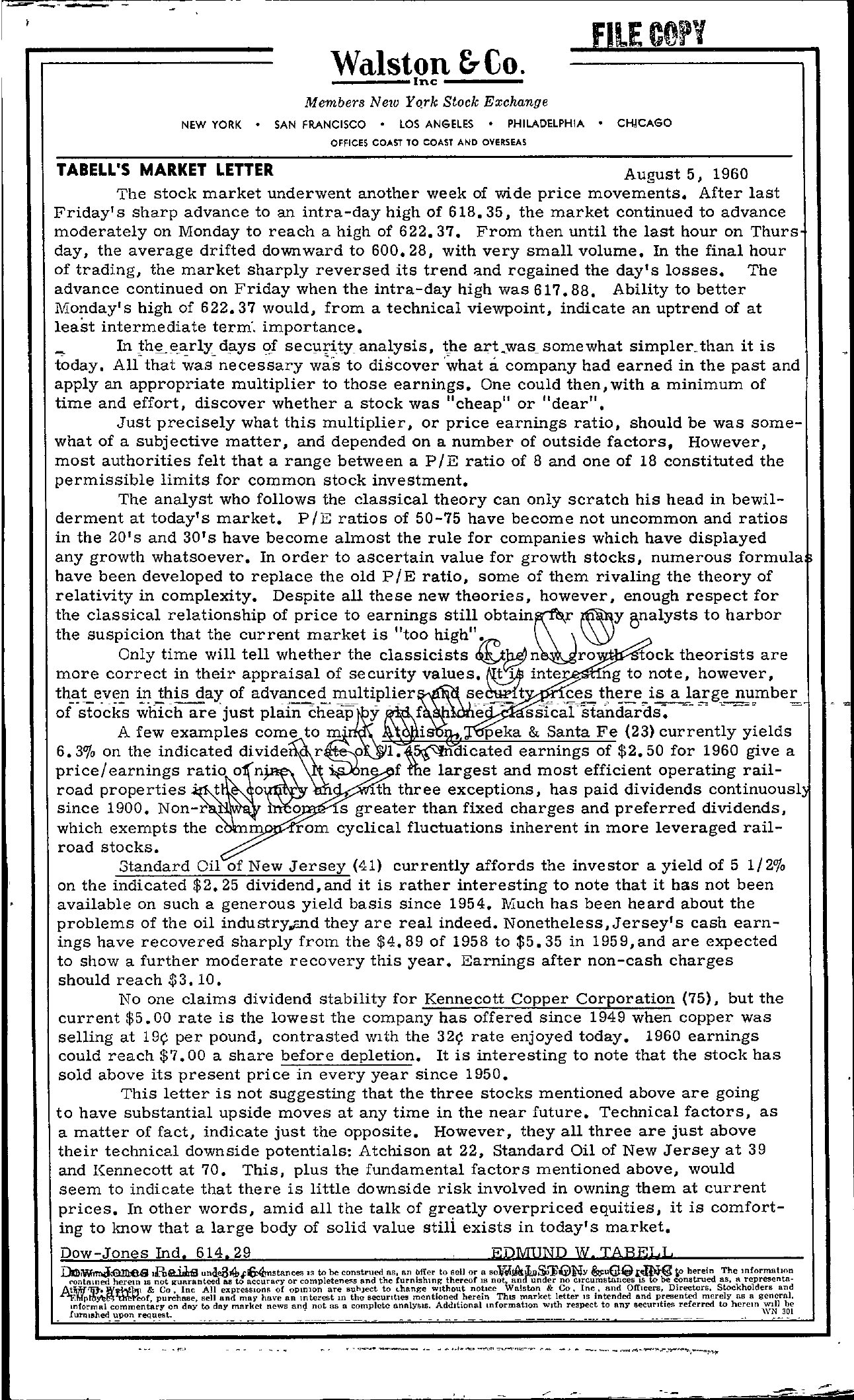 I -;;-.-;;—— – – .- Walston &reo. Inc lE COPV Members New YQrk Stock Exchange NEW YORK SAN FRANCISCO LOS ANGELES PHILADELPHIA CHICAGO OFFICES COAST TO COAST AND OVERSEAS TABEll'S MARKET lETTER August 5, 1960 The stock market underwent another week of wide price movements. After last Friday's sharp advance to an intra-day high of 618.35, the market continued to advance moderately on Monday to reach a high of 622.37. From then until the last hour on Thurs day, the average drifted downward to 600.28, with very small volume. In the final hour of trading, the market sharply reversed its trend and rcgained the day's losses. The advance continued on Friday when the intra-day high was 617.88. Ability to better Monday's high of 622.37 would, from a technical viewpoint, indicate an uptrend of at least intermediate term', importance. In days ()f secu,ity analysis, the somewhat simpler. than it is atoday. All that was- necessary wa's to discover 'what company had earned in the past and apply an appropriate multiplier to those earnings. One could then, with a minimum of time and effort, discover whether a stock was cheap or dear. Just precisely what this multiplier, or price earnings ratio, should be was some- what of a subjective matter, and depended on a number of outside factors, However, most authorities felt that a range between a P /E ratio of 8 and one of 18 constituted the permissible limits for common stock investment. The analyst who follows the classical theory can only scratch his head in bewil- derment at today's market. P /E ratios of 50-75 have become not uncommon and ratios in the 20's and 30's have become almost the rule for companies which have displayed any growth whatsoever. In order to ascertain value for growth stocks, numerous formula have been developed to replace the old PiE ratio. some of them rivaling the theory of relativity in complexity. Despite all these new theories, however, enough respect for the classical relationship of price to earnings still the suspicion that the current market is too high. to harbor \0J Only time will tell whether the classicists n ro tock theorists are more correct in their appraisal of security values.lt'jAl inte ng to note, however, dar of of stocks wliich are just plain a numbe!.. f 'e . ssicalsiindaras — . – – A few examples come i peka & Santa Fe (23) currently yields 6.30/0 on the indicated 0 1.t5('1rloicated earnings of 2.50 for 1960 give a price/earnings 0 nii' ' n f the largest and most efficient operating rail- road properties' t 0 th three exceptions, has paid dividends continuousl since 1900. Non-r I lOS greater than fixed charges and preferred dividends, which exempts the c rom cyclical fluctuations inherent in more leveraged rail- road stocks. 3tandard Oil of New Jersey (41) currently affords the investor a yield of 5 1/2 on the indicated 2.25 dividend, and it is rather interesting to note that it has not been available on such a generous yield basis since 1954. Much has been heard about the problems of the oil industry.;..nd they are real indeed. Nonetheless,Jersey's cash earn- ings have recovered sharply from the 4.89 of 1958 to 5.35 in 1959,and are expected to show a further moderate recovery this year. Earnings after non-cash charges should reach 3.10. No one claims dividend stability for Kennecott Copper Corporation (75), but the current 5.00 rate is the lowest the company has offered since 1949 when copper was selling at 19 per pound. contrasted WIth the 32 rate enjoyed today. 1960 earnings could reach 7.00 a share before depletion. It is interesting to note that the stock has sold above its present price in every year since 1950. This letter is not suggesting that the three stocks mentioned above are going to have substantial upside moves at any time in the near future. Technical factors, as a matter of fact, indicate just the opposite. However. they all three are just above their technical downside potentials Atchison at 22, Standard Oil of New Jersey at 39 and Kennecott at 70. This, plus the fundamental factors mentioned above, would seem to indicate that there is little downside risk involved in owning them at current prices. In other words. amid all the talk of greatly overpriced equities. it is comfort- ing to know that a large body of solid value stili exists in today's market. Dow-Jones Ind. 614.29 EDMUND W. TAB ELL lRaiJrla IS to be construed as, nn offer to sell or n ,eHGl herein The mformahon C'ontmned herem IS not gllftranteed as t6 nccursty or compietene5s and the furnishmg thereof IS not, andunder no c.lrc.umstances IS to be construed ns, a representa- .dtW'lj). Wll'ktbtl & Co Inc All expreSSlonll of optnlOn are BUhJect to l.hange Without notice Walston & Co . Inc . and Officers, Directors, Stockholderll Bnd sell and may have an mterest m the secUrltws mentioned herein ThiS market letter IS intended and presented merely as B general, Informal on dB; to day market news anq. not as a complete analYSIS. Additional Informatton With respect to any securities referred to herem will be . . . .. .. -.- . f'-'