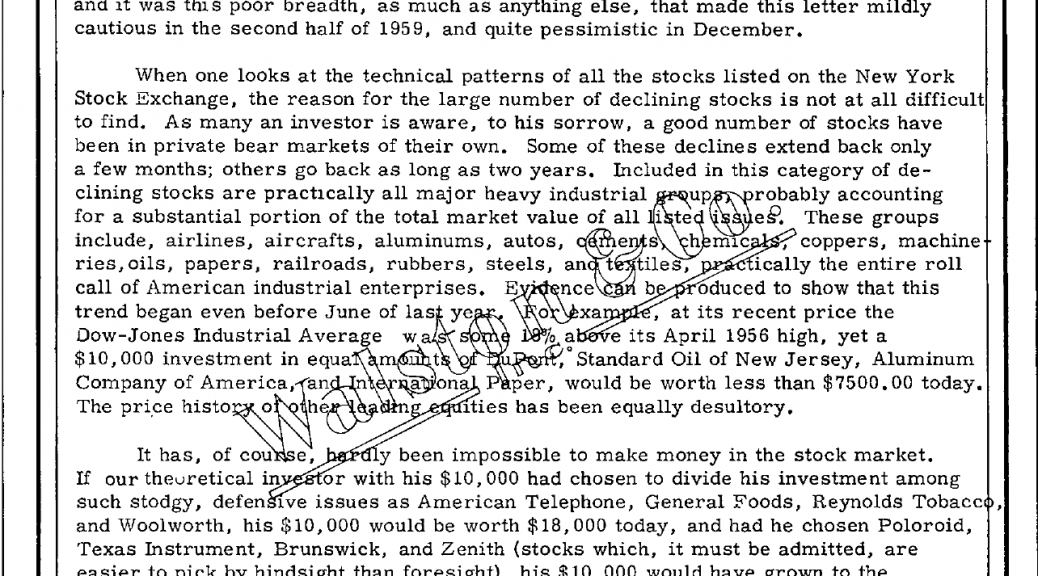 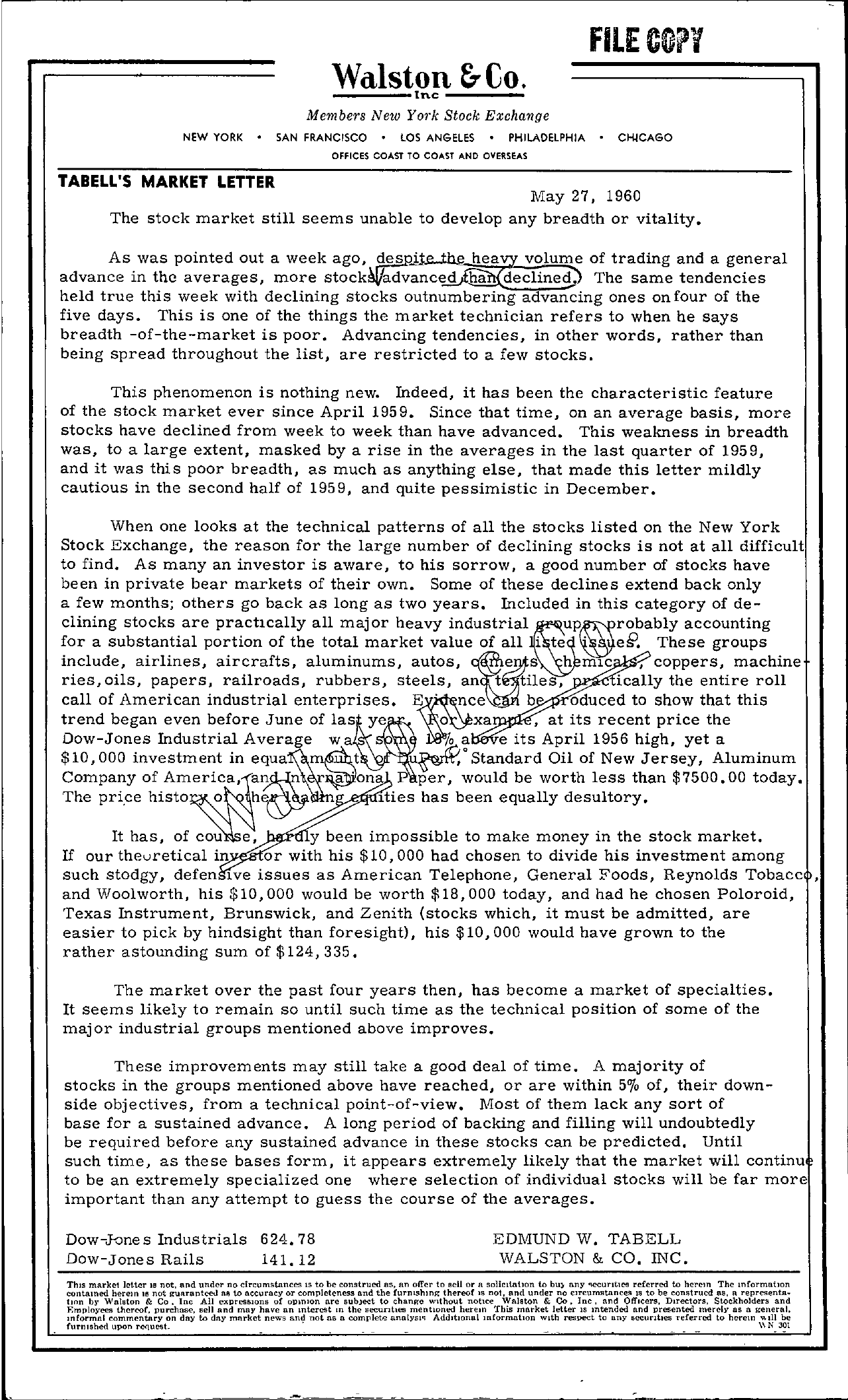 FILE Walston &- Co. Inc – – – – – Members New YOTk Stock Exchange NEW YORK SAN FRANCISCO LOS ANGELES PHILADELPHIA OFFICES COAST TO COAST AND OVERSEAS TABEll'S MARKET lETTER May 27, 1960 The stock market still seems unable to develop any breadth or vitality. As was pointed out a week ago, despjj.e…h.e heavy volume of trading and a general advance in the averages, more stockWadvanced.tha1ldeclinedJ The same tendencies held true this week with declining stocks outnumbering advancing ones on four of the five days. This is one of the things the market technician refers to when he says breadth -of-the-market is poor. Advancing tendencies, in other words, rather than being spread throughout the list, are restricted to a few stocks. This phenomenon is nothing new. Indeed, it has been the characteristic feature of the stock market ever since April 1959. Since that time, on an average basis, more stocks have declined from week to week than have advanced. This weakness in breadth was, to a large extent, masked by a rise in the averages in the last quarter of 1959, and it was this poor breadth, as much as anything else, that made this letter mildly cautious in the second half of 1959, and quite pessimistic in December. When one looks at the technical patterns of all the stocks listed on the New York Stock Exchange, the reason for the large number of declining stocks is not at all difficult to find. As many an investor is aware, to his sorrow, a good number of stocks have been in private bear markets of their own. Some of these declines extend back only a few months; others go back as long as two years. Included in this category of de- clining stocks are practlcally all major heavy accounting for a substantial portion of the total market value of all i te These groups include, airlines, aircrafts, aluminums, autos, h mlC ,coppers, machine ries, oils, papers, railroads, rubbers, steels, an t tiles, n ically the entire roll call of American industrial enterprises. EEnce b oduced to show that this trend began even before June of Dow-Jones Industrial Average w 0 ,at its recent price the 0 aoeve its April 1956 high, yet a 10,000 investment in Oil of New Jersey, Aluminum Company of P per, would be worth less than 7500.00 today. The price II!..emlities has been equally desultory. It has, of y been impossible to make money in the stock market. If ourtheuretical in or with his 10,000 had chosen to divide his investment among such stodgy, defen lve issues as American Telephone, General Foods, Reynolds Tobacc , and Woolworth, his 10,000 would be worth 18,000 today, and had he chosen Poloroid, Texas Instrument, Brunswick, and Zenith (stocks which, it must be admitted, are easier to pick by hindsight than foresight), his 10,000 would have grown to the rather astounding sum of 124, 335. The market over the past four years then, has become a market of specialties. It seems likely to remain so until such time as the technical position of some of the major industrial groups mentioned above improves. These improvements may still take a good deal of time. A majority of stocks in the groups mentioned above have reached, or are within 5 of, their downside objectives, from a technical point-of-view. Most of them lack any sort of base for a sustained advance. A long period of backing and filling will undoubtedly be required before any sustained advance in these stocks can be predicted. Until such time, as these bases form, it appears extremely likely that the market will continu to be an extremely specialized one where selection of individual stocks will be far more important than any attempt to guess the course of the averages. Dow-Jone s Industrials 624.78 DOw-Jones Rails 141. 12 EDMUND W. TABELL WALSTON & CO. INC. Thls market letter IS not, and under no circumstances IS to be construed as, an offer to sell or a soliCitation u bu)- any '1(cUTltU!9 referred to herem The Information contamed herem 18 not gullrantceJ ru; to aecuracy or completeness and the furnlShlng' thereof IS not, and \mder no C1Tcumstanl!CS 15 to be construed as, a repre!'!enta. tlnn by 'Walston & Co. Inc All expressions of opinion arc subJect to change Without notIce Walston & Co. Inc, and Offlccrs. Directors, Stockholders and Employees thereof, purchase, sell and may have an mtcrcst In the secUrities mentioned herein This market letter IS mtended nnd presented merely as a general, Informal commentary on day to day market news and not as a completP- Addltlonnl mformatIon With respect to any SecUrIties referred to herem '\\tIl be furmshed upon request. . . . . \\ N.