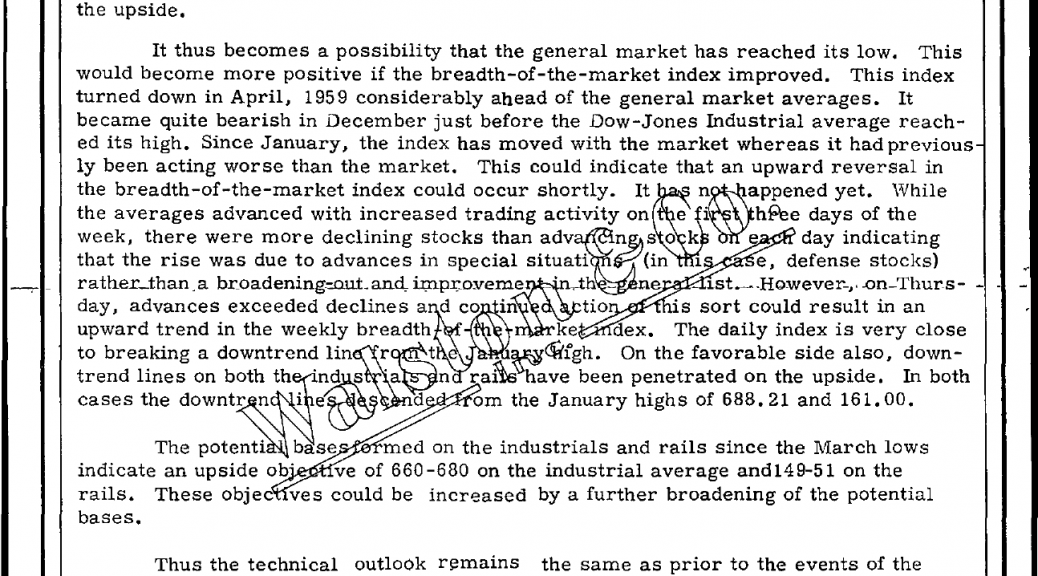 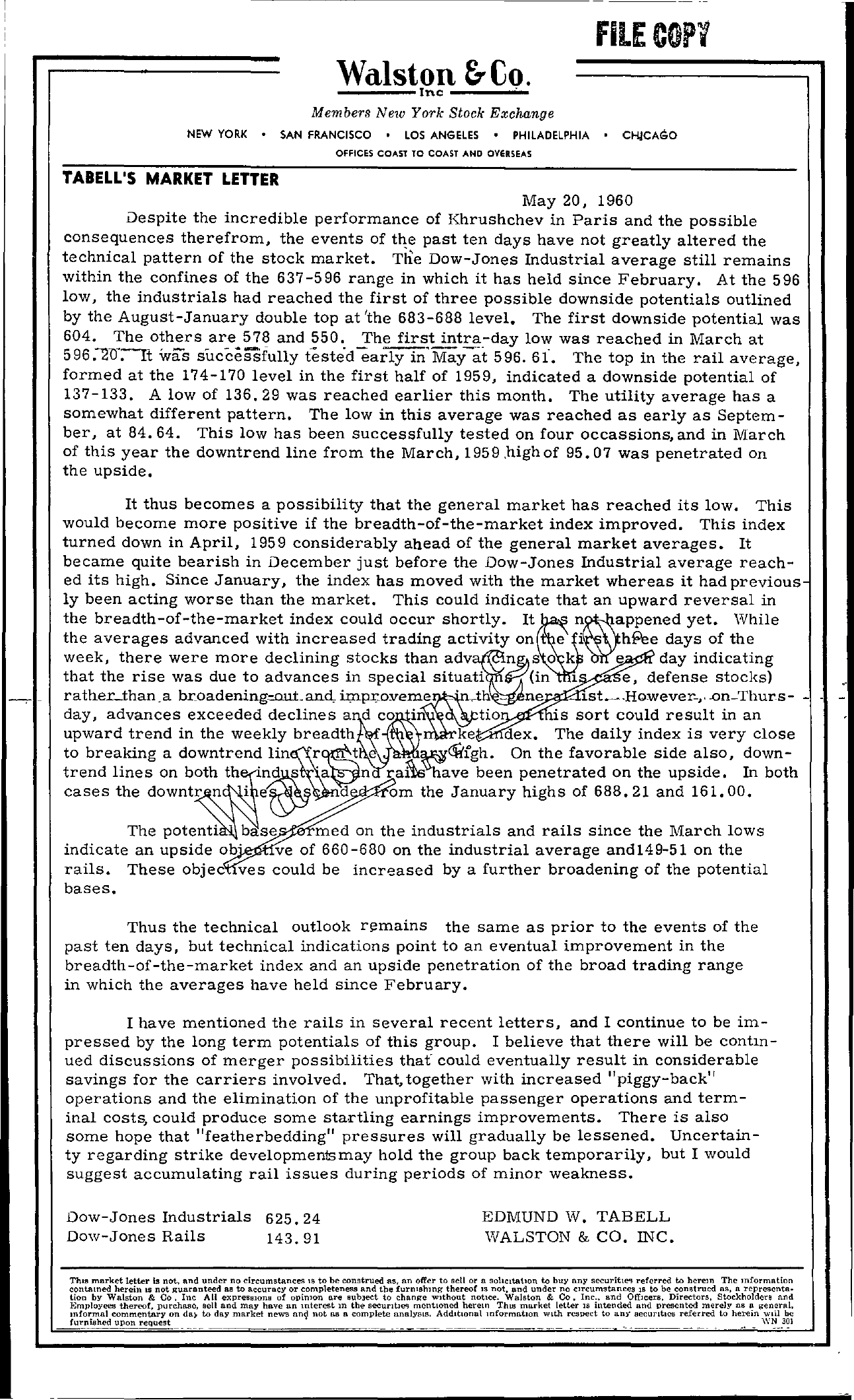 fiLE COPl Walston &- Co. ' Members New York Stock Exchange NEW YORK SAN FRANCISCO LOS ANGELES PHILADELPHIA CKICAGO OFFICES COAST TO COAST AND OVERSEAS TABELL'S MARKET LETTER May 20, 1960 0espite the incredible performance of Khrushchev in Paris and the possible consequences therefrom, the events of past ten days have not greatly altered the technical pattern of the stock market. The Dow-Jones Industrial average still remains within the confines of the 637-596 range in which it has held since February. At the 596 low, the industrials had reached the first of three possible downside potentials outlined by the August-January double top at 'the 683-688 level. The first downside potential was 604. The others are 578 and 550. The first intra-day low was reached in March at 596.-'2'0—'1 was successfully testedearly inMay-at 596, 6f. The top in the rail average, formed at the 174-170 level in the first half of 1959, indicated a downside potential of 137-133. A low of 136.29 was reached earlier this month. The utility average has a somewhat different pattern. The low in this average was reached as early as September, at 84.64. This low has been successfully tested on four occassions, and in March of this year the downtrend line from the March, 1959 ,high of 95.07 was penetrated on the upside. It thus becomes a possibility that the general market has reached its low. This would become more positive if the breadth-of-the-market index improved. This index turned down in April, 1959 considerably ahead of the general market averages. It became quite bearish in December just before the Dow-Jones Industrial average reach- ed its high. Since January, the index has moved with the market whereas it had previous ly been acting worse than the market. This could indicate that an upward reversal in the breadth-of-the-market index could occur shortly. yet. While the averages advanced with increased trading activity on e fr hF'ee days of the week, there were more declining stocks than s0 k e day indicating that the rise was due to advances in special situati s(in 11!- e, defense stocks) ratherthan,a broadeninguLancL til e — day, advances exceeded declines a d co in tio is sort could result in an upward trend in the weekly breadth ke iiex. The daily index is very close to breaking a downtrend lin r t Clfi'gh. On the favorable side also, down- cases the downtr n i e d om the January highs of 688.21 and 161.00. The potenti base med on the industrials and rails since the March lows indicate an upside ob' ve of 660-680 on the industrial average and149-51 on the rails. These objec ves could be increased by a further broadening of the potential bases. Thus the technical outlook the same as prior to the events of the past ten days, but technical indications point to an eventual improvement in the breadth-of-the-market index and an upside penetration of the broad trading range in which the averages have held since February. I have mentioned the rails in several recent letters, and I continue to be impressed by the long term potentials of this group. I believe that there will be contmued discussions of merger possibilities thaf could eventually result in considerable savings for the carriers involved. That, together with increased piggy-back operations and the elimination of the unprofitable passenger operations and terminal costs, could produce some sta,rtling earnings improvements. There is also some hope that featherbedding pressures will gradually be lessened. Uncertainty regarding strike developmen1smay hold the group back temporarily, but I would suggest accumulating rail issues during periods of minor weakness. Dow-Jones Industrials 625.24 Dow-Jones Rails 143.91 EDMUND W. TABELL WALSTON & CO. INC. This market letter is not, nnd under no circumstances IS to be construed as, an offer to sell or a sohcltatlon to buy any referred to herem The mformation contained herein IS not gunranteed 8.Il to accuracy or completeness and the furnlsnmg thereof IS not, nnd under no cIrcumstances IS to be construed as, a representa- tion by Walston & Co Inc All expreSSIOns of opinIon are subJect to change wIthout nobce Walston & Co. Inc. and Offlcers. Directors, Stockholders nnd therrof, scll and may have nn lOtcrest m the- secUrlUeJ mentIOned herem ThiS marKet letter IS intended and presented merely as general, mformal commentary on da) to day market news ang not as a complete analYSIS. Additional InformatIOn With respect to any seCUrltlCB referred to herem Will be upon request T .