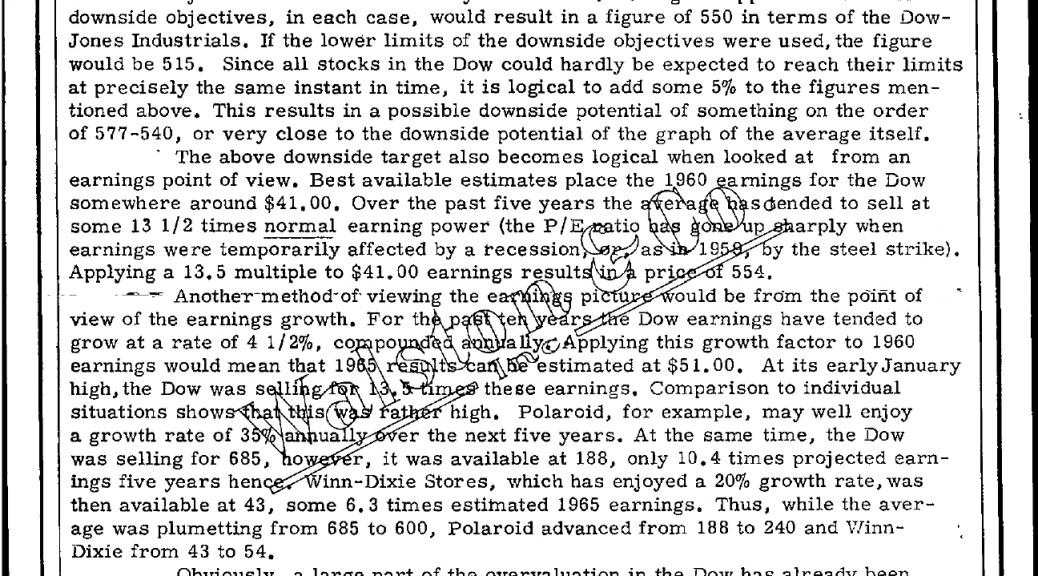 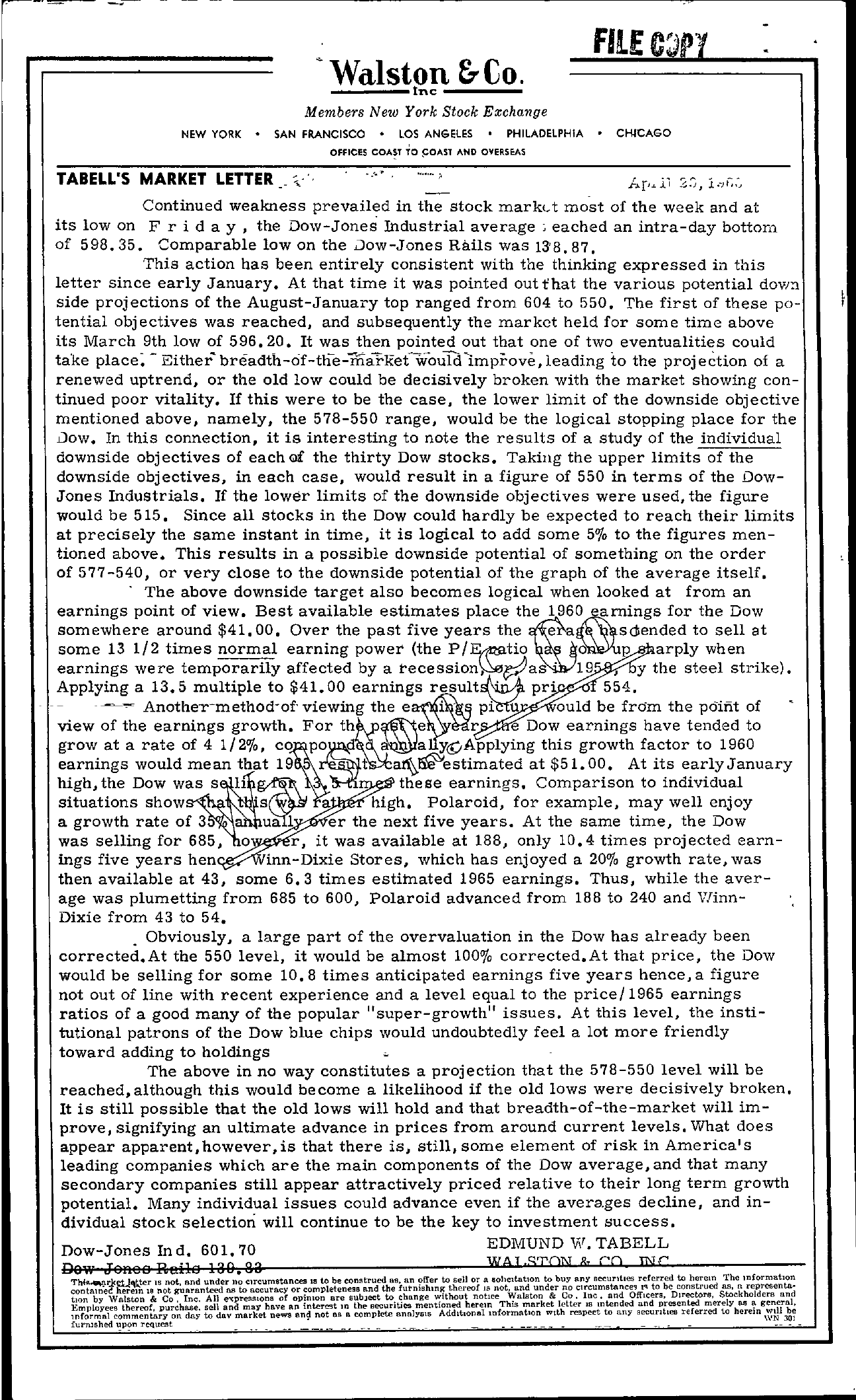 &Co. tnc FIlE CJP1 Members New York Stock Exchange NEW YORK SAN FRANCISCO LOS ANGELES PHILADELPHIA CHlCAGO OffiCES TO AND OVERSEAS TABEll'S MARKET lETTER ;.,' . ….. ;. r.rl..J.Lll ';.,,1.-)1,,-, Continued weakness prevailed in the stock mark-t most of the week and at its low on F rid a y , the Dow-Jones Industrial average; eached an intra-day bottom of 598.35. Comparable low on the ,Jow-Jones Rails was 13'8.87. This action has been entirely consistent with the thinking expressed in this letter since early January. At that time it was pointed out ihat the various potential doVl side projections of the August-January top ranged from 604 to 550. The first of these po- tential objectives was reached, and subsequently the market held for some time above its March 9th low of 596.20. It was then pointed out that one of two eventualities could take place; – Either' breadth-of-tlle-IrlarKefwoulcn,mprove, leading to the projection of a renewed uptrend, or the old low could be decisively broken with the market showing con- tinued poor vitality. If this were to be the case, the lower limit of the downside objective mentioned above, namely, the 578-550 range, would be the logical stopping place for the ,Jow. In this connection, it is interesting to note the results of a study of the individual downside objectives of each0i the thirty Dow stocks. Taking the upper limits of the downside objectives, in each case, would result in a figure of 550 in terms of the Dow- Jones Industrials. If the lower limits of the downside objectives were used, the figure would be 515. Since all stocks in the Dow could hardly be expected to reach their limits at precisely the same instant in time, it is logical to add some 5 to the figures men- tioned above. This results in a possible downside potential of something on the order of 577-540, or very close to the downside potential of the graph of the average itself. The above downside target also becomes logical when looked at from an earnings point of view. Best available estimates place the 1960 earnings for the Dow somewhere around 41.00. Over the past five years the some 13 1/2 times normal earning power (the to sell at arply when earnings were temporarily affected by a 19 , Y the steel strike). Applying a 13.5 multiple to 41. 00 earnings pri 554. — – Anothermethod-of viewing the ptctGl ould be from the point of – view of the earnings growth. For grow at a rate of 4 1/2/0, earnings would mean that 19 t r e Dow earnings have tended to YiYApplying this growth factor to 1960 at 51.00. At its early January high, the Dow situations show 11 's these earnings. Comparison to individual a high. Polaroid, for example, may well enjoy a growth rate of 3 ua 1 er the next five years. At the same time, the Dow was selling for 685, 0 r, it was available at 188, only 10.4 times projected earn- ings five years hen inn-Dixie Stores, which has enjoyed a 20 growth rate, was then available at 43, some 6.3 times estimated 1965 earnings. Thus, while the aver- age was plumetting from 685 to 600, Polaroid advanced from 188 to 240 and Vlinn- Dixie from 43 to 54 . Obviously, a large part of the overvaluation in the Dow has already been corrected. At the 550 level, it would be almost 100 corrected. At that price, the Dow would be selling for some 10.8 times anticipated earnings five years hence, a figure not out of line with recent experience and a level equal to the price/1965 earnings ratios of a good many of the popular super-growth issues. At this level, the insti- tutional patrons of the Dow blue chips would undoubtedly feel a lot more friendly toward adding to holdings The above in no way constitutes a projection that the 578-550 level will be reached, although this would become a likelihood if the old lows were decisively broken. It is still possible that the old lows will hold and that breadth-of-the-market will im- prove, signifying an ultimate advance in prices from around current levels. What does appear apparent, however, is that there is, still, some element of risk in America's leading companies which are the main components of the Dow average, and that many secondary companies still appear attractively priced relative to their long term growth potential. Many individual issues could advance even if the averages decline, and in- dividual stock selection will continue to be the key to investment success. Dow-Jones In d. 601.70 ;Qav,; Jenes Hails laQ. sa EDMUND W. TABELL WAI,8TON 8, CO TNt., IS not, Bnd under no circumstances IS to be construed as. an ffer to se1l or a sohcltatlon to buy any securIties referred to herem The contatne! herem 18 not guaranteed as to accuracy or completeness and the furDlshmg thereof IS not, and under no 1\ to be construed as, n reprcsentn tlon by Walston & Co Inc All expressIOns of opimon are subject to chllnge without notice Walston & Co. Inc, and Officers, Directors, Stockholdcrs and Employees thereof purchase' sell and may have an interest m the securities mentioned herem This market Jetter IS Intended and prescnted merely as general, mformal on day to dnv market news ang not as n complete analYSIS AdditIOnal mformatlon With respect to any securltlcs referred to herem furnished request .. . – – – —