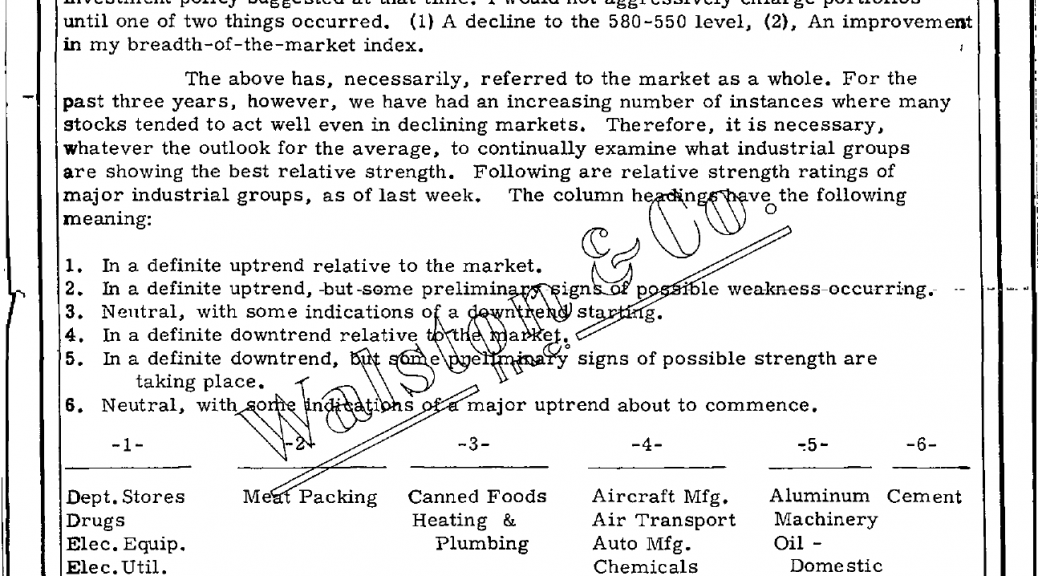 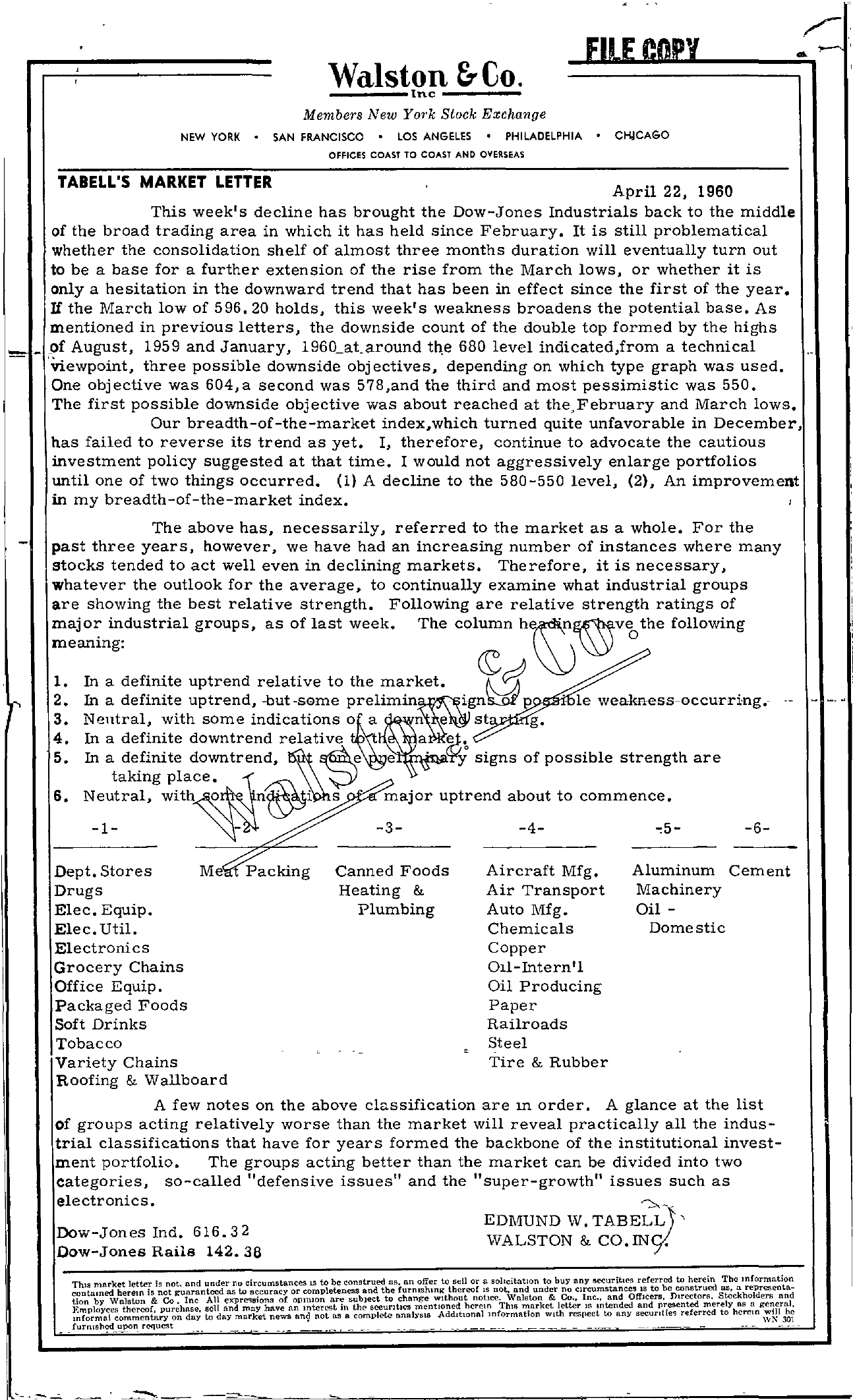 Walston &- Co. Inc —.;… .. .t..y… .;;, Members New York Stock Exchange NEW YORK SAN FRANCISCO LOS ANGELES PHILADELPHIA CKiCAGO OFFICES COAST TO COAST AND OVERSEAS TABEll'S MARKET lETTER April 22, 1960 This week's decline has brought the Dow-Jones Industrials back to the middle of the broad trading area in which it has held since February. It is still problematical whether the consolidation shelf of almost three months duration will eventually turn out to be a base for a further extension of the rise from the March lows, or whether it is only a hesitation in the downward trend that has been in effect since the first of the year. If the March low of 596.20 holds, this week's weakness broadens the potential base. As mentioned in previous letters, the downside count of the double top formed by the highs I.. lf August, 1959 and January, 1960at.around the 680 level indicated,from a technical viewpoint, three possible downside obj ectives, depending on which type graph was used. One objective was 604,a second was 578,and the third and most pessimistic was 550. The first possible downside objective was about reached at the,February and March lows. Our breadth-of-the-market index,which turned quite unfavorable in December, has failed to reverse its trend as yet. I, therefore, continue to advocate the cautious investment policy suggested at that time. I would not aggressively enlarge portfolios until one of two things occurred. (1) A decline to the 580-550 level, (2), An improvement in my breadth-of-the-market index. I The above has, necessarily, referred to the market as a whole. For the past three years, however, we have had an increasing number of instances where many stocks tended to act well even in declining markets. Therefore, it is necessary, whatever the outlook for the average, to continually examine what industrial groups are showing the best relative strength. Following are relative strength ratings of major industrial groups, as of last week. The cOl;n meaning 1. In a definite uptrend relative to the market. 2. In a definite uptrend, -but -some q\Y 1\ gn'S15f' the following W .- 3. Neutral, with some indications 4. In a definite downtrend relative 5. In a definite downtrend, taking V' 6. Ne1ural, with s st g. t 'Lf!ie . signs of possible strength are jor uptrend to -6- – – .. 1 I Dept. Stores Drugs Elec. Equip. Elec. Util. Electronics Grocery Chains Office Equip. Packaged Foods Soft Drinks Tobacco Variety Chains Roofing & Wallboard Canned Foods Heating & Plumbing Aircraft Mfg. Air Transport Auto Mfg. Chemicals Copper Oll-Intern'l Oil Producing Paper Railroads Steel Tire & Rubber Aluminum Cement Machinery Oil – Domestic A few notes on the above classification are m order. A glance at the list of groups acting relatively worse than the market will reveal practically all the indus- trial classifications that have for years formed the backbone of the institutional invest- ment portfolio. The groups acting better than the market can be divided into two categories, so-called defenSive issues and the super-growth issues such as electronics. Dow-Jones Ind. 616.32 Dow-Jones Rails 142.38 EDMUND WALSTON & CO.IN . ThIS market letter is not nnd under no circumstances 13 to be construed as, nn offer to sell or n sohcitatlOn to buy any securities referred to herein Tho mformation contnmed herem is not as to accuracy or completeness and the fUrnIShing thereof IS not, and under no Circumstances 18 to be construed as, khreltesentad t' b Walston & Co Inc All expre'!sions of OPInion are subJect to change Without nollce. Walston & Co., Inc., and Officers, Directors, Stoc 0 ers an thereof purchase sell and may ha.ve an mtercst in the Bccurilles mentioned herein Thl!, market lelter IS Intended and presented merelyhas n on dny to day mnrket news an9 not as a complete analYSIS Addlhonal mformation With respect to nny referred to erem JoI furntshed upon rt'quest . . — – —