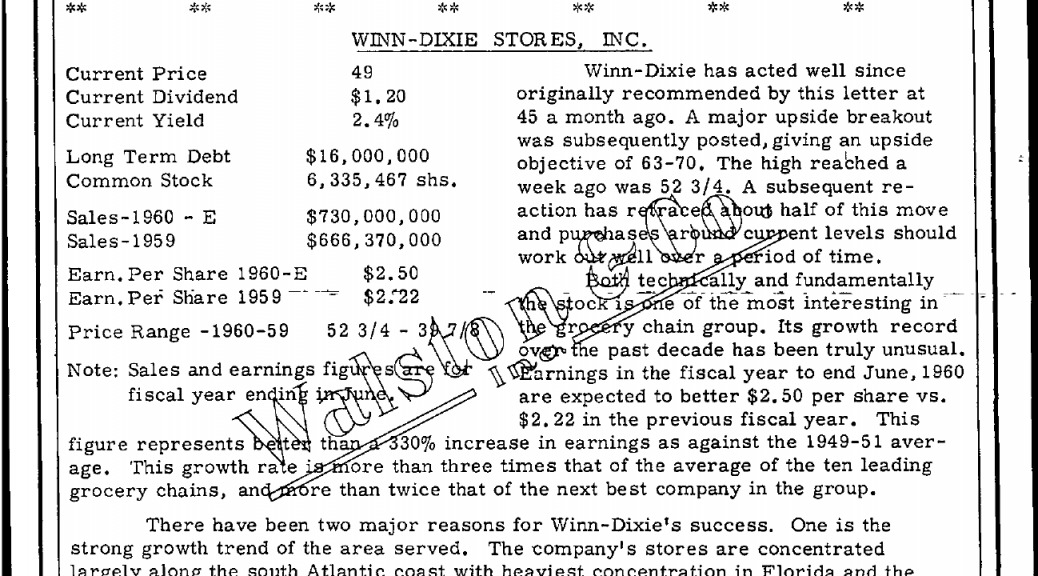 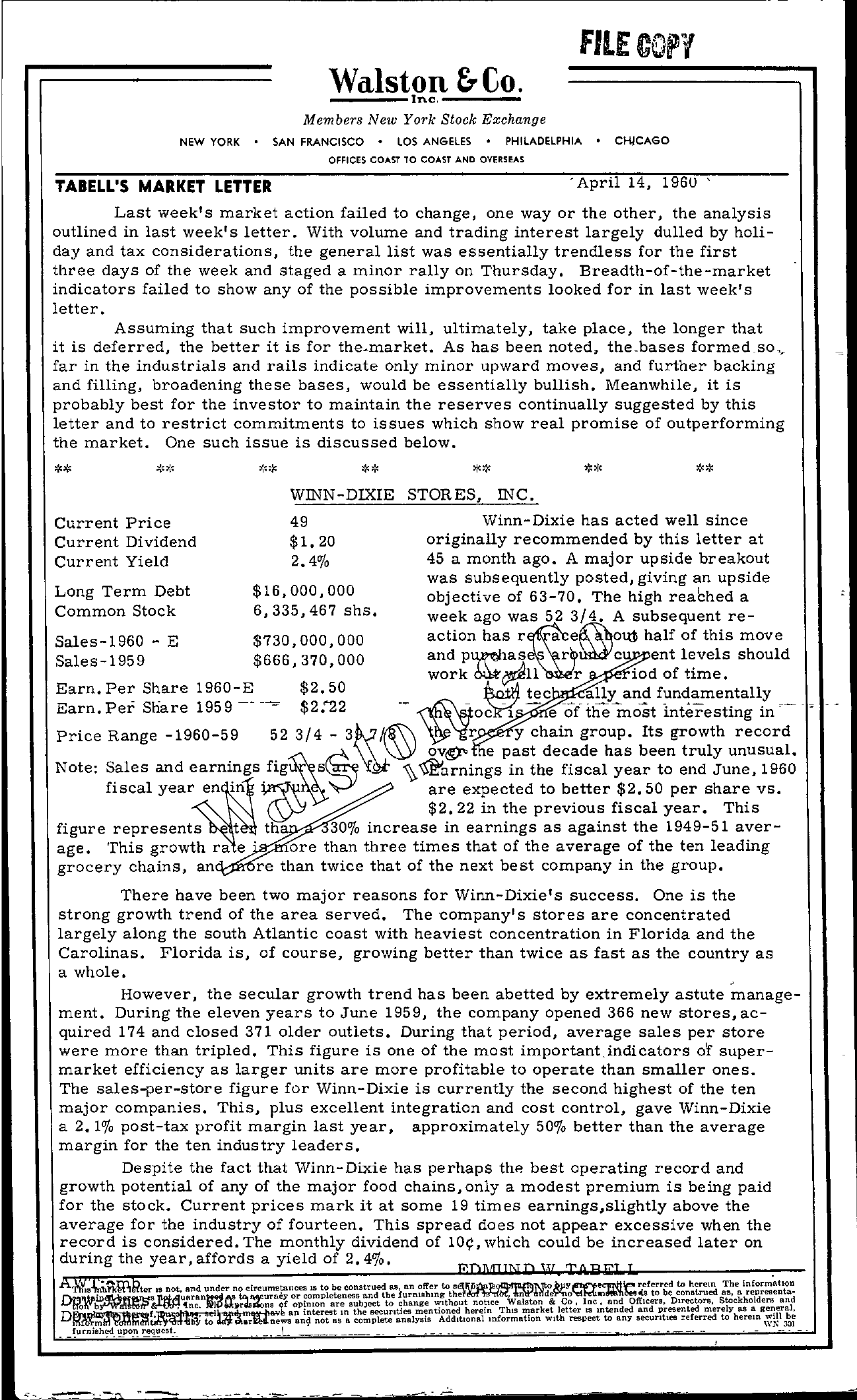 Walstloncn. &- Co. FILE COpy Members New York Stock Exchange NEW YORK SAN FRANCISCO LOS ANGELES PHILADELPHIA CI-IICAGO OFFICES COAST TO COAST AND OVERSEAS TABELL'S MARKET LETTER – April 14, 196U Last week's market action failed to change, one way or the other, the analysis outlined in last week's letter. With volume and trading interest largely dulled by holiday and tax considerations, the general list was essentially trendless for the first three days of the week and staged a minor rally on Thursday. Breadth-of-the-market indicators failed to show any of the possible improvements looked for in last week's letter. Assuming that such improvement will, ultimately, take place, the longer that it is deferred, the better it is for the.market. As has been noted, thebases formed so. far in the industrials and rails indicate only minor upward moves, and further backing and filling, broadening these bases, would be essentially bullish. Meanwhile, it is probably best for the investor to maintain the reserves continually suggested by this letter and to restrict commitments to issues which show real promise of outperforming the market. One such issue is discussed below. WINN-DIXIE STORES, INC. Current Price Current Dividend Current Yield Long Term Debt Common Stock 49 1.20 2.4 16,000,000 6,335,467 shs. Winn-Dixie has acted well since originally recommended by this letter at 45 a month ago. A major upside breakout was subsequently posted, giving an upside objective of 63-70. The high reabhed a week ago was 52 3/4. A subsequent re- Sales-1960 – E Sales-1959 730,000,000 666,370,000 Earn. Per Share 1960-E Earn. Per Share 1959 — 2.50 2.22 action has half of this move and r levels should work M of– r of time. tec ally and fundamentally – e themost interesting in .- . Price Range -1960-59 523/4 – W Y chain group. Its growth record e past decade has been truly unusual. Note Sales and earnings fig s 'arnings in the fiscal year to end June, 1960 fiscal in are expected to better 2.50 per share vs. 2.22 in the previous fiscal year. This figure represents t tlia 30 increase in earnings as against the 1949-51 aver- age. This growth ra e . ore than three times that of the average of the ten leading grocery chains, ancO-avre than twice that of the next best company in the group. , – There have been two major reasons for Winn-Dixie's success. One is the strong growth trend of the area served. The company's stores are concentrated largely along the south Atlantic coast with heaviest concentration in Florida and the Carolinas. Florida is, of course, growing better than twice as fast as the country as a whole. However, the secular growth trend has been abetted by extremely astute management. During the eleven years to June 1959, the company opened 366 new stores,acquired 174 and closed 371 older outlets. During that period, average sales per store were more than tripled. This figure is one of the most important. indicators of supermarket efficiency as larger units are more profitable to operate than smaller ones. The sales-per-store figure for Winn-Dixie is currently the second highest of the ten major companies. This, plus excellent integration and cost control, gave Winn-Dixie a 2.10/0 post-tax profit margin last year, approximately 50 better than the average margin for the ten industry leaders. Despite the fact that Winn-Dixie has perhaps thA best operating record and growth potential of any of the major food chains, only a modest premium is being paid for the stock. Current prices mark it at some 19 times earnings,slightly above the average for the industry of fourteen. This spread does not appear excessive when the record is considered. The monthly dividend of 10, which could be increased later on during the year,affords a yield of 2.4. rT1\Tn W 'TD'T T o 15 not and under no cireumstances IS to be construed as, an offer to referred to herem The InformatIon 5 or completeness and the furnlshmg thei&rf1s'-r/bt', to be construed 85, a repreeenta- ui \ttfWeJillDCrlbdons (If opimon are subJect to change Without notice Walston & Co, Inc, and Officers, Directors, Stockholders and an interest In the secUrtties mentioned herein ThIS market letter IS mtended and presented merely as a general, to news ang not as a complete analysis Addltlontl1 mformation With respect to any seeurlttes referred to herem,W L – – – — —- – –. – — , – — — — -…….