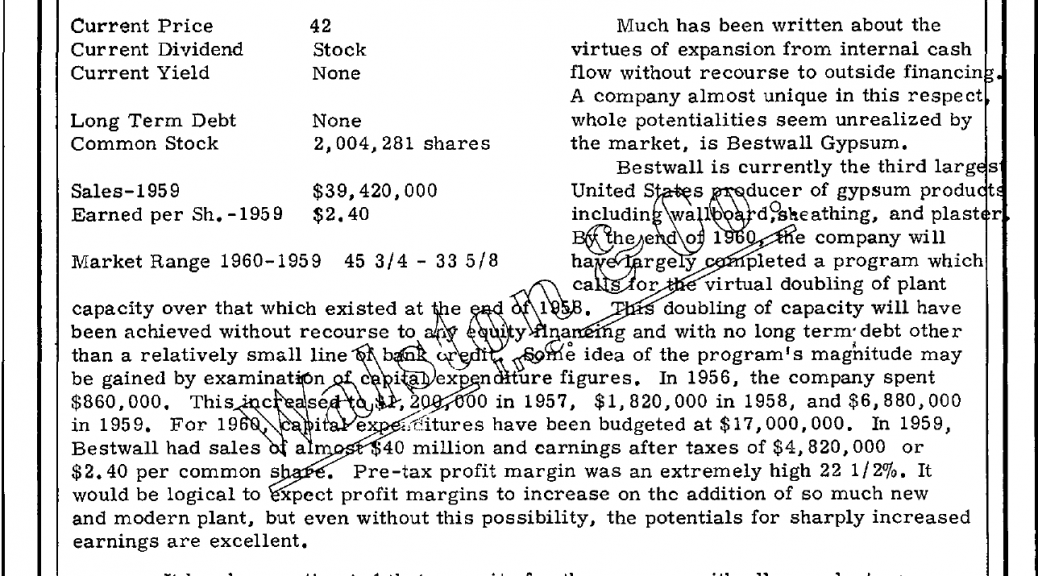 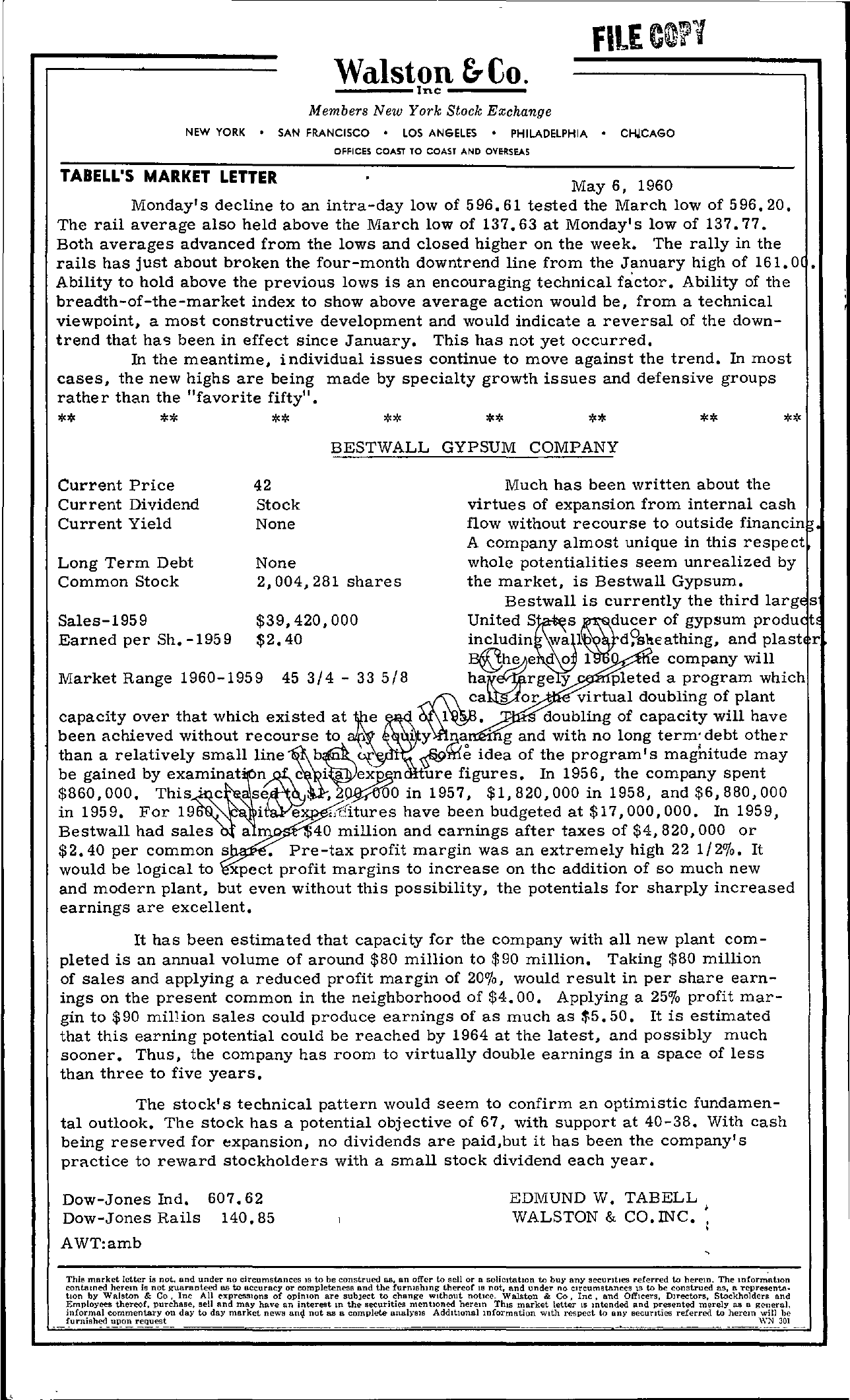 Walston &Co. ———lnc——— Members New York Stock Exchange NEW YORK SAN FRANCISCO LOS ANGELES PHILADELPHIA CI-\ICAGO OFFICES COAST TO COAST AND OVERSEAS TABELL'S MARKET LETTER May 6, 1960 Monday's decline to an intra-day low of 596.61 tested the March low of 596.20. The rail average also held above the March low of 137.63 at Monday's low of 137.77. Both averages advanced from the lows and closed higher on the week. The rally in the rails has just about broken the four-month downtrend line from the January high of 161.0 Ability to hold above the previous lows is an encouraging technical factor. Ability of the breadth-of-the-market index to show above average action would be, from a technical viewpoint, a most constructive development and would indicate a reversal of the down- trend that has been in effect since January. This has not yet occurred. In the meantime, individual issues continue to move against the trend. In most cases, the new highs are being made by specialty growth issues and defensive groups rather than the favorite fifty. BESTWALL GYPSUM COMPANY Current Price 42 Much has been written about the Current Dividend Stock virtues of expansion from internal cash Current Yield None flow without recourse to outside financin A company almost unique in this respect Long Term Debt None whole potentialities seem unrealized by Common Stock 2,004,281 shares the market, is Bestwall Gypsum. Bestwall is currently the third largE S Sales-1959 39,420,000 Earned per Sh.-1959 2.40 United S includin wa 1 of gypsum dsaeathing, and plast r Market Range 1960-1959 45 3/4 – 335/8 e dol company will ha rge y pleted a program which or virtual doubling of plant capacity over that which existed been achieved without recourse to 1 1. doubling of capacity will have i y '!1B; . g and with no long termdebt other than a relatively . idea of the program's magnitude may be gained by 860,000. This' c se ture figures. In 1956, the company spent ,20;9;OnOin1957, 1,820,000 in 1958, and 6,880,000 in 1959. For 19 i e -;1.fitures have been budgeted at 17,000,000. In 1959, Bestwall had sales a '1'40 million and carnings after taxes of 4,820,000 or 2.40 per common s Pre-tax profit margin was an extremely high 22 1/2. It would be logical to xpcct profit margins to increase on thc addition of so much new and modern plant, but even without this possibility, the potentials for sharply increased earnings are excellent. It has been estimated that capacity for the company with all new plant completed is an annual volume of around 80 million to 90 million. Taking 80 million of sales and applying a reduced profit margin of 20, would result in per share earnings on the present common in the neighborhood of 4.00. Applying a 25 profit margin to 90 mill ion sales could produce earnings of as much as 50. It is estimated that this earning potential could be reached by 1964 at the latest, and possibly much sooner. Thus, the company has room to virtually double earnings in a space of less than three to five years. The stock's technical pattern would seem to confirm an optimistic fundamental outlook. The stock has a potential objective of 67, with support at 40-38. With cash being reserved for t!xpansion, no dividends are paid,but it has been the company's practice to reward stockholders with a small stock dividend each year. Dow-Jones Ind. 607.62 Dow-Jones Rails 140.85 AWTamb EDMUND W. TABELL I WALSTON & CO. INC. This market letter is not, and under no circumstances IS to be construed WI, an offer to sell or a soliCitation to buy any SecUTlt..!S referred to herem, The Information contamed herem is not guaranteed us to nccuracy or completeness and the furnlllhmg thereof IS not, and under no cIrcumstances 15 to be construed as, a representa tlOn by Walston & Co, Inc All expressions of opinion are subJect to change Without notice. Walston & Co. Inc, and Officers, Directors, Stockholders and Employees thereof, purchase, sell and may have an interest In the securities mentioned herem ThiS market letter IS mtended and presented merely as n general, informal commentary on day to day market neW!! not as a complete analYSIS Addlttonal Information With respect to any securities referred to herem will be utJon – 301