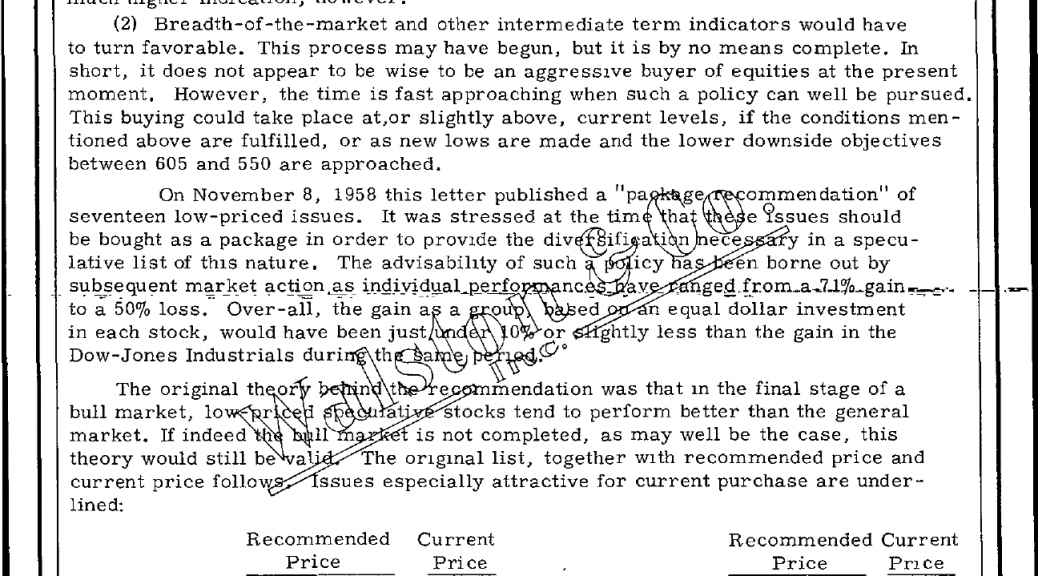 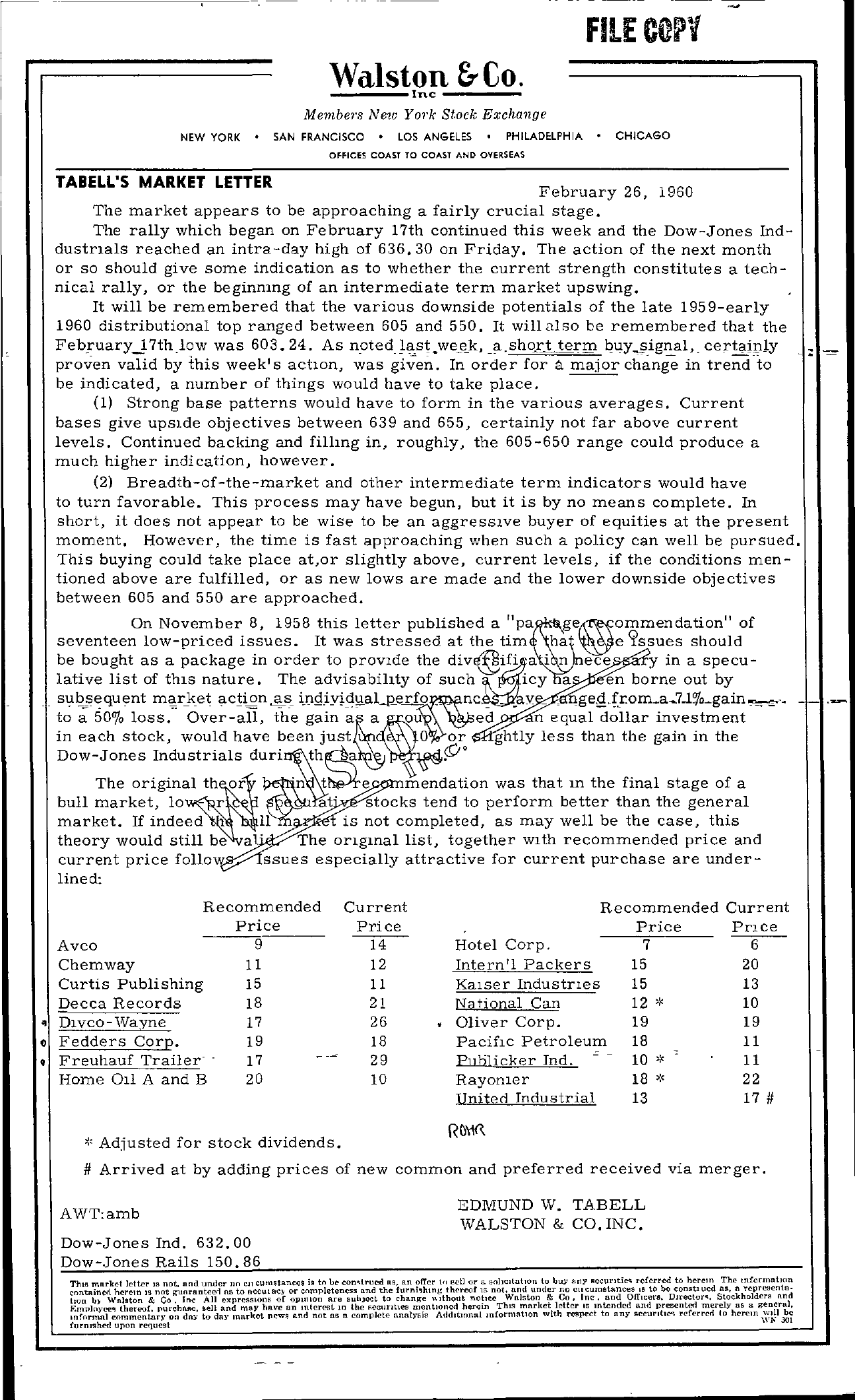 —————–,——- —- FILE COpy Walston &Co. lnc – – – – – M embe8 New Y O'k Stock Exchange NEW YORK SAN FRANCISCO LOS ANGELES PHILADELPHIA OFFICES COAST TO COAST AND OVERSEAS CHICAGO TABEll'S MARKET lETTER February 26, 1960 The market appears to be approaching a fairly crucial stage. The rally which began on February 17th continued this week and the Dow-Jones Inddustnals reached an intra-day high of 636.30 on Friday. The action of the next month or so should give some indication as to whether the current strength constitutes a technical rally, or the beginmng of an intermediate term market upswing. It will be remembered that the various downside potentials of the late 1959-early 1960 distributional top ranged between 605 and 550. It will also be remembered that the February.17th)ow was 603.24. As noted lasLweek, a ,shoIt term buy,.,signal certaiDly proven valid by this week's actlOn, was given. In order for a major change in trend to be indicated, a number of things would have to take place. (1) Strong base patterns would have to form in the various averages. Current bases give upslde objectives between 639 and 655, certainly not far above current levels. Continued backing and fillmg in, roughly, the 605-650 range could produce a much higher indication, however. (2) Breadth-of-the-market and other intermediate term indicators would have to turn favorable. This process may have begun, but it is by no means complete. In short, it does not appear to be wise to be an aggresslve buyer of equities at the present moment. However, the time is fast approaching when such a policy can well be pursued. This buying could take place at,or slightly above, current levels, if the conditions men- tioned above are fulfilled, or as new lows are made and the lower downside objectives between 605 and 550 are approached. On November 8, 1958 this letter published a seventeen low-priced issues. It was stressed at the tim ha of issues should be bought as a package in order to provlde the a i n ece y in a specu- lative list of thlS nature. The advisabillty of such icy a en borne out by ac!ion4s nc, . v ,geg.rr.oma7.1')Lgain ' to a 50 loss. Over-all, the gain in each stock, would have been just ed n equal dollar investment 0 or ghtly less than the gain in the Dow-Jones Industrials '. The original th or bull market, 10 market. If indeed theory would still be current price follow lined !if;n mendation was that m the final stage of a at' stocks tend to perform better than the general 11 is not completed, as may well be the case, this The ongmal list, together vnth recommended price and ssues especially attractive for current purchase are under- Recommended Price Avco 9 Chemway 11 Curtis Publishing 15 Decca Records D1VCO- Wayne 0 Fedders Corp. Freuhauf TrailerHome 011 A and B 18 17 19 17 20 Current Price 14 12 11 21 26 18 29 10 Recommended Current Price Pnce Hotel Corp, 7 6 Intern'l Packers 15 20 Kaiser Industnes 15 13 National Can Oliver Corp. Pacific Petroleum 12 19 18 10 19 11 E1Jlijicker Ind, 10 11 Rayomer 18 22 Uniterl Industrial 13 17 Adjusted for stock dividends. RIM(/.. Arrived at by adding prices of new common and preferred received via merger. AWTamb Dow-Jones Ind, 632.00 Dow-Jones Rails 150.86 EDMUND W. TABELL WALSTON & CO. INC. Thlfl market letter lS not, nnd under lHl ell cumstances is tn be conlrucd ne, nn offer in sell or n snbcltntlOn to buy flny Bccurltie; referred to herem The mformntlOn contained herem lS not Ituflrnnteeil as to OCCUtflC\' or completeness and the th'rcof IS not, and under no CHcumstances LS to be constI ued as, n -representa- hon b,. \\fnJeton & Co, Inc All expreSSIOns of opinIOn are suh)ect to change \\Lthout nO!lCe Walston & Co, Inc, and OffLcers. Dlrector'l, Sto(kholders nnd Emplo),!!Cq thereof, Il\Lrchnflc, sell and maY have an mterest 111 the F;ecurLtIes mo;ntLOncd herem ThLs market,letter L5 Intended and presented merely as a general, mformal eomment.nr) on day to day mnrket news and not as a complete nnah'SL!! AddItional mformntlon with respect to any secUl'Itle-; referren to herem furnIshed upon request