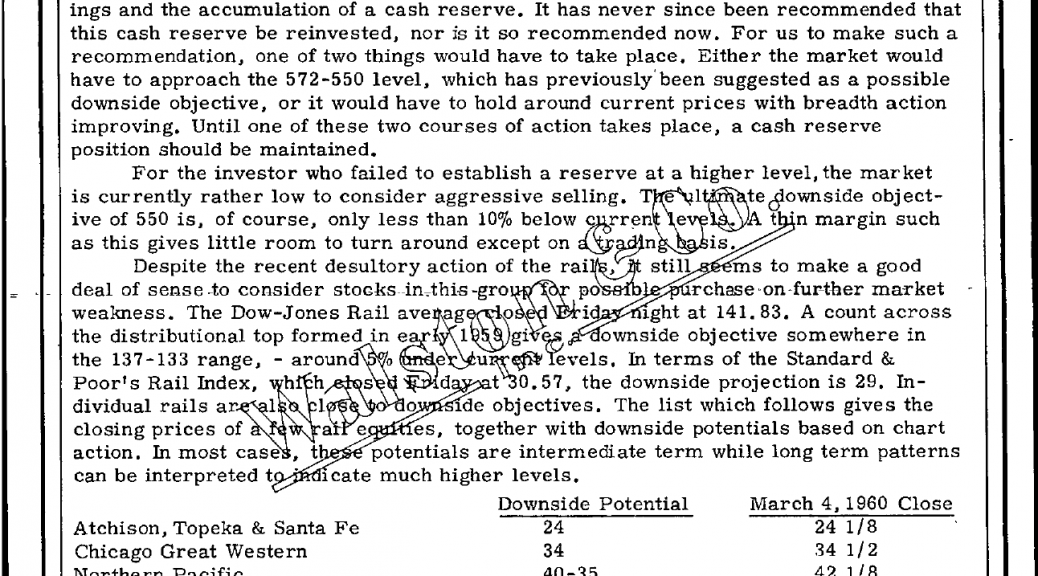 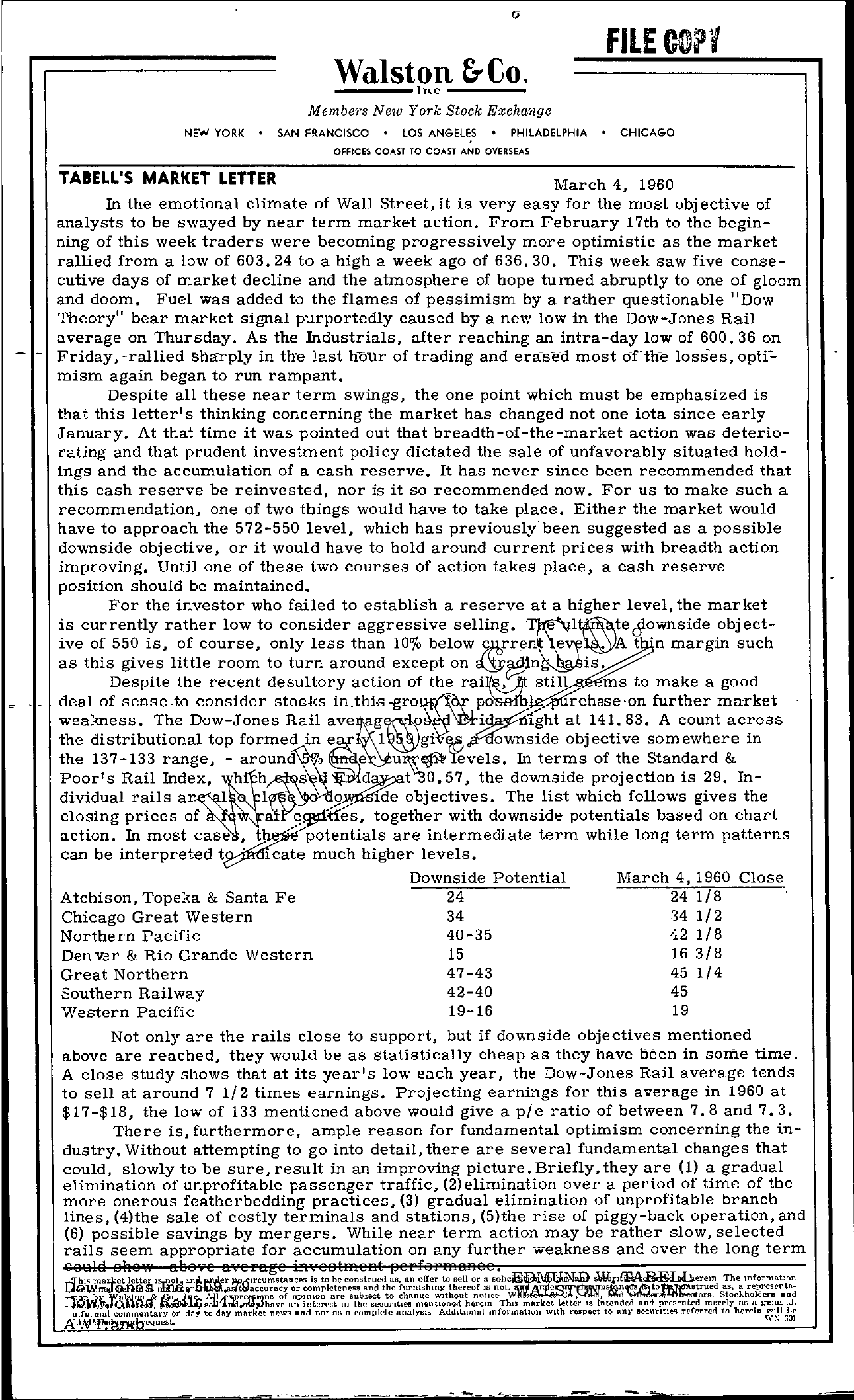 o Walston &CO. Inc Members New Y01'k Stock Exchange FILE C1 NEW YORK SAN FRANCISCO LOS ANGELES PHILADELPHIA CHICAGO OFFICES COAST TO COAST AND OVERSEAS TABELL'S MARKET LETTER March 4, 1960 In the emotional climate of Wall Street, it is very easy for the most obj ective of analysts to be swayed by near term market action. From February 17th to the begin- ning of this week traders were becoming progressively more optimistic as the market rallied from a low of 603.24 to a high a week ago of 636.30. This week saw five conse- cutive days of market decline and the atmosphere of hope turned abruptly to one of gloom and doom. Fuel was added to the flames of pessimism by a rather questionable Dow Theory bear market signal purportedly caused by a new low in the Dow-Jones Rail average on Thursday. As the Industrials, after reaching an intra-day low of 600.36 on – Friday, -rallied sharply in th-e last h-our of trading and era-sed most 6fth-e loss-es, opti. mism again began to run rampant. Despite all these near term swings, the one point which must be emphasized is that this letter's thinking concerning the market has changed not one iota since early January. At that time it was pointed out that breadth-of-the-market action was deterio- rating and that prudent investment policy dictated the sale of unfavorably situated hold- ings and the accumulation of a cash reserve. It has never since been recommended that this cash reserve be reinvested, nor is it so recommended now. For us to make such a recommendation, one of two things would have to take place. Either the market would have to approach the 572-550 level, which has previously'been suggested as a possible downside objective, or it would have to hold around current prices with breadth action improving. Until one of these two courses of action takes place, a cash reserve position should be maintained. For the investor who failed to establish a reserve at a higher level, the market is currently rather low to consider aggressive selling. object- ive of 550 is, of course, only less than 10 below 7Jt,rren e t 'n margin such as this gives little room to turn around except on is. Despite the recent desultory action of the still ms to make a good . deal of seRse -to consider ,- -rchase on-fur-tber market – weakness. The Dow-Jones Rail id 19ht at 141. 83. A count across the distributional top formed in W', ownside objective somewhere in the 137-133 range, – e In terms of the Standard & Poor's Rail h d Lt30. 57, the downside projection is 29. In- dividual rails ar. I 1 0 ide objectives. The list which follows gives the closing prices of a e es, together with downside potentials based on chart action. In most case , t potentials are intermediate term while long term patterns can be interpreted t' lcate much higher levels. Atchison, Topeka & Santa Fe Chicago Great Western Northern Pacific Den var & Rio Grande Western Great Northern Southern Railway Western Pacific Downside Potential 24 34 40-35 15 47-43 42-40 19-16 March 4, 1960 Close 24 1/8 34 1/2 42 1/8 16 3/8 45 1/4 45 19 Not only are the rails close to support, but if dOViTIside objectives mentioned above are reached, they would be as statistically cheap as they have been in some time. A close study shows that at its year's low each year, the Dow-Jones Rail average tends to sell at around 7 1/2 times earnings. Projecting earnings for this average in 1960 at 17 -18, the low of 133 mentioned above would give a p/ e ratio of between 7. 8 and 7. 3. There is, furthermore, ample reason for fundamental optimism concerning the in- dustry. Without attempting to go into detail, there are several fundamental changes that could, slowly to be sure,result in an improving picture. Briefly, they are (1) a gradual elimination of unprofitable passenger traffic, (2) elimination over a period of time of the more onerous featherbedding practices, (3) gradual elimination of unprofitable branch lines, (4)the sale of costly terminals and stations, (5)the rise of piggy-back operation, and (6) possible savings by mergers. While near term action may be rather slow, selected rails seem appropriate for accumulation on any further weakness and over the long term Qsule sHe,.-, 813979 ever age is; estHleH.t f3erfepffi8Flee. rihl; mnct letter lSrl)21innJi. WlJler /I,nlrcumstances is to be construed us, an offer to sell or n The Informatlon UOWm.d&nIilS or completeness and the iurnlshmp thereof IS a.s, a reprC'lenta. nlAll.by lJ.lWQll..& 13P… J,;.. of opinIon a.re subJect to chllllpe WIthout notice htd Stockholders and U1J,.WtlJlJUntM;j. an interest 10 the secUTItleS mentIOned hClr.1Il ThiS market letter IS intended and present.ed merely as Il gencrlli, IIlforma.I. on nay to day markd news and not as a complete nnalysls Additional IIlfOrmatlOll With respect to any secuTities referred to herein will be WN 301