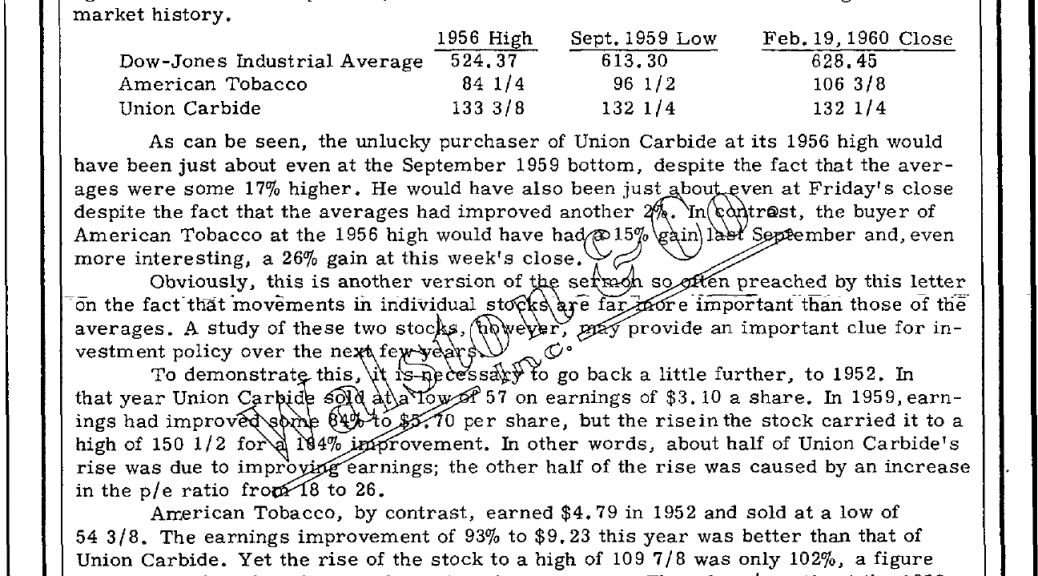 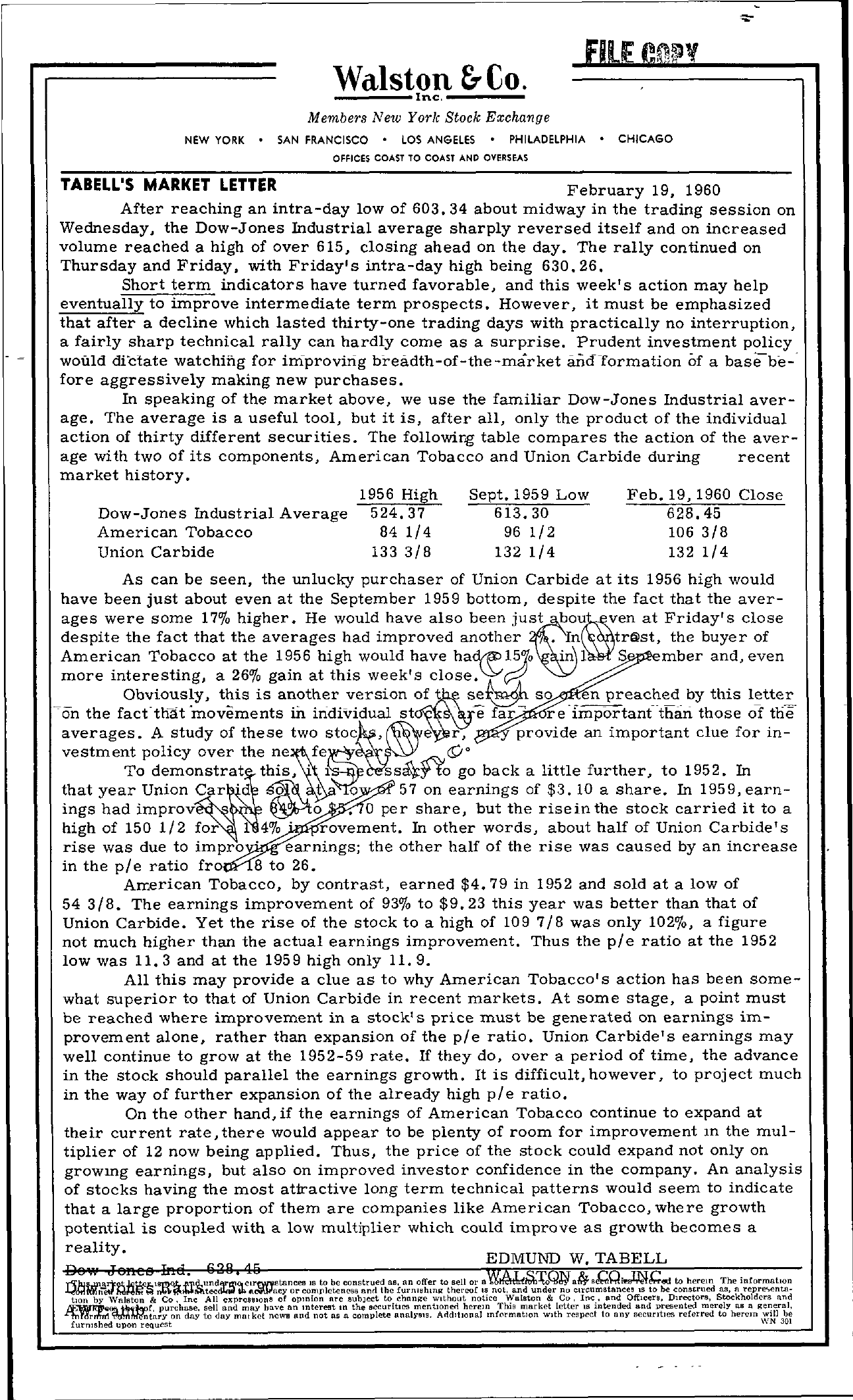 Walston &Co. Inc. Members New Yorle Stocle Exchange NEW YORK SAN FRANCISCO LOS ANGELES PHILADELPHIA CHICAGO OFFICES COAST TO COAST AND OVERSEAS TABELL'S MARKET LETTER February 19, 1960 After reaching an intra-day low of 603.34 about midway in the trading session on Wednesday, the Dow-Jones Industrial average sharply reversed itself and on increased volume reached a high of over 615, closing ahead on the day. The rally continued on Thursday and Friday, with Friday's intra-day high being 630.26. Short term indicators have turned favorable, and this week's action may help eventually to improve intermediate term prospects. However, it must be emphasized that after a decline which lasted thirty-one trading days with practically no interruption, a fairly sharp technical rally can hardly come as a surprise. Prudent investment policy would di'ctate watching for improving breadth-of-the-market aiicfTormation of a basebe- fore aggressively making new purchases. In speaking of the market above, we use the familiar Dow-Jones Industrial aver- age. The average is a useful tool, but it is, after all, only the product of the individual action of thirty different securities. The followirg table compares the action of the aver- age with two of its components, American Tobacco and Union Carbide during recent market history. 1956 High Sept. 1959 Low Feb. 19, 1960 Close Dow-Jones Industrial Average 524.37 613.30 628.45 American Tobacco 84 1/4 96 1/2 106 3/8 Union Carbide 1333/8 132 1/4 132 1/4 As can be seen, the unlucky purchaser of Union Carbide at its 1956 high would have been just about even at the September 1959 bottom, despite the fact that the aver- ages were some 17 higher. He would have also been en at Friday's close despite the fact that the averages had improved another . in tr9lst, the buyer of American Tobacco at the 1956 high would have in 1 S mber and, even more interesting, a 26 gain at this week's close.\.Yv Obviously, this is another version the facfth-at movements in individual st so en by this e- far re important thari those of the averages. A study of these two r, provide an important clue for in- vestment policy over the To demonstrat this, 0 I cPo go back a little further, to 1952. In that year Union Car d 0 57 on earnings of 3.10 a share. In 1959,earn- ings had improv 0 per share, but the risein the stock carried it to a high of 150 1/2 for 1 4 0 rovement. In other words, about half of Union Carbide's rise was due to impro 0 earnings; the other half of the rise was caused by an increase in the p/ e ratio fro 8 to 26. Anerican Tobacco, by contrast, earned 4.79 in 1952 and sold at a low of 54 3/8. The earnings improvement of 93 to 9.23 this year was better than that of Union Carbide. Yet the rise of the stock to a high of 109 7/8 was only 102, a figure not much higher than the actual earnings improvement. Thus the p/ e ratio at the 1952 low was 11. 3 and at the 1959 high only 11. 9. All this may provide a clue as to why American Tobacco's action has been some- what superior to that of Union Carbide in recent markets. At some stage, a point must be reached where improvement in a stock's price must be generated on earnings im- provement alone, rather than expansion of the pie ratio. Union Carbide's earnings may well continue to grow at the 1952-59 rate. If they do, over a period of time, the advance in the stock should parallel the earnings growth. It is difficult, however, to project much in the way of further expansion of the already high pie ratio. On the other hand, if the earnings of American Tobacco continue to expand at their current rate, there would appear to be plenty of room for improvement m the mul- tiplier of 12 now being applied. Thus, the price of the stock could expand not only on growmg earnings, but also on improved investor confidence in the company. An analysis of stocks having the most at1ractive long term technical patterns would seem to indicate that a large proportion of them are companies like American Tobacco, where growth potential is coupled with a low multiplier which could improve as growth becomes a reality. EDMUND W. TABELL IS to be construed us, nn offer to sell or a to herein The informatIon MMfR Q rJill'f\ffi,tla'ti.tecdlali' .cYtWacy or complcten(!8S anrl the furnlshllll/ thereof IS not, and under no circumstances IS to be construed as, a l'epre.enta- twn by \Vnlston & Co Inc All sell ex nn pressIonS d mny ha of ve OPInion nn mtere nr st es In ubJect the sec to chn urities nge men tWiointheno.uht enroetmic e T Wa his lston mark & et Co, Inc, and Officers, DIrectors, Stockholdcrs and letter IS intended and presented merely as a genera, on dny to dny mat ket news lind not as a complete analYSIS. ArI(litlOnnl mformatlon With respect to any securIties referred to herem will be furn1shed upon request WN 301