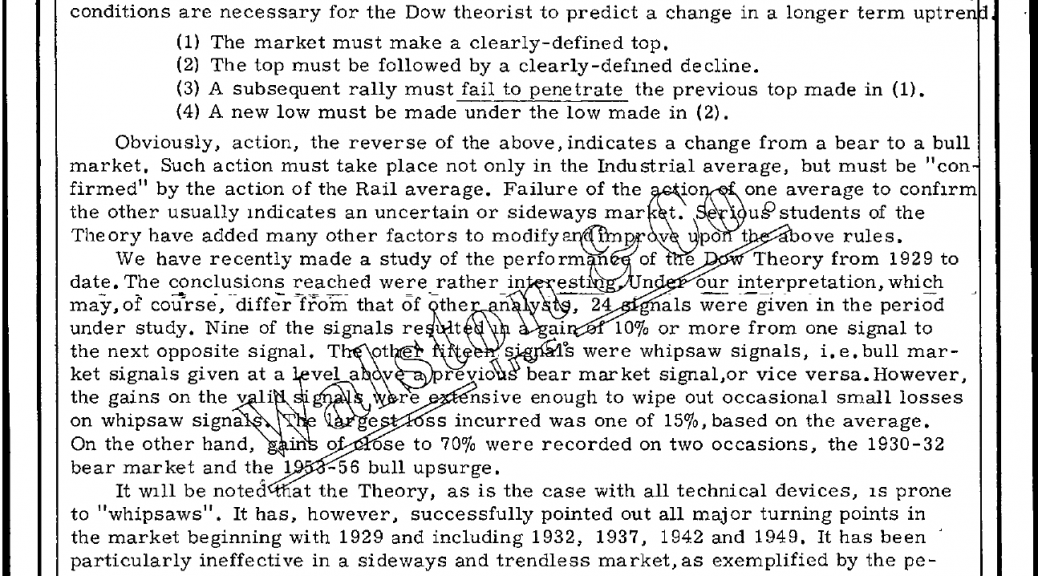 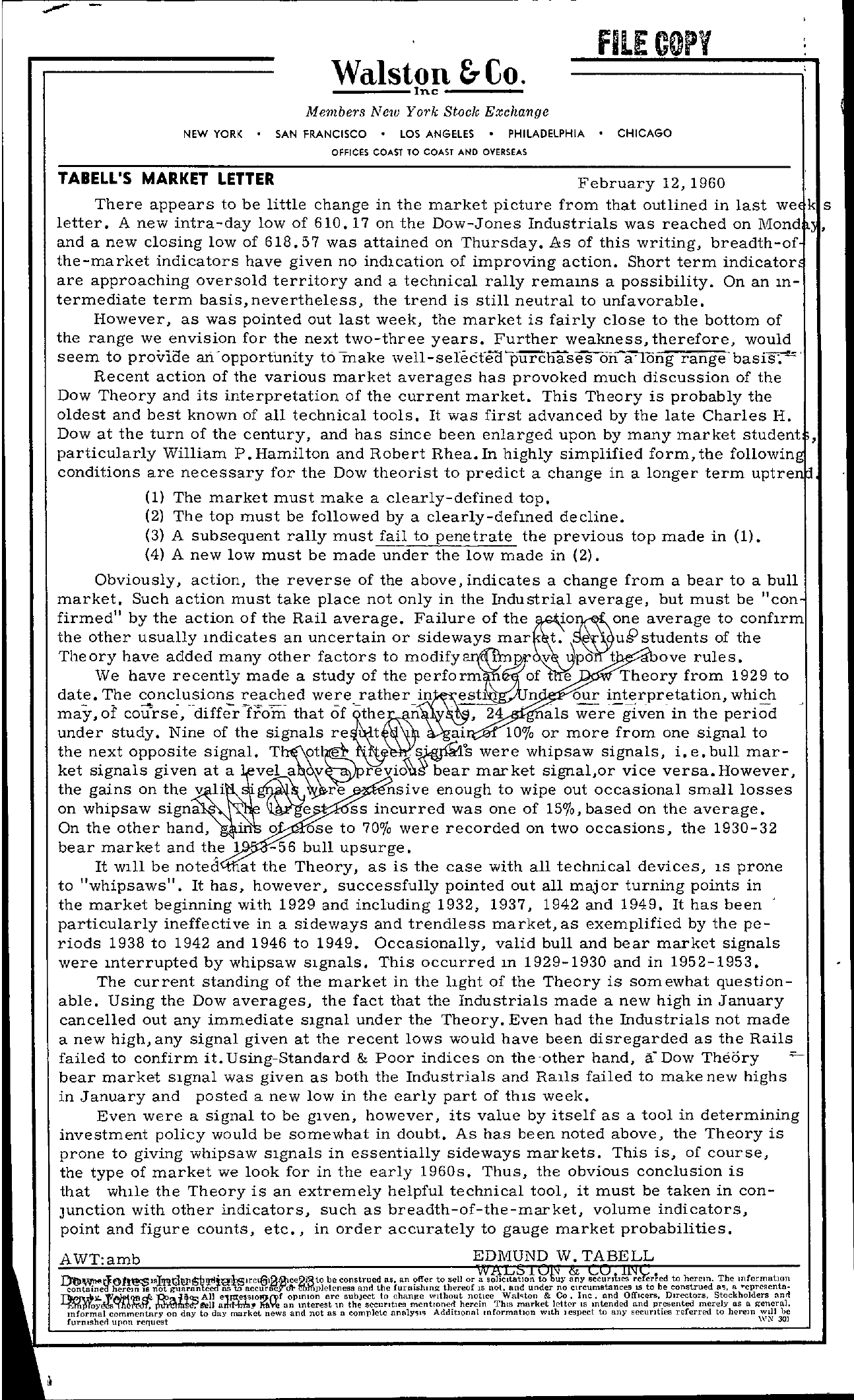 Walston &Co. Inc – – – – – FILE 111embers New Yo,-k Stacie Exc/wnge NEW YORK SAN FRANCISCO LOS ANGELES PHILADELPHIA CHICAGO OFFICES COAST TO COAST AND OVERSEAS TABEll'S MARKET lETTER February 12, 1960 There appears to be little change in the market picture from that outlined in last s letter. A new intra-day low of 610.17 on the Dow-Jones Industrials was reached on 1I''''''1'-J1' and a new closing low of 618.57 was attained on Thursday. As of this writing, breadth- the-market indicators have given no indlcation of improving action. Short term indicator are approaching oversold territory and a technical rally remams a possibility. On an m- termediate term basis,nevertheless, the trend is still neutral to unfavorable. However, as was pOinted out last week, the market is fairly close to the bottom of the range we envision for the next two-three years. Further weakness, therefore, would seem to provide an' opportunity to make well- selecfecI 1iU'rCliasesorCi'Tong range' basis; Recent action of the various market averages has provoked much discussion of the Dow Theory and its interpretation of the current market. This Theory is probably the oldest and best known of all technical tools. It was first advanced by the late Charles H. Dow at the turn of the century, and has since been enlarged upon by many market student particularly William P. Hamilton and Robert Rhea. In highly Simplified form, the conditions are necessary for the Dow theorist to predict a change in a longer term llD,trenll (1) The market must make a clearly-defined top. (2) The top must be followed by a clearly-defmed decline. (3) A subsequent rally must fail to penetrate the previous top made in (1). (4) A new low must be made under the low made in (2). Obviously, action, the reverse of the above, indicates a change from a bear to a bull market. Such action must take place not only in the Industrial average, but must be con firmed by the action of the Rail average. Failure of the average to the other usually mdicates an uncertain or sideways mar t. us' students of the Theory have added many other factors to v po t ove rules. We have recently made a study of the perform n of e Theory from 1929 to date. T,he -e.ached wererather est! n. which may, of cou-rse, differ-from that of 24 . nals were given in the period under study. Nine of the signals re t ai 10 or more from one signal to the next opposite signal. fi .sjq;jtM'S were whipsaw signals, i. e. bull mar- ket signals given at a vel a bear mar ket signal,or vice versa. However, ;CUJiethe gains on the v li – on whipsaw signa . re nsive enough to wipe out occasional small losses ss incurred was one of 15, based on the average. On the other hand, 0 ose to 70 were recorded on two occasions, the 1930-32 bear market and the -56 bull upsurge. It wl11 be noted at the Theory, as is the case with all technical devices, lS prone to whipsaws. It has, however, successfully pOinted out all major turning points in the market beginning with 1929 and including 1932, 1937, 1942 and 1949. It has been' particularly ineffective in a sideways and trendless market, as exemplified by the pe- riods 1938 to 1942 and 1946 to 1949. Occasionally, valid bull and bear market signals were mterrupted by whipsaw slgnals. This occurred m 1929-1930 and in 1952-1953. The current standing of the market in the hght of the Theory is somewhat question- able. Using the Dow averages, the fact that the Industrials made a new high in January cancelled out any immediate slgnal under the Theory. Even had the Industrials not made a new high, any signal given at the recent lows would have been disregarded as the Rails failed to confirm it. USing-Standard & Poor indices on the -other Dow Theory .0- bear market slgnal was given as both the Industrials and Ralls failed to make new highs in January and posted a new low in the early part of thlS week. Even were a signal to be glven, however, its value by itself as a tool in determining investment policy would be somewhat in doubt. As has been noted above, the Theory is prone to giving whipsaw slgnals in essentially sideways markets. This is, of course, the type of market we look for in the early 1960s. Thus, the obvious conclusion is that whl1e the Theory is an extremely helpful technical tool, it must be taken in con- Junction with other indicators, such as breadth-of-the-market, volume indicators, pOint and figure counts, etc., in order accurately to gauge market probabilities. AWTamb . EDMUND W. VVALStOrJ & TcAolBmE\L…L-. be construed ns, an offc! to sell or a ObCltatlOn to Eu), any sccurl les rererred to herem. The mformatIon contained lierem IS t'iJh'ivletencs9 anli the CurnishIn.t thereof IS not. and under no Clrl!umstanl!es 15 to be construed n';, a cpresenta- 'Ql'.llij,Qo!.All opmlOn arc subJcct to chanve Without notice Wal'lton & Co. Inc. ond Officers, Directors, Stockholders anr! !faYe an Intercst m the securltlcs mentioned herein ThiS market letter IS mtended and pr.esented merely as a general. mformal commentary on dllY to day market news and not as a I!omplctc nnnlY';I'; AdditIOnal mformatlOn With I espcct to any securities referred to herem Will he furnisher! upon request \\TN 301