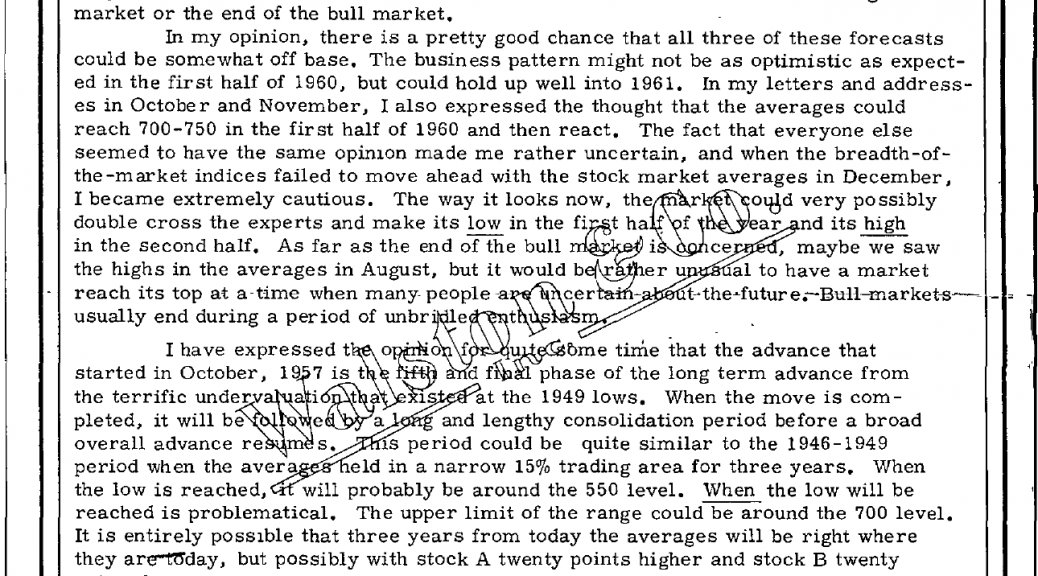 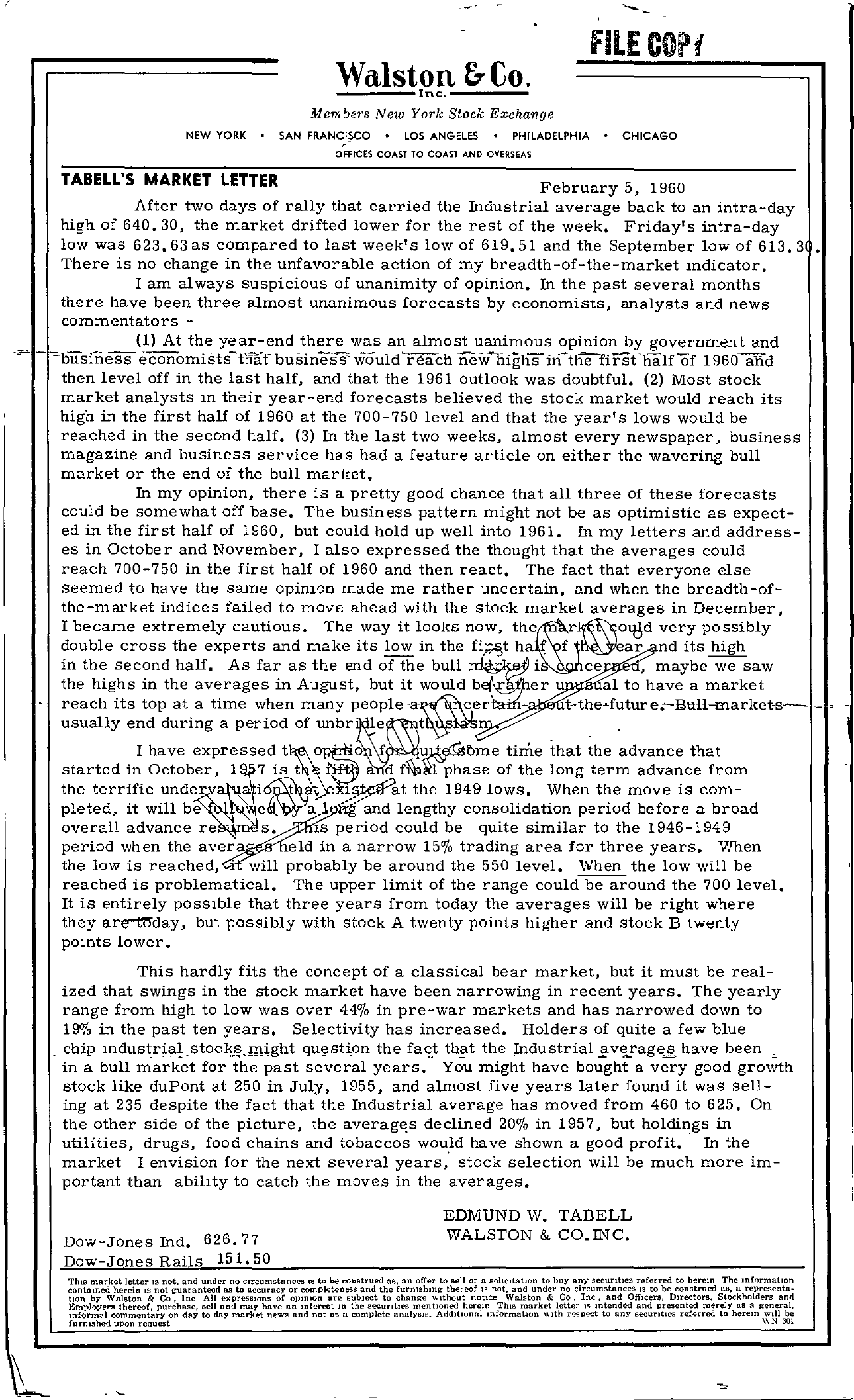 I Walston &Co. Inc. Mernbe,'s New York Stock Exchange fiLE COPt NEW YORK SAN LOS ANGELES PHILADELPHIA CHICAGO OFFICES COAST TO COAST AND OVERSEAS TABEll'S MARKET lETTER February 5, 1960 After two days of rally that carried the Industrial average back to an intra-day high of 640.30, the market drifted lower for the rest of the week. Friday's intra-day low was 623.63 as compared to last week's low of 619.51 and the September low of 613.3 There is no change in the unfavorable action of my breadth-of-the-market mdicator. I am always suspicious of unanimity of opinion. In the past several months there have been three almost unanimous forecasts by economists, analysts and news commentators – (1) At the year-end there was an almost uanimous opinion by government and econorriists-tlllif busineil'S- would reach nevni.ighsiIi-the first -halfof 1960 and then level off in the last half, and that the 1961 outlook was doubtful. (2) Most stock market analysts m their year-end forecasts believed the stock market would reach its high in the first half of 1960 at the 700-750 level and that the year's lows would be reached in the second half. (3) In the last two weeks, almost every newspaper, business magazine and business service has had a feature article on either the wavering bull market or the end of the bull market. In my opinion, there is a pretty good chance that all three of these forecasts could be somewhat off base. The business pattern might not be as optimistic as expect- ed in the first half of 1960, but could hold up well into 1961. In my letters and address- es in Octobe r and November, I also expressed the thought that the averages could reach 700-750 in the first half of 1960 and then react. The fact that everyone else seemed to have the same opimon made me rather uncertain, and when the breadth-of- the-market indices failed to move ahead with the stock market averages in December, I became extremely cautious. The way it looks now, very pOSSibly double cross the experts and make its low in the in the second half. As far as the end of the bull t ha f i ce its high ,maybe we saw the highs in the averages in August, but it would u al to have a market reach its top at a-time when many people -, usually end during a period of . I have expressed started in October, 19,.7 is t f . ad time that the advance that of the long term advance from the terrific 1S at the 1949 lows. When the move is com- pleted, it will be ekWa and lengthy consolidation period before a broad overall advance s. 1S period could be quite similar to the 1946-1949 period when the neld in a narrow 15 trading area for three years. When the low is reached, itwill probably be around the 550 level. When the low will be reached is problematical. The upper limit of the range could be around the 700 level. It is entirely poss1ble that three years from today the averages will be right where they a re-m'day, but possibly with stock A twenty points higher and stock B twenty points lower. This hardly fits the concept of a classical bear market, but it must be real- ized that swings in the stock market have been narrowing in recent years. The yearly range from high to low was over 44 in pre-war markets and has narrowed down to 19 in the past ten years. Selectivity has increased. Holders of quite a few blue chip question the been in a bull market for the past several years. You might have bought a very good growth stock like duPont at 250 in July, 1955, and almost five years later found it was sell- ing at 235 despite the fact that the Industrial average has moved from 460 to 625. On the other side of the picture, the declined 20 in 1957, but in utilities, drugs, food chains and tobaccos would have shown a good profit. In the market I envision for the next several years, stock selection will be much more im- portant than abihty to catch the moves in the averages. Dow-Jones Ind. 626.77 Dow-JonesRails 151.50 EDMUND W. TABELL WALSTON & CO. INC. This market letter IS not, and under no circumstances IS to be construl!'d tIS, an offer to sell or n soliCItatIOn to buy ll!'-Y secuntles referred to herem The mfl)rmatlOn con tamed herein IS not guaranteed as to aCCUfllCY or completeness and the furmshmg thereof Iq not, and under no Circumstances 19 to be construed 1l5, Il representa- tion by Walaton & Co, Inc All expreSSlOns of opinion are subject to change \\.lthout notice Walston & Co. Inc. and Officers. Directors. Stockholders and Employees thereof, purchase, sell nnd may have an Interest In the securities mentioned herem This market letter 1; Intended and presented merely as a general, mformal commentary on day to day market news and not as a complete analYSIS. Additional mformatlOn Ith respect to any securities referred to herem will be furmshed upon request \\)j 301