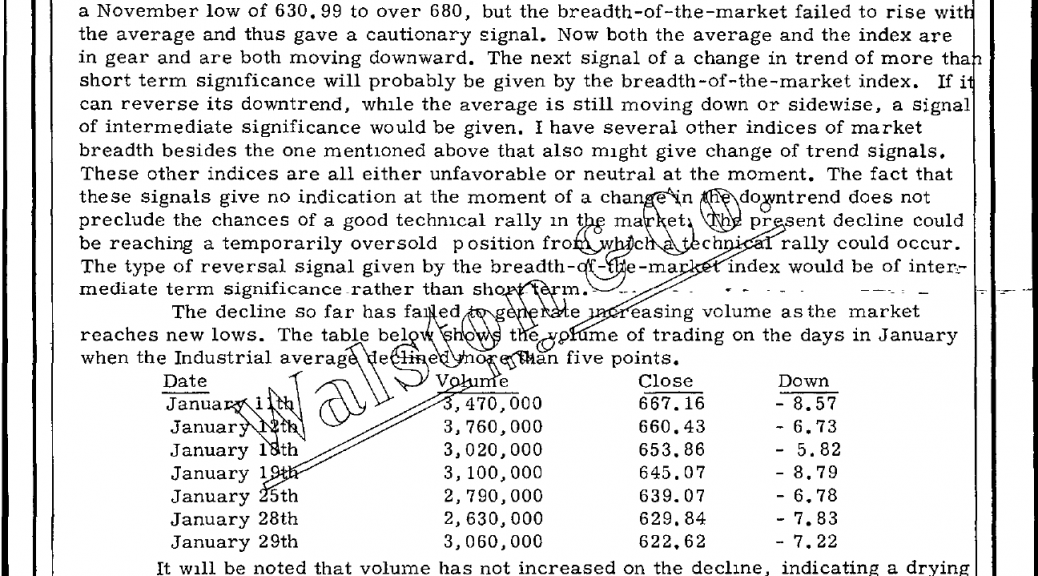 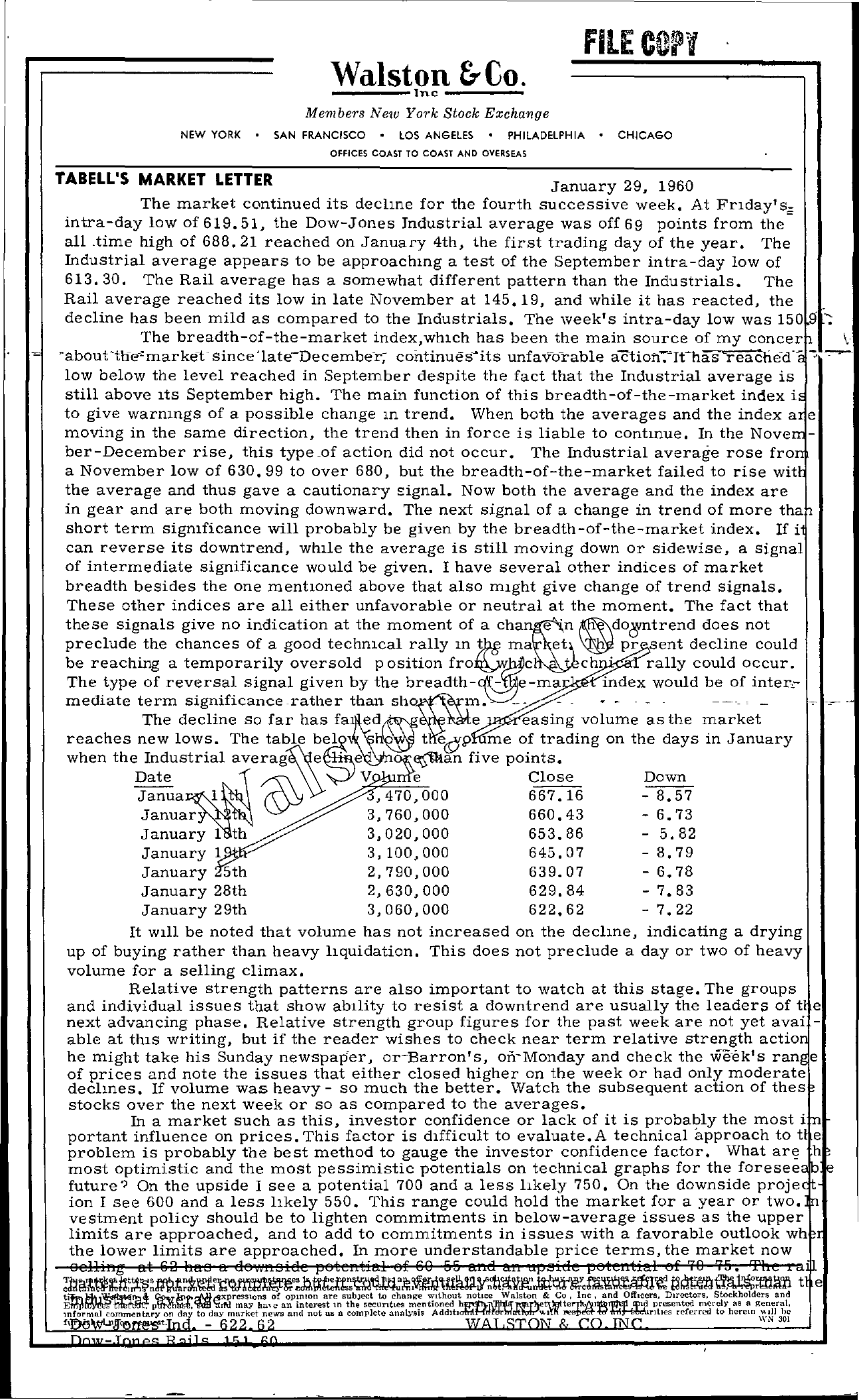 fiLE COpy Walston &Co. Members New York Stock Exchange NEW YORK SAN FRANCISCO LOS ANGELES PHILADElPHIA CHICAGO OFFICES COAST TO COAST AND OVERSEAS TABELL'S MARKET LETTER January 29, 1960 The market continued its declme for the fourth successive week. At Fnday'se intra-day low of 619. 51, the Dow-Jones Industrial average was off 69 points from the- all ,time high of 688.21 reached on January 4th, the first trading day of the year. The Industrial average appears to be approachmg a test of the September intra-day low of 613.30. The Rail average has a somewhat different pattern than the Industrials. The Rail average reached its low in late November at 145.19, and while it has reacted, the decline has been mild as compared to the Industrials. The week's intra-day low was 1509 ' The breadth-of-the-market index,whlch has been the main source of my concer I.' about-tlfemarket' since'late-Decembe'r; unfav'orable actioh'IChas reached'- ) low below the level reached in September despite the fact that the Industrial average is still above Its September high. The main function of this breadth-of-the-market index i to give warmngs of a possible change m trend. When both the averages and the index a moving in the same direction, the trend then in force is liable to contmue. In the Nove ber-December rise, this typeDf action did not occur. The Industrial average rose fro a November low of 630.99 to over 680, but the breadth-of-the-market failed to rise wit the average and thus gave a cautionary signal. Now both the average and the index are in gear and are both moving downward. The next signal of a change in trend of more tha short term sigmficance will probably be given by the breadth-of-the-market index. If i can reverse its downtrend, whIle the average is still moving down or sidewise, a signal of intermediate significance would be given. I have several other indices of market breadth besides the one mentlOned above that also mIght give change of trend signals. These other indices are all either unfavorable or neutral at the moment. The fact that these signals give no indication at the moment of a chans'n does not preclude the chances of a good techmcal rally m rna et pr sent decline could be reaching a temporarily oversold p osition eh' rally could occur. The type of reversal signal given by the breadth- – e-ma index would be of inter,- mediate reaches new lows. The table when the Industrial – – ,. me of trading on the days in January five pOints. Januar January 1 th January 1 V 3,760,000 3,020,000 3,100,000 660.43 653.86 645.07 6.73 5.82 8.79 January 5th January 28th January 29th 2,790,000 2,630,000 3,060,000 639.07 629.84 622.62 6.78 7.83 7.22 It WIll be noted that volume has not increased on the declme, indicating a drying up of buying rather than heavy llquidation. This does not preclude a day or two of heavy volume for a selling climax. Relative strength patterns are also important to watch at this stage. The groups and individual issues that show abIlity to resist a downtrend are usually the leaders of t e next advancing phase. Relative strength group figures for the past week are not yet avai – able at thIS writing, but if the reader wishes to check near term relative strength actio he might take his Sunday newspaper, or-Barron's, on-Monday and check the week's ran e of prices and note the issues that either closed higher on the week or had only moderate declmes. If volume was heavy – so much the better. Watch the subsequent action of thes stocks over the next week or so as compared to the averages. In a market such as this, investor confidence or lack of it is probably the most i portant influence on prices. This factor is dIfficult to evaluate.A technical approach to t e problem is probably the best method to gauge the investor confidence factor. What h most optimistic and the most pessimistic potentials on technical graphs for the foresee future On the upside I see a potential 700 and a less llkely 750. On the downside proje ion I see 600 and a less llkely 550. This range could hold the market for a year or two. vestment policy should be to lighten commitments in below-average issues as the upper limits are approached, and to add to commitments in issues with a favorable outlook wh the lower limits are approached. In more understandable price terms, the market now selliflg at eg has B de ovflsiae 56tential 6 68 65 ana ali ap!ieie 156tcntiai of 1'8 1'5. ry'he 1 a t tiflt, of OPinIOn are subJect to chanKe Without nollce Wnlswn & Co, Inc, and Officers, Directors, Stockholders and may hu\c an interest In the securities mentioned presented merely as n general, oemformnl commentary on clay to clay mtlrket news and not as n complete analysis Addlbatr.4.Hri-fe/rhinltlior'…. ltH f\f)O t. referred to herein ''.Ill he \\ N 301 e