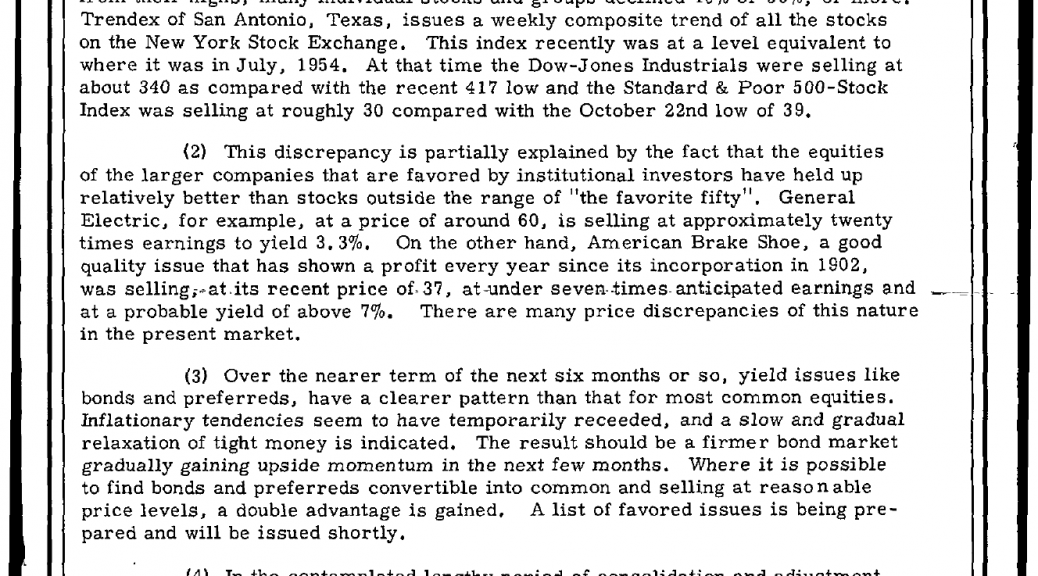 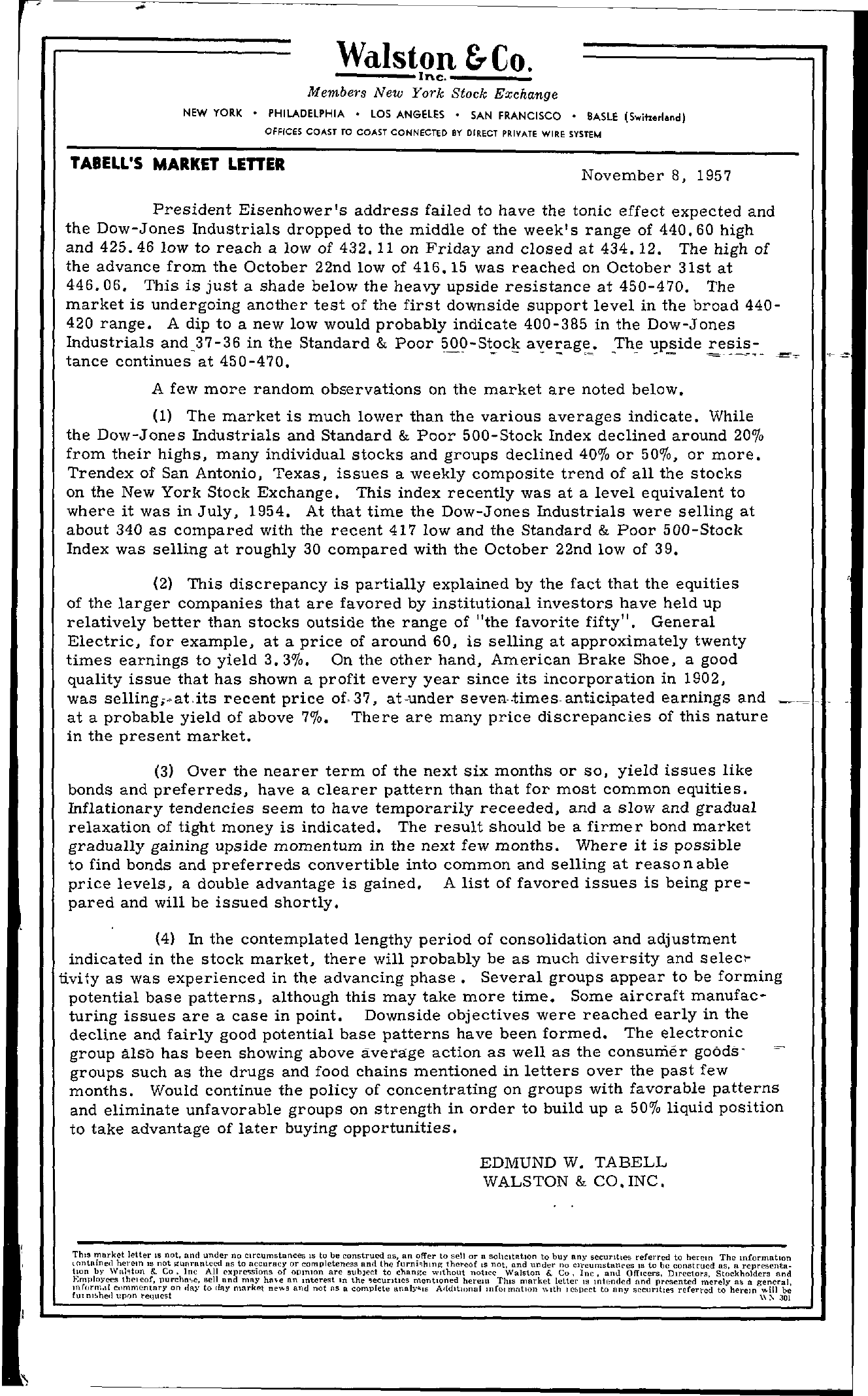 &Co.Walston—-Inc. Members New York Stock Exchange NEW YORK PHILADELPHIA lOS ANGELES SAN FRANCISCO BASlE (Swaml.nd) OFFices COAST TO COAST CONNECTED BY DIRECT PRIVATE WIRE SYSTEM TABEll'S MARKET lEnER November 8, 1957 President Eisenhower's address failed to have the tonic effect expected and the Dow-Jones Industrials dropped to the middle of the week's range of 440.60 high and 425.46 low to reach a low of 432.11 on Friday and closed at 434.12. The high of the advance from the October 22nd low of 416.15 was reached on October 31st at 446.06. This is just a shade below the heavy upside resistance at 450-470. The market is undergoing another test of the first downside support level in the broad 440- 420 range. A dip to a new low would probably indicate 400-385 in the Dow-Jones Industrials and 37-36 in the Standard & Poor 500-Stock average. tance continues at 4 5 0 – 4 7 0 . – – – – . – The upside .- res.is-.- A few more random observations on the market are noted below. (1) The market is much lower than the various averages indicate. While the Dow-Jones Industrials and Standard & Poor 500-Stock Index declined around 20 from their highs, many individual stocks and groups declined 40 or 50, or more. Trendex of San Antonio, Texas, issues a weekly composite trend of all the stocks on the New York Stock Exchange. This index recently was at a level equivalent to where it was in July, 1954. At that time the Dow-Jones Industrials were selling at about 340 as compared with the recent 417 low and the Standard & Poor 500-Stock Index was selling at roughly 30 compared with the October 22nd low of 39. (2) This discrepancy is partially explained by the fact that the equities of the larger companies that are favored by institutional investors have held up relatively better than stocks outside the range of the favorite fifty. General Electric, for example, at a price of around 60, is selling at approximately twenty times earnings to yield 3.3. On the other hand, American Brake Shoe, a good quality issue that has shown a profit every year since its incorporation in 1902, was sellingi,at.its recent price of, 37, at-under seven-times anticipated earnings and at a probable yield of above 7. There are many price discrepancies of this nature in the present market. (3) Over the nearer term of the next six months or so, yield issues like bonds and preferreds, have a clearer pattern than that for most common equities. Inflationary tendencies seem to have temporarily receeded, and a slow and gradual relaxation of tight money is indicated. The result should be a firmer bond market gradually gaining upside momentum in the next few months. Where it is possible to find bonds and preferreds convertible into common and selling at reaso n able price levels, a double advantage is gained. A list of favored issues is being pre- pared and will be issued shortly. (4) In the contemplated lengthy period of consolidation and adjustment indicated in the stock market, there will probably be as much diversity and selec,.. tivi ty as was experienced in the advancing phase. Several groups appear to be forming potential base patterns, although this may take more time. Some aircraft manufacturing issues are a case in point. Downside objectives were reached early in the decline and fairly good potential base patterns have been formed. The electronic group alSb has been showing above average action as well as the consumer goodS' groups such as the drugs and food chains mentioned in letters over the past few months. Would continue the policy of concentrating on groups with favorable patterns and eliminate unfavorable groups on strength in order to build up a 50 liquid position to take advantage of later buying opportunities. EDMUND W. TABELL WALSTON & CO. INC. ThiS '!1nrket leHer IS not. and under no Circumstances IS to be construed as, an offer to sell or II sohcltatlOn to buy any SeCUTllle8 referred to herein The mformatlon (ontrllnecl hC!rC!1n IS not ItllnranlC!cd as to or completeness and the thereof IS not, and un del' no crrcumstall('es IS to be construed as, a reprll!cnta- 1!on by &. Co, Inc All expre;SlOns of OPInion are subject to chanJ!e Without nohcc \\'alston & Co, Inc, and Officers, DIrectors, Stockholders and F,mplo(.'Cs theleof, sell and mfl.Y hn.. e an Illtcrest In the mcntlOned herem ThIS mnrket letter IS wtended and presented mcrely a! a general, Inform,1i commentary on .iay to dny market nes and not as a complete Rllalyu; A,(dltlOnal mfOlmntl0n \\Ith 1CllJect to nny sccuntze' referred to herein ill be fUI up')n request \\.. 301