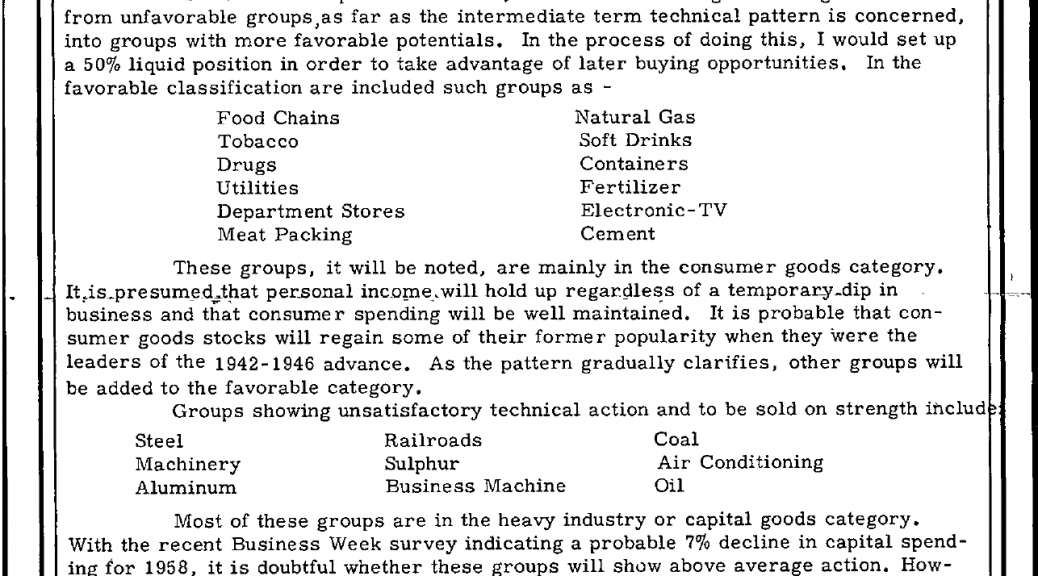 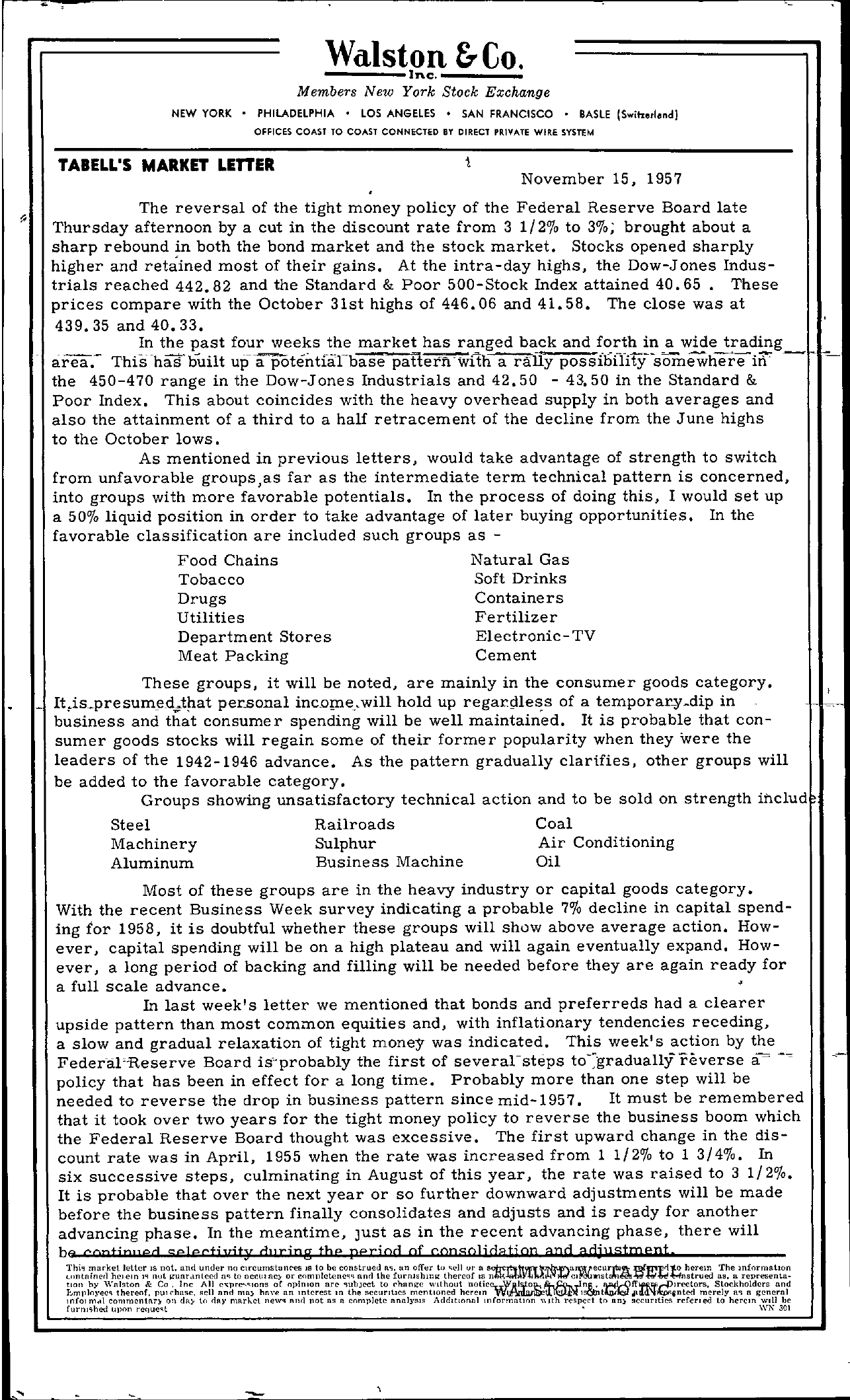 Walston &Co. Inc. ….;….;;..; Members New York Stock Exchange NEW YORK PHILADELPHIA LOS ANGELES SAN FRANCISCO BASLE ISwit,l.nd) OFFICES COAST TO COAST CONNECTED BY DIRECT PRIVATE WIRE SYSTEM TABELL'S MARKET LEnER November 15, 1957 The reversal of the tight money policy of the Federal Reserve Board late Thursday afternoon by a cut in the discount rate from 3 1/2 to 3; brought about a sharp rebound in both the bond market and the stock market. Stocks opened sharply higher and retained most of their gains. At the intra-day highs, the Dow-Jones Industrials reached 442.82 and the Standard & Poor 500-Stock Index attained 40.65. These prices compare with the October 31st highs of 446.06 and 41.58. The close was at 439.35 and 40.33. In the past four weeks the market has ranged back and forth in a wide trading a.rea.- This-hasbuilt up-apotentlsTbase paRer'fiwl1n a rally posslbiTity–somewhereirt' – the 450-470 range in the Dow-J ones Industrials and 42.50 – 43.50 in the Standard & Poor Index. This about coincides with the heavy overhead supply in both averages and also the attainment of a third to a half retracement of the decline from the June highs to the October lows. As mentioned in previous letters, would take advantage of strength to switch from unfavorable groups ,as far as the intermediate term technical pattern is concerned, into groups with more favorable potentials. In the process of doing this, I would set up a 50 liquid position in order to take advantage of later buying opportunities. In the favorable classification are included such groups as – Food Chains Tobacco Drugs Utilities Department Stores Meat Packing Natural Gas Soft Drinks Containers Fertilizer Electronic – TV Cement – – These groups, it will be noted, are mainly in the consumer goods category. per-Bonal hold up of a in business and that consumer spending will be well maintained. It is probable that con- sumer goods stocks will regain some of their former popularity when they were the leaders of the 1942-1946 advance. As the pattern gradually clarifies, other groups will be added to the favorable category. Groups showing unsatisfactory technical action and to be sold on strength includ Steel Machinery Aluminum Railroads Sulphur Business Machine Coal Air Conditioning Oil Most of these groups are in the heavy industry or capital goods category. With the recent Business Week survey indicating a probable 70/0 decline in capital spend- ing for 1958, it is doubtful whether these groups will show above average action. How- ever, capital spending will be on a high plateau and will again eventually expand. How- ever, a long period of backing and filling will be needed before they are again ready for a full scale advance. ' In last week's letter we mentioned that bonds and preferreds had a clearer upside pattern than most common equities and, with inflationary tendencies receding, a slow and gradual relaxation of tight money was indicated. This week's action by the Feder-al-Reserve Board the first of severarsteps to-graduallyreverse a- policy that has been in effect for a long time. Probably more than one step will be needed to reverse the drop in business pattern since mid-1957. It must be remembered that it took over two years for the tight money policy to reverse the business boom which the Federal Reserve Board thought was excessive. The first upward change in the dis- count rate was in April, 1955 when the rate was increased from 1 1/2 to 1 3/4. In six successive steps, culminating in August of this year, the rate was raised to 3 1/2. It is probable that over the next year or so further downward adjustments will be made before the business pattern finally consolidates and adjusts and is ready for another advancing phase. In the meantime, Just as in the recent advancing phase, there will be coptinned SAlectjvjty dJJring the perjod Of consoljdatjon and adjustment market letter IS not, nnd under no ClfcumstaTICcs IS to be construed an offer tu ;ell or II herem The mformatlOn umtninc(j hmcln nut ae; to nCClIIRC) or and the tlrnlshlnl thereof IS as. a representn tlon by \\'nlston & Co, Inc All or opinion are 'lubJcct to ('hnnle WIthout noticc…. Stockholders and bmpoyee'!. thereof. pult'hase, sell and mal hn\'c an mterest m the securltlCs mentIOned herem merely Il'l a general lnfol m.ll Comm!!ntar) 01\ dll) to dllY nlflrh.!!t new'!. and I\ot as a complete analYSIS Addltmnal Lllformatlon \\ Ith respect to an) 9ccuntics rEferled to herem will be furm.,hed upon reque'lot ' \ \ ' I \ ' 301