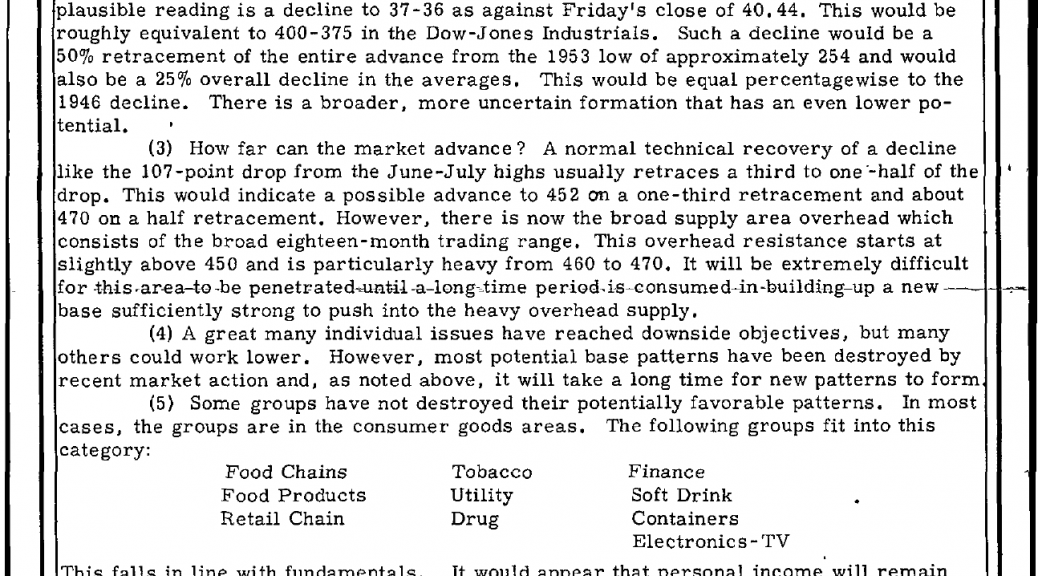 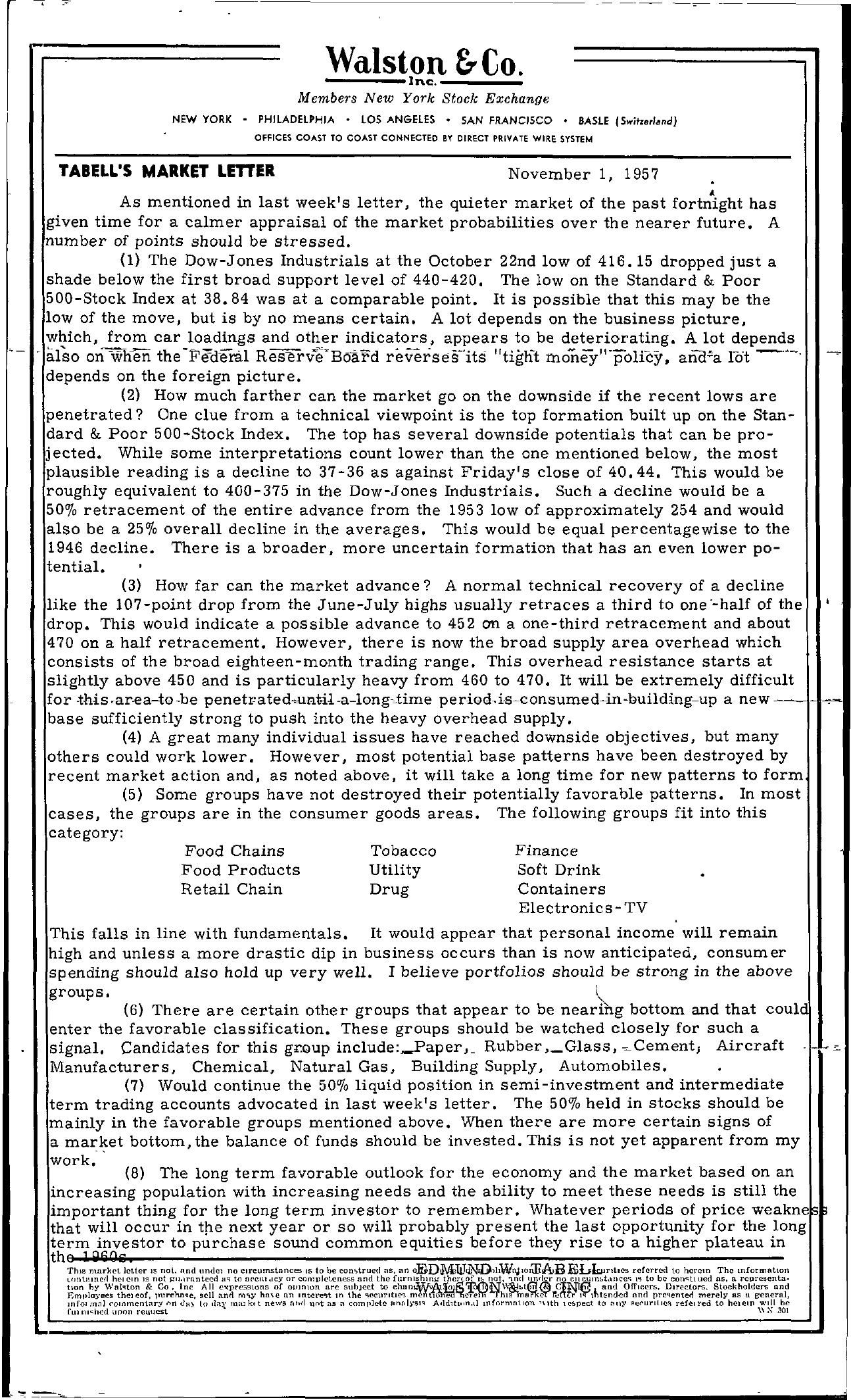 ———————————————– NEW YORK Wdlston &- CO.—–Inc. Members New York Stock Exchange PHILADELPHIA LOS ANGELES SAN FRANCISCO 8ASLE (Swi,,.,I.ndj OFFICES COAST TO COAST CONNECTED BY DIRECT PRIVATE WIRE SYSTEM TABELL'S MARKET LETTER November 1, 1957 As mentioned in last week's letter, the quieter market of the past fortnight has given time for a calmer appraisal of the market probabilities over the nearer future. A number of points should be stressed. (1) The Dow-Jones Industrials at the October 22nd low of 416.15 dropped just a shade below the first broad support level of 440-420. The low on the Standard & Poor 500-Stock Index at 38.84 was at a comparable point. It is possible that this may be the low of the move, but is by no means certain. A lot depends on the business picture, which, from car loadings and other indicators, appears to be deteriorating. A lot depends – also on -wnen the -Pe'd-eral Reserve-Board reverses-'its tight money'policy. lot —, depends on the foreign picture. (2) How much farther can the market go on the downside if the recent lows are penetrated One clue from a technical viewpoint is the top formation built up on the Stan- dard & Poor 500-Stock Index. The top has several downside potentials that can be pro- jected. While some interpretations count lower than the one mentioned below, the most plausible reading is a decline to 37-36 as against Friday's close of 40.44. This would be roughly equivalent to 400-375 in the Dow-Jones Industrials. Such a decline would be a 50 retracement of the entire advance from the 1953 low of approximately 254 and would also be a 25 overall decline in the averages. This would be equal percentage wise to the 1946 decline. There is a broader, more uncertain formation that has an even lower po- tential. (3) How far can the market advance A normal technical recovery of a decline like the 107-point drop from the June-July highs usually retraces a third to one '-half of the drop. This would indicate a possible advance to 452 on a one-third retracement and about 470 on a half retracement. However, there is now the broad supply area overhead which consists of the broad eighteen-month trading range. This overhead resistance starts at slightly above 450 and is particularly heavy from 460 to 470. It will be extremely difficult for -t-his-ar,ea-to-be pedodLs-consumed-in-building-up a new base sufficiently strong to push into the heavy overhead supply. (4) A great many individual issues have reached downside objectives, but many others could work lower. However, most potential base patterns have been destroyed by recent market action and, as noted above, it will take a long time for new patterns to form (5) Some groups have not destroyed their potentially favorable patterns. In most cases, the groups are in the consumer goods areas. The following groups fit into this category Food Chains Tobacco Finance Food Products Utility Soft Drink Retail Chain Drug Containers Electronics-TV ..,.- This falls in line with fundamentals. It would appear that personal income will remain high and unless a more drastic dip in business occurs than is now anticipated, consumer spending should also hold up very well. I believe portfolios should be strong in the above groups. \ (6) There are certain other groups that appear to be nearing bottom and that could enter the favorable classification. These groups should be watched closely for such a signal. Candidates for this gr.oup includePaper, Rubber,Glass, Aircraft Manufacturers, Chemical, Natural Gas, Building Supply, Automobiles. (7) Would continue the 50 liquid position in semi-investment and intermediate term trading accounts advocated in last week's letter. The 50 held in stocks should be mainly in the favorable groups mentioned above. When there are more certain signs of a market bottom, the balance of funds should be invested. This is not yet apparent from my work. (8) The long term favorable outlook for the economy and the market based on an increasing popUlation with increasing needs and the ability to meet these needs is still the important thing for the long term investor to remember. Whatever periods of price weakne that will occur in tj1e next year or so will probably present the last opportunity for the long term investor to purchase sound common equities before they rise to a higher plateau in the J ThIS market letter 15 not, Ilnd uncle no clrcumstnnces IS to be ns, an oEDMlaJrNd)nlWnJlO;J1ABELbrltw5 referred to herem The mlocmnllOn Lontnlncd he ('In IS not g1l.1rnntccd to 3'Clll..tcy or completeness and the furnlshlnJ, theru)f not, 'Inri no… I to be con;ti ued as, a representa- tlOn hy & Co, Ine All c'lpre5Slons of OPInIOn are subject to and Officers, Directors, Stockholders and E1Y1II1oyC'e5 theleof, purchMe, sell and m'l.Y ha\c an In the ;e(urltJe; mar e Id'h.r Ittended and merely 8S II general, lllfolmnl ('010l11en1ary fin to ,lal( nl!llklt news nnrl lint a5 n complete A,ldltilln.li lllformntion '\Ith lC&pect to nny ;;\l('UrtlICS refclred to heleln wilt be fUII1I;hed upon rellllcst \\\ 301