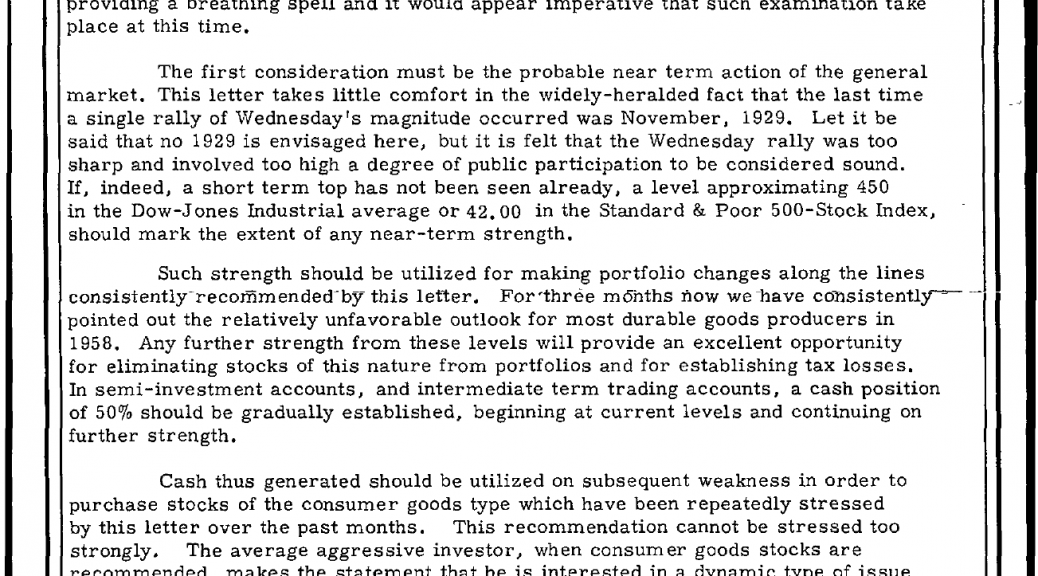 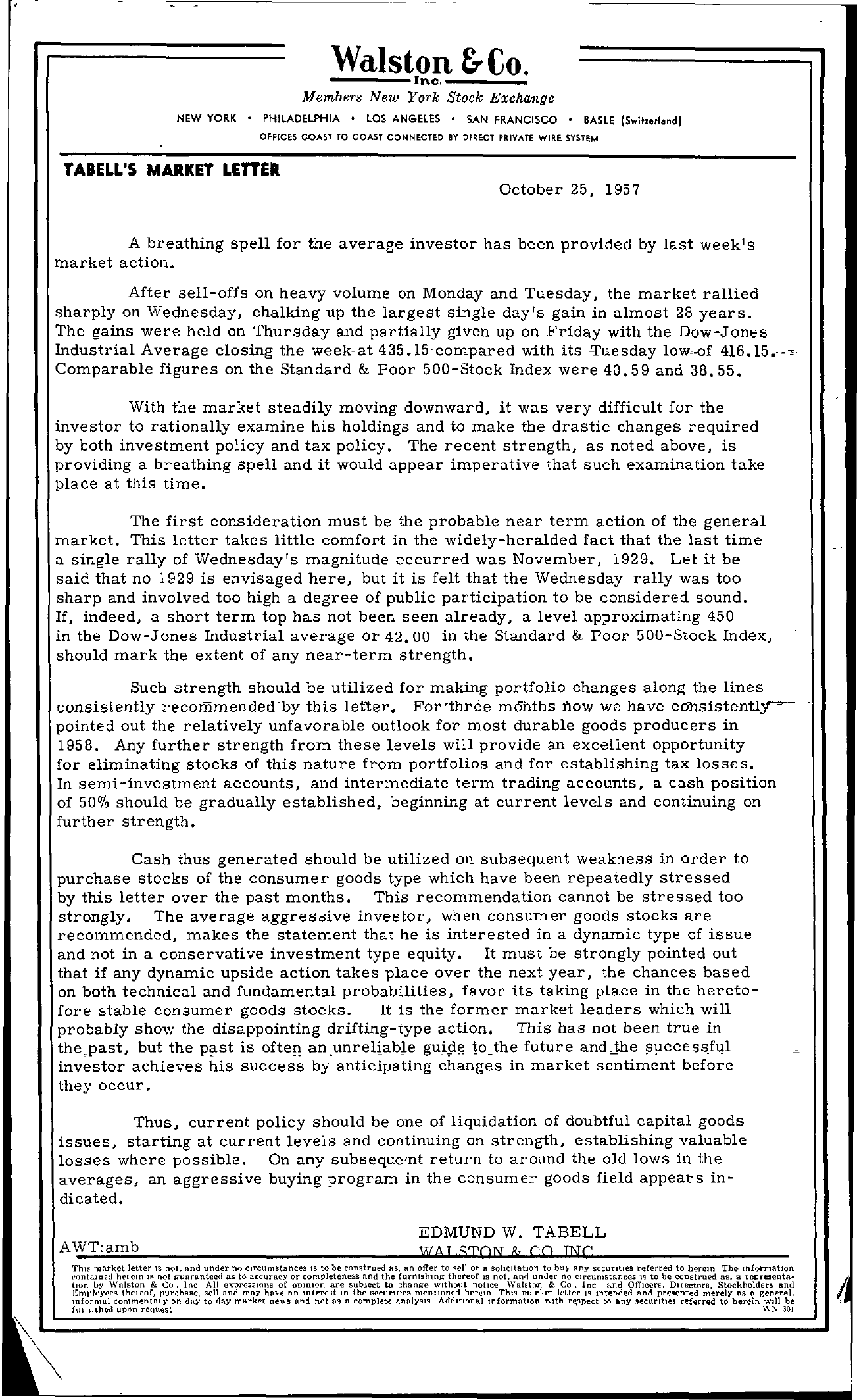 Walston &Co. – – – – I n c . – Members New York Stock Exchange NEW YORK PHILADELPHIA LOS ANGELES SAN FRANCISCO BASLE (Swa,.,l.,d) OFFICES COAST TO COAST CONNECTED BY DIRECT PRIVATE WIRE SYSTEM TABELL'S MARKET LETTER October 25, 1957 A breathing spell for the average investor has been provided by last week's market action. After sell-offs on heavy volume on Monday and Tuesday, the market rallied sharply on Wednesday, chalking up the largest single day's gain in almost 28 years. The gains were held on Thursday and partially given up on Friday with the Dow-Jones Industrial Average closing the week- at 435.15 'compared with its 'Tuesday 416.15.,,, Comparable figures on the Standard & Poor 500-Stock Index were 40.59 and 38.55. With the market steadily moving downward, it was very difficult for the investor to rationally examine his holdings and to make the drastic changes required by both investment policy and tax policy. The recent strength, as noted above, is providing a breathing spell and it would appear imperative that such examination take place at this time. The first consideration must be the probable near term action of the general market. This letter takes little comfort in the widely-heralded fact that the last time a single rally of Wednesday's magnitude occurred was November, 1929. Let it be said that no 1929 is envisaged here, but it is felt that the Wednesday rally was too sharp and involved too high a degree of public participation to be considered sound. If, indeed, a short term top has not been seen already, a level approximating 450 in the Dow-J ones Industrial average or 42.00 in the Standard & Poor 500-Stock Index, should mark the extent of any near-term strength. Such strength should be utilized for making portfolio changes along the lines consistently-recommended-by this letter. For'three mohths now we -have pointed out the relatively unfavorable outlook for most durable goods producers in 1958. Any further strength from these levels will provide an excellent opportunity for eliminating stocks of this nature from portfolios and for establishing tax losses. In semi-investment accounts, and intermediate term trading accounts, a cash position of 50 should be gradually established, beginning at current levels and continuing on further strength. – Cash thus generated should be utilized on subsequent weakness in order to purchase stocks of the consumer goods type which have been repeatedly stressed by this letter over the past months. This recommendation cannot be stressed too strongly. The average aggressive investor, when consumer goods stocks are recommended, makes the statement that he is interested in a dynamic type of issue and not in a conservative investment type equity. It must be strongly pointed out that if any dynamic upside action takes place over the next year, the chances based on both technical and fundamental probabilities, favor its taking place in the hereto- fore stable consumer goods stocks. It is the former market leaders which will probably show the disappointing drifting-type action. This has not been true in the,past, but the isoftel'! an,unrel!abJ,e tothe future andjhe slccess.ful investor achieves his success by anticipating changes in market sentiment before they occur. Thus, current policy should be one of liquidation of doubtful capital goods issues, starting at current levels and continuing on strength, establishing valuable losses where possible. On any subseque'nt return to around the old lows in the averages, an aggressive buying program in the consumer goods field appears in- dicated. AWTamb EDMUND W. TABELL )orA! STON & CO INC ThiS market letter IS 001, lind under no Circumstances IS to be construed as, an offer to or n sohcltatJOn to any securities referred to herem The mformntlOn l'()ntamed h('1 ('In 11 not gunrlLnlecr! as to accuracy or compiet(lneos nnd the furntshlnJ thereof lS not, and unucr no circumstances I'! to be construed as, a Tepresenta lIOn by ''''II)ston & Co, Jnc All e'lpresslOns of opmlOn are subject to change without notice Walston &- Co, Inc, and Officers, Directors, Stockholders and Eml!luy('es thelcor, purchase, sell and hll\oe nn In the mentioned bcrllm. market letter IS Intended and presented merely ns n general. Informal commentmy on to rlny market nev.s and not as a complete AddltHmal mformatlon \\lth to any securities referred to herein wlll be CUI nlsher! upon re(IUest \\ 301