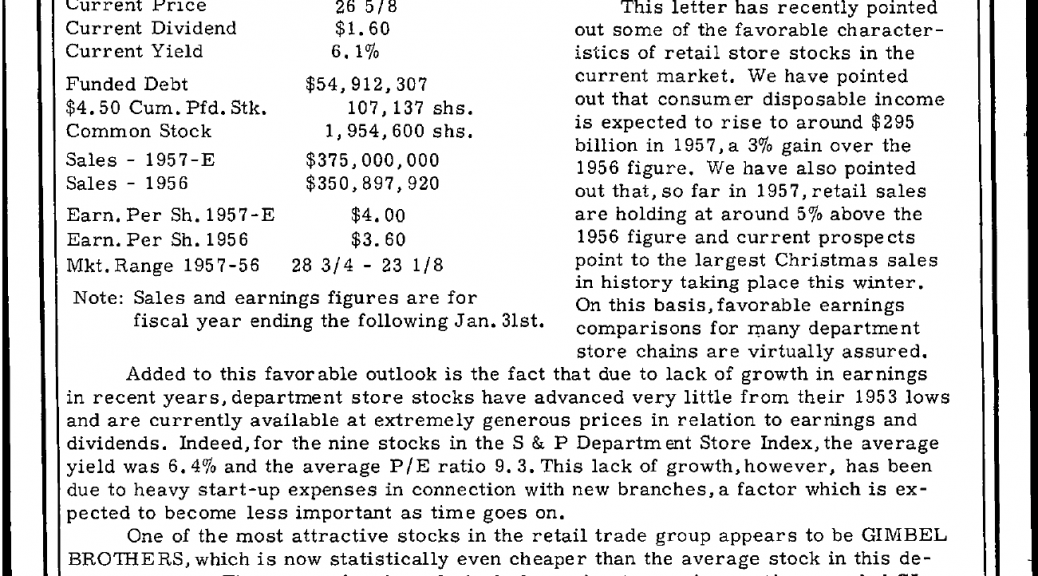 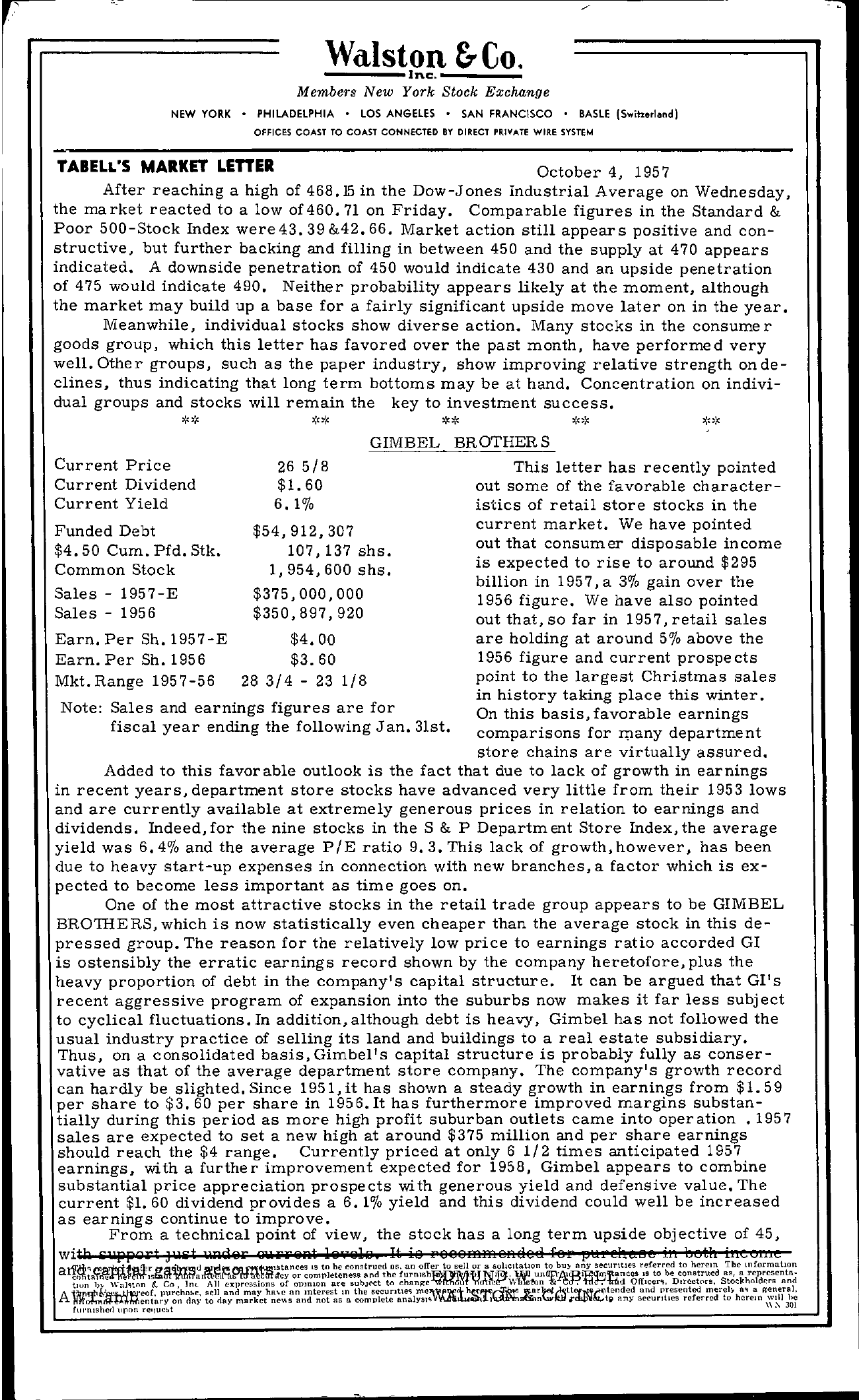 Walston &Co.——–Inc.– Members New York Stock Exchange NEW YORK PHILADELPHIA LOS ANGELES SAN FRANCISCO BASLE (Switml d) OFFICES COAST TO COAST CONNECTED BY OIRECT PRIVATE WIRE SYSTEt.4 TABELL'S MARKET LEnER October 4, 1957 After reaching a high of 468.15 in the Dow-J ones Industrial Average on Wednesday, the rna rket reacted to a low of 460.71 on Friday. Comparable figures in the Standard & Poor 500-Stock Index were43. 39 &42. 66. Market action still appears positive and constructive, but further backing and filling in between 450 and the supply at 470 appears indicated. A downside penetration of 450 would indicate 430 and an upside penetration of 475 would indicate 490. Neither probability appears likely at the moment, although the market may build up a base for a fairly significant upside move later on in the year. Meanwhile, individual stocks show diverse action. Many stocks in the consume r goods group, which this letter has favored over the past month, have performed very welL Other groups, such as the paper industry, show improving relative strength onde- clines, thus indicating that long term bottoms may be at hand. Concentration on indivi- dual groups and stocks will remain the key to investment success. ', 'c GIMBEL BROTHER S Current Price Current Dividend Current Yield 26 5/8 1. 60 6.10/0 This letter has recently pointed out some of the favorable characteristics of retail store stocks in the Funded Debt 4.50 Cum. Pfd. Stk. Common Stock Sales – 1957-E Sales – 1956 54,912,307 107,137 shs. 1,954,600 shs. 375,000,000 350,897,920 current market. We have pointed out that consumer disposable income is expected to rise to around 295 billion in 1957, a 30/0 gain over the 1956 figure. We have also pointed out that, so far in 1957, retail sales Earn. Per Sh. 1957-E 4.00 Earn. Per Sh. 1956 3.60 Mkt.Range 1957-56 283/4 – 23 1/8 Note Sales and earnings figures are for fiscal year ending the following J an. 31st. are holding at around 50/0 above the 1956 figure and current prospects point to the largest Christmas sales in history taking place this winter. On this basis, favorable earnings comparisons for many department store chains are virtually assured. Added to this favorable outlook is the fact that due to lack of growth in earnings in recent years, department store stocks have advanced very little from their 1953 lows and are currently available at extremely generous prices in relation to earnings and dividends. Indeed, for the nine stocks in the S & P Departm ent Store Index, the average yield was 6.40/0 and the average P /E ratio 9.3. This lack of growth, however, has been due to heavy start-up expenses in connection with new branches, a factor which is ex- pected to become less important as time goes on. One of the most attractive stocks in the retail trade group appears to be GIMBEL BR01HERS, which is now statistically even cheaper than the average stock in this de- pressed group. The reason for the relatively low price to earnings ratio accorded GI is ostensibly the erratic earnings record shown by the company heretofore, plus the heavy proportion of debt in the company's capital structure. It can be argued that Gl's recent aggressive program of expansion into the suburbs now makes it far less subject to cyclical fluctuations. In addition, although debt is heavy, Gimbel has not followed the usual industry practice of selling its land and buildings to a real estate subsidiary. Thus, on a consolidated basis, Gimbel's capital structure is probably fully as conservative as that of the average department store company. The company's growth record can hardly be slighted. Since 1951, it has shown a steady growth in earnings from 1.59 per share to 3.60 per share in 1956. It has furthermore improved margins substan- tially during this period as more high profit suburban outlets came into operation. 1957 sales are expected to set a new high at around 375 million and per share earnings should reach the 4 range. Currently priced at only 6 1/2 times anticipated 1957 earnings, with a further improvement expected for 1958, Gimbel appears to combine substantial price appreciation prospects with generous yield and defensive value. The current 1. 60 dividend provides a 6.10/0 yield and this dividend could well be increased as earnings continue to improve. From a technical point of view, the stock has a long term upside obj ective of 45, with Sl'FF9'F JHIi unag. g,UPF9Rt lQUQ.tl!ilu It is P8eeRlRlF1S8e. fSI pen in both incornc gllQtnolld Qldlf!l N'I m4qzpstances LS to be construed os, an offer to sell or a soliCitatIOn to bu) any seCUrities referred to herem The mformatlOn twn 8.. Co, In.- All expressions or completeness and the \llJl of OPiniOn are subJC'ct to change-WMidUt'r1'cnibt'\\'\'sfon &J;-ect-'trld'-;'irltd IS to be construed as, a reprcsentnOfficer'!, DIrectors, Stockholders and A 11n'lnhtl llurcha!oe, sell and may hR\e an mterest In the secuntlc'l IHtrJ..mJi!.I;J\-Mientllry on clay to day market nev.S and not as a complete and presented n'l a an)' securIties referred to hcrem he flll'nlshcrlllpon \\-.. 301 2