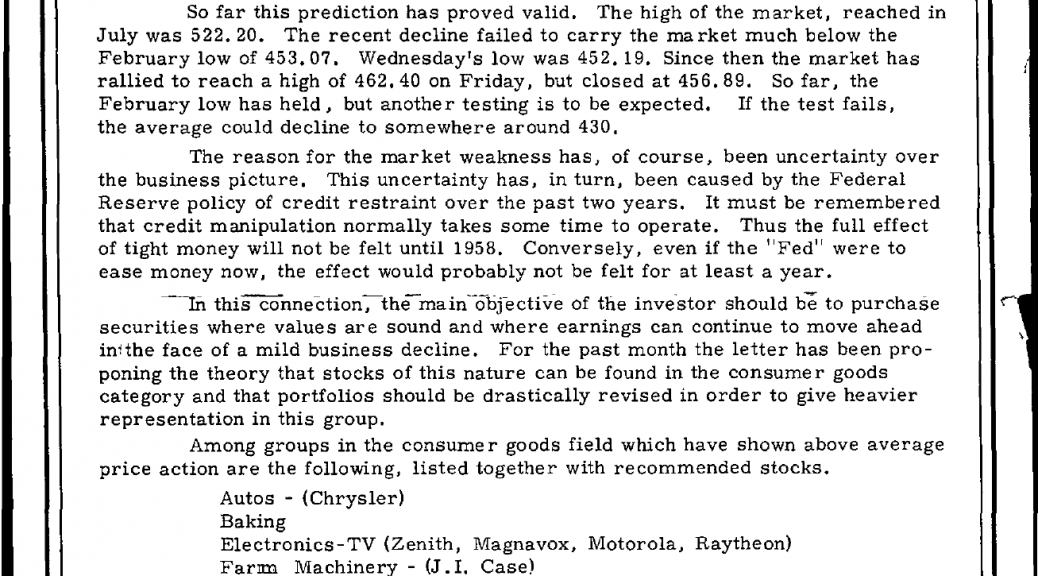 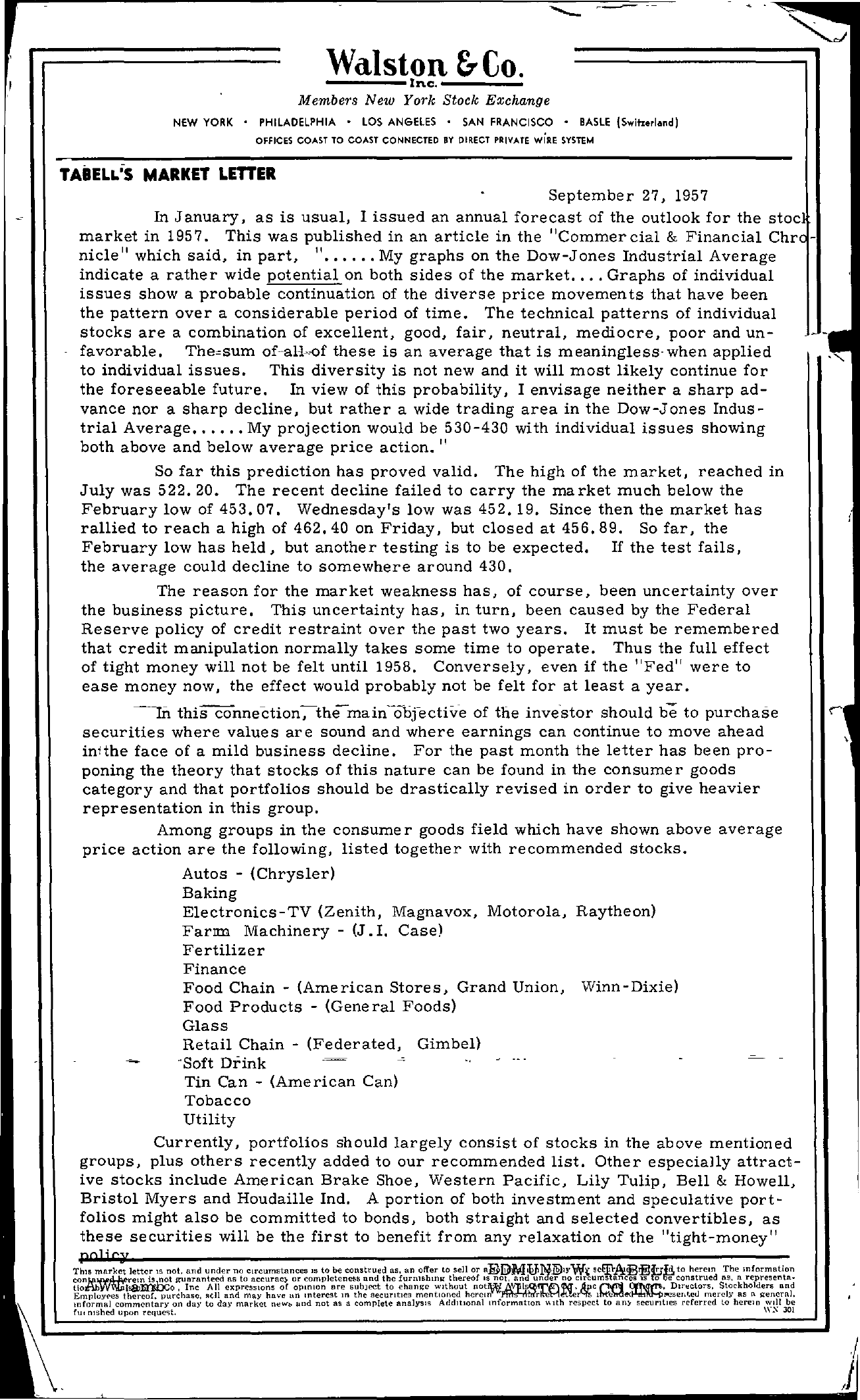 NEW YORK -W–a-lIsntoon.-&-reo. Members New York Stock Exchange PHILADELPHIA LOS ANGELES SAN FRANCISCO BASLE (Swaml.nd) OFFICES COAST TO COAST CONNECTED BY DIRECT PRIVATE wiRE SYSTEM TAiEllo'S MARKET LEnER September 27, 1957 In January, as is usual, I issued an annual forecast of the outlook for the to,, market in 1957. This was published in an article in the Commer cial & Financial C-.. nicle which said, in part, .. My graphs on the Dow-Jones Industrial Average indicate a rather wide potential on both sides of the market… Graphs of individual issues show a probable continuation of the diverse price movements that have been the pattern over a considerable period of time. The technical patterns of individual stocks are a combination of excellent, good, fair, neutral, mediocre, poor and un- favorable. Thesum these is an average that is meaninglesswhen applied to individual issues. This diversity is not new and it will most likely continue for the foreseeable future. In view of this probability, I envisage neither a sharp ad- vance nor a sharp decline, but rather a wide trading area in the Dow-Jones Indus- trial Average . My projection would be 530-430 with individual issues showing both above and below average price action. So far this prediction has proved valid. The high of the market, reached in July was 522.20. The recent decline failed to carry the rna rket much below the February low of 453.07. Wednesday's low was 452.19. Since then the market has rallied to reach a high of 462.40 on Friday, but closed at 456.89. So far, the February low has held, but another testing is to be expected. If the test fails, the average could decline to somewhere around 430. The reason for the market weakness has, of course, been uncertainty over the business picture. This uncertainty has, in turn, been caused by the Federal Reserve policy of credit restraint over the past two years. It must be remembered that credit manipulation normally takes some time to operate. Thus the full effect of tight money will not be felt until 1958. Conversely, even if the Fed were to ease money now, the effect would probably not be felt for at least a year. thisconnection–themain–obrective of the investor should be to purchase securities where values are sound and where earnings can continue to move ahead inithe face of a mild business decline. For the past month the letter has been proponing the theory that stocks of this nature can be found in the consumer goods category and that portfoliOS should be drastically revised in order to give heavier representation in this group. Among groups in the consume r goods field which have shown above average price action are the following, listed together with recommended stocks. Autos – (Chrysler) Baking Electronics-TV (Zenith, Magnavox, Motorola, Raytheon) Farnn Machinery – (J. 1. Case) Fertilizer Finance Food Chain – (American Stores, Grand Union, Winn-Dixie) Food Products – (General Foods) Glass Retail Chain – (Federated, Gimbel) – Soft Di'ink Tin Can – (American Can) Tobacco Utility Currently, portfolios should largely consist of stocks in the above mentioned groups, plus others recently added to our recommended list. Other especiaJly attract- ive stocks include American Brake Shoe, Western Pacific, Lily Tulip, Bell & Howell, Bristol Myers and Houdaille Ind. A portion of both investment and speculative port- folios might also be committed to bonds, both straight and selected convertibles, as these securities will be the first to benefit from any relaxation of the tight-money polj GJT Tl'llB market letter IS not, Ilnd under no circumstances IS to be construed ns, an olter to sell or W'i 5cffii\!E3'.E'rrld. to herem The mformation is not jfUaranteed as to accurac) or completeness and the furnlshmg thereOf IS not. nnd \uIJer no clrcurritianccs IS to'Se'construed as, a representn tloIl1hYV'tYJilslblSiilJCo, Inc All expressIOns of opinion are subject to change Without notW Ape ('tlIfIj Stockholders Ilnd Emp\oyf'cS thereof, purchase, R(.11 and may hnve lIl\ Interest m the securities mentioned het'em merely liS Il generlll, Informal eommentary on da)' to day market new.. und not as a complete analYSIS AdditIOnal Information \\lth respect to an)o seCUrities referred to hereIn v.1!I be fUllllshed upon re'lue't, \\x 301