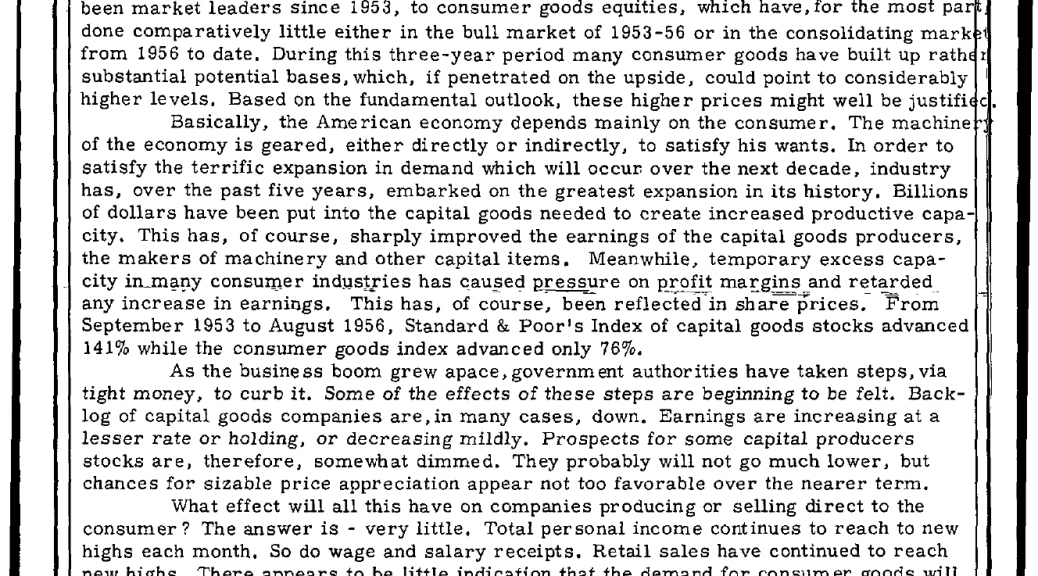 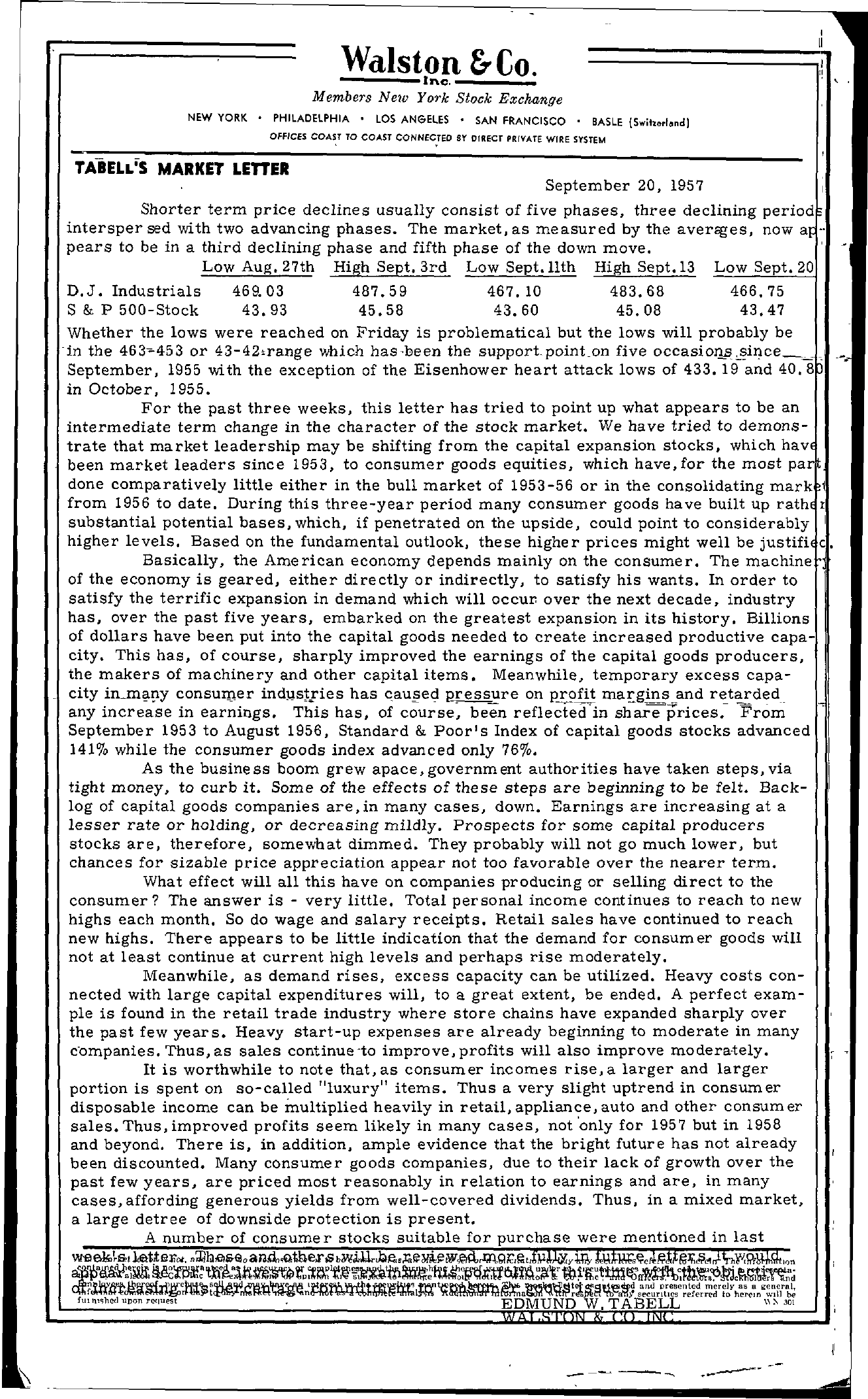 Walston &Co, —';;;Inc, – Members New York Stock Exchange NEW YORK PHILADELPHIA LOS ANGELES SAN FRANCISCO BASLE (Swawl..d) OFFICES TO COAST CONNEC.TEO BY DIRECT PRIVATe WIRE SYSTEM ,, TABELL'S MARKET LETTER September 20, 1957 Shorter term price declines usually consist of five phases, three declining period intersper sed with two advancing phases. The market, as measured by the avercges, now aI — pears to be in a third declining phase and fifth phase of the down move. ' Low Aug. 27th High Sept. 3rd Low Sept. 11th High Sept. 13 Low Sept. 20 – D. J. Industrials S & P 500-Stock 469.03 43.93 487.59 45.58 467.10 43.60 483.68 45.08 466.75 43.47 Whether the lows were reached on Friday is problematical but the lows will probably be 'in the or 43-42,range which has,been the supportpoinLon five September, 1955 with the exception of the Eisenhower heart attack lows of 433. 19 and 40.8 in October, 1955. For the past three weeks, this letter has tried to point up what appears to be an intermediate term change in the character of the stock market. We have tried to demons- trate that market leadership may be shifting from the capital expansion stocks, which hav been market leaders since 1953, to consumer goods equities, which have, for the most par done comparatively little either in the bull market of 1953-56 or in the consolidating mark 1 from 1956 to date. During this three-year period many consumer goods have built up rath r substantial potential bases, which, if penetrated on the upside, could point to considerably I higher levels. Based on the fundamental outlook, these higher prices might well be justifi c. Basically, the Ame rican economy depends mainly on the consume r. The machine J of the economy is geared, either directly or indirectly, to satisfy his wants. In order to satisfy the terrific expansion in demand which will occur. over the next decade, industry has, over the past five years, embarked on the greatest expansion in its history. Billions of dollars have been put into the capital goods needed to create increased productive capa- city. This has, of course, sharply improved the earnings of the capital goods producers, the makers of machinery and other capital items. Meanwhile, temporary excess capa- city consuIIler industries has cauped Rressure on Rrofit ma;gins and retarded any increase in earnings. This has, of been reflecteifin share prices.- From September 1953 to August 1956, Standard & Poor's Index of capital goods stocks advanced 141 while the consumer goods index advanced only 76. As the business boom grew apace, government authorities have taken steps, via tight money, to curb it. Some of the effects of these steps are beginning to be felt. Back- log of capital goods companies are, in many cases, down. Earnings are increasing at a lesser rate or hOlding, or decreasing mildly. Prospects for some capital producers stocks are, therefore, somewhat dimmed. They probably will not go much lower, but chances for sizable price appreciation appear not too favorable over the nearer term. What effect will all this have on companies producing or selling direct to the consumer The answer is – very little. Total personal income continues to reach to new highs each month. So do wage and salary receipts. Retail sales have continued to reach new highs. There appears to be little indication that the demand for consum er goods will not at least continue at current high levels and perhaps rise moderately. Meanwhile, as demand rises, excess capacity can be utilized. Heavy costs con- nected with large capital expenditures will, to a great extent, be ended. A perfect exam- ple is found in the retail trade industry where store chains have expanded sharply over the past few years. Heavy start-up expenses are already beginning to moderate in many c'ompanies. Thus, as sales continue-to improve, profits will also improve moderately. It is worthwhile to note that, as consumer incomes rise, a larger and larger portion is spent on so-called luxury items. Thus a very slight uptrend in consumer disposable income can be multiplied heavily in retail, appliance, auto and other consum er sales. Thus, improved profits seem likely in many cases, not 'only for 1957 but in 1958 and beyond. There is, in addition, ample evidence that the bright future has not already been discounted. Many consumer goods companies, due to their lack of growth over the past few years, are priced most reasonably in relation to earnings and are, in many cases, affording generous yields from well-covered dividends. Thus, in a mixed market, a large detree of downside protection is present. A number of consume r stocks suitable for purchase were mentioned in last .—— ——