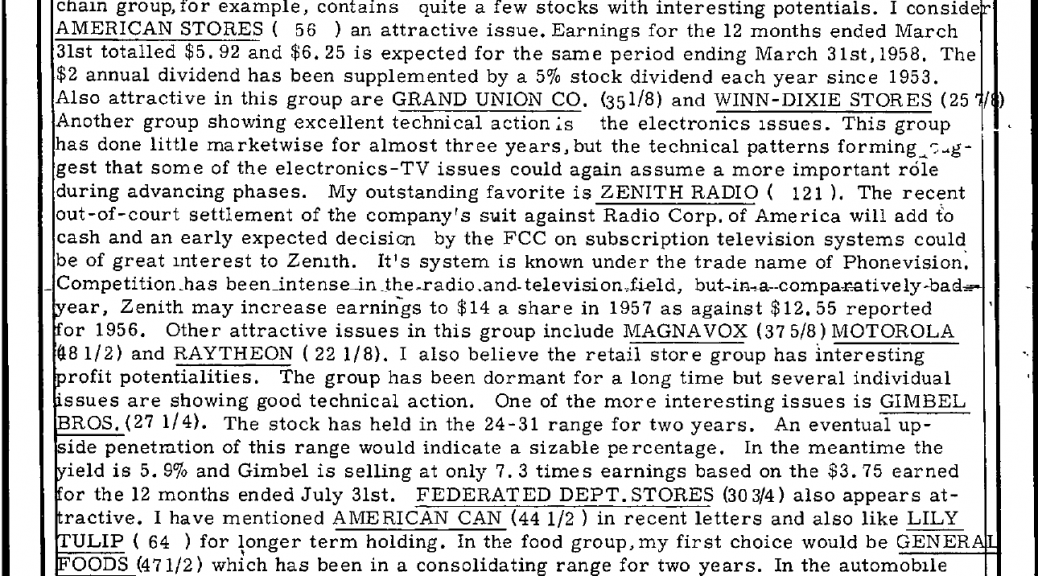 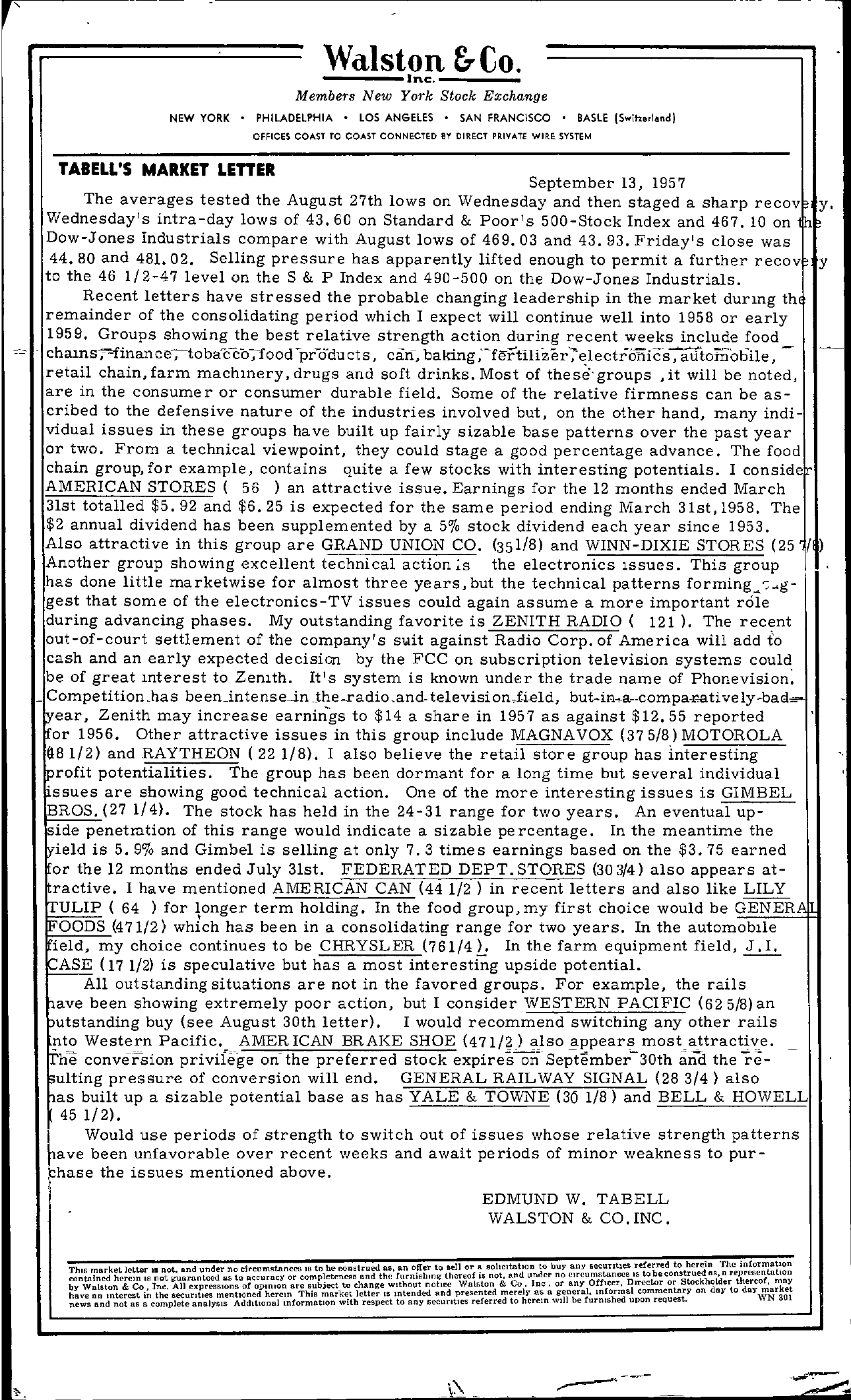 Walston &Co, Inc. Members New YOl'k Stock Exchange NEW YORK PHILADELPHIA LOS ANGELES SAN FRANCISCO BASLE (Swihl.nd) OFFICES COAST TO COAST CONNECTED BY DIRECT PRIVATE WIRE SYSTEM TABEll'S MARKET lEnER September 13, 1957 The averages tested the August 27th lows on Wednesday and then staged a sharp recov y Wednesday's intra-day lows of 43.60 on Standard & Poor's 500-Stock Index and 467. 10 on Dow-Jones Industrials compare with August lows of 469.03 and 43.93. Friday's close was 44.80 and 481. 02. Selling pressure has apparently lifted enough to permit a further recov y to the 46 1/2-47 level on the S & P Index and 490 -500 on the Dow-Jones Industrials. Recent letters have stressed the probable changing leadership in the market durmg th remainder of the consolidating period which I expect will continue well into 1958 or early 1959. Groups showing the best relative strength action during recent weeks include food -pr-oducts, calf, baking ,'-fertlli'zer7'electroTIicsatitotnobile, retail chain, farm machmery, drugs and soft drinks. Most of groups, it will be noted, are in the consumer or consumer durable field. Some of the relative firmness can be as- cribed to the defensive nature of the industries involved but, on the other hand, many indi- vidual issues in these groups have built up fairly sizable base patterns over the past year or two. From a technical viewpoint, they could stage a good percentage advance. The food chain group, for example, contains quite a few stocks with interesting potentials. I consicle AMERICAN STORES ( 56 ) an attractive issue. Earnings for the 12 months ended March 31st totalled 5.92 and 6.25 is expected for the same period ending March 31st, 1958. The 2 annual dividend has been supplemented by a 5 stock dividend each year since 1953. Also attractive in this group are GRAND UNION CO. (351/8) and WINN-DIXIE STORES (25 / ) Another group showing excellent technical action the electronics lssues. This group has done little marketwise for almost three years, but the technical patterns gest that some of the electronics-TV issues could again assume a more important role during advancing phases. My outstanding favorite is ZENITH RADIO ( 121). The recent out-of-court settlement of the company's S1.lit against Radio Corp. of America will add o cash and an early expected decisicn by the FCC on subscription television systems could be of great mterest to Zemth. It's system is known under the trade name of Phonevision Competition ,has beenintense-in ihe-radio.and. televisionSield, but-in-a-.compacr-atively-bad… Year, Zenith may increase earnings to 14 a share in 1957 as against 12.55 reported tfor 1956. Other attractive issues in this group include MAGNAVOX (375/8) MOTOROLA (181/2) and RAYTHEON (221/8). I also believe the retail store group has interesting !profit potentialities. The group has been dormant for a long time but several individual ssues are showing good technical action. One of the more interesting issues is GIMBEL BROS. (271/4). The stock has held in the 24-31 range for two years. An eventual up- side penetmtion of this range would indicate a sizable percentage. In the meantime the wield is 5.9 and Gimbel is selling at only 7.3 times earnings based on the 3.75 earned or the 12 months ended July 31st. FEDERATED DEPT. STORES (303/4) also appears at- ractive. I have mentioned AMERICAN CAN (441/2) in recent letters and also like LILY ITULIP (64 ) for l,onger term holding. In the food group, my first choice would be GENERt IFOODS (471/2) which has been in a consolidating range for two years. In the automoblle ield, my choice continues to be CHRYSLER (761/4). In the farm equipment field, J. 1. CASE (17 1/2) is speculative but has a most interesting upside potential. — All outstanding situations are not in the favored groups. For example, the rails rave been showing extremely poor action, but I consider WESTERN PACIFIC (62 5/8) an Jutstanding buy (see August 30th letter). I would recommend switching any other rails -Tnhteo Western Pacific. AMER ICAN BRAKE SHOE (471/2) also conversion privilege on' the preferred stock expires on appears most attractive. the iulting pressure of conversion will end. GENERAL RAILWAY SIGNAL (283/4) also built up a sizable potential base as has YALE & TOWNE (3(j 1/8) and BELL & HOWELL I 45 1/2). Would use periods of strength to switch out of issues whose relative strength patterns pave been unfavorable over recent weeks and await periods of minor weakness to pur- ihase the issues mentioned above. t EDMUND W. TABELL WALSTON & CO. INC. ThiS market letter IS not ond under no circumstances 18 to he construed as, an offer to sell 'Of a sohCltatlon to buy any securlhes referred to herein s Idcontained her(lln 18 not g'unrantccd as to accuracy or completeness and the furnishing thereof is not, and under no to /hereof may b Walston & Co Inc All exprel!Slons of OPiniOn are subject to change without notice Walston & Co, Inc, or any ICCI', lrec r or C 0 el' d m'arket an Interest securities mentioned herem This market letter 18 Intended and presented mereh' as a generaj' mf0hal on day to aY'VN 301 neWS and not as a complete analYSIS Additional mformatlOn with respect to any securltlel! referred to herein Will be urms upon reQues .