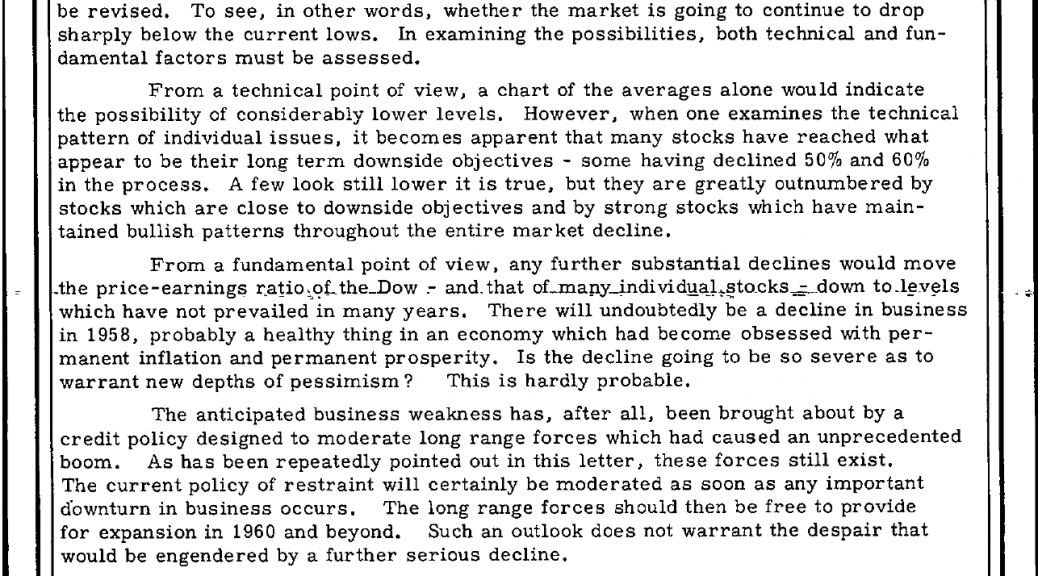 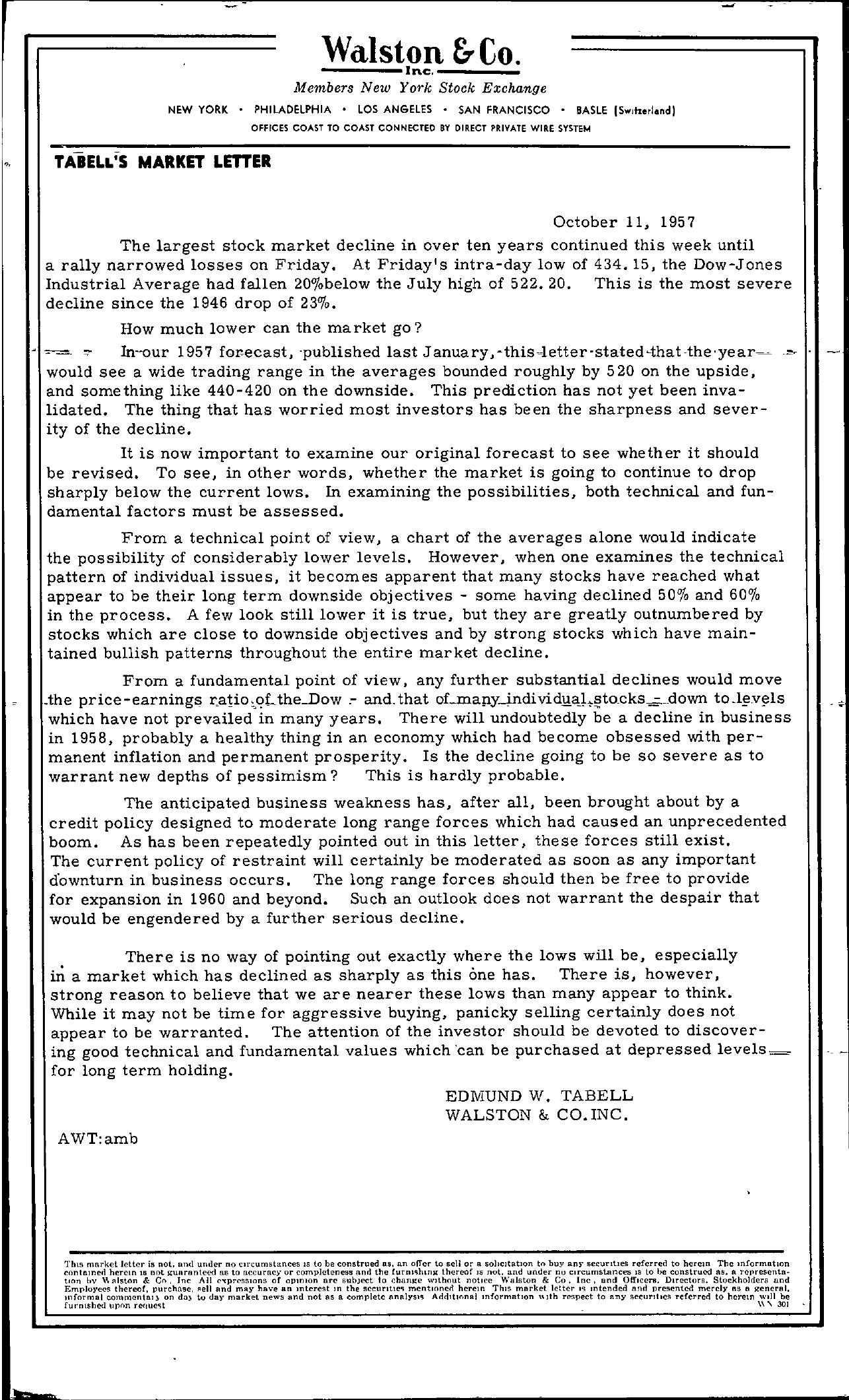 Walston &- Co. – – – – I n c . – …;. Members New York Stock Exchange NEW YORK PHILADELPHIA LOS ANGELES SAN FRANCISCO BASLE ISw,lml.nd) OFFICES COAST TO COAST CONNECTED BY DIRECT PRIVATE WIRE SYSTEM o. fABELL'S MARKET LmER October 11, 1957 The largest stock market decline in over ten years continued this week until a rally narrowed losses on Friday. At Friday's intra-day low of 434. 15, the Dow-Jones Industrial Average had fallen 200/0below the July high of 522.20. This is the most severe decline since the 1946 drop of 230/0. How much lower can the market go . .,. In-our 1957 forcecast, 'published last . . – would see a wide trading range in the averages bounded roughly by 5 20 on the upside, and something like 440-420 on the downside. This prediction has not yet been inva- lidated. The thing that has worried most investors has been the sharpness and sever- ity of the decline. It is now important to examine our original forecast to see whether it should be revised. To see, in other words, whether the market is going to continue to drop sharply below the current lows. In examining the possibilities, both technical and fun- damental factors must be assessed. From a technical point of view, a chart of the averages alone would indicate the possibility of considerably lower levels. However, when one examines the technical pattern of individual issues, it becomes apparent that many stocks have reached what appear to be their long term downside objectives – some having declined 500/0 and 600/0 in the process. A few look still lower it is true, but they are greatly outnumbered by stocks which are close to downside objectives and by strong stocks which have maintained bullish patterns throughout the entire market decline. From a fundamental point of view, any further substantial declines would move .the price -earnings r,atio ,,pCtheDow – and. that oLma!lyindivid1J.a),!;!tocks — .down to which have not prevailed in many years. There will undoubtedly be a decline in business in 1958, probably a healthy thing in an economy which had become obsessed with per- manent inflation and permanent prosperity. Is the decline going to be so severe as to warrant new depths of pessimism This is hardly probable. The anticipated business weakness has, after all, been brought about by a credit policy designed to moderate long range forces which had caused an unprecedented boom. As has been repeatedly pointed out in this letter, these forces still exist. The current policy of restraint will certainly be moderated as soon as any important downturn in business occurs. The long range forces should then be free to provide for expansion in 1960 and beyond. Such an outlook does not warrant the despair that would be engendered by a further serious decline. There is no way of pointing out exactly where the lows will be, especially iIi a market which has declined as sharply as this one has. There is, however. strong reason to believe that we are nearer these lows than many appear to think. While it may not be time for aggressive buying, panicky selling certainly does not appear to be warranted. The attention of the investor should be devoted to discovering good technical and fundamental values which 'can be purchased at depressed levels for long term holding. EDMUND W. TABELL WALSTON & CO.INC. AWTamb This mnrket letter is not. and under no CIrcumstances IS to be construed (IS. an offer to sell or a soliCitation to buy any securities referred to herein The InformntlOn con tamed herein IS not guaranteed as to accuracy or completeness anri the thereof IS not, and under nu circumstances IS to be construed as, n representA- tIOn bv \\ nlston & Co. Inc All cpreSSlOns of OPIniOn nre subject to chanle WIthout notIce YO,'alston & Co, Inc, and Officers. DIrectors. Stockholders and thereot, purchilse, I'ell nnd may have an mterest m the securltle'l mentlOneri herem This market letter 1; Intendefl and presented merely as (l Itenernl. lIl(ormal COfllfllentall on dal t.u day market news and not as a complete (lnalysl'I ArhiltlOnal mformatlon '\llh respect to any sccurltlcs referred to hereIn WIll be furnIshed upon rellUe'lt \\ '\ 301