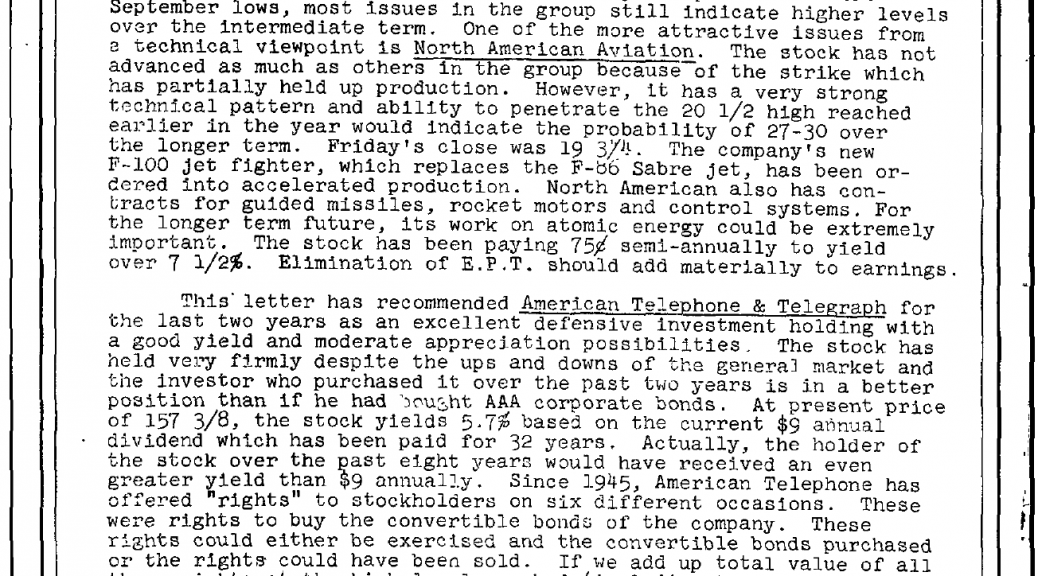 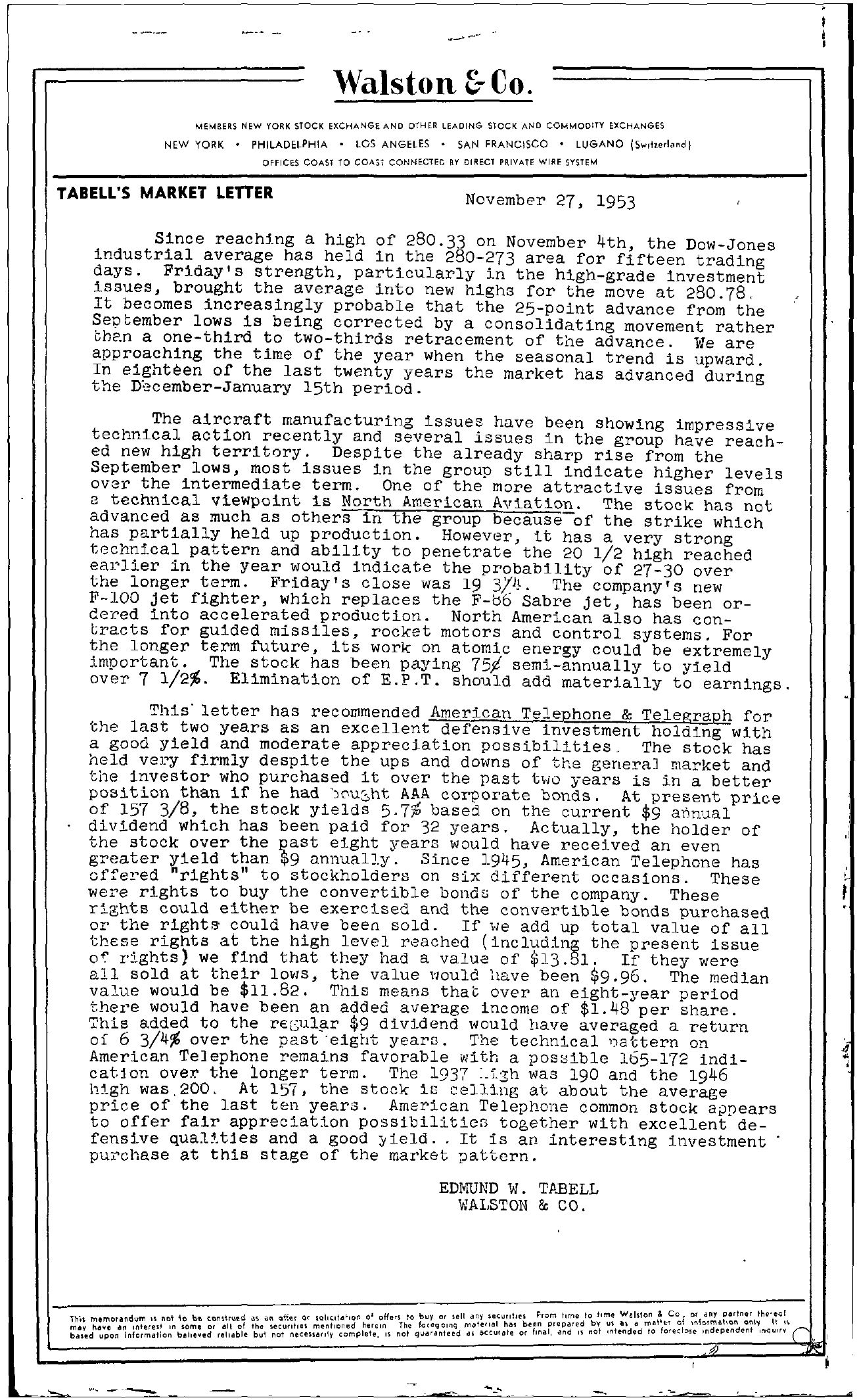 '''alston &- Co. MEMBERS NEW YORK STOCK EXCHANGe AND OTHER LEADING STOCK AND COMMODITY EXCHANGES NEW YORK PHILADELPHIA LOS ANGELES SAN FRANCISCO LUGANO iSwd,ld I OFFICES COAST TO COAST CONNECTEC BY DIRECT PRIVATE WIRE SYSTEM TAB ELL'S MARKET LETTER November 27, 1953 Since reachlng a high of 280.33 on November 4th, the Dow-Jones industrial average has held in the 280-273 area for fifteen trading days. Friday's strength, particularly in the high-grade investment issues, brought the average into new highs for the move at 280.78, It becomes increaslngly probable that the 25-point advance from the Setember lows is being corrected by a consolidating movement rather che.n a one-third to two-thirds retracement of the advance. We are approaching the time of the year when the seasonal trend is upward. In eighteen of the last twenty years the market has advanced during the December-January 15th period. The aircraft manufacturing issues have been showing impressive technical action recently and several issues in the group have reached new high territory. Despite the already sharp rise from the September lows, most issues in the group still indicate higher levels over the intermediate term. One of the more attractive issues from 3 technical viewpoint is North American Aviation. The stock has not advanced as much as others in the group because of the strike which has partially held up production. However, it has a very strong technical pattern and ability to penetrate the 20 1/2 high reached earlier in the year would indicate the probability of 27-30 over the longer term. Friday'S close was 19 31. The company's new F-IOO jet fighter, which replaces the F-b6 Sabre jet, has been ordered into accelerated prodUction. North American also has contracts for guided missiles, rocket motors and control systems. For the longer term future, its work on atomic energy could be extremely important. The stock has been paying 75t semi-annually to yield over 7 1/2. Elimination of E.P.T. should add materially to earnings. This' letter has recommended American Telephone & Telegraph for the last two years as an excellent defensive investment holding with a good yield and moderate appreciation Possibilities. The stock has held very firmly despite the ups and downs of the genera market and the investor who purchased it over the past two years is in a better position than if he had ')(\usht AAA corporate bonds. At present price of 157 3/8, the stock yieldS 5.7 based on the current 9 a11nual dividend Which has been paid for 32 years. Actually, the holder of the stock over the past eight years would have received an even greater yield than 9 annualJ.y. Since 1945, American Telephone has offered rights to stockholders on six different occasions. These were rights to buy the convertible bondS of the company. These rights could either be exercised and the convertible bonds purchased or the rights' could have been sold. If ,Ie add up total value of all these rights at the high level reached (including the present issue o rights) we flnd that they had a value of 13.81. If they were all sold at their 10VIS, the value 1'I0uld llBve been 9.96. The median value would be 11.82. This means that over an eight-J'ear period there would have been an added average income of 1.48 per share. 'lhis added to the reGul-r 9 dividend would have averaged a return of 6 3/4 over the past 'eight yearG. 111e technical l)a'tern on American Telephone remains favorable lith a posGible 105-172 indicat10n over the longer term. The 1937 . i3h was 190 and the 1946 high was,200. At 157, the stock is ceIling at about the average price of the last ten years. American Telephone common stock apflears to offer fair appreciation possibilitic8 toether with excellent defensive quat.t1es and a good ;yield .. It is an interesting investment' pu;'chase at this stage of the market pattern. EDlylUND W. TABELL WALSTON & CO. ,! , I'hh mav memotand\Jm II nol 10 bll have til' Interest In some C.OM;'\lIlC Of all O'f u .HI er or Ihe sec\.Irllin iohc.da 'on mentioned I ff h0erl1;1n I!tS 10 The fbouryego'rnCSJCdI ItmailnIarclscaeulCrauhtraeitsieosbrefinFnraolpmreCpllniadmreeISd 10 time by us Walston & Co, u a ma\'tr 01 omrloarmnyilllpOaI'roln'eGIr'I\the-eHQ'' not ,ntended to forecl5e Indtpendent ,nqu,rv I lb'd'P''i''mi''b''''''d'''''b''b,,,,,,,,,y,,mp,,,,,,,,,,,,,,,,,,,''', i !