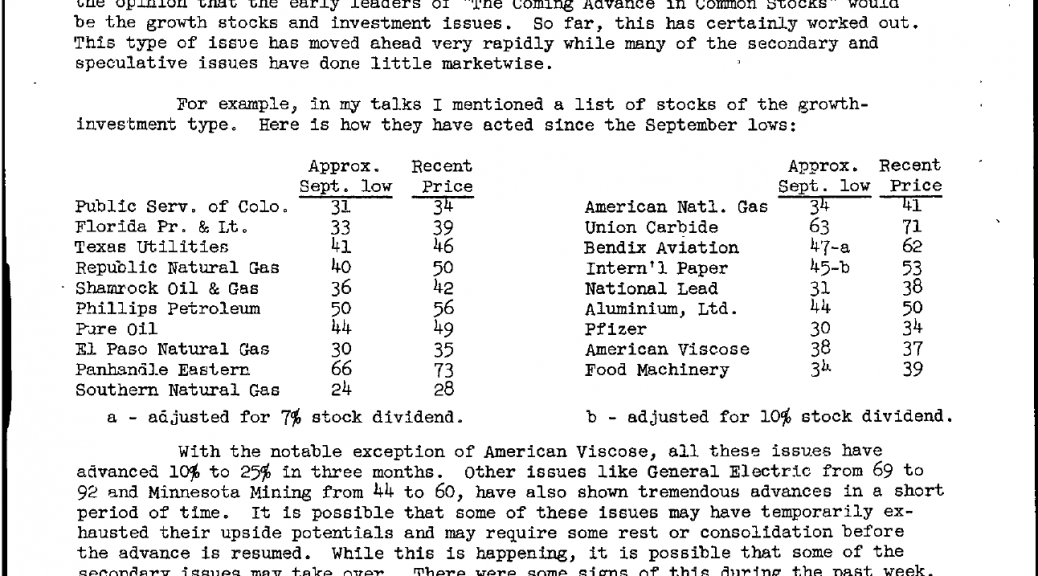 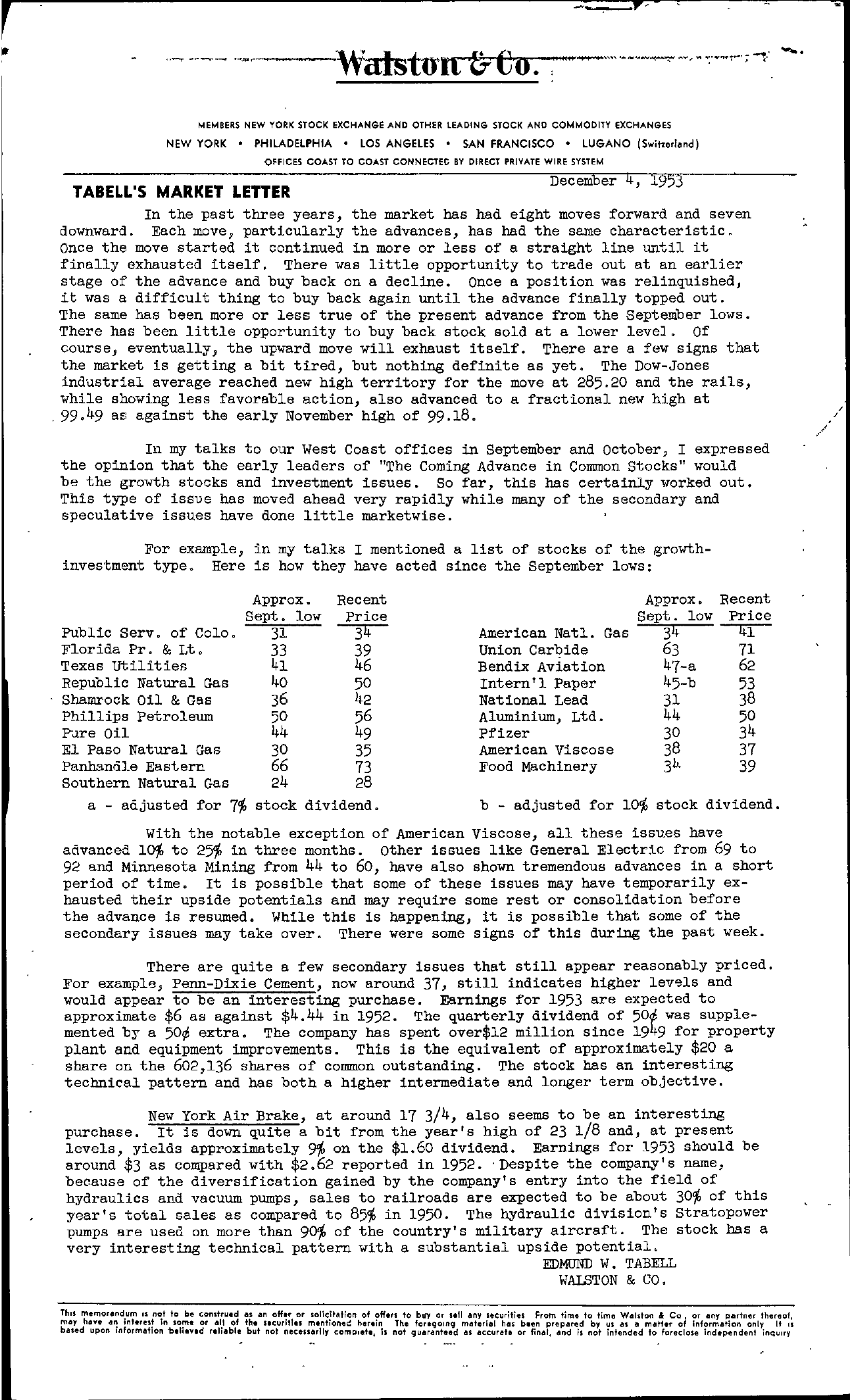 -. MEMBERS NEW YORK STOCK EXCHANGE AND OTHER LEADING STOCK AND COMMODITY eXCHANGES NEW YORK PHILADELPHIA LOS ANGELES SAN FRANCISCO LUGANO (SwH,Id I OFFICES COAST TO COAST CONNECTEC BY DIRECT PRIVATE WIRE SYSTEM TABELL'S MARKET LEnER December 4, 1953 In the past three years, the market has had eight moves forward and seven downward. Each move, particularly the advances, has had the same characteristic. Once the move started it continued in more or less of a straight line until it fially exhausted itself. There was little opportunity to trade out at an earlier stage of the advance and buy back on a decline. Once a position was relinquished, it was a difficult thing to buy back again until the advance finally topped out. The same has been more or less true of the present advance from the September lows. There has been little opportunity to buy back stock sold at a lower level. Of course, eventually, the upward move will exhaust itself. There are a few signs that the market is getting a bit tired, but nothing definite as yet. The Dow-Jones industrial average reached new high territory for the move at 285.20 and the rails, while showing less favorable action, also advanced to a fractional new high at ,99.49 as against the early November high of 99.18. In my talks to our West Coast offices in September and october, I expressed the opinion that the early leaders of The Coming Advance in Common Stocks would be the growth stocks and investment issues. So far, this has certainly worked out. This type of issue has moved ahead very rapidly while many of the secondary and speculative issues have done little marketwise. For example, in my talks I mentioned a list of stocks of the growthinvestment type. Here is how they have acted since the September lows Approx. Sept. low Public Servo of Colo. Florida Pro &Lt. 31 33 Texas Utilities 41 Republic Natural Gas 40 Shamrock Oil & Gas 36 Phillips Petroleum 50 P-clre Oil 44 El Paso Natural Gas 30 PanhandJ.e Eastern 66 Southern Natural Gas 24 Recent Price 34 39 46 50 42 56 49 35 73 28 a – adjusted for 7 stock dividend. Approx Recent Sept. low Price American Natl. Gas 34 41 Union Carbide 63 71 Bendix Aviation 4'7-a 62 Intern'l Paper 45-b 53 National Lead 31 38 Aluminium, Ltd. 44 50 Pfizer 30 34 American Viscose 38 37 Food Machinery 3L. 39 b – adjusted for 10 stock dividend. With the notable exception of American Viscose, all these issues have advanced 10 to 25 in three months. Other issues like General Electric from 69 to 92 and Minnesota Mining from 44 to 60, have also shown tremendous advances in a short period of time. It is possible that some of these issues may have temporarily exhausted their upside potentials and may require some rest or consolidation before the advance is resumed. While this is happening, it is possible that some of the secondary issues may take over. There were some signs of this during the past week. There are quite a few secondary issues that still appear reasonably priced. For example, Penn-Dixie Cement, now around 37, still indicates higher levels and would appear to be an interesting purchase. Earnings for 1953 are expected to approximate 6 as against 4.44 in 1952. The quarterly dividend of 50i was supple- mented by a 50 extra. The company has spent over12 million since 1949 for property plant and equipment improvements. This is the equivalent of approximately 20 a share on the 602,136 shares of common outstanding. The stock has an interesting technical pattern and has both a higher intermediate and longer term objective. New York Air Brake, at around 17 3/4, also seems to be an interesting purchase. It is down quite a bit from the year's high of 23 1/8 and, at present levels, yields approximately 9i on the 1.60 dividend. Earnings for 1953 should be around 3 as compared with 2.62 reported in 1952. 'Despite the company's name, because of the diversification gained by the company's entry into the field of hydraulics and vacuum pumps, sales to railroads are expected to be about 30 of this year's total sales as compared to 85 in 1950. The hydraulic division's Stratopower umps are used on more than 90 of the country's military aircraft. The stock has a very interesting technical pattern with a substantial upside potential. EDMUND W. TABELL WALSTON & CO. ThiS memornd.llm IS not to be construed as an offr or ,olktation of ffen to buy or ,ell any securities From time to time Waldon & Co, or any partner thereof, may have a,! Interes In soe or a1 of the Slcuntlu mentlone hereIn The 'ongoIng mlJtedal has been preplJfed by us as III maHer of Information only It II based upon InformatIon -beh..,ed relIable but not neceuarlly comp,ete, Is not guaranteed as aCCUflJte or finlJt, and is not intended to foreclose independent inqUiry / /