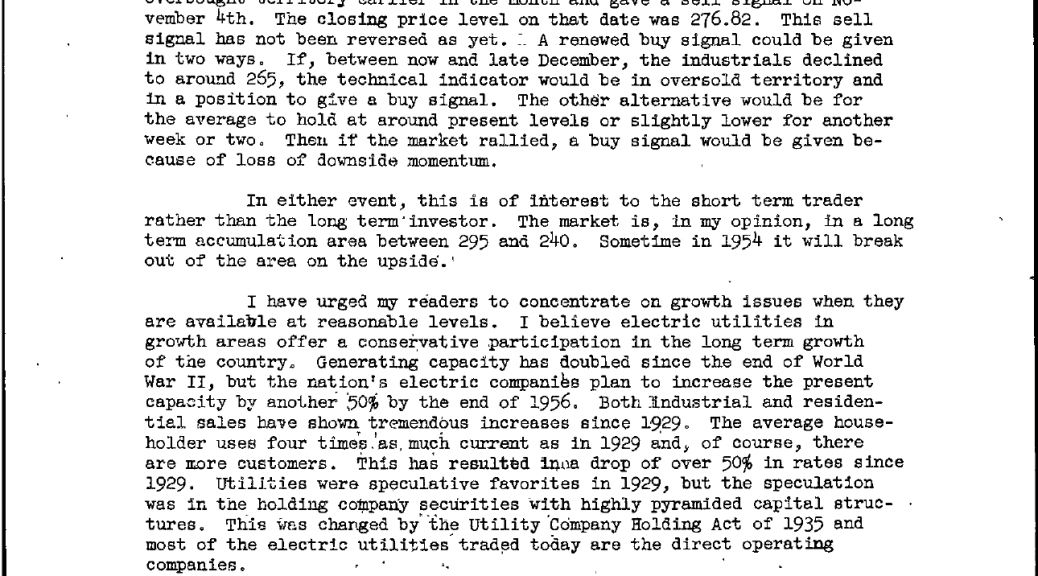 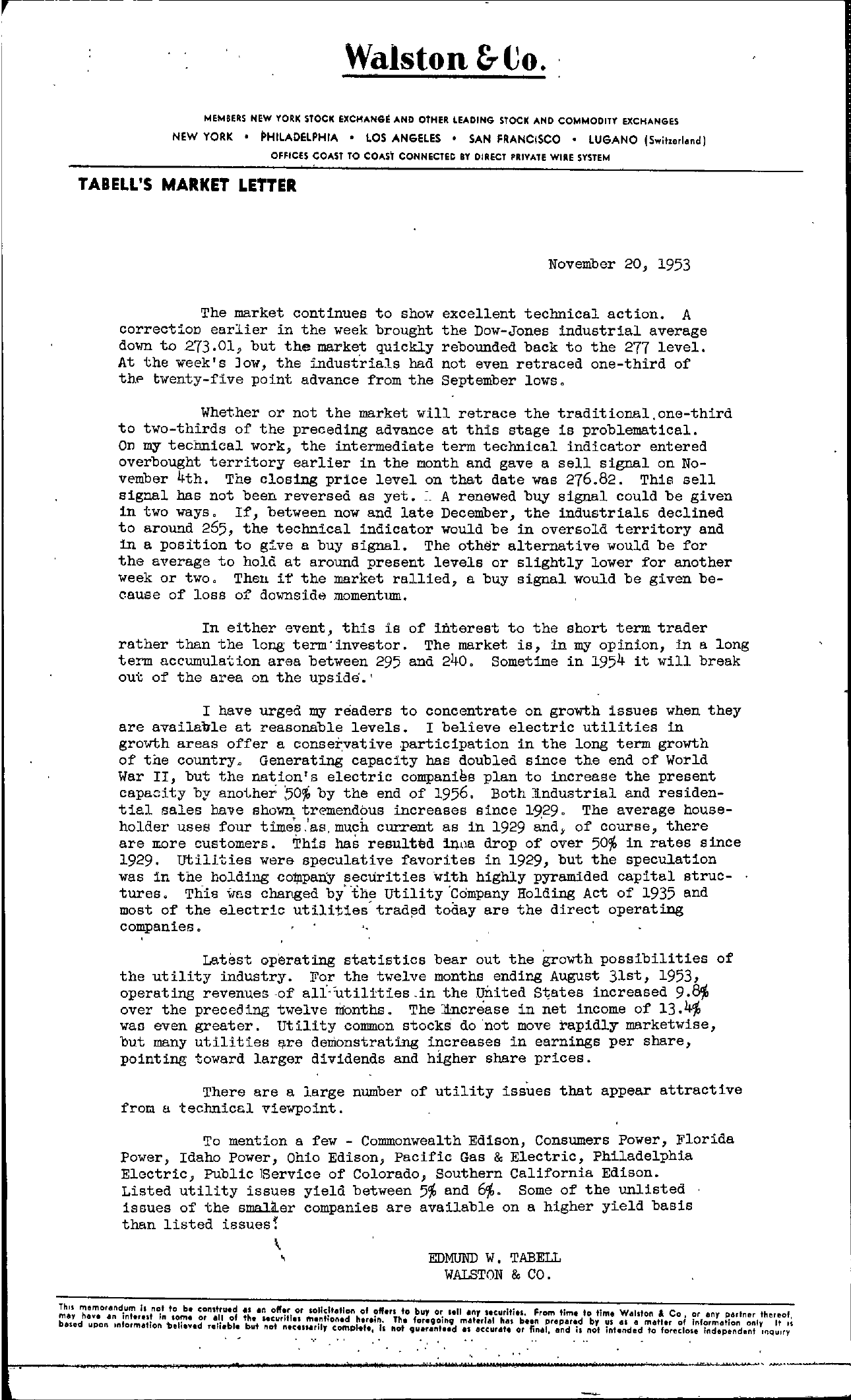 –r—— Walston &- Uo. MEMBeRS NEW vOlue STOCK EXCHNG AND otHER LEADING STOel( AND COMMODITY EXCHA.NGES NEW YORK PHILADELPHIA LOS ANGELES SAN FRANCISCO LUGANO (SH,.,landJ OFFICES COAST TO COAST CONNECTEC BY DIRECT PRIVATE WIRE SYSTEM TAB ELL'S MARKET LETTER November 20, 1953 The market continues to show excellent technical action. A correction earlier in the week brought the DOW-Jones industrial average down to 273.01, but the market quickly rebounded back to the 277 level. At the week's ow, the indust'rials had not even retraced one-third of thp twenty-five point advance from the September lows. Whet,her or not the market will retrace the tradit ional, one-third to two-thirds of the preceding advance at this stage is problematical. On my technical work, the intermediate term technical indicator entered overbought territory earlier in the month and gave a sell signal on November 4th. The closing price level on that date was 276.82. This sell signal has not been reversed as yet. A renewed buy signal could be given in two ways. If, between now and late December, the industria16 declined to around 265, the technical indicator would be in over601d territory and in a position to give a buy signal. The other alternative would be for the average to hold at around present levels or slightly lower for another week or two. Thell if' the market rallied, a buy signal would be given because of loss of downside momentum. In either event, this is of interest to the short term trader rather than the long term' investor. The market is, in my opinion, in a long term accumulation area between 295 and 240. Sometime in 1954 it will break out of the area on the upside.' I have urged my readers to concentrate on growh issues when they are available at reasonable levels. I believe electric utilities in growth areas offer a consevative participation in the long term growth of tue country. Generating capacity has doubled since the end of World War II, but the nation's electric companies plan to increase the present capacity by another 50 by the end of 1956. Both Xndustrial and residential sales have shown tremendous increases since 1929. The average householder uses four times,ats,much current as in 1929 a'nd, of course, there are ILOre customers. This has resulted u,(18 drop of over 50 in rates since 1929. utilIties were speculative favorites in 1929, but the speculation was in the holding copany securities with highly pyramided capital structures. This ,ms changed by the utility 'Company Holding Act of 1935 and most of the electric utilities'tradd today are the direct operating companies. Latest operating statistics bear out the Srowth possibilities of the utility industry. For the twelve months endir August 31st, 1953, operating revenues of all'utilities ,in the United S1;ates increased 9.8 over the preceaing twelve months. The lincrease in net income of 13.4 was even greater. Utility common stOCkS' do 'not move rapidly marketwise, but many utilities re demonstrating increases in earnings per share, pointing toward larger dividends and higher share prices. There are a large number of utility issues that appear attractive from a tecrJlicsl viewpoint. To mention a few – Commonwealth Edison, Consumers Power, Florida Power, Idaho Power, Ohio Edison, Pacific Gas & Electric, Philadelphia EIGctric, Public ervice of Colorado, Southern California Edison. Listed utility issues yield between 5 and 6. Some of the unlisted issues of the smalaer companies are available on a higher yield basis than listed issues! ,\ EDMUND W. TABELL WALSTON & CO.