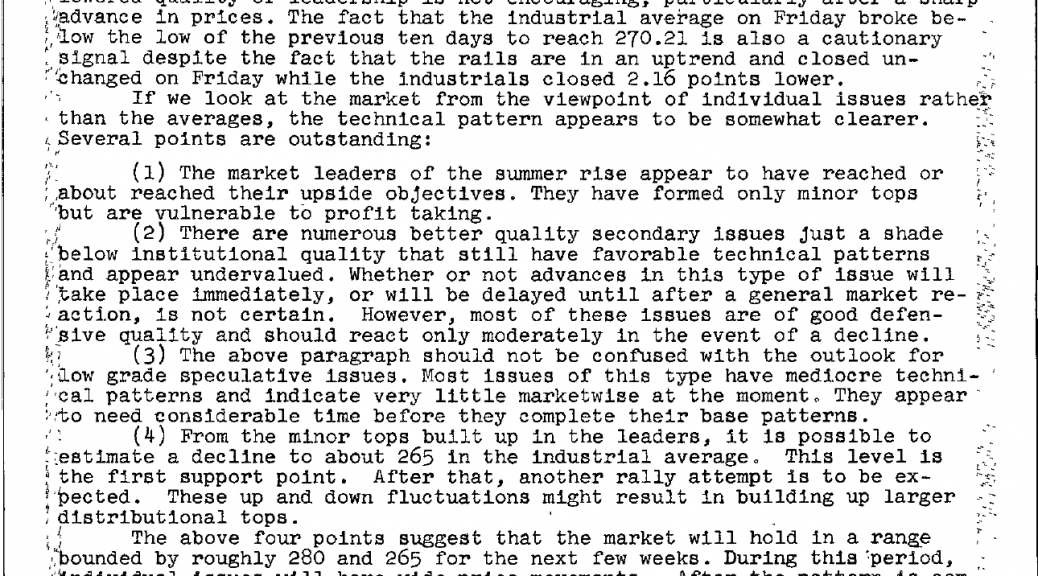 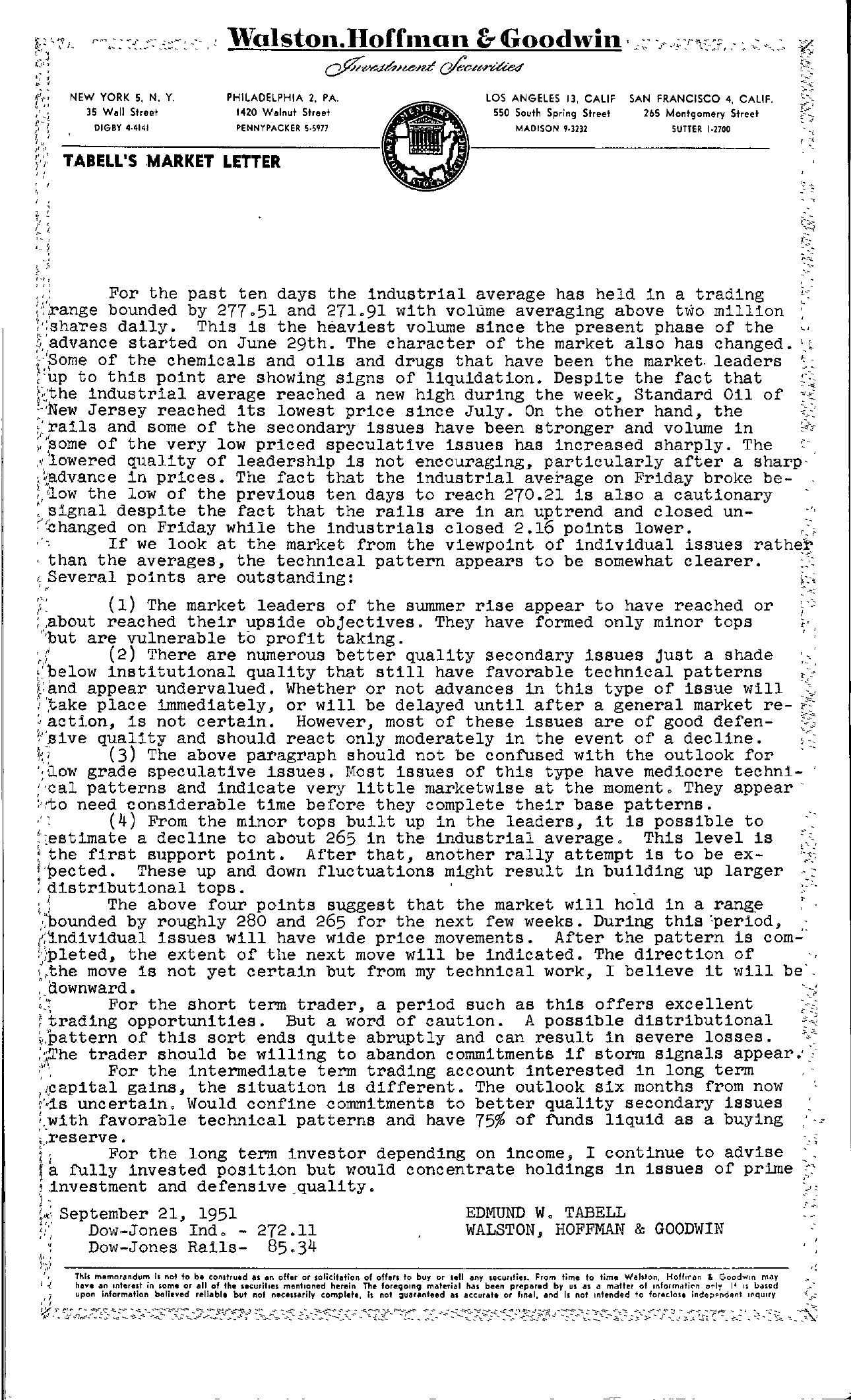 h'-,,' , NEW YORK 5. N. Y. t , 35 Wall Street i' I ' DIGBY 44141 PHILADELPHIA 2. PA 1420 Walnut Street PENNYPACKER 55977 I'' ;,'.,,. TABELL'S MARKET LETTER LOS ANGELES 13. CALIF 550 South Spring Street MADISON 9232 SAN FRANCISCO 4. CALIF. 2bS Montgomery Street SUTTER 12700 -, 1 1, . .- l. .. -,' '.',i For the past ten days the industrial average has held in a trading — irange bounded by 277.51 and 271091 with volume averaging above two million sha1'eS daily. This is the heaviest volume since the present phase of the ..advance started on June 29th. The character of the market also has changed. '. (ome of the chemicals and oils and drugs that have been the market. leaders 1, ;-up to this point are showing signs of liqUidation. Despite the fact that ;- the industrial average reached a new high during the week, Standard Oil of ,-,' -'New Jersey reached its lowest price since July. On the other hand, the c ;, rails and some of the secondary issues have been stronger and volume in C..',- ;. 'ome of the very low priced speculative issues has increased sharply. The .– ..,.lowered quality of leadership is not encouraging, particularly after a sharp- . ,advance in prices. The fact that the industrial average on Friday broke be- i.'low the low of the previous ten days to reach 270.21 is also a cautionary signal despite the fact that the rails are in an uptrend and closed un- -'. 'Changed on Friday while the industrials closed 2.16 pOints lower. .-i c If we look at the market from the viewpoint of individual issues rath than the averages, the technical pattern appears to be somewhat clearer. '- Several pOints are outstanding h ' ; (1) The market leaders of the summer rise appear to have reached or i-' ; .about reached their upside obJectives. They have formed only minor tops ,'. 'but are vulnerable to profit taking. .-f (2) There are numerous better quality secondary issues Just a shade ,,'. tbelow institutional quality that still have favorable technical patterns , t and appear undervalued. Whether or not advances in this type of issue will -,,, .) );ake place immediately, or will be delayed until after a general market re- ;!- actIon, is not certain. However, most of these issues are of good defen- 'sive quality and should react only moderately in the event of a decline. ;- , (3) The above paragraph should not be confused with the outlook for tI.ow grade speculative issues. Most issues of this type have mediocre techni- . cal patterns and indicate very little marketwise at the moment 0 They appear – ;to need considerable time before they complete their base patterns. , (4) From the minor tops built up in the leaders, it is possible to 'estimate a decline to about 265 in the industrial average. This level is ; the first support pOint. After that, another rally attempt is to be ex- Z; l;buti pd down fluctuations might result in building up larger ' The above four pOints suggest that the market will hold in a rane bounded by roughly 280 and 265 for the next few weeks. During this 'period, , Iindividual issues will have Wide price movements. After the pattern is com-to !')pleted, the extent of tile next move will be indicated. The direction of (the move is not yet certain but from my technical work, I believe it will be- downward. ; For the short term trader, a period such as this offers excellent ; trading opportunities. But a word of caution. A possible distributional ,/pattern of this sort ends quite abruptly and can result in severe losses. ', i,The trader should be willing to abandon commitments if storm signals appear.' ,- \. For the intermediate term trading account interested in long term ,tpapital gains, the situation is different. The outlook six months from now ls uncertain. Would confine commitments to better quality secondary issues ,with favorable technical patterns and have 75 of funds liquid as a buying , ,,' ;1.',res er ve. For the long term investor depending on income, I continue to advise ! a fully invested position but would concentrate holdings in issues of prime .' .; investment and defenSive ,quality. ,. ,… September 21, 1951 ;', Dow-Jones Ind. 272.11 EDMUND W. TABELL WALSTON, HOFFMAN & GOODWIN ., Dow-Jones Rails- 85.34 II,.',, '1 , i This memorandum is not to be construld as tIIIn offer or solicitation of offlHS to buy or lell any 'llcuritiel. From time to lime Walston, Hofftrlln & GoodWin may have an Interest in some or all of the curliles mentioned herein The foreqolnCiJ material has been prepared by us 11 a matter of Informdfitn OTly I' IS based .7 upon information believed reliable but not neceuarily complete, Is not ;uIITanteed .III accurate or final, and is not Intended to forec;1os1 inde;)f'ndnnt lIqulry i;i, -,,,.'' '.;.',-'..;—;;;-,.,..'J..,.;!'J/ ',,,- 2..',.–….;., ,-r..;X'Y,-, ',,-;.';..'';',-.',;;- ',.;'',–;,,'–,''',.!';.''7.', ..', '''- '- ,,'i.;; -.-