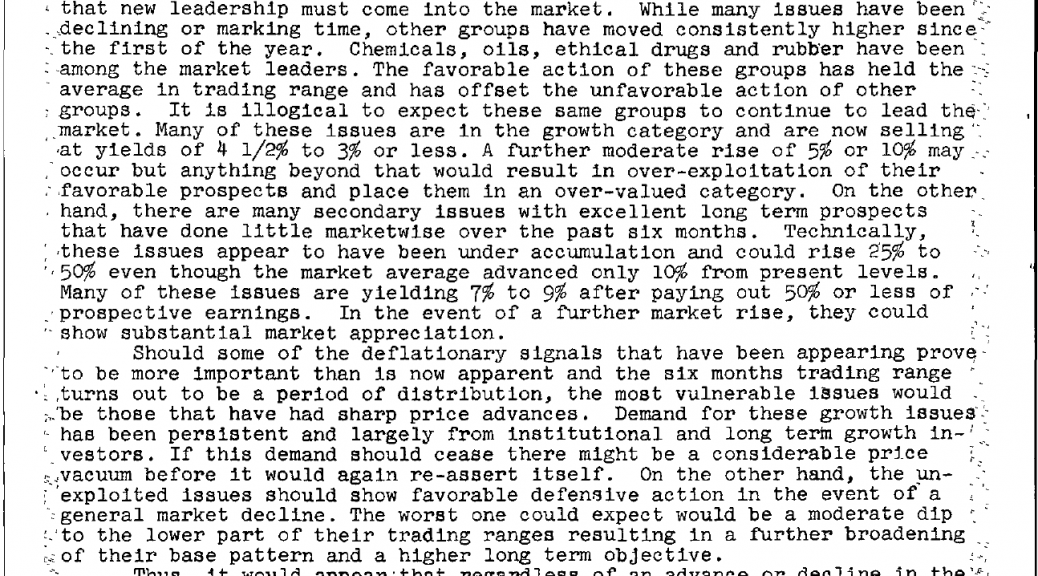 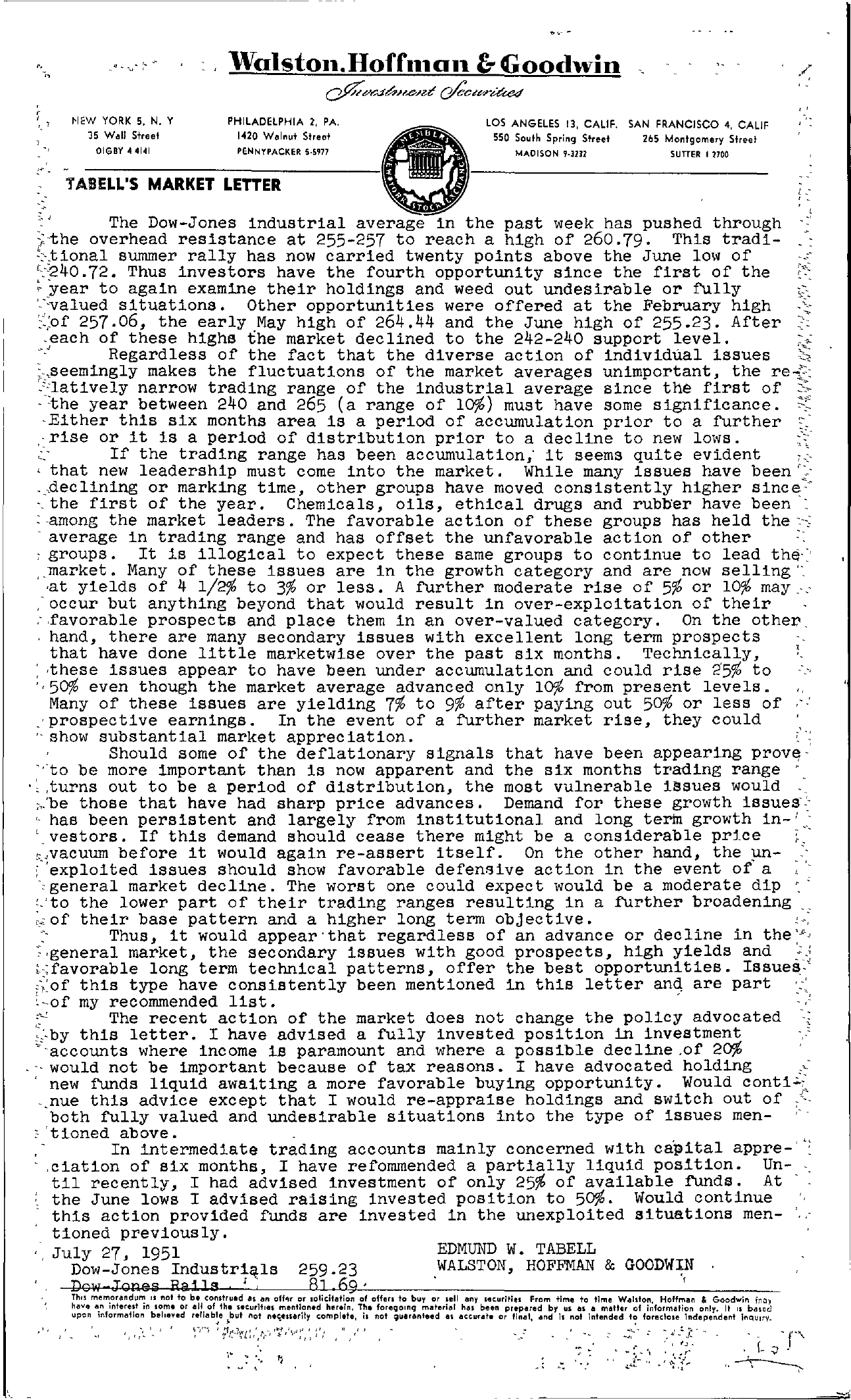 Wolsfon.Hoffnl0n &- Goodwin lEW YORK 5, N. Y ',7 35 Wall Street DIGBY 44141 PHILADELPHIA 2, PA. 1420 Wlnut Street PENNYPACKER SS977 rADEll'S MARKET lETTER LOS ANGELES 13, CALIF. SAN FRANCISCO 4, CALIF 550 South Spring Street 265 Mont90mery Sired MADISON '13211 SUTTER 12700 ,' The Dow-Jones industrial average in the past week has pushed through ;-the overhead resistance at 255-257 to reach a high of 260.79. This tradi- 'tional summer rally has now carried twenty points above the June low of ('240.72. Thus investors have the fourth opportunity since the first of the ;0 ;. year to again examine their holdings and weed out undesirable or fully ,-. 'Valued situations. Other opportunities were offered at the February high , ',of 257.06, the early May high of 264.44 and the June high of 255.23. After , .each of these highs the market declined to the 242-240 support level. –.' Regardless of the fact that the diverse action of individual issues ;,seemingly makes the fluctuations of the market averages unimportant, the re;; .latively narrow trading range of the industrial average since the first of . the year between 240 and 265 (a range of 10) must have some significance. ;c. Either this six months area is a period of accumulation prior to a further .; .- rise or it is a period of distribution prior to a decline to new lows. ;';' ,- If the trading range has been accumulation; it seems quite evident ;.. , that new leadership must come into the market. While many issues have been . ..,declining or marking time, other groups have moved consistently higher since– .the first of the year. Chemicals, Oils, ethical drugs and rubber have been among the market leaders. The favorable action of these groups has held the average in trading range and has offset the unfavorable action of other '. ; groups. It is illogical to expect these same groups to continue to lead the-' ,.market. Many of these issues are in the growth category and are now selling' ,at yields of 4 1/2 to 3 or less. A further moderate rise of 5 or 10 may.-.- occur but anything beyond that would result in over-exploitation of their ; ,favorable prospects and place them in an over-valued category. On the other hand, there are many secondary issues with excellent long term prospects that have done little marketwise over the past six months. Technically, ,these issues appear to have been under accumulation and could rise 25 to . 50 even though the market average advanced only 10 from present levels. Many of these issues are yielding 7 to 9 after paying out 50 or less of -,prospective earnings. In the event of a further market rise, they could .. show substantial market appreCiation. Should some of the deflationary signals that have been appearing prov ,to be more important than is now apparent and the six months trading range . ,turns out to be a period of distribution, the most vulnerable issues would '. ;,be those that have had sharp price advances. Demand for these growth issues'' '. has been persistent and largely from institutional and long terin growth in-'. '. vestors. If this demand should cease there might be a considerable prlce ;.' ,,-,vacuum before it would again re-assert itself. On the other hand, the In- ..' 'exploited issues should show favorable defenive action in the event of a ' general market decline. The worst one could expect would be a moderate dip . ,-,to ;,; of the lower part of their trading their base pattern and a higher ranges resulting in a long term objective. further broadening .. . Thus, it would appearthat regardless of an advance or decline in the' ,general market, the secondary issues with good prospects, high yields and .-; ;.;favorable long term technical patterns, offer the best opportunities. Issues' ,of this type have consistently been mentioned in this letter and are part '.-', ' .. of my recommended list. ;' The recent action of the market does not change the policy advocated , ;.by this letter. I have advised a fully invested position in investment 'accounts where income is paramount and where a possible decline .of 20 .would not be important because of tax reasons. I have advocated holding ' , new funds liquid awaiting a more favorable buying opportunity. Would conti';',. .. nue this advice except that I would re-appraise holdings and switch out of ; both fully valued and undesirable situations into the type of issues men- . 'tioned above. . , In intermediate trading accounts mainly concerned with capital appre-' ' . ,ciation of six months, I have refommended a partially liquid position. Un-. til recently, I had advised investment of only 25 of available funds. At , the June lows I advised raising invested position to 50. Would continue this action provided funds are invested in the unexploited situations men- tioned previously. July 27, 1951 Dow-Jones Industrils 259.23 Dow-Joll.elil Bails, ; ; 81 69' EDMUND W. TABELL WALSTON, HOFFMAN & GOODWI.,N ' Thu mem.orandll II not to be construed as an offlr or IOlieltati,on of offen to buy or ell any ulcurities From time to time Wahton, Hoffman & Goodwin rntl) have a.n Intere!t In some or fiJI, of th ncurltlU mentioned herein, Th. foregOing material h.u been prepared b)' us as a matter of information onl)'. It IS based up-on information behe….d rerlabe J.but not nec;,euarily compl,te, It not ;uaranteed as flccurat. or finfll, nd is not int.nd.d t foreclose lndependent inqulrv. ,. ''''; I !7,tL,',,,';!,';',', ',' ' . , ' . ' ,– ';,;. '. T', , '1 . . ,rf– ,. . -;J . ,. .