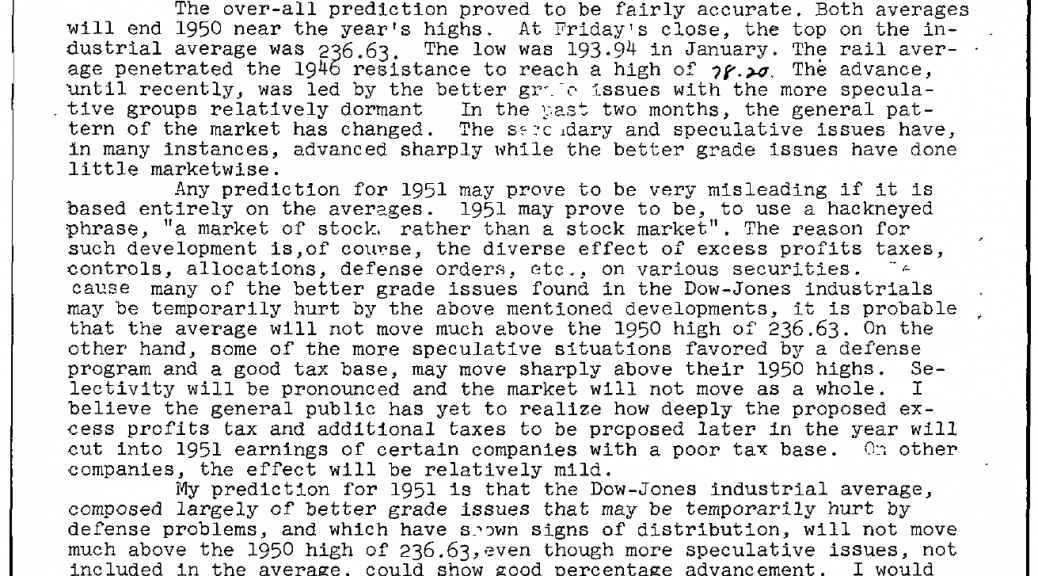 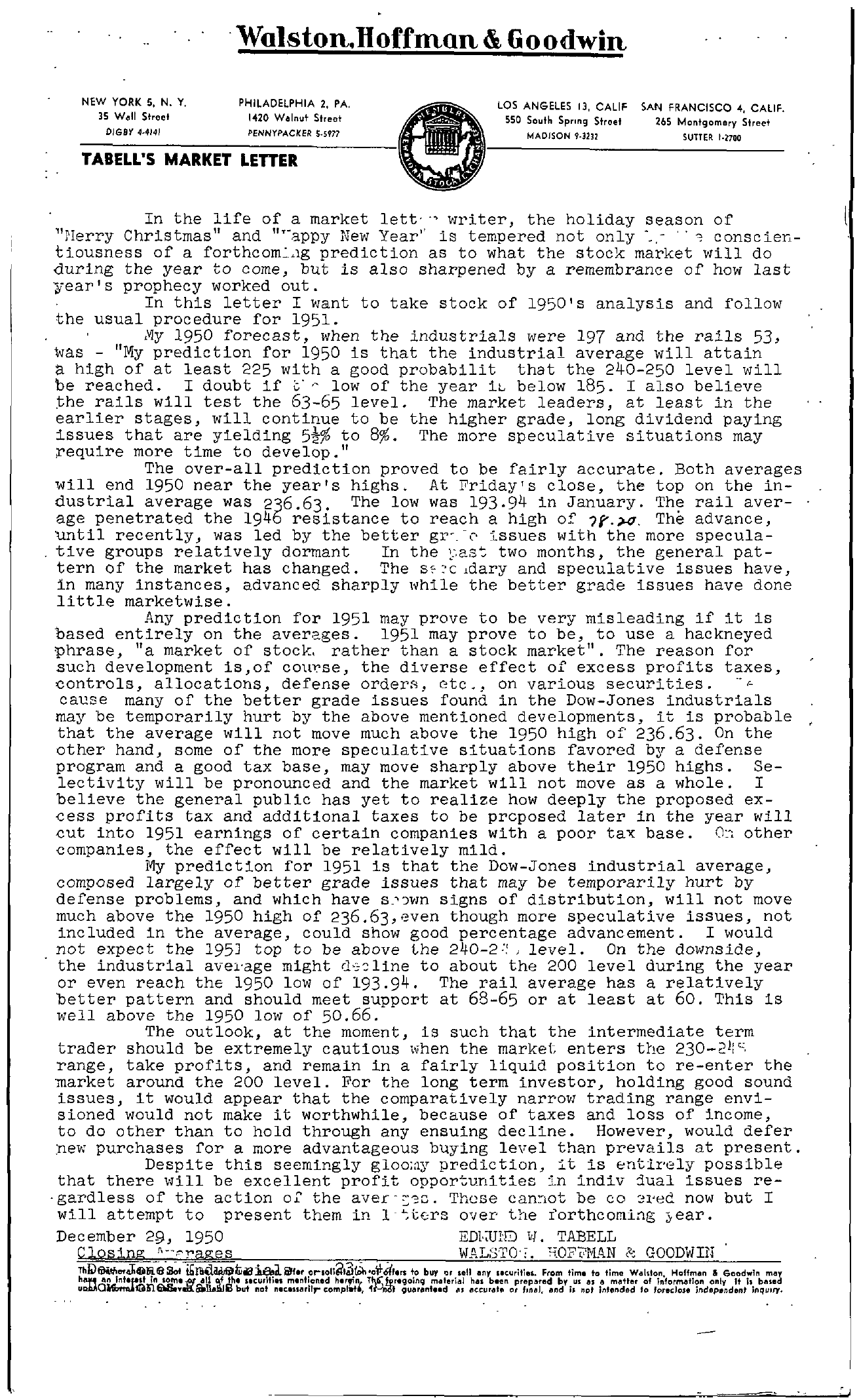 .Walston,Hoffman &Goodwin NEW YORK 5, N. Y. 35 WaH Stree' DIGBY 4-4141 PHILADELPHIA 2, PA. 1420 Wlnut Street PENNYPACKER !i-5917 TABELL'S MARKET LETTER LOS ANGELES 13, CAliF 550 South Spring Street MADISON 9322 SAN FRANCISCO 4, CALIF. 265 Montgomery Street SUTTER '2700 In the life of a market lett, writer, the holiday season of Ilerry Christmas and ''''appy New Year is tempered not only '.. – ,. conscien- tiousness of a forthcom''.lg prediction as to what the stock market will do during the year to come, but is also sharpened by a remembrance of how last ear's prophecy worked out. In this letter I want to take stock of 1950's analysis and follow the usual procedure for 1951. ,VIy 1950 forecast, when the industrials were 197 and the rails 53, was – My prediction for 1950 is that the industrial average will attain a high of at least 225 with a good probabilit that the 240-250 level will be reached. I doubt if c' low of the year it, below 185. I also believe the rails will test the 63-65 level. The market leaders, at least in the earlier stages, will continue to be the higher grade, long dividend paying issues that are yielding 5 to 8. The more speculative situations may ;t'equire more time to develop. The over-all prediction proved to be fairly accurate. Both averages will end 1950 near the year's highs. At Friday's close, the top on the industrial average was 236.63. The low was 193.94 in January. Th rail average penetrated the 1946 resistance to reach a high of r.. The advance, until recently, was led by the better gr'. -c, Lssues with the more speculative groups relatively dormant In the ;.'a,3 two months, the general pattern of the market has changed. The scc ,dary and speculative issues have, in many instances, advanced sharply while the better grade issues have done little marketwise. Any prediction for 1951 may prove to be very misleading if it is based entirely on the aver,.ges. 1951 may prove to be, to use a hackneyed phrase, a market of stock, rather than a stock market, The reason for such development is,of couse, the diverse effect of excess profits taxes, controls, allocations, defense orders, tc., on various securities. .. cause many of the better grade issues found in the Dow-Jones industrials may be temporarily hurt by the above mentioned developments, it is probable that the average will not move much above the 1950 high of' 236,63. On the other hand, some of the more speculative situations favored by a defense program and a good tax base, may move sharply above their 1950 highs. Selectivity will be pronounced and the market will not move as a whole. I believe the general public has yet to realize how deeply the proposed excess profits tax and additional taxes to be proposed later in the year will -cut into 1951 earnings of certain companies with a poor tax base. 01 other companies, the effect will be relatively mild. My prediction for 1951 is that the Dow-Jones industrial average, composed largely of better grade issues that may be temporarily hurt by defense problems, and which have s.'wn signs of distribution, will not move much above the 1950 high of 236.63,8ven though more speculative issues, not included in the average, could show good percentage advancement. I would not expect the 195J top to be above the 240-2 ,' ,level. On the downside, the industrial avel'age might dc line to about the 200 level during the year or even reach the 1950 low of 193.94. The rail average has a relatively better pattern and should meet support at 68-65 or at least at 60. This is well above the 1950 low of 50.66. The outlook, at the moment, is such that the intermediate term trader should be extremely cautious when the market enters the 230-21, range, take profits, and remain in a fairly liquid position to re-enter the market around the 200 level. For the long term investor, holding good sound issues, it would appear that the comparatively narrow trading range envisioned would not make it worthwhile, because of taxes and loss of income, to do other than to hold through any ensuing decline. However, would defer neVi purchases for a more advantageous buying level than prevails at present. Despite this seemingly gloo;ay prediction, it is entlr'ely possible that there will be excellent profit opportunities in indiv jual issues re- gardless of the action or the aver'c. These canot be co 3ed now but I will attempt to present them in l'';\;rs over the forthcoming ;year. December 29, 1950 EDl-JH8 111. TABELL Closing '''''rages WALSTO. ';OP(iJ';lI\.N & GOODWIll ThIiti(lfaert'.JdiIIl7iG'; ibn.iadJ6ltia'i&liilf., cr'lolIEti.ol4-6Jr.rl to buy or sell any ,.curiti.s From tim. to time Waldon. Hoffman & GoodwTn may uhD&..hRAOAioi!ftodnein.slO.vrn..a-PtDI ,n,11.flfISthebuStlcnuortltinecmesesna',lloInrecdomhp.ln.l, 11\6' f9(.goillg mater; 1MOl 9ua,anfd al ho!ll been prep,ned b., UI as accurat 01 'lnal, and iJ not maHer of information only It is baled Intended to 'oredOJ.e independent lnqulfY. 1