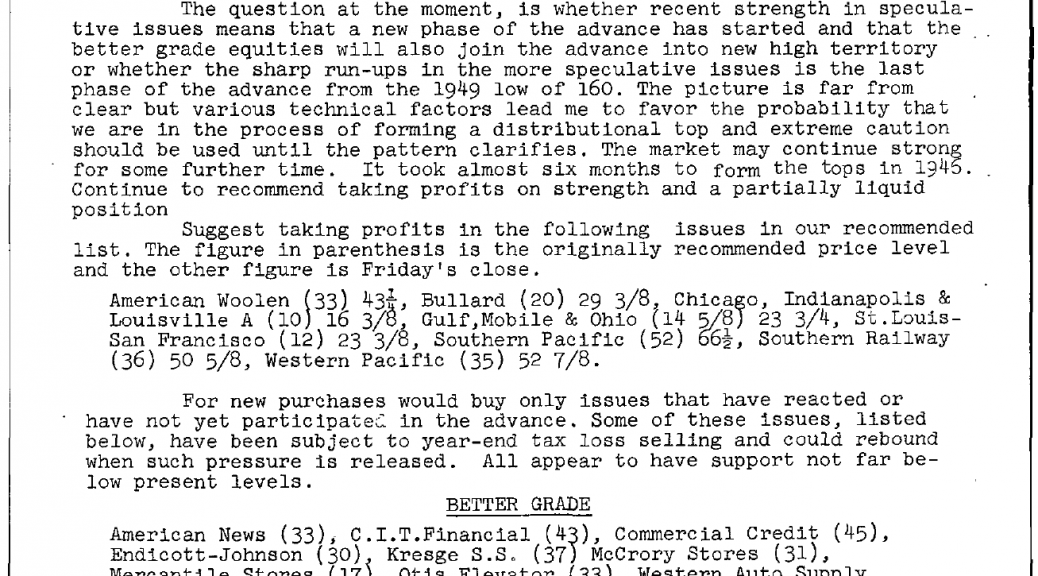 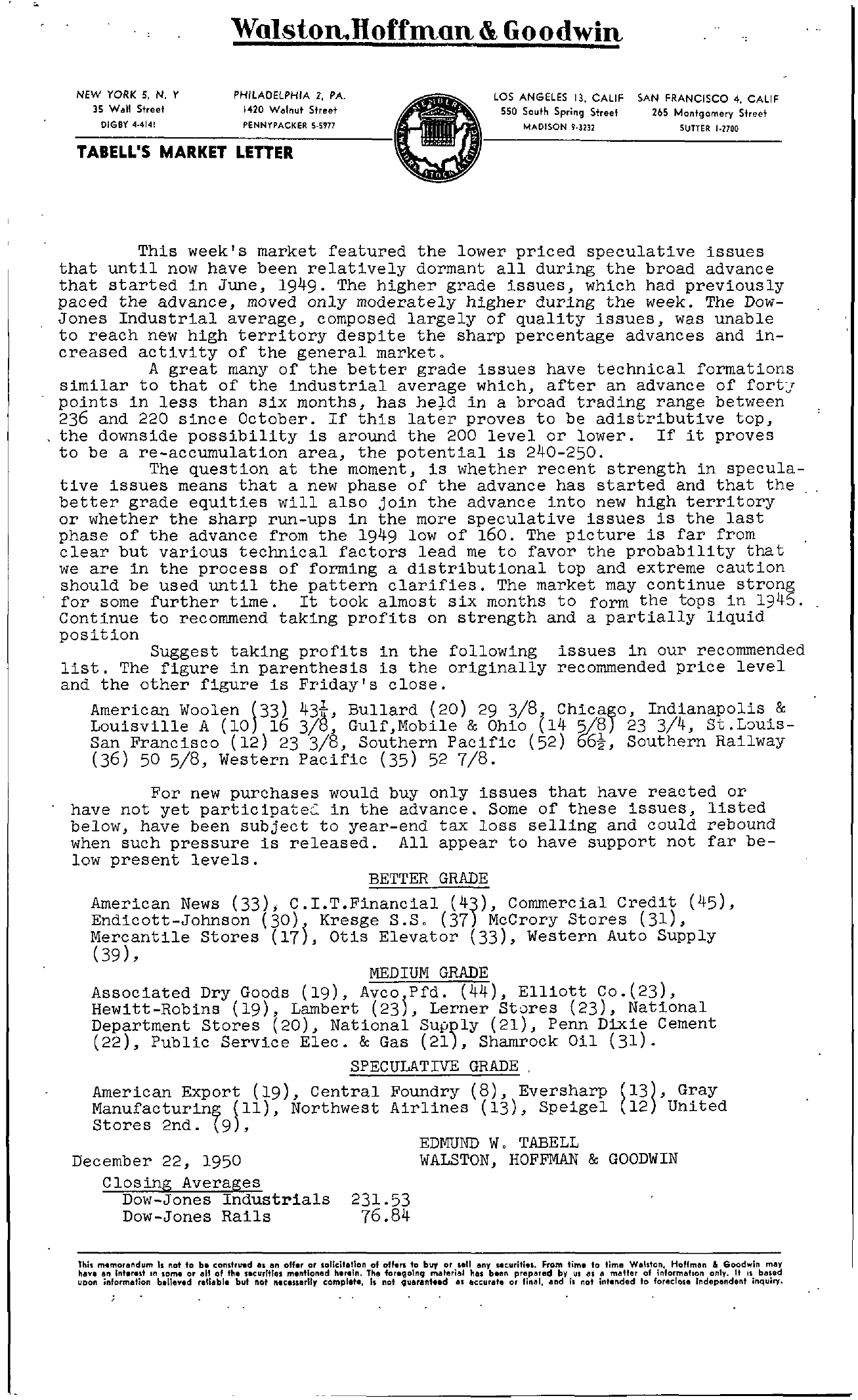 Walston.Hoffman &, Goodwin NEW YORK 5, N. Y 35 Wall Street DIGBY 1141111 PHILADELPHIA Z, PA. 1420 Wlnut Street PENNYPACKER 55977 TABELL'S MARKET LETTER LOS ANGELES 13. CALIF 550 South Spring Street MADISON 9l232 SAN FRANCISCO 4. CALIF 265 Montgomery Street SUTTER 11100 This week's market featured the lower priced speculative issues that until now have been relatively dormant all during the broad advance that started in June, 1949. The higher grade issues, which had previously paced the advance, moved only moderately higher during the week. The DowJones Industrial average, composed largely of quality issues, was unable to reach new high territory despite the sharp percentage advances and increased activity of the general market. A great many of the better grade issues have technical formations similar to that of the industrial average which, after an advance of forty pOints in less than six months, has heJd in a broad trading range between 236 and 220 since October. If this later proves to be adistributive top, the downside possibility is around the 200 level or lower. If it proves to be a re-accumulation area, the potential is 240-250. The question at the moment, is whether recent strength in specula- tive issues means that a new phase of the advance has started and that the better grade equities will also join the advance into new high territory or whether the sharp run-ups in the more speculative issues is the last phase of the advance from the 1949 low of 160. The picture is far from clear but various technical factors lead me to favor the probability that we are in the process of forming a distributional top and extreme caution should be used until the pattern clarifies. The market may continue strong for some further time. It took almost six months to form the tops in 1945. Continue to recommend taking profits on strength and a partially liquid position Suggest taking profits in the following issues in our recommended list. The figure in parenthesis is the originally recommended price level and the other figure is Friday's close. American Woolen (33) 43t, Bullard (20) 29 3/8, Chicao, Indianapolis & Louisville A (10) 16 3/, Gulf,Mobile & Ohio (14 5/8) 23 3/4, St.Louis- San Francisco (12) 23 3/8, Southern Pacific (52) b6, Southern Railway (36) 50 5/8, Western Pacific (35) 52 7/8. For new purchases would buy only issues that have reacted or have not yet partic1pateC in the advance. Some of these issues, listed belOW, have been subject to year-end tax loss selling and could rebound when such pressure is released. All appear to have support not far below present levels. BETTER GRADE American News (33), C.I.T.Financial (43), Commercial Credit (45), Endicott-Johnson (30) Kresge S.S. (37) McCrory Stores (31), Mercantile Stores (17j, Otis Elevator (33), Western Auto Supply (39), MEDIUM GRADE Associated Dry Hewitt-Robins Goods (19), (19), Lambert A(v2co3,PfdL.er (44), Elliott Co.(23), ner Stores (23), Natio nal Department Stores (20), National Suply (21), Penn Dixie Cement (22), Public Service Elec. & Gas (21), Shamrock Oil (31). SPECULATIVE GRADE , American Export (19), Central Foundry (8), Eversharp (13), Gray Manufacturin (11), Northwest Airlines (13), Speigel (12) United Stores 2nd. (9), December 22, 1950 EDMUND W. TABELL WALSTON, HOFFMAN & GOODWIN Closing Averages Dow-Jones Industrials 231.53 DOW-Jones Rails 76.84 This memorandum II not to be condrnd fli an offer or sollcitetlon of offen to buy or ull eny UlcurHies. From tirne to time Walston, Hoffman & Goodwin may have en Intered In some or all of th securities mentioned hereIn. The fore\1olnq malerial has been prepared by us as a matter of information only. It IS based UDon information b.lleved reliable but not ece,sarlly complete, Is not queran..ed al accurate or final, and iI not intended to foreclose Independent inquiry.