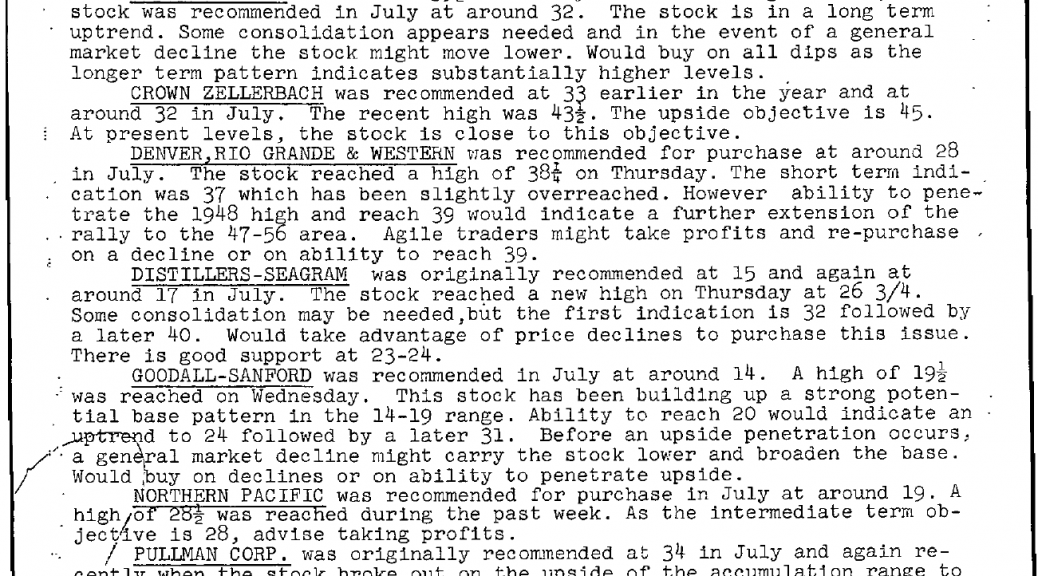 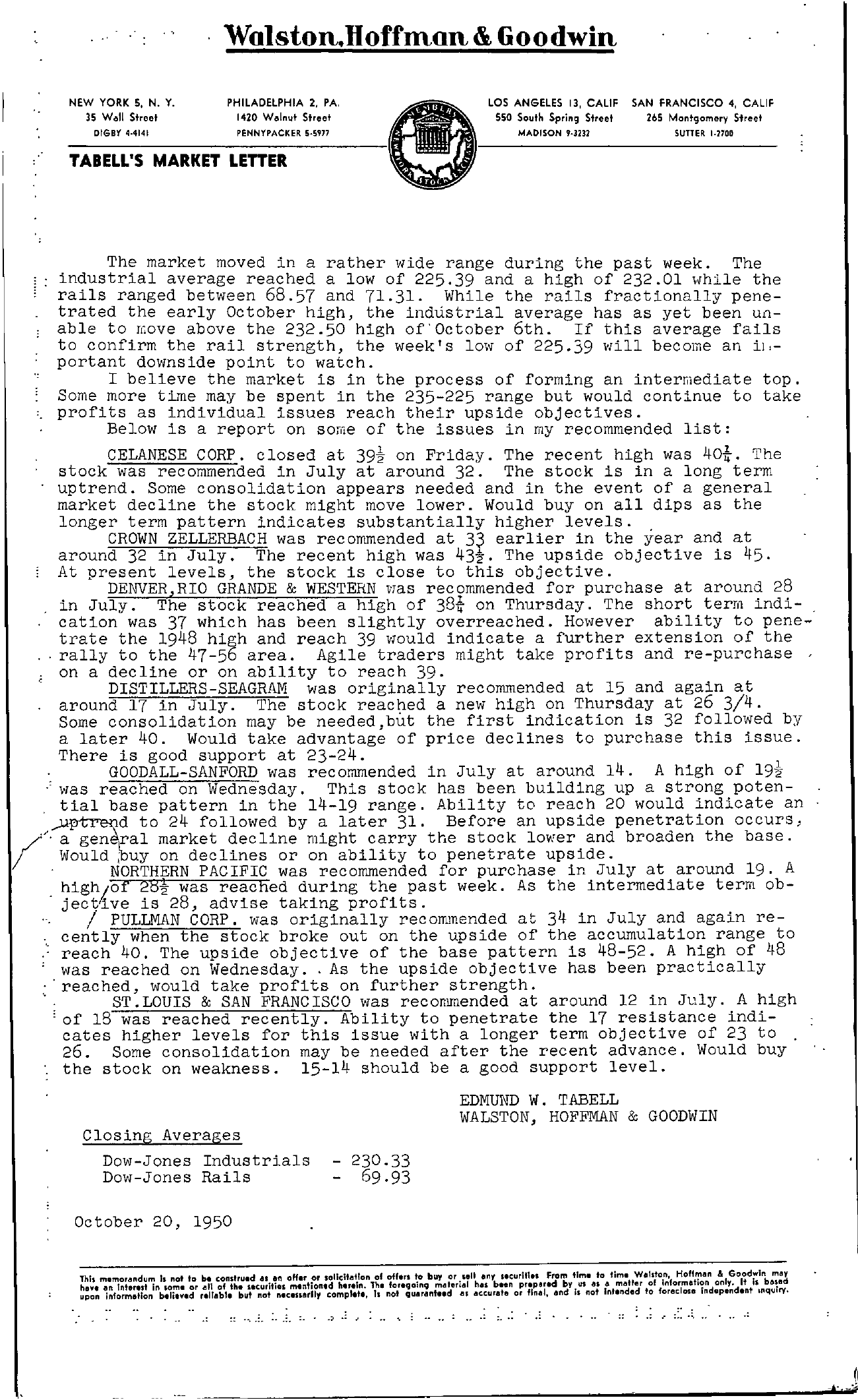 . Walston.Hoffman &, Goodwin NEW YORK 5, N, y, 35 WaH Street DIGBY 44141 PHILADelPHIA 2, PA. 1420 Walnut Street PENNYPACKER 55'77 TAB ELL'S MARKET LETTER LOS ANGELES 13, CALIF 550 South Spring Street MADISON '3232 SAN FRANCISCO 4, CALIF 2bS Montgomery Street sunER 12700 The market moved in a rather wide range during the past week. The industrial average reached a low of 225.39 and a high of 232.01 IIhile the rails ranged between 68.57 and 71.31. While the rails fractionally penetrated the early October high, the industrial average has as yet been un- able to move above the 232.50 high oCOctober 6th. If this average fails to confirm the rail strength, the week's low of 225.39 will become an i1,portant downside point to watch. I believe the market is in the process of forming an intermediate top. Some more time may be spent in the 235-225 range but would continue to take profits as individual issues reach their upside objectives. Below is a report on some of the issues in my recommended list CELANESE CORP. closed at 39t on Friday. The recent high was 40. The stock was recommended in July at around 32. The stock is in a long term uptrend. Some consolidation appears needed and in the event of a general market decline the stock might move lower. Would buy on all dips as the longer term pattern indicates substantially higher levels. CROWN ZELLERBACH was recommended at 3 earlier in the year and at around 32 in July. The recent high was 432 . The upside objective is 45. At present levels, the stock is close to this objective. DElTER,RIO GRANDE & WESTERN ViaS recommended for purchase at around 28 in July. The stock reached a high of 38 on Thursday. The short term indi- cation was 37 which has been slightly overreached. However ability to pene- trate the 1948 high and reach 39 would indicate a further extension of the rally to the 47-56 area. Agile traders might take profits and re-purchase on a decline or on ability to reach 39. DISTILLERS-SEAGRAM was originally recommended at 15 and again at around 17 in July. The stock reached a new high on Thursday at 26 3/4. Some consolidation may be needed,but the first indication is 32 followed by a later 40. Would take advantage of price declines to purchase this issue. There is good support at 23-24. GOODALL-SANFORD was recommended in July at around 14. A high of 19t 'was reached on Wednesday. This stock has been building up a strong poten- . tial base pattern in the 14-19 range. Ability to reach 20 would indicate an ,uptreQd to 24 followed by a later 31. Before an upside penetration occurs, '/' a general market decline might carry the stock 10Vier and broaden the base. / Would ;bUy on declines or on ability to penetrate upside. , NORTHERN PACIFIC was recommended for purchase in July at around 19. A high/of' 28 was reached during the past week. As the intermediate term ob- ject1ve is 28, advise taking profits. / PULLMAN CORP. was originally recorrended at 34 in July and again re- cently when the stock broke out on the upside of the accumulation range to ., reach 40. The upside objective of the base pattern is 48-52. A high of 48 was reached on Wednesday. ' As the upside objective has been practically ,'reached, would take profits on further strength . ., ST. LOUIS & SAN FRANC ISCO was recommended at around 12 in July. A high 'of 18 was reached recently. Ability to penetrate the 17 resistance indi- cates higher levels for this issue with a longer term objective of 23 to 26. Some consolidation may be needed after the recent advance. Would buy the stock on weakness. 15-14 should be a good support level. Closing Averages Dow-Jones Industrials – 230.33 Dow-Jones Rails 69.93 EDMUND W. TABELL WALSTON, HOFFMAN & GOODWIN October 20, 1950 This mltmordndum Is not to b. construed a. an oHe, -or solicitation of offers to buy or sell any 'ecurltles From time to tim. Walston, Hoflman & Goodwin may hue an Inte…1f in some or /!Ill of Ih. securities mentioned herein. lh. lore901n9 material has be.n prepared by us as a matter of information only. It is based upon Information beli.ved reliable but not necenatlly compl.te, 11 not QU/!Irant..d /!IS accurate at final, and Is not Intended to forecloso Independent Inquiry, .. , .. . . .. ., —