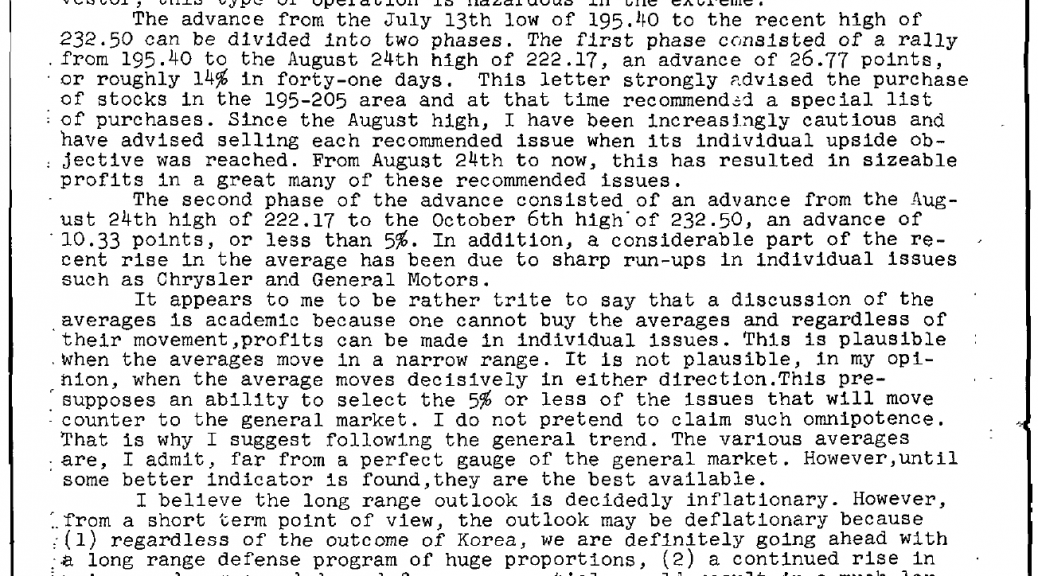 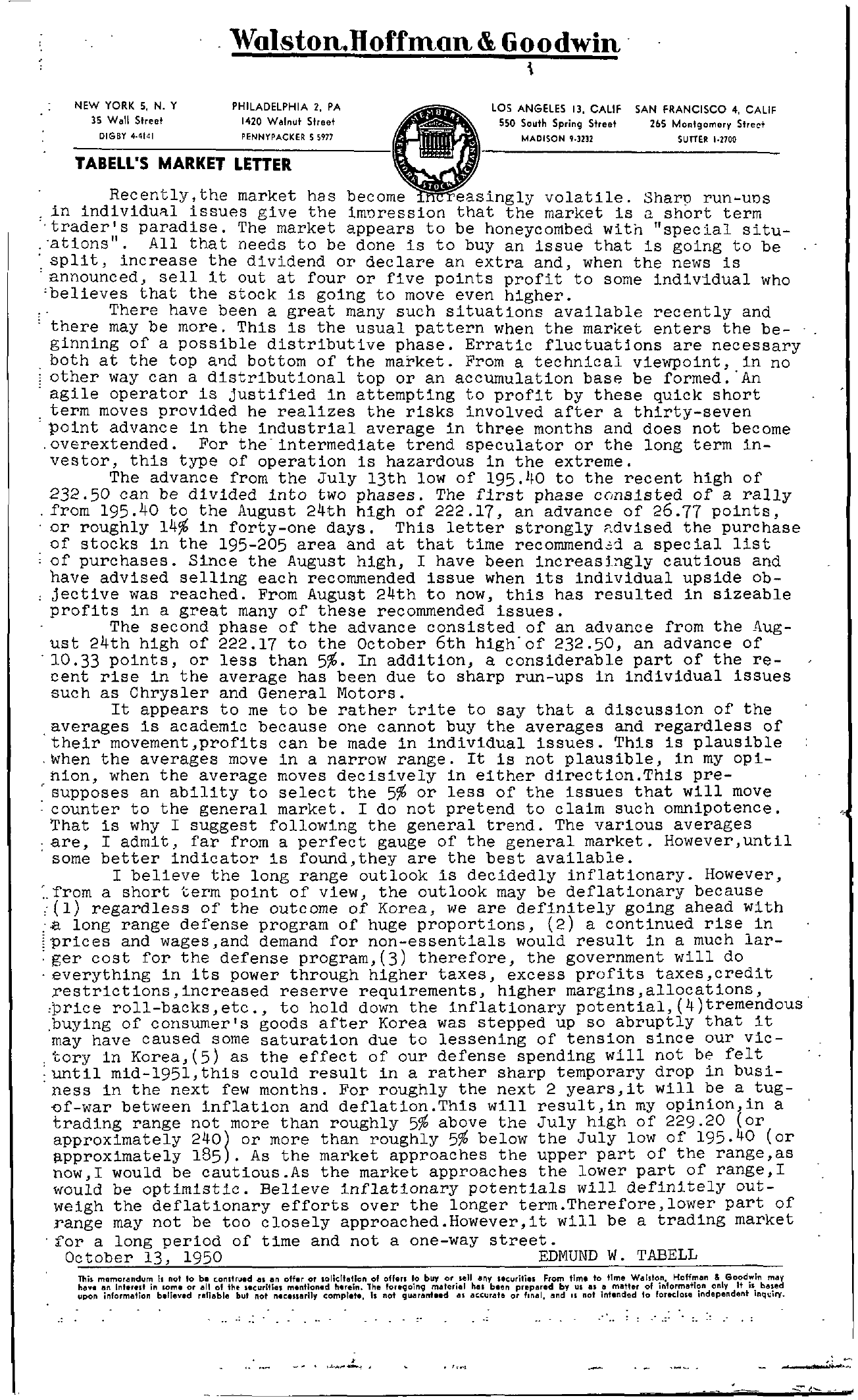 Walston.Hoffman &, Goodwin' \ NEW YORK 5. N, Y 35 Wall Street DIGBY 4.4141 PHILADELPHIA 2. PA 1420 Walnut Street PENNYPACKER 55977 TABEll'S MARKET lETTER LOS ANGELES 13. CALIF 550 South Spring Street MADISON 93232 SAN FRANCISCO 4. CALIF 2bS Montgomery Street SUnER 12700 Recently,the market has ly volatile. SharD run-UDS in individuRl issues give the market is a short term trader's paradise. The market appears to be honeycombed with spec ial situ- ,'ations. All that needs to be done is to buy an issue that is going to be split, increase the dividend or declare an extra and, when the news is 'announced, sell it out at four or five pOints profit to some individual who 'believes that the stock is going to move even higher. There have been a great many such situations available recently and there may be more. This is the usual pattern when the market enters the be- ginning of a possible distributive phase. Erratic fluctuations are necessary both at the top aDd bottom of the market. From a technical viewpoint, in no other way can a distributional top or an accumulation base be formed. 'An agile operator is justified in attempting to profit by these quick short , term moves provided he realizes the risks involved after a thirty-seven 'point advance in the industrial average in three months and does not become ,overextended. For the'intermediate trend speculator or the long term in- vestor, this type of operation is hazardous in the extreme. The advance from the July 13th low of 195. 1fO to the recent high of 232.50 can be divided into two phases. The first phase consisted of a rally ,from 195.40 to the August 24th high of 222.17, an advance of 26.77 points, , or roughly 14 in forty-one days. This letter strongly dvised the purchase of stocks in the 195-205 area and at that time recommendd a special list of purchases. Since the August high, I have been increasl1g1y cautious and have advised selling each recommended issue when its individual upside ob- jective was reached. From August 24th to now, this has resulted in sizeable profits in a great many of these recommended issues. The second phase of the advance consisted of an advance from the Aug- ust 24th high of 222.17 to the October 6th high'of 232.50, an advance of , 10.33 pOints, or less than 5. In addition, a considerable part of the re- cent rise in the average has been due to sharp run-ups in individual issues such as Chrysler and General Motors. It appears to me to be rather trite to say that a discussion of the ,averages is academic because one cannot buy the averages and regardless of their movement,profits can be made in individual issues. This is plausible ,When the averages move in a narrow range. It is not plausible, in my opi- nion, when the average moves decisively in either direction.This pre- . supposes an ability to select the 5 or less of the issues that will move counter to the general market. I do not pretend to claim such omnipotence. That is why I suggest following the general trend. The various averages are, I admit, far from a perfect gauge of the general market. However,until some better indicator is found,they are the best available. I believe the long range outlook is decidedly inflationary. However, ,from a short term point of view, the outlook may be deflationary because ;(1) regardless of the outcome of Korea, we are definitely going ahead with Iii long range defense program of huge proportions, (2) a continued rise in prices and wages,and demand for non-essentials would result in a much lar- ger cost for the defense program,(3) therefore, the government will do ,everything in its power through higher taxes, excess profits taxes,credit restrictions,increased reserve reqUirements, higher margins,allocations, , ,price roll-backs,etc., to hold down the inflationary potential, (4)tremendous ,buying of consumer's goods after Korea was stepped up so abruptly that it may have caused some saturation due to lessening of tension since our vic- ,tory in Korea,(5) as the effect of our defense spending will not be felt until mid-1951,this could result in a rather sharp temporary drop in busi- 'ness in the next few months. For roughly the next 2 years,it will be a tug- of-war between inflation and deflation.This will result,in my opinion,in a trading range not more than roughly 5 above the July high of 229.20 (or approximately 240l or more than roughly 5 below the July low of 195.40 (or approximately 185 . As the market approaches the upper part of the range,as now,I would be cautious.As the market approaches the lower part of range,I would be optimistic. Believe inflationary potentials will definitely out- weigh the deflationary efforts over the longer term.Therefore,lower part of range may not be too closely approached.However,it will be a trading market 'for a long period of time and not a one-way street. October 13, 1950 EDMUND W. TABELL Thil mClmorudum Is not to b. conltn…d a. an off.r or solicitation of off…. to buy or lell any .ecuritie. From time to time Walston, Hoffman & Goodwin may have an Interest in lome or all of the lecurltles mention.d herein, The foregoing material hal been prepared by u. a. a matter of information only It is baled upon informlltlon belieyed reliable but not n.cenarll., complete, Is not guuanteed al aCCurate or flnlll, and II not lnt.nded to forecl05e indClpendent lnqlliry. . .. ,,../…….. -,. , f, ….