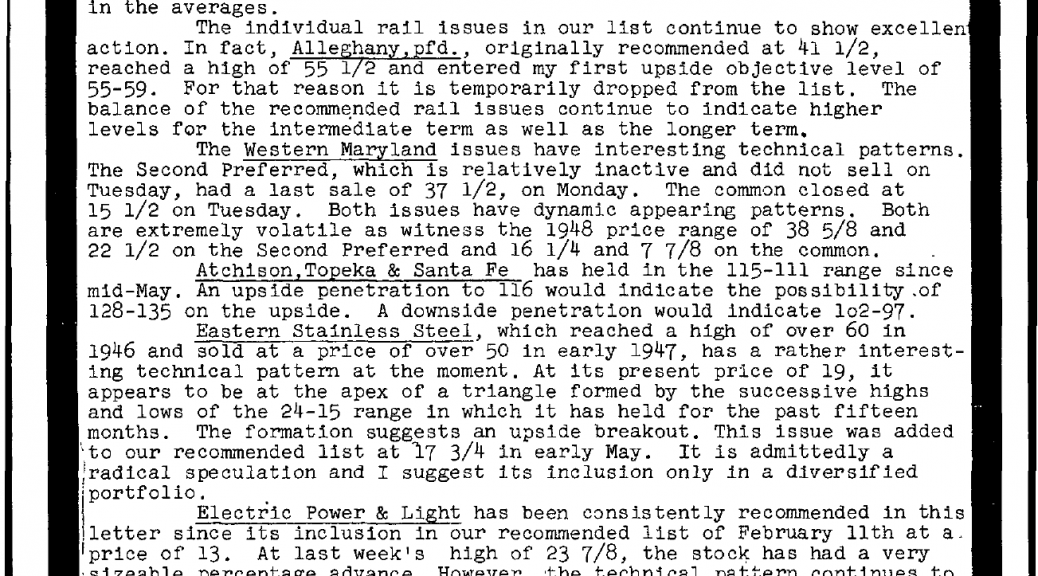 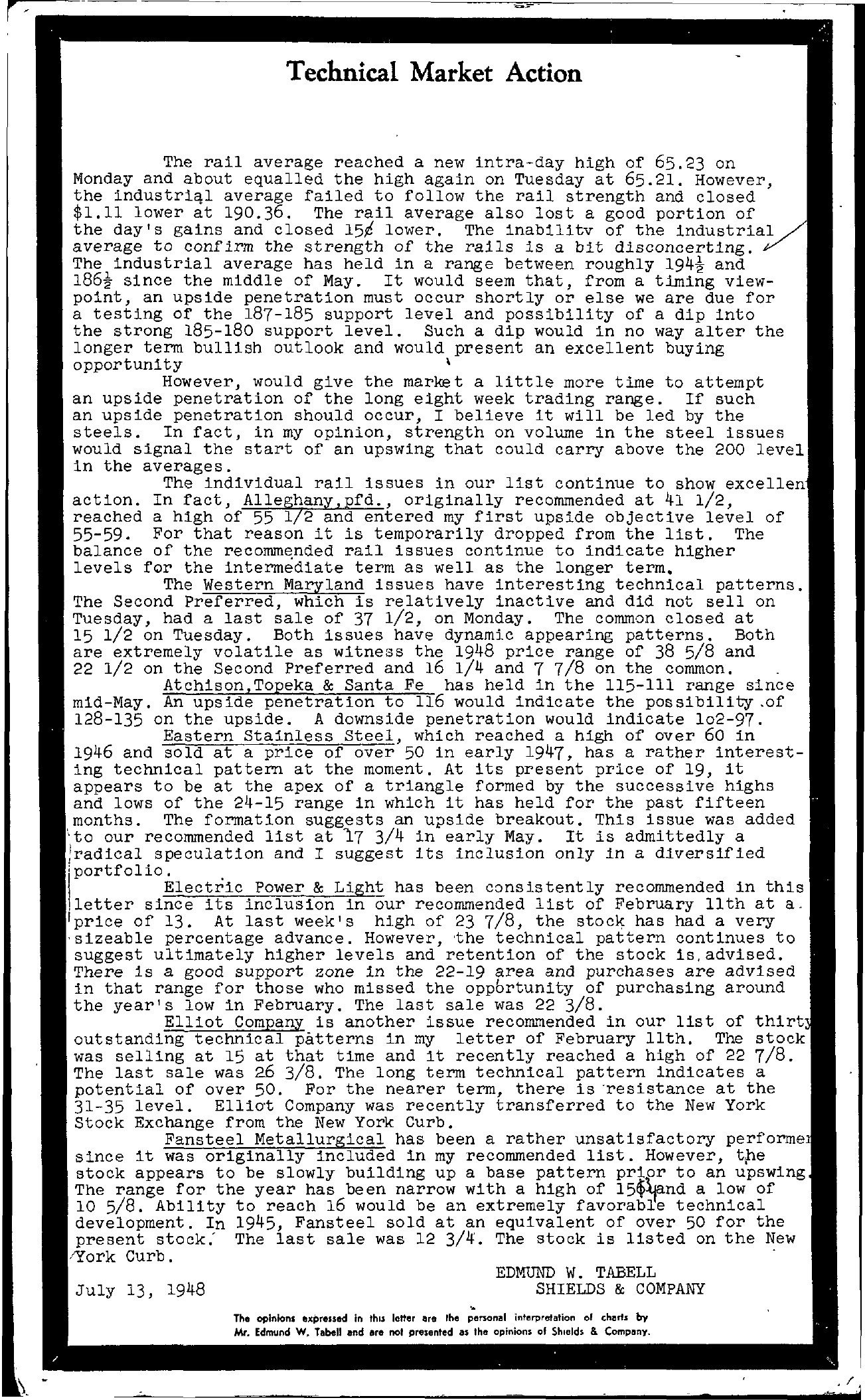 Technical Market Action The rail average reached a new intra-day high of 65.23 on Monday and about equalled the high again on Tuesday at 65.21. However, the industriql average failed to follow the rail strength and closed 1.11 lower at 190.36. The rail average also lost a good portion of the day's gains and closed 15i lower. The inabilitv of the industrial average to confirm the strength of the rails is a bit disconcerting. The industrial average has held in a range between roughly 194 and 186 since the middle of May. It would seem that, from a timing view- point, an upside penetration must occur shortly or else we are due for a testing of the 187-185 support level and possibility of a dip into the strong 185-180 support level. Such a dip would in no way alter the longer term bullish outlook and would present an excellent buying opportunity \ However, would give the market a little more time to attempt an upside penetration of the long eight week trading range. If such an upside penetration should occur, I believe it will be led by the steels. In fact, in my opinion, strength on volume in the steel issues would signal the start of an upswing that could carry above the 200 level in the averages. The individual rail issues in our list continue to show action. In fact, Alleghany,pfd., originally recommended at 41 1/2, reached a high of 55 1/2 and entered my first upside objective level of 55-59. For that reason it is temporarily dropped from the list. The balance of the recommnded rail issues continue to indicate higher levels for the intermediate term as well as the longer term. The Western Maryland issues have interesting technical patterns. The Second Preferred, which is relatively inactive and did not sellon Tuesday, had a last sale of 37 1/2, on Monday. The common closed at 15 1/2 on Tuesday. Both issues have dynamic appearing patterns. Both are extremely volatile as witness the 1948 price range of 38 5/8 and 22 1/2 on the Second Preferred and 16 1/4 and 7 7/8 on the common. Atchison,Topeka & Santa Fe has held in the 115-111 range since mid-May. An upside penetration to 116 would indicate the possibility.of 128-135 on the upside. A downside penetration would indicate 102-97. Eastern Stainless Steel, which reached a high of over 60 in 1946 and sold at a price of over 50 in early 1947, has a rather interest- ing technical pattern at the moment. At its present price of 19, it appears to be at the apex of a triangle formed by the successive highs and lows of the 24-15 range in which it has held for the past fifteen months. The formation suggests an upside breakout. This issue was added 'to our recommended list at 17 3/4 in early May. It is admittedly a !radical speculation and I suggest its inclusion only in a diversified portfolio. . I Electric Power & Light has been consistently recommended in this !letter since its inclusion in our recommended list of February 11th at a, Iprice of 13. At last week's high of 23 7/8, the stoc has had a very 'sizeable percentage advance. However, 'the technical pattern continues to suggest ultimately higher levels and retention of the stock is,advised. There is a good support zone in the 22-19 area and purchases are advised in that range for those who missed the oppbrtunity of purchasing around the year's low in February. The last sale was 22 3/8. Elliot Company is another issue recoended in our list of outstanding technical patterns in my letter of February 11th. The was selling at 15 at that time and it recently reached a high of 22 The last sale was 26 3/8. The long term technical pattern indicates a potential of over 50. For the nearer term, there is -resistance at the 31-35 level. Ellio't Company was recently transferred to the New York Stock Exchange from the New York Curb. Fansteel Metallurgical has been a rather unsatisfactory since it was originally included in my recommended list. However, tpe stock appears to be slowly building up a base pattern prif to an upswing The range for the year has been narrow with a high of 15nd a low of 10 5/8. Ability to reach 16 would be an extremely favorable technical development. In 1945, Fansteel sold at an equivalent of over 50 for the present stock.' The last sale was 12 3/4. The stock is listed on the New ,'York Curb. EDMUND W. TABELL 13, 1948 SHIELDS & COMPANY '. The opinion, expressed in IhL! letter ,are the personal interpretation of chllrts by Mr. Edmund W. Tabel! lind Bre no' preJented as the opinions of Shields & Company.