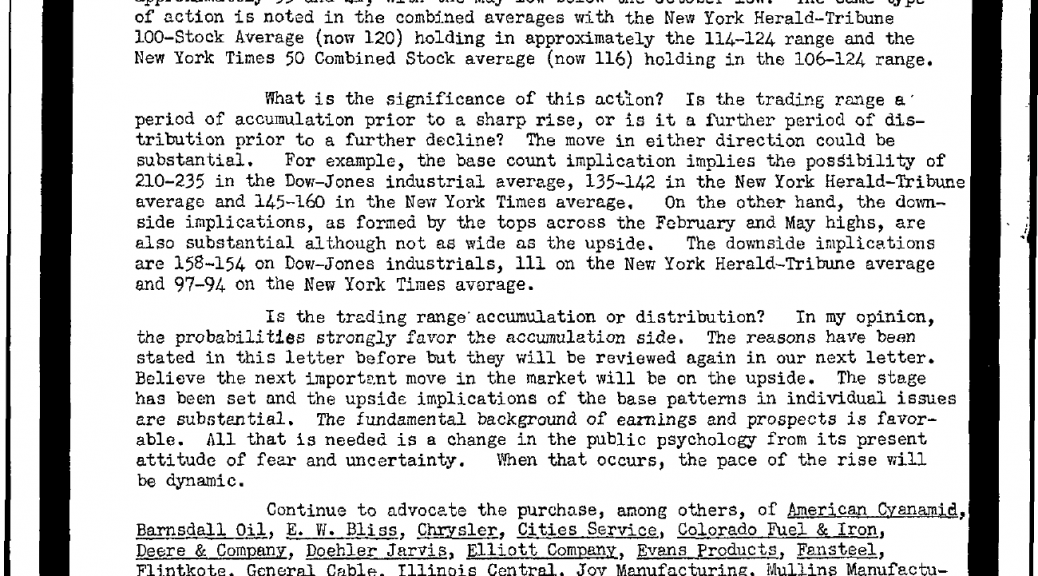 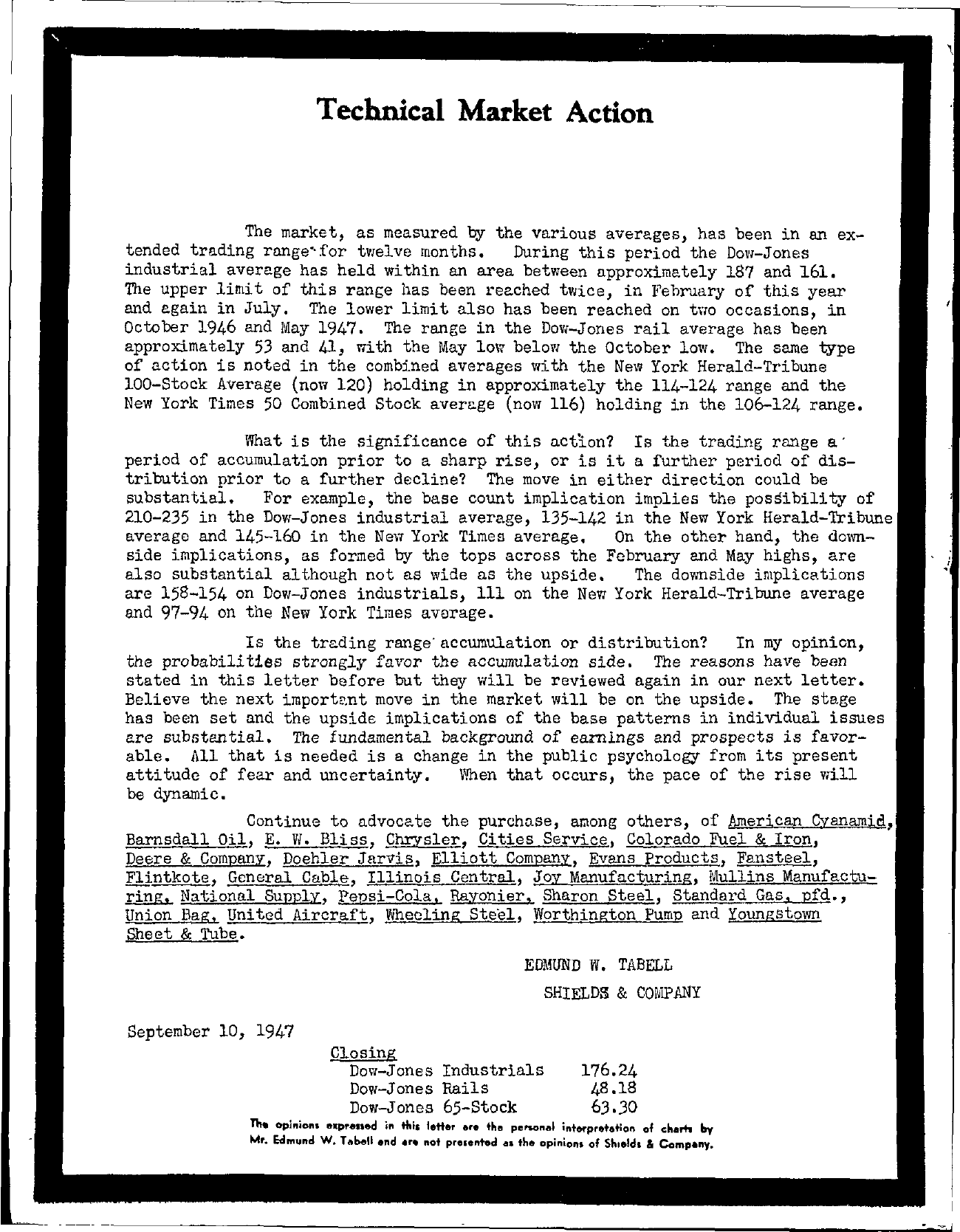 Technical Market Acdon The market, as measured by the various averages, has been in an extended trading range for twelve months. During this period the DOVi-Jones industrial average has held within an area between approximately 187 and 161. The upper limit of this ranbe has been reached twice, in February of this year and again in July. The lower limit also has been reached on two occaSions, in October 1946 and May 1947. The range in the Dow-Jones rail average has been approximately 53 and 41, with the May low below the October low. The same type of action is noted in the combined averages with the New York Herald-Tribune 100-Stock Average (now 120) holding in approximately the 114-124 range and the New York Times 50 Combined Stock average (now 116) holding in the 106-124 range. What is the significance of this acton Is the trading range a' period of accumulation prior to a sharp rise, or is it a further period of distribution prior to a further decline The move in either direction could be substantial. For example, the base count implication implies the possibility of 210-235 in the Dow-Jones industrial average, 135-142 in the New York Herald-Tribune average and 145-l60 in the New York Times average. On the other hand, the downSide implications, as formed by the tops across the February and May highs, nre also substantial although not as wide as the upSide. The downside implications are 158-154 on DOVi-Jones industrials, III on the NeVI York Herald-Tribune average and 97-94 on the New York Times aV8rage. Is the trading range'accumulation or distribution In my opinion, the probabilities strongly favor the accumulation Side. The reasons have been stated in this letter before but they will be reviewed again in our next letter. Believe the next imporknt move in the market will be on the upSide. The stage has been set and the upside implications of the base patterns in individual issues are substantial. The fundamental background of earnings and prospects is favorable. All that is needed is a change in the public psychology from its present atti tude of fear and uncertainty. When that occurs, the pace of the rise will be dynamic. Continue to advocate the purchase, aong others, of bm&r1Qgn. Barnsdall Oil, E. w. BliSS, Chrysler, Cities Service, Colorado Fuel & Iron, Deere & Company, Doehler JarVis, Elliott Company, Evans Products, Fansteel, Flintkote, General Cable, IllinoiS Central, Joy Manufacturing, Mullins Manufacturing, National Supply, Pepsi-Cola, Rayonier, Sharon Steel, Standard Gas, pfd., Union Bag, United Aircraft, necling Steel, Worthington Pump and Youngstown Sheet & Tube. EO!!UND W. TABELL SHIELDS & COMPANY September 10, 1947 Closing Dow-Jones Industrials Dow-Jones Rails 176.24 48.18 Dow-Jones 65-Stock 63.30 Tlt oplnion, elpt'et.ed in this letter .r. the pel5OnAI intewpretalon of char. by Mr. Edmund W. labell end .r. not presented !II the opinions of Shield, & Campany.