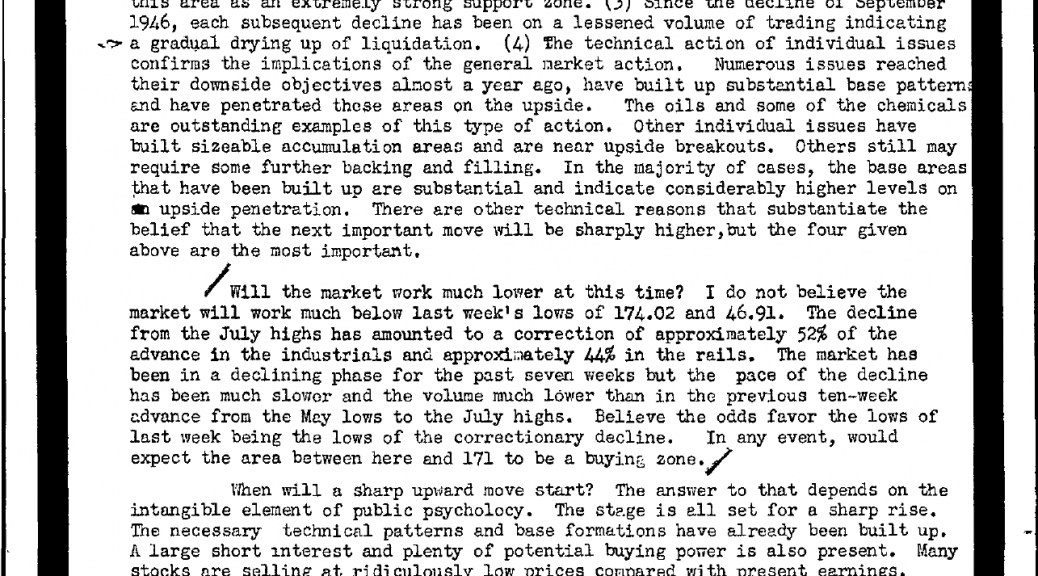 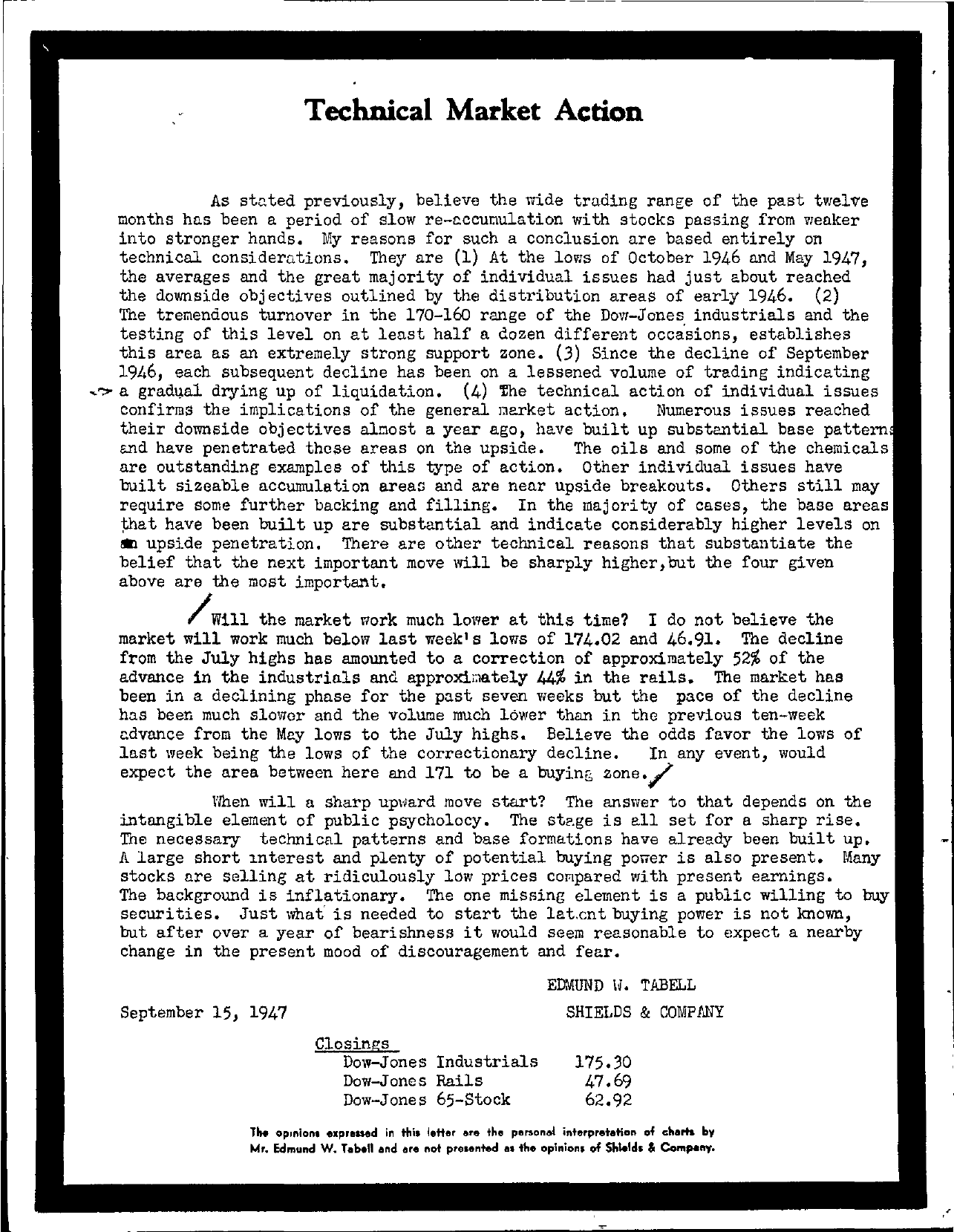 Technical Market Action As stc.ted previously, believe the wide trading range of the past twelve months has been a period of slow re-c.ccunulation with stocks passing from vleaker into stronger hands. My reasons for such a conclusion are based entirely on technical considerations. They are (1) At the lows of October 1946 and May 1947, the averages and the great majority of individual issues had just about reached the downside objectives outlined by the distribution areas of early 1946. (2) The tremendous turnover in the 170-160 range of the Dovr-Jones industrials and the testing of this level on at least half a dozen different occasions, establishes this area as an extremely strong support zone. (3) Since the decline of September 1946, each subsequent decline has been on a lessened volume of trading indicating a gradual drying up of liquidation. (4) e technical action of individual issues confirms the implications of the general nerket action. Numerous issues reached their downside objectives alnost a year ago, have built up substantial base pattE,rn, and have penetrated thcse areas on the upside. The oils and some of the chemicals are outstanding examples of this type of action. Other individual issues have built Sizeable accumulation areao and are near upside breakouts. Others still may require some further backing and filling. In the majority of cases, the base areas at have been built up are substantial and indicate considerably higher levels on 811 upside penetration. There are other technical reasons that substantiate the belief that the next important move will be sharply higher,but the four given above are the most important. IWill the market work much lower at this time I do not believe the market will work much below last weekI 5 lows of 174.02 and 46.91. The decline from the July highs has amounted to a correction of approximately 52 of the advance in the industrials and approxir.lately 44 in the rails. The market has been in a declining phase for the past seven weeks but the pace of the decline has been much slov7or and the volume much lower than in the previous ten-week cdvrunce from the May lows to the July highs. Believe the odds favor the lows of last week being the lows of the correctionary decline. In any event, would expect the area between here and 171 to be a buying zone. When will a sharp upard move start The answer to that depends on the intangible element of public psycholocy. The stge is all set for a sharp rise. The necessary technical patterns and base formations have already been built up. A large short 1nterest and plenty of potential buying po..er is also present. Many stocks are selling at ridiculously low prices cOl'lpared with present earnings. The background is inflationarY. The one missing element is a public willing to buy securities. Just what' is needed to start the lat.cnt buying power is not known, but after over a year of bearishness it would seem reasonable to expect a nearby change in the present mood of discouragement and fear. September 15, 1947 EDMUND II. TABELL SHIELDS & COMPANY Closings Dow-Jones Industrials Dow-Jones Rails Dow-Jones 65-Stock 175.30 47.69 62.92 TM opinions expreued in thi' letter are the persona! interpretation of charta by Mr. Edmund W. T.b.n and lire not prelented 1 the opinion. of Sht.ld, .. Company.