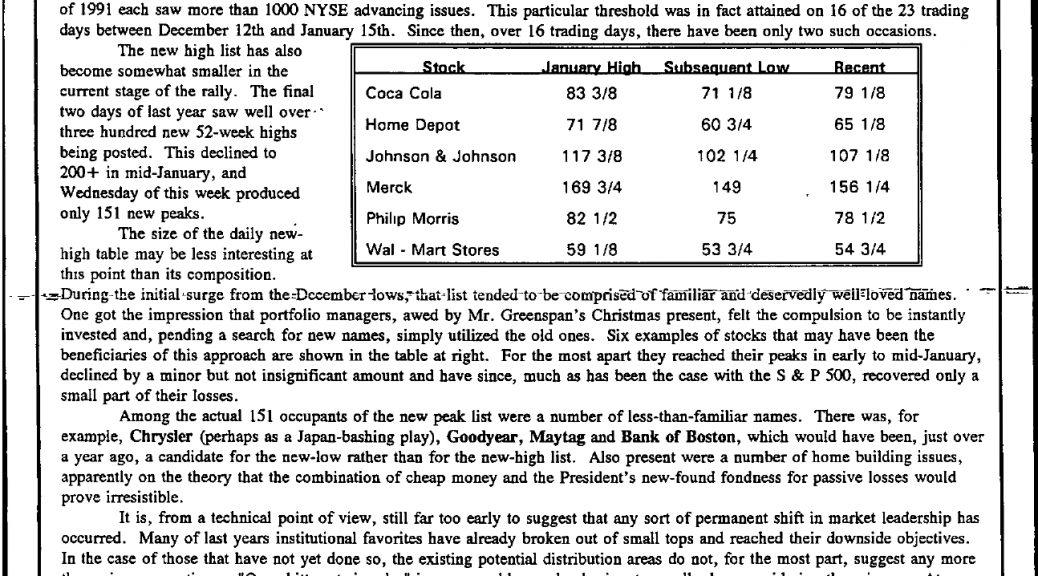 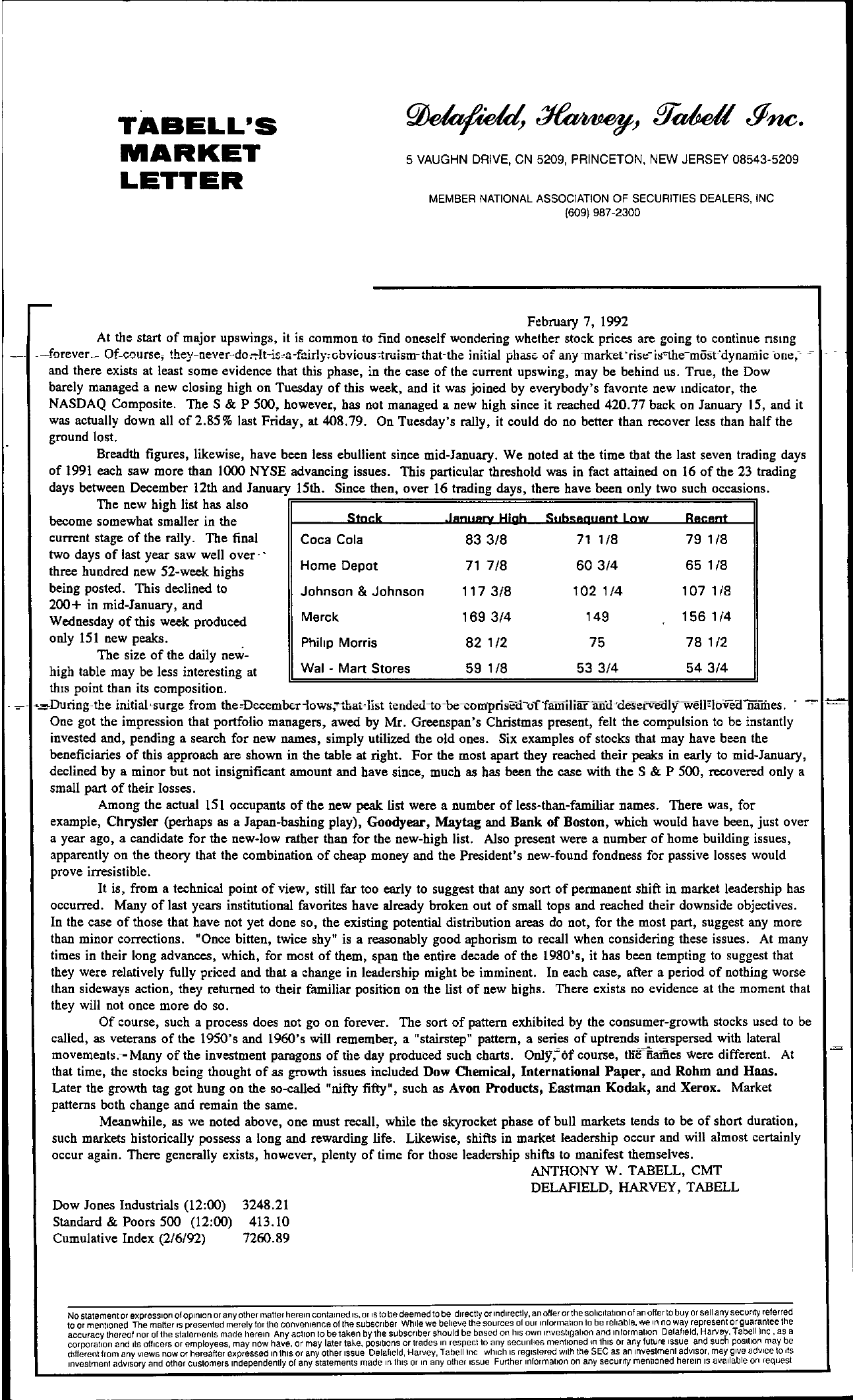 TABELL'S MARKET LETTER 5 VAUGHN DRIVE, CN 5209, PRINCETON. NEW JERSEY 08543-5209 MEMBER NATIONAL ASSOCIATION OF SECURITIES DEALERS. INC 16091987-2300 February 7, 1992 At the start of major upswings, it is common to find oneself wondering whether stock prices are going to continue rising forever. Of course, they never do it is a farily obvious truism that the initial phase of any market rise is the most dynamic one, barely managed a new shining high on Tuesday of this week, and it was joined by everybodys favorite new indicator, the NASDAQ Composite. The S&P 500, however, has not managed a new high since it reached 420.77 back on January 15, and it was actually down all of 2.85 last Friday, at 408.79. On Tuesdays rally, it could do no better than recover less than half the ground lost. Breadth figures, likewise, have been les ebullient since mid-January. We noted at the time that the last seven trading days of 1991 each saw more than 1000 NYSE advancing issues. This particular threshold was in fact attained on 16 of the 23 trading days between December 12th and January 15th. Since then, over 16 trading days, there have been only two such occasions. The new high list has also become somewhat smaller in the current stage of the rally. The final two days of last year saw well over three hundred new 52-week highs being posted. This declined to 200 in mid-January, and Wednesday of this week produced only 151 new peaks. The size of the daily new-high table may be less interesting at this point than its composition. During the initial surge from the December lows, that list tended to be comprised of familiar and deservedly well-loved names. One got the impression that portfolio managers, awed by Mr. Greenspans Christmas present, felt the compulsion to be instantly invested and, pending a search for new names, simply utilized the old ones. Six examples of stocks that may have been the beneficiaries of this approach are shown in the table at right. For the most apart they reached their peaks in early to mid-January, decline by a minor but not insignificant amount and have since, much as has been the case with the S&P 500, recovered only a small part of their losses. Among the actual 151 occupants of the new peak list were a number of less-than-familiar names. There was, for example, Chrysler (perhaps as a Japan-bashing play), Goodyear, Maytag, and Bank of Boston, which would have been, just over a year ago, a candidate for the new-low rather than for the new-high list. Also present were a number of home building issues, apparently on the theory that the combination of cheap money and the Presidents new-found fondness for passive losses would prove irresistible. It is, from a technical point of view, still far too early to suggest tat any sort of permanent shift in market leadership has occurred. Many of last years institutional favorites have already broken out of small tops and reached their downside objectives. In the case of those that have not yet done so, the existing portential distribution areas do not, for the most part, suggest any more than minor corrections. once bitten, twice shy is a reasonably good aphorism to recall when considering these issues. At many times in their long advances, which, for most of them, span the entire decade of the 1980s, it has been tempting to suggest that they were relatively fully priced and that a change in leadership might be imminent. In each case, after a period of nothing worse than sideways action, they returned to their familiar position on the list of new highs. There exists no evidence at the moment that they will not once more do so. Of course, such a process does not go on forever. The sort of pattern exhibited by the consumer-growth stocks used to be called, as veterans of the 1950s and 1960s will remember, a stairstep pattern, a series of uptrends interspersed with lateral movements Many of the investment paragons of the day produced such charts. Only, of course, the names were different. At that time, the stocks being thought of as growth issues included Dow Chemical, International Paper, and Rohm and Haas. Later the growth tag got hung on the so-called nifty fifty, such as Avon Products, Eastman Kodak, and Xerox. Market patterns both change and remain the same. Meanwhile, as we noted above, one must recall, while the skyrocket phase of bull markets tends to be of short duration, such markets historically possess a long and rewarding life. Likewise, shifts in market leadership occur and will almost certainly occur again. There generally exists, however, plenty of time for those leadership shifts to manifest themselves. Anthony W. Tabell, CMT Delafield, Harvey, Tabell No statement or expression of opinion or any other matter herein contained is, or is to be deemed to be, directly or indirectly, an offer or the solicitation of an offer to buy or sell any security referred to or mentioned. The matter is presented merely for the convenience of the subscriber. While we believe the sources of our information to be reliable, we in no way represent or guarantee the accuracy thereof nor of the statements made herein. Any action to be taken by the subscriber should be based on his own investigation and information. Delafield, Harvey, Tabell Inc. as a corporation and its officers or employees, may now have, or may later take, positions or trades in respect to any securities mentioned in this or any future issue, and such position may be different from any views now or hereafter expressed in this or any other issue. Delafield, Harvey, Tabell Inc., which is registered with the SEC as an investment advisor, may give advice to its investment advisory and other customers independently of any statements made in this or in any other issue. Further information on any security mentioned herein is available on request. Stock; January High; Subsequent Low; Recent Coca Cola; 83 3/8; 71 1/8; 79 1/8 Home Depot ; 71 7/8; 60 3/4; 65 1/8 Johnson and Johnson 117 3/8; 102 1/4 ; 107 1/8 Merck ; 169 3/4 ; 149; 156 1/4 Philip Morris; 82 1/2 ; 75 ; 78 1/2 Wal-Mart Stores; 59 1/8 ; 53 3/4 ; 54 3/4